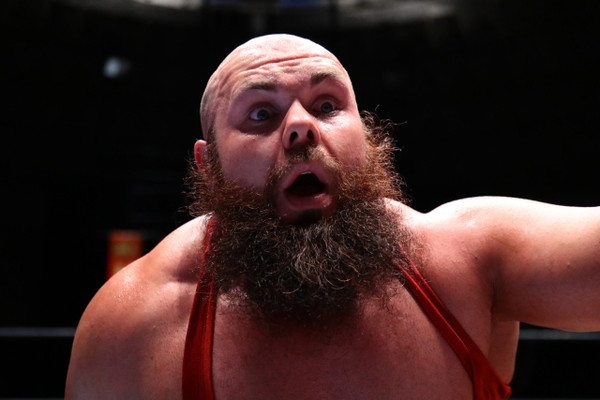 An opener that had no right to be as good as it was. Sure, it had only a few minutes but each portion of the match felt distinct and important. The beginning saw Henare, New Japan’s newest young lion, start the match and look impressive whilst taking damage and doling out some pain of his own. This will sound insane but stay with me. Henare reminds me of Takashi Sugiura. No, of course he’s not the level of worker Sugiura is now, and he may never reach that level but from a purely aesthetic standpoint, the look, feel and way about him in the ring reminds me of Sugiura. The second portion of the match saw Ospreay dazzle briefly but again continue the theme of being a lesser member of the roster, at one point on the verge of tapping to a Ryusuke Taguchi arm bar. Finally, Taguchi gave his team the win ducking a series of Rocky Romero enzuigiri attempts before locking on the amazingly-named Oh My & Garankle ankle lock for the win. This was a notable result as it continued a talking point from last week’s VOW flagship podcast that despite being a New Japan-linked worker for over a decade, Romero takes the falls for his team in protection of Beretta. All in all, a super fun opener to kick us off tonight. ***

Before the match, Yoshitatsu got on the mic to discuss the results of his Twitter “poll” (RT or FAV even though they have actual polls on Twitter but you know, it’s Yoshi and he can’t do anything right). In the midst of his speech, Captain New Japan attacked him and became a member of the Bullet Club. This is a new chapter for Captain New Japan who has now become THE BONE SOLDIER. NR

Please let Tenzan and Kanemitsu be a thing. The juxtaposition of the grizzled New Japan veterans teaming with the spunky young lion Kanemitsu is incredible. 22 years his elder, Tenzan was already wrestling for two years before Kanemitsu was even born. Speaking of my man Kanemitsu, he was solid here taking the abuse of Honma and Makabe while Tenzan took the night off. At one point, Kanemitsu endured a sickening double clothesline from Great Bash Heel. The youngster didn’t give up and actually small packaged Honma for a super close two count. This enraged Honma who hit Kanemitsu with a kokeshi and to add insult to injury made him tap with a Boston Crab. **

This won’t be everyone’s cup of tea but if you’re a fan of hard kicks, stiff chops, grunting and a much more deliberate New Japan tag match than we’re used to in 2016, you’ll love it as much as I did. This match could have been plopped down on a 2002 NJPW card and not seem out of place at all. Even the finish—Nakanishi tapping to O’Reilly’s armbar while Fish kicked him in the back—felt wholly different from finishes we see these days. Nagata was mostly a non-factor and Nakanishi slipped twice while attempting a top-rope cross body but overall, this was fun. **3/4

DAVID FINLAY IS A CHAMPION! DAVID FINLAY IN A CHAMPION! Just weeks after officially becoming a rostered member of New Japan Pro Wrestling, Finlay, the former young lion—now sporting hideous cheetah/leopard (I know there’s a difference, don’t @ me) trunks—is atop the world. Well, the NEVER world. Okay, the NEVER six-man tag titles world. Shut Up, this is a big deal, okay?

Of course, the very fact that Finlay is in the match is a result of Matt Sydal’s continued travel woes. If they are as serious as believed, it could be a long time before we see Sydal back in a New Japan ring.

Decision aside, the match was a ton of fun with The Bucks in full-on high-flyer mode, Ricochet working like a man possessed and Kojima is just the goddamn best, he was so good in this match. I loved the dynamic of Ricochet, Finlay and Kojima—three men that would never hang out in real life—unifying for one goal. You could see them slowly but surely becoming more comfortable with one another after some uneasiness at the start of the match and by the end, they were a well-oiled machine, each with their own skill set, personality and contribution. I’ll always prefer branded tag teams, guys that look alike, wear the same thing, etc. but sometimes a good thrown together team that brings it together like this is special. The crowd went absolutely nuts when the triad won, making our complaints about this title and how it’s used seem rather stupid. ***¼

After the match, Finlay laid out a challenge to the Young Bucks saying Ricochet and him (Sydal may not be coming back, folks) want something the Bucks have (the IWGP Junior Tag Titles). He wasn’t sure when or where, but they were going to challenge. Ricochet added a SUCK IIIIT for good measure.

The first downer of the night, this match felt needlessly long and pointless throughout. The banal work by many others in this match—most clearly taking the night off after a long tour—made all the sense in the world when Tama Tonga pinned Mark Briscoe for the win. This, of course, continues to set up a Guerrillas of Destiny/Briscoes match that few people in the world want to see. *1/2

While this match was nothing more than random filler match to get these guys on the card at the end of the tour, a few things stood out.

One, Tanahashi is no doubt lying in the weeds ready for his reignition. It’s easy to forget he’s even on the roster until you see him tag in during this match hit a few moves and bounce for the next 10 minutes. It’s a smart strategy that allows him to heal his body up and perform at his best when the moment arises. I’m all in favor of this even if it’s a little jarring.

Two, Juice Robinson is getting it. We can’t define it but whatever it is, Juice now has it after not having it for much of his early New Japan tenure. The crowd is finally connecting to him and he’s working at a much faster pace, no longer cautious of his every move. The selling that made all of us fall in love with post-push NXT CJ Parker finally looks alive again and he really enhanced this match. In particular, the sequences between SANADA and Juice have me so clamouring for a singles matches between the two.

Which leads me to my third and final guy, SANADA. Dude is going to be a main event before long. It may not even come next year but when it comes, it’ll be a sight to be seen. SANADA was so good in this match and the potential for him as a babyface pillar of New Japan Pro Wrestling increases by the day. ***

This wasn’t a particularly great match but the dynamic of seeing some of NOAH’s stars near the top of a New Japan card was fun. Kotoge & Harada, arguably wrestling’s best tag team over the last two years were definitely the highlight of the match showcasing not only their dynamic work but their best in the world babyface hamming.

One thing missing from this match was the intensity of recent NJPW vs. NOAH encounters. Too often this match felt like more of a match that featured NOAH wrestlers rather than an actual battle for supremacy. Regardless, Okada and Marufuji had a few nice sequences as they build to their King of Pro-Wrestling match.


In a somewhat surprising move, Harada took the fall, pinned by YOSHI-HASHI of all people. Obviously the goal here is keep YOSHI-HASHI strong after his loss to Omega and Harada, a junior, loses instead of a lesser heavyweight like Yano. Kotoge would have made sense as well but he’s the GHC Junior Champ. Harade is only ½ of the Junior Heavyweight Tag Champions, with Kotoge, of course. Also, Yano is a GHC Tag Title holder.

Naito has become the 10th person to hold the title, ending the 98 day reign of Michael Elgin. There may be a segment of the audience that thinks the IC Title is beneath Naito but that’s ignorant to where NJPW slots and how they use the title. Shinsuke Nakamura is a five-time IC Champ not because he couldn’t hang as a IWGP Heavyweight Title holder but rather THAT he can draw while being the “secondary” champion. That torch is now past to Naito who, along with Elgin, drew 5,432 (no vacancy per @reasonjp) to Kobe for this show. That’s down a little under 700 fans from last year’s Destruction in Kobe, a much stronger all-around show. That number (5,432) is a feather in both Elgin and Naito’s cap but proves what has become clear to many this year: Naito is a draw. Now as champion, Naito will find himself in many major show main events, relied upon as if he’s the heavyweight champ.

Now to the match — it was fantastic. It’s not a Match of the Year level contest (though I wouldn’t be shocked to see it pop up on a few lists) but it was special. Primarily focused on Naito working over Elgin’s knee, the match took many twists and turns along the way with a few spots that had me geniunelly thinking Elgin was going to pull out the win. It’s hard to give credit to one man for carrying this match or standing out as both delivered all-time great performances. This may have been my favorite Naito match since his NEVER Title matches back in 2013.

The only aspect of the match I disliked saw Los Ingobernables run down and start beating down on Elgin. Sure, it was only to build up some New Japan guys, including KUSHIDA to run down for the save which led to an awesome spot that saw Elgin toss BUSHI into his stablemates. It worked in the moment and probably didn’t bother most people as much as it did me.

Either way, it didn’t factor into the finish which is always a plus for me. The finish was an absolute work of art. Elgin had begun grabbing the momentum and looked like he was primed to put Naito away. The two traded moves back and forth including a beautiful reverse moonsault by Naito that dropped Elgin right on the top of his head. #BigMike set up for the Elgin Bomb when out of absolutely nowhere Naito hit the Destino (this looked incredible, btw). Naito could have attempted a pin here but smartly (and because he’s an ungovernable dickhead), he hit Elgin with a proper Destino for the victory and the title win. Awesome. ****1/2

NJPW closed out their Destruction tour in grand fashion with Destruction in Kobe. An all-around fantastic show with very little bad, a lot good and a great main event. 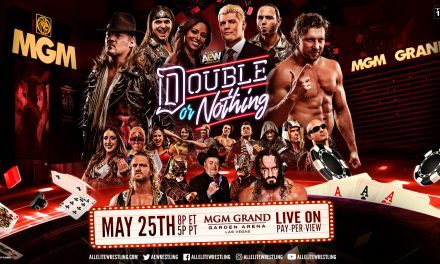 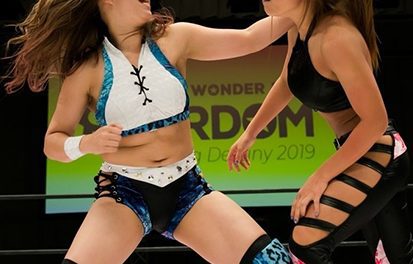