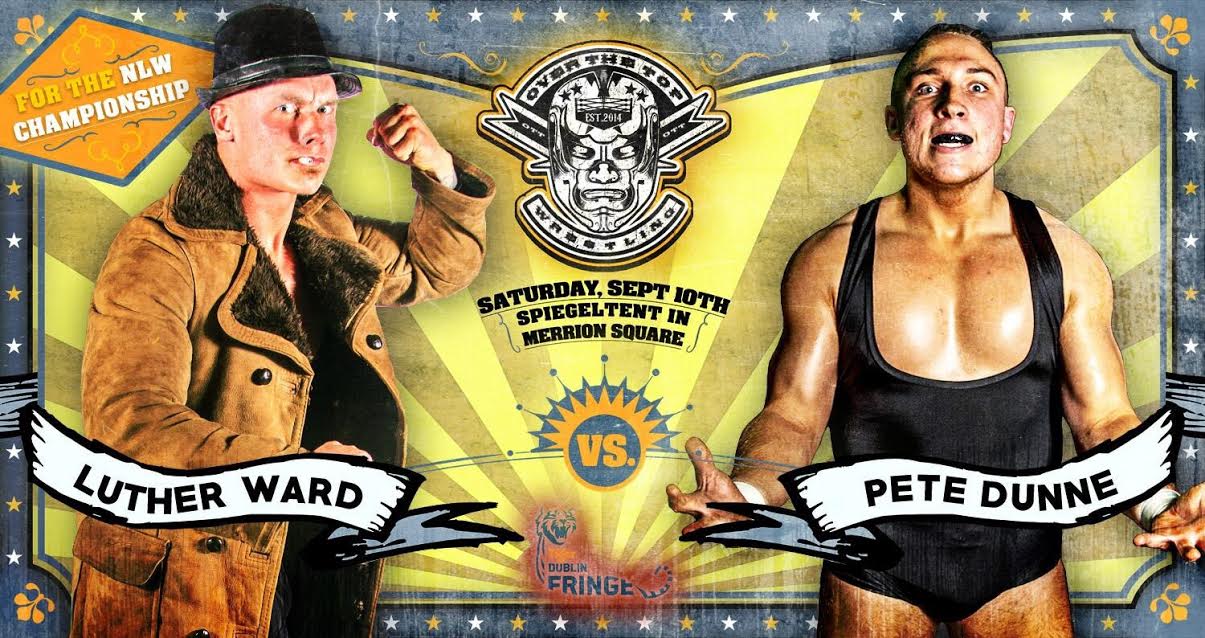 This was OTT’s second year running and selling out a show at the Dublin Fringe festival. Approximiately 600 people packed world-famous Spiegeltent which is an absolutely stunning venue to watch wrestling in.

“Mad respect for the door staff handing out orange wristbands so we were all technically supporting KOTN.” –@baecchio

This was an inter-gender tag match with all competitors legal to go against each other. The crowd where well into this from the entrances onwards.  A lot of comedy spots, Charlie Garret working a good chunk of the match with his arse exposed. Some sloppy bits here and there wrestling wise. I really didn’t like this match, the comedy didn’t land with me but heard from 2 separate OTT first timers it was their favorite on the show. Commentary on the VOD was pretty bad for this match especially the comments made about the female wrestlers. Charlie hit Martina with a stiff (or perhaps very well worked!) punch and Katie got the pinfall victory.

This was a solid 10 minute match that looked so much better than the opener. Logan again doing a great job taking on the import wrestler but for the first time a smaller man than himself.  Travis looked really good in this match using his speed and aggression to get the better of Logan. Logan hit his big Lariat for the finish but surprisingly Travis managed to kick out.  The New Zealander picked up the win with a swift kick from the top rope to the side of Logan’s head.

The Kings Of The North are the team everybody loves to hate in OTT VS The Mega Nasties/ Team Mega a reuniting team from NWA Ireland many years ago, nostalgia that was lost on about 90% of the crowd but two men nonetheless that are very popular with the OTT crowd and have had their beards cut by KOTN.  Team Mega go straight for the Kings showing that they are not worried about their 2 on 3 disadvantage but there is also an air of whether the Beast and Shape can co-exist as they feuded previously in OTT. The Kings quickly isolate Shape and he gets beaten down by all 3 members of the KOTN with quick tags in and out.  The beast eventually gets tagged in and gets on the offence but again is over powered by all 3 KOTN and isolated. The Kings jeer Shape on the outside. When it looks like the Kings have the Beast beaten ,Justin makes a late save and Team Mega get the better of the Kings, Justin picks Bonesaw up for Beast to spear him but he himself get shoved into Bonesaw by Corvin on the outside and Beast hits Shape with the spear before Dunkan picks up the pin victory. It was your classic miscommunication spot capitalised on by the heels.

B Cool and Sammy D came out behind the Kings who are celebrating, low blow Bonesaw and Corvin and throw Dunkan back into the ring. All four gang up on Dunkan and he gets patches shaved out of his hair by Shape.

This match was only OK. I was expecting the Kings Of The North to absolutely destroy the Mega Nasties 3 on 2. I guess it kept everybody looking strong but didn’t do much for the feud or make me want to see the story continue.

“The MegaNasties barely cut any of Dunkans hair off. They were more careful than the Grafton Barbers” – @JamieOD

Smile came out and asked for it to become a triple treat match which was agreed to, then the lights went out and Scurlls theme song played. The crowd went absolutely nuts, biggest pop of the night.

This match was great, it was so hard to keep up with, with so much happening. Some big high spots with End doing a beautiful moonsault to the outside followed up with lightning fast Essa Rios dive from Smile. Everybody was going after everybody else until it appeared End and Scurll had formed a team. They hit Haskins and Smile with a double powerbomb and then tried for a second but got caught with double hurricanranas.

The finish came when Smile was going for the offence on End bouncing off the ropes but got caught mid air in the Chicken Wing by Scurll . Smile tapped almost instantly.

Marty cuts a promo boasting that he’s yet again victorious over Ryan and that he may have beaten him in a tag match but he was not the one who was pinned and that Ryan could never beat him.

Smile’s promo was great here, playing off his “yes we can” catchphrase and how Ryan is good enough and the crowd were right behind him. As popular as Marty Scurll is everywhere including Dublin, Ryan Smile is OTTs underdog and the majority of the crowd want to see him beat Marty Scurll and prove that he is good enough/in the same league as the other great Britsh indy guys.

After this, Haskins, Smile and End all shake hands and the crowd get to say goodbye to Tommy who’s on his way to WWE.

This was a highly anticipated grudge match with Jordan Devlin splitting Big Damo open with a chair at “A matter of pride” to join the Social Elite. Damo was out for revenge here. Devlin brought Charlie Garrett out in his corner to even the odds against Big Damo.  There was some vicious looking stuff here with Jordan being chopped through the floor seats and Damo diving into them after him, these were like dining room hard wood chairs not the usual folding ones. Jordan landed a few punches on Damo that didn’t seem to phase him and he got thrown around by the bigger man with Damo hitting some speedy high impact moves powerbomb/elbow/senton. At times it seemed like giant Damo was moving faster than the smaller heel which was unusual in these types of matches but Jordan looked tough and like he could take the punishment.

The match ends as Damo squashes the referee by accident and with interference from Garret Devlin manages to get the win by low blow and a springboard DDT. Damo gets his revenge on Garrett before taking the mic. Damo says he’s proud of OTT and the crowd for making this happen in Ireland and is sad it wasn’t around when he was starting off . The crowd said goodbye to Damo who is also on his way to WWE. I was disappointed with this match live as I didn’t think Jordan looked aggressive enough & only got a sneaky win but enjoyed it a lot more on second viewing on the VOD.

“Jordan Devlin looked impressive as all hell against Big Damo like. That guy’s gonna be a big deal” – @bme_87

This was a rematch from Scrappermania 2 this past March. Both men getting cheered from opposing sections of the crowd.  Ward threw Dunne around before slowing it down with an arm bar and some strikes, Dunne took advantage of this change in pace and made his comeback. The two men looked evenly matched with some deafening chops exchanged, and finger biting from both sides.

There were duelling chants of “Lets go Luther” / “Brusierweight” showing the crowd gaining respect for the heel Dunne.

Luther hit a reverse Huricanrana and gets Dunne in the Crossface that made him tap out at Scrappermania but Dunne is able to compose himself this time and manages to roll over. He quickly hits Ward with a Tombstone and Drop Dead combo before getting the champion in his own Crossface finisher and making him Tap out.

Dunne and Ward seem to show each other respect. The crowd are all on their feet most, seem to be now cheering Pete Dunne. This was probably my favourite Luther Ward title defence. I really enjoyed the pace of the match, they did a lot in the 13 minutes they had for this.

I hope OTT will be back again at next years Fringe festival. It’s nice to go see the show once a year in the Spegieltent, the beauty of the tent didn’t come across as well on the VOD, it really is special but that being said I wouldn’t trade it full time for the grimey broken down Tivoli Theatre.  The atmosphere of the Tivoli is unmatched.

Commentary team was added for the VOD last month. I enjoyed them more on that one although I thought it improved as this show went on this time.

For me this is a rent not buy show. Fun show, well worth €6 to view but would probably never re-watch.

“This show was utter bullshit because nobody should ever kick out of the MIGHTY LARIAT of Logan Bryce. Riki Choshu is rolling in his bed (Because he doesn’t have a grave yet) But seriously- twas a fun show with a unique atmosphere compared to the usual. Highlight was the build to Marty Vs Ryan II” –@alan4L