Watching Every Gedo Match on the WWE Network If you’re anything like me, and you really should be, you listen to the VOW flagship podcast. In the past couple of weeks Rich and Joe mentioned a must see tag match between the Impact Players, Justin Credible and Lance Storm, and the World Class Tag Team, Gedo and Jado. After mentioning it twice, the pair finally convinced me to type “Gedo” into the WWE Network search gimmick and find the match. The search results turned up four matches and it just so happens that I had not seen any of those matches or if I have, it’s been quite a while since I last saw them. So let’s see what New Japan’s booker has to offer on the WWE Network.

I’m going through these chronologically so our first match is a singles match in WCW. In this one we’ve got a bit of a pudgy Gedo. This really puts into perspective how great of shape Gedo is in, even in his older age. On commentary, Mike Tenay does a great job breaking down both competitors and makes sure to point out that their paths have crossed before. Jericho hits Gedo with some hard strikes, which sends him to the outside to regroup and jaw at the fans. Gedo gets back in the ring and Jericho continues his aggressive attack. Jericho hits some particularly brutal looking chops on Gedo right before the tide in the match turns. Gedo plants Jericho with a powerslam as Heenan proclaims his support of the Japanese star. Jericho shows his power in this match by slamming Gedo to the mat to break up a sleeper hold and then follows that up with two powerbombs. A very scary moment comes when Jericho attempts a top rope standing Frankensteiner on Gedo, but doesn’t quite get it. It looks like Jericho lands on the top of his head and I’m amazed that he didn’t break his neck. He was so close to being Hayabusa with the way that fall looked. This doesn’t slow the match down at all though as Jericho goes for a dive to the outside and Gedo dropkicks him out of midair. There’s a second where I think that Gedo is going for the One Winged Angel, but he goes for some kind of crazy shinbreaker instead. The finish of the match comes when Gedo misses a missile dropkick and Jericho locks him in the Lion Tamer. I don’t know what I was expecting out of this match, but I was blown away by how hard hitting and fast paced it was. Jericho looked like a killer in this one and Gedo looked more than capable in his WCW debut. ***¾

Flash forward a little over a year and we’re with ECW for a trip to Japan. The video package leading into the match touts that in 1998 no other major champion in WWF or WCW defended their title in this country. The title match takes place in the legendary Korakuen Hall in an FMW ring. Gedo is much smaller than Douglas, but is still very competitive in his contest with the champion. After working over the leg, Gedo locks in the Figure Four on Douglas, which is a fantastic bit of mind games from Gedo, given Douglas’ hatred towards Ric Flair. Douglas gets out of the hold and turns the tide of the match, hitting Gedo with a sick looking neck snap. Douglas’ comeback doesn’t last long and Gedo almost puts the champ away with a frog splash. Sadly, the match is clipped quite a bit so we miss a lot of what goes on between the wrestlers trading control of the match. Keeping that in mind, the ending still feels abrupt. It looks like Gedo has the upper hand until Douglas hits a fisherman’s buster out of nowhere to retain his title. I understand what they were going for, to make it look like Douglas just barely pulled out the win, but it didn’t really work for me. Even though Gedo took the loss, he came out of this one looking pretty great, dominating the champion for a large chunk of the match. Because the match was so clipped, I don’t feel comfortable giving this one a star rating. 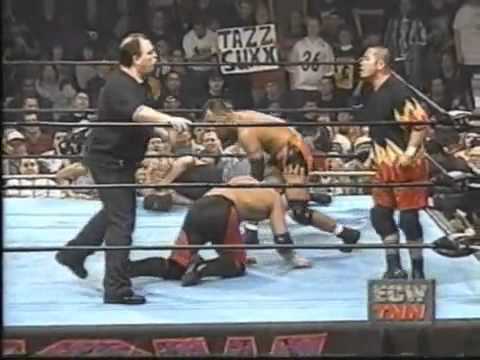 Here we go, it’s the match that inspired this whole piece. The way that this match opens, with complete domination of Gedo by Storm and Credible, it really feels like this is going to be a squash match. As the match proceeds it’s clear that this was done to set up Jado for one of the greatest stretches of offense coming from a hot tag that I’ve ever seen. Jado survives a Singapore cane shot to the head followed by a roll up by Storm and the crowd EXPLODES! A table is introduced into the match by Credible, who finds himself put through it with a hip toss by Jado. It’s right around this point where everything goes completely bananas.

Storm comes into the ring and gets hit with a Tiger Driver by Jado, which Gedo follows up with a beautiful frog splash. Storm kicks out at 2 and then survives a powerbomb from the top rope as the crowd is losing their minds. It truly looks like this will be an upset until Credible cuts off Jado and the Impact Players plant him with a spike piledriver to pick up the win. You can put that closing stretch up against any great modern closing stretch and it’s just as good. Man, this match is a ton of fun! It’s under 10 minutes long, but these four men manage to pack so much in. This match could have easily been the squash that it looked like it was going to be, but by giving Gedo and Jado all the offense that they got, it makes Storm and Credible look all the more stronger for beating them. Make the time and check this match out, it’s well worth it. ****¼

The final match of Gedo’s on the Network sure is an ECW match from 2000. Things begin with Simon Diamond directing Gedo and Jado to beat down Jazz. This then turns into the ECW trope of one match bleeding into another when Chetti and Nova run in to make the save. Chetti’s gear is truly horrendous, combining what looks to be a purple singlet with zebra print zubaz. I can’t stop looking at Chetti whenever he’s on screen. It’s like he’s a walking car crash. Gedo hits an awesome looking Asai moonsault on Nova and Chetti, only to be greeted with a USA chant. While just two days earlier Jado and Gedo were the babyfaces against the Impact Players, the team is now clearly in the heel role. Nova isn’t terrible in the ring, but in the early goings of the match, it’s clear that Gedo and Jado are on a completely different level compared to their opponents. Team No Respect, as Gedo and Jado were known at this time, controls most of the match until a sloppy comeback from Chetti. The first really cool spot of the match comes when Nova hits a Swanton on Jado right before Gedo hits a frog splash on Chetti. The referee makes a double count and both men kick out at 2. The match comes to a close when Nova and Chetti hit their finishing move on Gedo to pick up the win. Gedo and Jado are better than this match and their Icarus and fat Colt Cabana looking opponents. ***

While things may have ended on a bit of a low note, watching all the Gedo matches was a pretty great way to spend 50 or so minutes. All four matches don’t overstay their welcome and with three stars as your floor, you know the quality is more than solid. Gedo was great nearly twenty years ago and he’s still great now. Who would have guessed watching this guy then that now he would be one of the greatest booking minds in wrestling? I don’t think I would have, but when you see him lock Shane Douglas into the figure four, you get a glimpse of his brilliant wrestling mind. Putting that aside, I can only think of a few better ways to use the Network than this. Making mini-comps of Gedo matches is exactly what the WWE Network was made for. Kawato’s Getting A Haircut and Other CMLL Holiday Matches