Mike Bennett came out with new Knockouts champion Maria and bemoaned Moose’s betrayal last week. Bennett revealed that he fired Moose. Bennett said that now that Moose is out of the picture nobody can stop him. Dixie Carter disagreed. Dixie announced that she had just signed Moose and that Mike Bennett will face Moose one on one at Bound For Glory on October 2nd. Moose tried to get his hands on Bennett but Bennett ran for the hills. As a big guy who can move Moose is much better cast as a babyface. And Bennett, as a small weaselly coward, is a good foil for him. Moose should blast through Bennett at Bound For Glory though.

The number one contender for Maria’s Knockouts title at Bound For Glory will be crowned next week. This match was all about Allie. Allie just wanted to participate but Sienna bullied her. The crowd chanted “We want Allie.” After Allie tagged herself in and inadvertently hit Sienna with an axe handle, Sienna laid her own partner out with the Silencer giving Jade and Kim the win. Jade and Kim checked on Allie after the match. Allie is a fun character. **

Billy Corgan introduced TNA’s latest championship – replacing the now defunct King of the Mountain title – the Impact Grand Championship. Matches for the belt will be wrestled in three 3 minute rounds, with a 10 point scoring system, pinfalls or submissions being allowed at any stage, and the match will be decided by the judges should they go the distance. Basically an MMA-esque belt. There will be an 8 man tournament to decide the first champion with the winner crowned at Bound For Glory. Josh Mathews went into hyperbole overload here shouting about how it was groundbreaking. Drew Galloway came out and started talking about how he should be champion. Aron Rex came out and disagreed. They were about to fight until Billy revealed that Drew’s first tournament match would be next and Rex’s will be next week. I wonder what the finals of the tournament will be?

There’s little such thing as a bad idea in pro wrestling. Well, there is. There are bad ideas in wrestling all the time. But my point is that ideas are let down by faulty execution far more often than anything else. Nobody these days argues that Dolph Ziggler has spent the best part of a decade in midcard hell because of a silly name. They’d argue that because he’s been booked into the ground over and over again. This idea, which is at least an attempt to create a novel midcard with a distinct identity, will thrive or fail entirely based on the quality of the execution.


The scoring is based on aggression, controlling the action and physicality. While I’d argue aggression and physicality are basically the same thing, that simply makes it clear that being on the offensive is being rewarded rather than wrestling defensively. As a result these matches should have a totally different psychology. Basically three mini-matches with a connecting thread.

Drew totally dominated the first round and took the decision on all three scorecards. Sutter made a comeback half way through the and took the round on a split decision. Drew smashed Sutter with a nasty piledriver and submitted him with the Iron Maiden with 2:17 left in the third round. More of a showcase for Drew than the particular rules. Spud attacked Sutter after the match and curbstomped Sutter on the exposed turnbuckle. **1/4

Billy Corgan oversaw a press conference between EC3 and Bobby Lashley discussing their upcoming World title match at Bound For Glory. EC3 was filled with his usual bravado and promised to be the man to finally take the bully Lashley down a peg. Lashley cut through all of EC3’s bluster, talking about how he has heard all of this before from Angle, Galloway, Edwards, DJ Z, Storm and Bennett and he beat every single one of them. Lashley was absolutely fantastic here. He’s unlike most modern heel champions. He’s not a coward, at least outwardly so. He’s not somebody’s puppet. He doesn’t take a backseat to anybody. He is a legitimate badass. He backs up everything he says. He’s the most compelling heel champion in recent memory, and it’s really remarkable how far he’s come as a performer, a character and a wrestler in the last three years. Lashley talked circles around EC3 here and that’s no easy feat.

Lashley and EC3 brawled for a while afterwards, which felt unnecessary considering how tremendous the actual press conference was. The worst part of it though was Josh Mathews incessant need to narrate every single thing that was going on. He undercut any drama or any intensity the brawl was building up with his nattering. This was a moment where the action spoke for itself and somebody needed to tell Mathews just to lay out. It undercut everything Lashley and EC3 were going for.

Godderz controlled and handily won the first two rounds. Godderz had Drake in the Adonis Lock in the closing stages of Round 2 but Drake was saved by the bell. Godderz was then needlessly aggressive in the third round and rather than seeing the match out got caught with Blunt Force Trauma allowing Drake to progress via pinfall. The rules really accentuated this match. I wouldn’t have pegged Eli Drake and Jessie Godderz to be the guys to get this idea over and yet here we are. And credit to Mathews and Pope, they did a really good job calling this match and laying out the rules and scenarios for the audience. Also Godderz has really come along in the last year or so, developing from a bland kick/punch wrestler to a more dynamic, athletic, ambitious performer. He really has to be commended for just how much he’s improved. ***

And then came time for Delete or Decay.

Unlike The Final Deletion, this wasn’t framed as a wrestling match. It was less a wrestling match and more like Home Alone crossed with A Nightmare on Elm Street. Matt, Jeff and Reby came out all guns blazing, bombarding Decay with fireworks. Decay took cover under Skarsgård which was frankly blasphemous in my book. Decay then split up as Abyss stayed behind to combat The Hardys while Steve and Rosemary pursued King Maxel. Jeff dropkicked Abyss into a lake only for none other than Joseph Park to emerge. Park asked Senor Benjamin whether he had seen his brother Chris…Abyss in Spanish only to be tased for his troubles. Having an alter ego emerge from the lake was a wonderful callback to The Final Deletion. And Senor Benjamin is a badass.

While Benjamin dragged Park away to be buried (literally), Jeff and Steve shared attempts at drowning each other in a swimming pool. Abyss rose from the grave (again, literally), downed Senor Benjamin and pursued The Hardys with Janice. Abyss was about to impale Matt with Janice, but Jeff pushed Matt out of the way and took the blow himself as a forlorn version of Obsolete played in the background. Matt took a moment to recognise this extremely unselfish gesture.

With Jeff potentially bleeding out on the Hardy’s lawn and Decay bounding down on Matt, all hope seemed lost. However Vanguard 1 emerged and opened fire on Abyss and Steve, blasting them with rockets from the sky and causing the Hardy logo to be burned into the grass surrounding Decay. Rosemary overwhelmed Reby, took out Vanguard 1 with mist and looked to leave with Maxel. Rosemary and Matt came face to face and Rosemary attempted to spit mist at Matt too. Matt sucked all the mist into his mouth and spat it back at Rosemary, fending off Decay once and for all. But not without casualties. Jeff was wounded by Janice, Vanguard 1 was decommissioned by Rosemary and it would appear Senor Benjamin was kidnapped by Decay.


What makes stuff like this work and what makes say The New Day’s invasion of the Wyatt compound fall flat, is just how specific this all feels. As the great John Hodgman frequently says, specificity is the soul of all narrative. And this whole deal feels fundamentally from the Hardy’s brain. Sure there is likely input from others, most notably Jeremy Borash and the TNA production crew, but this simply would not work without Matt and Jeff and their own particular brand of weirdness.

The most important moment in the broader Decay attack cannot go without mention though. Beneath all the spectacle and horror movie tropes. Beneath the fake lawyer alter egos and the personified nail bats. Beneath the attempted drownings and attempted burials. Beneath all of that was a very fundamental character beat. After all Matt had put Jeff through, after months and months of attacks, after declaring his brother obsolete and working him like a mule, Jeff was still willing to sacrifice his own safety to protect his older brother. He took a nail bat to the gut for his brother.

Brother Nero, the name given to Jeff by Matt, is defined by the Urban Dictionary as follows: “A name created by Matt Hardy best used to describe a unfaithful traitor (namely Jeff Hardy).” However after all they’ve been through, when it comes down to it Jeff still cares for and wants to protect Matt. Jeff is still faithful to Matt to a fault. And Matt recognised that. It’s that kind of fundamental emotional moment that informs who these characters are and further drives their story that allows things like The Final Deletion and Delete or Decay to rise above enjoyable, silly genre spoofs and turns them into something more substantial.

This was a totally different beast to The Final Deletion. The overall tone of The Final Deletion was sombre, melancholic even. It was about the collapse of Matt and Jeff’s brotherly bond. Months of bitterness and selfishness and resentment coming to a head through over the top spectacle. It was more personal.

Fast forward two months and the Hardys are a united front once more, but on terms we aren’t all that familiar with. They were a family under siege, working together to fend off an outside threat. Rather than redeeming Matt, Matt has corrupted Jeff. But Jeff is less broken than fractured. As revealed in the bonus Delete or Decay content, deep down in Jeff’s consciousness he just wants to be partners with his brother like the old days with all the wild gesticulation and jumping off ladders that comes with it. Matt wants this too but is too stubborn to admit it. It was the loss of the World tag team titles that set Matt and Jeff on this arduous path toward deletion and obsolescence, perhaps it is only the World tag team titles that can lead them back to true reconciliation.

While hopefully a superb Bobby Lashley performance and an interesting new title reveal won’t be lost in the shuffle, this show was all about Delete or Decay. Different from The Final Deletion in both tone and execution, Delete or Decay was wildly entertaining nonetheless. 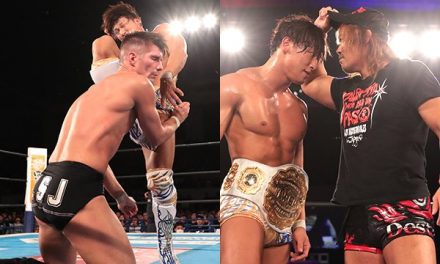 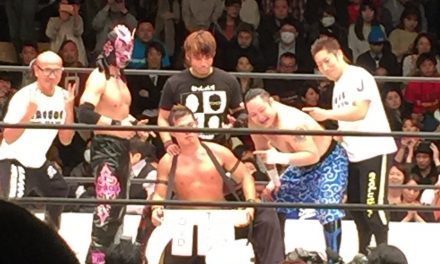 Open the Voice Gate Episode 5: Where In The World is Case Sandiego? 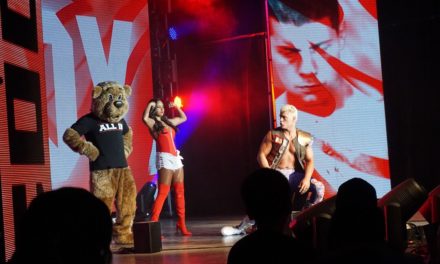