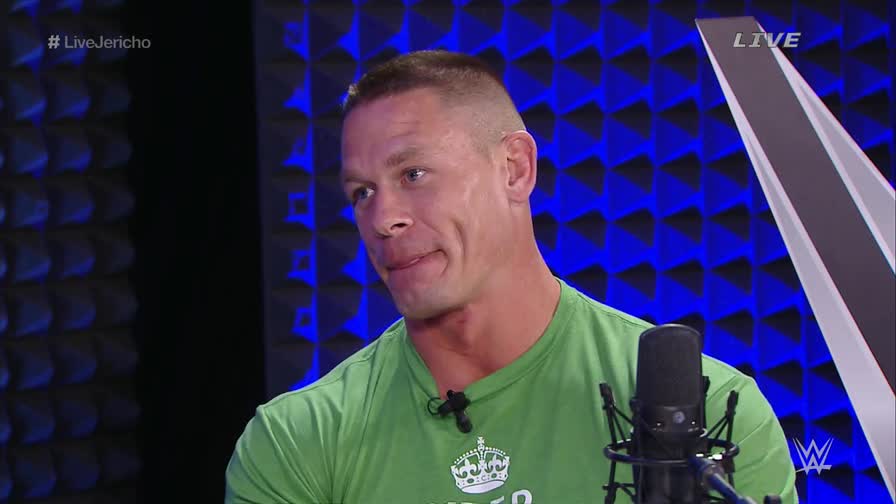 No Tiki Bar this week.

The podcast week in review, brought to you by the US Postal Service (or our Amazon and WWE affiliate links).

“Not only did the Great Sasuke sing ‘It’s My Life’ by Bon Jovi in perfect English, he had amassed a row of beer bottles, greater than a dozen I will say, all lined up against the bar, against the wall. And someone had mentioned to him, ‘Was that all you?’ and one of the interpreters who was with him that weekend said ‘This is why he is the Great Sasuke.’” – Bryce Remsburg

“People ask me all the time, how come you built it out here in the middle of nowhere? But see, it’s just like the Field of Dreams…you build and they will come.” – Ricky Morton on having his wrestling school in Chuckey, Tennessee

“I’m afraid if he does any more [shoot interviews] the Levy may run dry.” – Brian Last on Raven’s latest shoot

“He could talk the world into the building, but the minute he got in the ring, boy, they’d pay double to leave.” – Kevin Nash on Ox Baker

Eastern Lariat #27 (8/27/16): Strigga and Dylan are finally reunited to break down the Zero One Fire Festival, the Michinoku Pro Fukumen World League, the great state of Big Japan, the sad state of Pro Wrestling NOAH, Sendai Girls 10th anniversary, and a lot more. Great show for those still recovering from the G1, as there’s no New Japan to be found here. THUMBS UP

Conversation with the Big Guy #1 (8/28/16): The former Ryback gets in on the podcast game with Pat Buck serving as co-host, with the first episode focuses on the circumstances that lead to him leaving the WWE. There are a lot of juicy details that have gotten out (Ryback turned down a 1.5 million dollar contract, he was told he was going to crush that “twerp” AJ Styles), and honestly if you’ve heard them all you probably don’t have to listen to this show. But in a vacuum everything here is interesting, and credit to them for keeping it relatively short. THUMBS UP

VIP Lounge (8/28/16): When I saw Billy Corben was the guest, I was hoping it was a comical typo or the new TNA head’s non-union Mexican equivalent. But it turns out it’s the documentary filmmaker behind “Cocaine Cowboys” and some 30 for 30’s. Being a fellow Miami resident, there’s a lot of talk of the drug scene and some crazy stories. Then there’s talk about the process of documentaries and how he approached the 30 for 30’s despite not being a big sports fan. Strong show, and to his credit Corben is in on the joke making comments about now being in charge of TNA. THUMBS UP

Deep Blue Something #4 (8/28/16): Mike and Bryce are back to talk about washing your gear, the Cruiserweight Classic and regional quirks in wrestling, charity work in wrestling, their recent successful live streamed show, and finally the 2011 King of Trios and the memory of Larry Sweeney. The show is hitting its stride, with lots of good discussion and capped by a tale of Stan Bush meeting Steve “The Turtle” Weiner. THUMBS UP

The Card is Going To Change #12 (8/29/16): Another guest joins the week, as AIW mainstay the Duke shows up to talk his wrestling career. They talk about his crazy story of getting into the business (it involves a film crew) and his retirement, punctured with wacky stories like the time he broke Corey Graves’ nose. This one is a lot different from most weeks when the conversation is often genial, as here Chandler and John rip into Duke with glee to great comedic effect. THUMBS UP

Steve Austin Show #355 (8/30/16): The Revival of Scott Dawson and Dash Wilder make their podcast debut with Austin. A lot of the show revolves around the recent TakeOver match with Johnny Gargano & Tomasso Ciampa, breaking it down in interesting detail. We also get the prerequisite origin stories for both guys, how they got into wrestling, tag team wrestling, working in NXT, and all that. This show is a lot like the Revival themselves – not flashy but rock solid in every regard. THUMBS UP

MLW Radio #242 (8/30/16): Court’s still on holidays, so Alex Green is back to help MSL run down the headlines. Topics include: Bo Dallas being too drunk to fly, can Billy Corgan save TNA?,  a Cruiswerweight Classic finish mix-up, the Headbangers return, Orton/Lesnar II on a house show, and a thorough breakdown of Raw including the crowning of Kevin Owens as Universal champions. There’s some good discussion, but overall it’s pretty short and some of the humorous interludes don’t go anywhere. THUMBS IN THE MIDDLE

Talk is Jericho #278 (8/31/16): Glen Danzig of the Misfits/Samhain/Danzig makes a rare podcast appearance. He talks about his Misfit days, the CBGB’s scene, being banned on MTV, his love of Elvis (!), and some pro wrestling talk. Some people have really liked this, but I expected a Danzig interview to be more interesting. [Danzig’s interview starts at 6:40] THUMBS IN THE MIDDLE

Bischoff on Wrestling #6 (8/31/16): Eric and Nick do their usual rundown of the news (and Eric’s wife shows up to talk Blue Apron), but the big news is Hulk Hogan appearing for part 1 of a 3 part interview. Hogan talks memories of Mr. Fuji, Curt Hennig, Kevin Owens, politics in wrestling, Orton/Lesnar, and more. There appears to be the usual preponderance of Hogan BS (was he really watching Kevin Owens matches in NXT?), but it’s a decent enough listen. [Hogan’s interview starts at 18:07] THUMBS UP

Ric Flair Show #8 (8/31/16): Haku (who Flair calls “King” which is weirdly endearing) is the guest this week. The conversation starts out about Haku going to Japan to train sumo, but after that the entire show is pretty much about Haku beating people up, mostly fans, cops, and other wrestlers. So in short, it rules. Ric also talks about his embarrassing second WWF title win and takes a question about the most amount of money he ever spent partying.  Good times. [Haku’s interview starts at 17:05] THUMBS UP

Keepin’ it 100 #9 (9/1/16): The usual menagerie sees a discussion of Monday Night Raw (Disco wasn’t a fan of Owens winning the belt, go figure), a review of TripleMania with Kevin Kleinrock, Juventud comes by to sing a song and rap, Shane Helms discusses the situation in the Middle East (?) and Colin Kapernick, Kevin Nash, Scott Hall, and Sean Waltman talk about the time all three gave their notices and heel stables, and Vince Russo talks about Konnan smoking pot with his kid and trouble finding Chris Jericho. The usual packed outing. THUMBS UP

Art of Wrestling #316 (9/1/16): Another live show, but this time in Cleveland before JLIT. The guest list includes Billy Gunn, Hornswoggle, Johnny Gargano, Little Guido, Gregory Iron, and Dan “The Beast” Severn. The show is fairly chaotic, with guests doing run-ins at various points so you get to hear Billy Gunn trading barbs with Hornswoggle. A train wreck, with all the positive and negative connotations that come with that phrase. THUMBS IN THE MIDDLE

Jim Cornette Experience #144 (9/1/16): No guest this week, as instead Jim and Brian discuss Kevin Owens’ Universal title win, the One Man Gang’s Go Fund Me, Anthony Weiner, politics, Ryback, and take a few reader questions on wrestler safety and Zan Panzer. OK show, but this show always shines brighter when there is a good guest. THUMBS IN THE MIDDLE

Talk is Jericho #279 (9/2/16): Cody Rhodes and Zack Ryder come on to talk about their love of amusement parks. This might seem a specious topic for a podcast, but ultimately the show morphs into the crazy adventures of Zack Ryder. There’s some stuff about their favorite rides, but mostly what you get is Zack’s adventures in dating and karaoke. Funny stuff, and R&R’s friendship is genuinely endearing. And if you’re wondering, this was recorded before Cody left the WWE, and in fact he stayed there longer to get the show in the can. [Rhodes and Ryder’s interview starts at 6:20] THUMBS UP & BEST OF THE WEEK

MSL & Sullivan Show (9/2/16): The show opens with a discussion of Alberto Del Rio’s departure from the WWE, and the scoop that allegedly WWE tried to break up him and Paige. From there Kevin and MSL answer reader questions about count outs and tag rules before wrapping up with a review of the 11/25/96 Nitro. Sullivan’s total recall continues to astonish me, as he readily has an answer for why he booked a double count out between Lex Luger and Arn Anderson 20 years ago. [The Nitro review starts at 44:53] THUMBS UP

Something to Wrestle With #5 (9/2/16): The theme of this episode is the Montreal Screwjob…wait, come back! Yes, it’s been covered to death, but the show largely covers the main event scene from Mania XII through Survivor Series ’97. Lots of tidbits, some things that contradict things we’ve heard from Bret and the Observer, but Conrad as always does a masterful job challenging Bruce and weaving the conversation. And they’ve done away with any discussion of current events, which is a welcome example of listening to your fans. THUMBS UP

Voices of Wrestling (8/29/16): The Flagship sees Joe and Rich discuss Kevin Owens as Universal Champ, break down the DDT Peter Pan show, and Bounce Around Japan in an extended sequence. 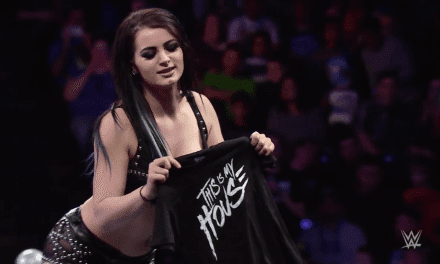 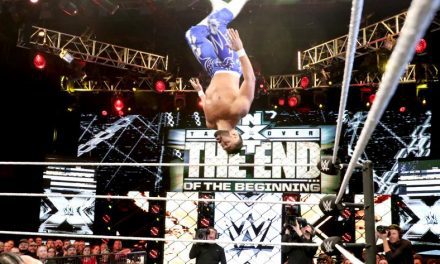 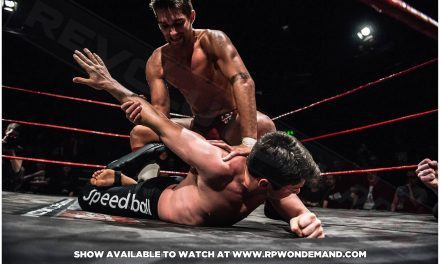