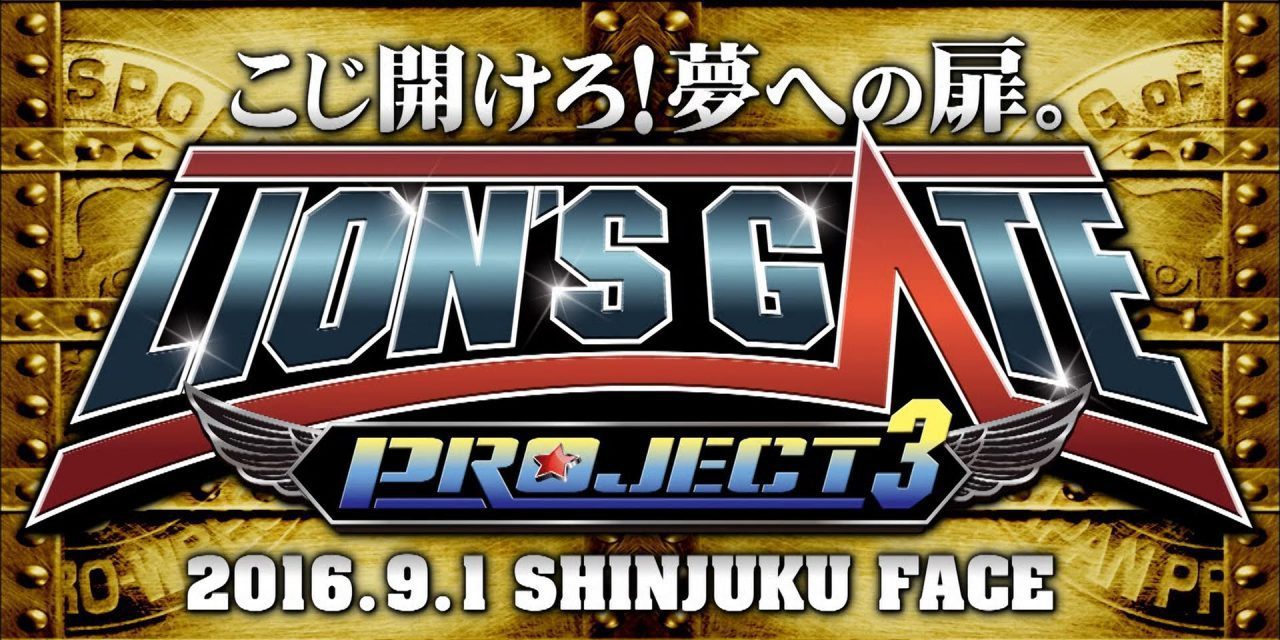 With Lion’s Gate Project3 completed, we’re roughly six months into the Lion’s Gate era. Let’s take a look at the curious case of the overall low workloads of the latest class of New Japan young lions.

Tomoyuki Oka – Universally regarded as a can’t miss heavyweight prospect and potential future ace, Oka has yet to make his official debut, having participated in two exhibition matches at LGP1 and LGP3.

Katsuya Kitamura – Like Oka, Kitamura is a heavyweight, and has also not yet made his debut, having faced Oka in the aforementioned exhibitions. He’s a bodybuilder, and as his shady doping history suggests, he’s a monster.

Takumi Honjo – A third heavyweight, Honjo has a background in judo and checks in at a hefty 250 pounds. He made his debut at LGP1, worked five more matches over the course of two tours, and seemingly vanished off the planet in March.

Hirai Kawato – Just 19 years old, Kawato has yet to grow into his frame but at this point almost certainly projects as a junior. He’s the only lion of the crop to participate in all three LGP shows.

Teruaki Kanemitsu – Kanemitsu is 23, and at 5’10” 200, there is a chance he could grow into a heavyweight. Of the group, he has the most total matches under his belt to this point at 25, but like Kawato he worked zero matches between LGP2 and LGP3.

There seems to be a clear lack of confidence in this group as a whole. Kawato & Kanemitsu looked perfectly competent for a couple of rookies, exhibiting the selling and fire you typically like to see out of guys at this stage, before being yanked off of shows in May. Twenty(ish) matches is way too soon to draw any kind of meaningful conclusion unless you’re dealing with a prodigy level talent, but measuring progression is impossible if they never wrestle. The pair is booked solid on the Destruction tour, so we’ll soon get an extended chance to see if four months of secluded dojo work has been of benefit.

Honjo is a ghost. Is he injured? Did he quit? Victim of a mob hit? Nobody seems to know.

Which brings us to Kitamura and Oka, the prized recruits of the bunch, with Oka being the crown jewel and the gleam of Takaaki Kidani’s eye. My theory is that New Japan, and specifically Kidani, may not want to expose Oka to the masses until he’s a finished product. If he’s the real deal like they think he is, the idea could be to wait until he’s good, push him from the jump, and create a new star right out of the gate. This would be an enormous departure from the way things have been done for decades, but if they truly feel like they have themselves a generational star on their hands, it might not be a bad idea to bypass tradition. If nothing else, they both look the part. These are some big boys. Oka has a presence about him already, and Kitamura is the kind of monster than Vince McMahon would sign on sight.

Of course, this wouldn’t explain Kitamura being completely hidden (or Honjo, for that matter), so maybe these guys simply aren’t very good. Which would be bad, bad news for NJPW.

No crop of lions was going to look good following the impossible act of Sho Tanaka, Yohei Komatsu, Jay White, and David Finlay, which was one of the greatest group of lions at that stage of development ever. Tanaka, Komatsu, and White are deep into their excursions, and Finlay’s has been delayed, with the obvious speculation being that the new guys aren’t ready. If this is the case, and we don’t know for sure whether it is, that would mean the new group being slow to develop is also hurting the development of a member of the previous group.

Their first exhibition at LGP1 was amateur style with simple grappling. This was pro wrestling style, with basic moves and throws, building to a Oka belly-to-belly suplex highspot. Oka had Kitamura in a deep crab hold as time expired. 5:00 draw. Kitamura showed good fire, and Oka’s belly-to-belly looked great. This was sloppy early, but they both showed enough that it quelled my suspicions that they may be flopping badly in the dojo. I’m sticking with my hypothesis that the company may be hiding these two guys for a grander reveal, feeling they have mega upside.

This was Henare’s NJPW debut, so he ate a Quiet Storm lariat and lost. This was very basic, and about the only thing I could glean from it was that Henare knows his basics and has excellent snap on his bumps. Aside from that, he didn’t have a chance to show much, and probably won’t for a few months.

The 23-year old Henare is a 5’10” 230 pounder from New Zealand. Like fellow New Zealander Jay White, he didn’t exactly appear out of nowhere, having made his pro debut back in 2012 on the under reported New Zealand scene. New Zealand has become a bit of an underrated pipeline as of late, an untapped scene that has fed Bad Luck Fale, Jay White, and now Henare into New Japan, Kingston Eclipse to the NOAH dojo, and has also produced Evie, a regular with top women’s promotions SHIMMER and Stardom. *1/2

I loved how Ohara sauntered into the ring and didn’t take Kawato seriously at all before moping the ring with him and twisting him into a pretzel for the submission win. That’s exactly what I wanted out of this. Kawato appears to have added some weight during his four month disappearance, and no longer looks like a scrawny teenager patiently waiting for puberty. **

Kanemitsu has also added some weight, and has enough of a frame that I could see him as the type who starts off as a junior but has enough tweener size to eventually move up. This was a bit more ambitious than the previous two bouts, but unlike Ohara, the disinterested Kenoh looked like he’d rather be anywhere than slapping around and beating a young boy at THE FACE on a Thursday night. **


Tomoyose is quite a bit more advanced than his NJPW contemporaries, but working every night (and working with veterans) will bear those results. He’s a legitimate heavyweight, shaped like a bowling ball, but he bumps and flies like a junior. Here he showed off his silky smooth high cross body off the top rope and took a great flip bump on the lariat that set up the match ending Kokeshi. I enjoyed this. **1/2


Asakawa is a 27-year old K-DOJO rookie who debuted almost one year ago to the day. He’s a stocky junior who is old for a rookie, but he’s a decent little worker.

The big story here was Finlay, who debuted new gear, sporting cheetah print trunks and a black ring vest. This is an interesting development, and perhaps signifies a bit of a promotion to the Cody Hall/Juice Robinson limbo level where you aren’t quite a young lion, but you’re still a prelim guy. He mostly dominated here, and won with a cutter. Usually Finlay is the younger guy getting beat on these shows, so that’s another sign of an incremental elevation. **1/4


Yoshida is another good looking K-DOJO rookie, and at age 23 and with good size, figures to have more upside than Asakawa. He lost to Hitoshi Kumano at LGP2.

Juice Robinson has been the MVP of the LGP shows, with arguably the best match of the night on both of the previous events (including a legitimately great bout against Go Shiozaki at LGP2), and is clearly someone whose stock has gone up with his LGP performances. He was excellent again here, as even thought the outcome was obvious, this was the first match on the show that didn’t feel like a squash. ***


Kumano has graduated from young boy status, having picked up wins on these shows and even some pinfalls over veterans in NOAH. I like his work, even if I don’t see him as a potential top guy.

This started off with a fun spot where Kumano offered up a handshake (possibly playing off of NJPW/NOAH tensions), which he then turned it into a backslide attempt. It was all business from here, as Taguchi mostly played it straight. Taguchi wins, but Kumano working the semi main and being treated like a fellow veteran is a good step up for a guy who worked an early prelim on LGP1. **3/4

This was a (sort of) rematch from the explosive NJPW vs NOAH tag at the G1 Finals, with Kojima added to the NJPW team and Kiyomiya the fifth man for NOAH.

This started with a wild brawl all over the building, and ended with another post match riot. While not quite as heated as the G1 brawl, it did have the disadvantage of a red hot sold out Sumo Hall vs less than 500 fans in Shinjuku FACE. It also had an obvious pin eater in Kiyomiya, but he was given plenty of ring time and shine leading up the finish. He stood up to Shibata early on, which wasn’t a good idea for his physical well being, but it did show heart. Later, he hit a gorgeous top rope drop kick on Nagata which scored a near fall, then slapped on a crab hold that the fans played along with even though nobody was truly buying it as the finish. Nagata eventually put him away with the backdrop hold, but Kiyamiya came out of this looking good. He’s got a very bad look going right now with his unibrow, gangly body, and third grade haircut, but I do see a really good worker in this awkward fella, and I wouldn’t be surprised at all if he develops into a solid upper mid card workhorse at absolute minimum.

Other key takeaways here were the Shibata/Go interactions, which were once again fire, and Nakajima seemingly wanting Nagata dead. Those look to be the two big singles matches that all of this is leading up to. There was another wild pull apart in the post match, but unlike Sumo where NOAH ran off the home team, it was New Japan running off NOAH this time.

One disturbing aspect of all of this is that Nakanishi and Maybach seemed to be paired off in the match and in the brawls. That is a potentially horrifying singles match that no human needs to be exposed to. ***1/2

This was the worst of the LGP shows so far, even though it probably had the best main event of the three. The previous shows had better support underneath, which is where this show dragged badly. If you’re not someone who enjoys watching the young boys develop, I would recommend skipping directly to the main event. 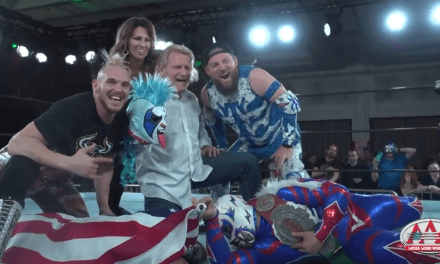