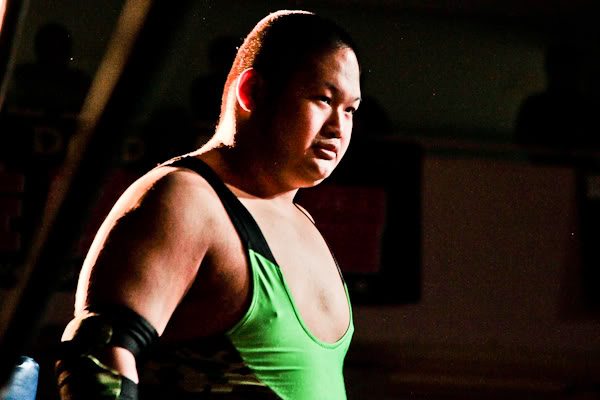 Don’t let appearances fool you. Shigehiro Irie is a brute force to be reckoned with. Sure, he’s got a silly green-and-pink mohawk and a big chubby-cheeked smile plastered on his face but there’s a reason he’s nicknamed the “Wrestling Teddy Bear.” The teddy bear is modeled after the grizzly bear, and the grizzly bear will fuck you up. If you want to see what Irie can do to an opponent, watch The Revenant with Leonardo DiCaprio

. But unlike the grizzly in the movie, Irie will at least give you a hug after the mauling is all said and done, maybe even watch Toy Story 3

For the past eight years, Irie has cut his teeth in DDT, with intermittent appearances in All Japan Pro Wrestling and the occasional stop in Big Japan, where he fits in quite nicely with the other hosses of the Strong Division.

He’s held tag belts in all three of those promotions, as well as getting a solid run with the KO-D Openweight Title in 2013. Last month, Irie embarked on an “indefinite” excursion to the far west, having already battled the likes of Chris Hero in AAW and Eddie Kingston in AIW. If he finds some gold along the way, great, but Irie has stated that his goal is to grow as a human being. Perhaps learn a thing or two in English.

If you have the opportunity to watch Irie wrestle in a town near you, do yourself a favor and buy a ticket. If you haven’t seen him wrestle at all, don’t sweat it — I’ve put together a list of some of his finest performances of the past year.

He’s a unique talent for sure, with an agility that betrays his size and tremendous offensive execution, whether he’s trading big bombs with the junior heavyweights of DDT, or slugging it out with the stiff BJW veterans.  Everything looks hard-hitting and impactful.

To give credit where it’s due, Keisuke Ishii’s bullied underdog performance really upped the quality of this match to the next level. Strong BJ do a good job of isolating Ishii from the outset, wearing him down with wrenching holds and repeatedly scoop slamming him with quick tags in and out. Ishii tries to fight back with open hands that pop like Black Cats but he still gets chopped down by the muscle monsters.  When Irie gets the hot tag, he immediately plays bumper cars with Strong BJ before leveling both with shoulder blocks. But the turnaround is short-lived and the champs regain control. I loved Okabayashi’s torture rack throw of Ishii into Irie, before Sekimoto wrecks Ishii’s back with whips into the corners before trying to submit him with his own Argentine backbreaker. Irie trying to fight off Strong BJ was great but he ends up on the receiving end of a triple German suplex. In the end, Ishii gets a couple of hot false finishes, at one point spiking Sekimoto with a gnarly double arm brainbuster! But the champs prevail as Sekimoto finishes off Ishii with the deadlift German.

The rules of the Texas Death Match are simple. It’s essentially a Last Man Standing Match, with the exception that you must be pinned before the ten count is initiated. I love this match. On the one hand, it’s kind of a clusterfuck, as the ring breaks within the first minute of the match. I’m not sure how much this dictates the rest of the match, but either way, they improvise beautifully, in spite of a few momentum hiccups. The match was anchored by terrific legwork and selling, and the drama surrounding the ten counts was executed  exceptionally well. One of my favorite small moments of the match came after Akito hit the cross-legged kneebreaker. Irie lunges at him with an elbow but Akito scissors the arm and wrenches back on Irie’s bum leg, then traps the other arm, forcing Irie to bite down on the ropes for the break. Irie fights through the pain, faltering under his own weight at times, and strikes back at Akito with some decapitating lariats and a brutal arm-trap piledriver. He tries for a second piledriver onto a pile of chairs but Akito counters with another kneebreaker and goes back to destroying Irie’s leg.


There’s so many great moments from Irie, like his stiff headbutt rebuttals and his tumble through the ropes to the outside. Out of frustration, Akito strips off Irie’s kneepad and just starts attacking the exposed knee, setting him up for the Sharpshooter. Irie elbows his way out and keeps brutalizing Akito with those vicious elbow shots, trying to wear him completely out, but the crafty Akito is able to secure yet another leg lock and keep it cinched in through Irie’s clubbing attempts at escape. Irie has no choice but to tap out and in vain, he tries to get back to his feet using the loose ropes for leverage — but ultimately, he can’t beat the ten count. This is the match that sold me on Shigehiro Irie, and easily one of my favorite performances of 2015.

Two hard-hitting hosses crashing and beating each other up for our enjoyment, wasting no time throwing elbows and sweat-flying chops. Irie gets the early advantage over Okabayashi with a shoulder block but Okabayashi muscles his way back to the driver’s seat. Irie tries to elbow and headbutt his way out of a top rope predicament but Okabayashi superplexes his way through the damage. In a great moment, Irie counters the Argentine backbreaker with a hand in the mouth, which leads to one of the best double lariat spots in recent memory. I love his collapsing headbutt into Okabayashi as they’re both recovering from the lariat collision. The strikes exchanged down the home stretch are flat-out wicked, especially Irie’s elbows as Yuji is desperate to grab onto Irie’s shoulder strap. Irie is able to blast Okabayashi with the Beast Bomber but it’s not enough and after another give-and-take of slaps and headbutts, Yuji hits a lariat and the Golem Splash for the well-earned victory.

In another match that would feel right at home in a Big Japan ring, the grizzly bear and the big dog beat the snot out of other in order to reach the final of the annual King of DDT tournament. Right out of the gate, Irie looks for the katahajime and the build to him finally getting it locked on was really well-constructed. Ishikawa’s midsection work was almost primitive in execution, at one point lifting Irie up by a leg and booting him in the gut. Great facial selling by Irie throughout, some nasty elbows thrown, back-and-forth backdrops – and finally, Irie slaps on the katahajime. The ref, however, is inadvertently knocked down, preventing Ishikawa from using a rope break, so he elects for a second-rope backflop but Irie still keeps it locked in. They unload on each other in the final minutes, with Irie landing a couple of big lariats and Ishikawa answering with a dragon suplex and a running knee, collapsing in exhaustion after connecting. Ishikawa would go on defeat Irie after delivering a few more knees but Irie looked great here, and  more than held his own against the big dog of DDT.

Before Irie departed for the states, he had his farewell match in DDT, teaming alongside Yukio Sakaguchi against HARASHIMA and former partner, Keisuke Ishii. This was a very fun, smartly worked tag match, built around Irie’s silly mistake of going to the wrong corner for the tag out. HARASHIMA and Ishii keep the tags fresk, working the early strategy of keeping the teddy bear grounded and cutting off his comeback attempts. Irie’s finally able to hit the POUUUNCE! and make the tag to Sakaguchi, who brings his faux-MMA finesse with machine gun kicks and submission work. There are clever double team spots, a surprise double stomp save from HARASHIMA, and an exciting finishing stretch, which included Irie hitting an awesome pop-up Fire Thunder Driver on Ishii and the Beast Bomber for the win.

While Shigehiro Irie wrestles his way across the United States, earning new experience points and leveling up his in-ring game, Shuji Ishikawa holds the KO-D Openweight Title back in DDT and may just be keeping it warm until Irie returns to Japan in grand fashion.