Hideki Suzuki seems hard-pressed to give two fuck about the well-being of his opponents (especially if that opponent’s name is Yasufumi Nakanoue). He will coolly climb through the ropes, walk up and slap you in the face, and then try to snap off your arm. He was trained by the legendary Billy Robinson so he channels a little bit of the Robinson spirit each time he steps into the ring.

Part of what sets Suzuki apart is not only his 1970s-inspired offense but the organic way in which he constructs a match, seamlessly flowing from one hold or counter to the next, making every submission feel meaningful. Each match feels unique and smartly worked, in that he doesn’t just utilize a copy-and-paste move set but will improvise based on the situation.

Suzuki can work a limb like a full-time job but he can also strike with the best of them. That’s no surprise considering he spent almost five years “fighting” for the Inoki Genome Federation and working a handful of dates for BattlArts. I didn’t really notice Suzuki until a couple of years ago, when he became a freelancer and began popping up in promotions like ZERO1, WRESTLE-1 and Big Japan, sticking out from the standard crop of wrestlers. He made an immediate impact, capturing the NWA United National Heavyweight Title and the ZERO1 World Heavyweight Title, not to mention beating KAI in under seven minutes to become the WRESTLE-1 Champ.

Hideki Suzuki condescendingly patting KAI on the head after he beat him for the title is one of the best moments of 2015.

Unfortunately, a lot of his stuff hasn’t made tape, making it somewhat difficult to watch Hideki Suzuki’s work, but I’ve dipped into the obtainable resources and came up with what I consider some of his best performances from the last few years. That being said, I would also highly recommend you seek out any of Suzuki’s recent and aggressive encounters with Yasufumi Nakanoue in BJW. Zero fucks given. Oh, and be sure to check out the 12/22/14 WRESTLE-1 tag match against KAI and Masakatsu Funaki to see what happens when Suzuki pisses off Funaki.

Suzuki isn’t the most experienced of the bunch and quite frankly, he’s overshadowed by the Ishikawa/Ikeda exchanges but this is a good introduction to his non-IGF work. The match itself is pretty great. The scrapping between Ikeda and Ishikawa is raw and genuine, knowing each other so well and of course, throwing those stiff as day old cat shit strikes. Super Tiger II is…motivated, but still lands about six out of every ten kicks. Suzuki’s matwork is solid and he does a solid job of transitioning and modifying his holds as need be. He gets bullied by kicks and doesn’t really have much of a chance to show off his striking ability but gets a couple of decent throws, including the Robinson double arm suplex into a kimura. Unfortunately for Suzuki, he gets clobbered by Ikeda’s short-arm lariat and takes a nasty solebutt to the face to end the match. Okay, maybe not the greatest Suzuki performance but you get the idea moving forward.

Fast-forward to 2014 and we start to see the fully formed pro wrestler, Hideki Suzuki. His title challenge against Kohei Sato has it all: swank matwork, stiff strikes, and arm brutalization, further complimented by Sato’s great selling. Suzuki wants to incapacitate Sato by any means, kicking the arm, standing on it, and just wrenching it to hell. A good defense against Sato’s deadly elbows. When Sato is able to fire back, he relies on his kicks. There’s a fun little spot where Suzuki is struggling to hit the double arm suplex so he says ‘fuck it’ and hits an Exploder instead. The finishing stretch sees some big time offense from both guys, including a desperation sheer-drop Falcon Arrow from Sato and Suzuki folding him in half with a dragon suplex. Sato keeps his title this time but will eventually lose it to Suzuki. The two just work together so well, even as a tandem.

This thing starts innocent enough, with Suzuki grappling a bit with Sugiura, trading hard elbow shots, working the back of Masato Tanaka with Sato. We get that ‘no fucks given’ attitude from Suzuki. There’s a point in the match where Sugiura has Sato in an ankle hold and Suzuki calmly walks in and clobbers him in the face with an elbow before encouraging his partner. But good lordy, this thing ends with a bang. Bomb city bang. A no sold super Falcon Arrows. Sato dusting off the Northern Lights Bomb for Tanaka. There’s also this nutty suplex sequence where Sato and Suzuki take turns dumping poor Tanaka on his head. The lead-up to the finish sees Tanaka busting open Sato with a headbutt and it’s all down hill from there. Overkill, yes, but in the best way possible, especially when you’ve got these four in the ring together slugging it out.

In 2016, Suzuki is the confident champion and it shows in his title defense against Masato Tanaka, where the veteran has to fight hard to get any kind of upper hand. Suzuki does a great job of controlling the flow of the match, making it his match. His ground game is suave as he consistently cuts off Tanaka’s momentum, wearing him down for a suplex throw, never seeming in real danger of losing the title. Tanaka gets in a few of his spots but they don’t come easy and they dont’t get the job done as Suzuki ultimately retains. He would go on to lose the title to Kohei Sato on 3/27 in a disappointing match. But at the same time, Suzuki was involved in Big Japan’s annual Ikkitousen Strong Climb tournament, and put on a strong performance against Shuji Ishikawa two weeks later.

Two of my favorite wrestlers in Japan today and the result was something akin to a friendly (but not overly friendly) chess match. Organic and tangible, without any unnecessary glitz. Suzuki outwrestles Ishikawa at the outset, forcing Shuji to rethink his approach on the outside while Hideki respectfully holds the ropes open for his return. Instead, Ishikawa offers him a seat on the outside, where they proceed to elbow the shit out of each other, a game Ishikawa excels in. But he also shows his skills on the mat, working on Suzuki’s midsection, tying him up in the leg scissors and mockingly slapping his back. One of my favorite moments of the match came when Suzuki countered the Rainmaker-style headbutt with a sleeper hold, and when Ishikawa gets a little too close to ropes, Suzuki turns it into a dragon suplex.

I felt like they were ramping up for the exclamation point conclusion with their strikes but the counter and flash finish win for Suzuki again highlights his ring awareness and craft. Whenever a Hideki Suzuki match makes tape, it’s a real treat to watch. Regardless of the outcome, it’s a breath of fresh air, not the same formulaic song-and-dance. I don’t think Suzuki’s had his career-defining performance yet but I feel like Big Japan has been a good fit for him and hopefully, we’ll get to see some bigger match-ups and a chance to shine on a bigger stage. 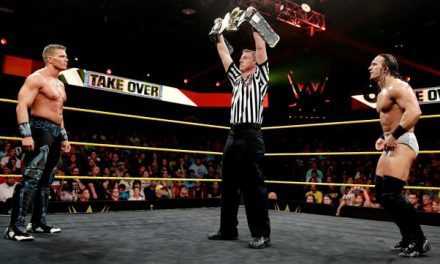