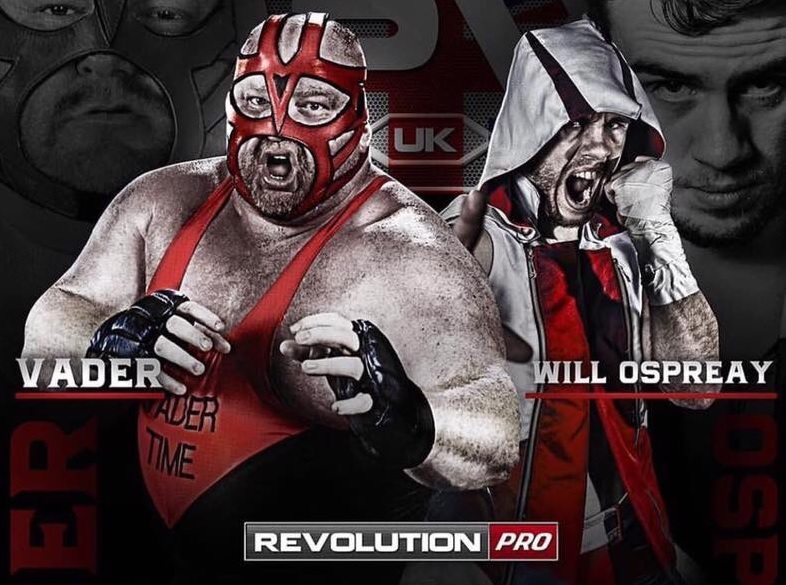 Last Friday, the UK saw RPW Uprising take place, this was Revolution Pro Wrestling’s third York Hall show in as many months, headlined by a controversial main event to say the least. Vader took on Will Ospreay in a match that grew out of a Twitter beef, but thankfully the rest of the card was far closer to the quality we’d come to expect from RPW’s York Hall offerings.

This was a fantastic opener. Both men went at it with all they had right from the opening bell with some stiff strikes and the high intensity levels carried through the whole match. I noted it when Bodom had his match against Hero, but he’s really upped the striking side of his game over the last six months or so and it showed here too. The two guys gelled immediately, and there was a wonderful flow to the match where everything done felt important. The match ended perfectly at its peak too and really had no down periods, so it did a wonderful job of kicking off the show and heating up the crowd.

They put over White super strong here. He took everything Bodom had, including a powerbomb onto knees and the Bliss Buster, and kicked out of it all then caught one of his kicks and transitioned it into a kneeling Boston crab to submit Bodom clean in the center of the ring. He was presented as being just a little bit better than Bodom in every area. That’s the same guy who recently beat Chris Hero and went toe-to-toe with Tomohiro Ishii, so RPW clearly has big plans for White. ***3/4

This was solid but unspectacular stuff. Big Damo kicked things off quickly and somewhat smothered Samuels, with Sha only being able to gain the upper hand through some manner of cheating and even then it never lasted long. It looked like Damo was just going to steamroll Samuels but then there was a ref-bump and Samuels choked Damo out with a scarf assisted sleeper. There were some fun big man moments, but overall it was fairly forgettable. ***

This was an unannounced match thrown onto the card after Smile impressed on the recent Cockpit show. PJ Black just randomly showing up unannounced was a surprising one, although the show was sold out ahead of time. The British Young Bloods are working an oblivious heel gimmick, where they have no idea that the crowd hates them. I’ve never been a big fan of them as a team, but this is something that’s working well for them.

The match itself was pretty good. Smile played a good face-in-peril, the Young Bloods got good heel heat and Black brought energy to his hot tag. The one perplexing thing about this match was the result. The Young Bloods pinned Smile in his York Hall debut following a german suplex discus lariat combo. While I think the Young Bloods have something that works for them they’re still very much a lowercard act and viewed as jobbers by the fans. Ryan Smile is a guy a lot of people see as a future big player in the major UK promotions, so having him be the guy to take the pin here was unusual.

Oh, and there was far too much dabbing occurring here. ***

These two had a critically acclaimed match in PROGRESS title match earlier in the Summer, so expectations were high going into this. I’d say it was fair to say they were met. The match started off a tad sloppy, but from about a quarter of the way through onwards it was just a magnificent display of wrestling. The crowd was electric throughout and bought into everything they did, and they did an excellent job of conveying their story.

It told a fairly simple story at its core. Ever since Scurll beat Ospreay at the beginning of the year he’s been on a tear in RPW, using the strategy of out-scouting his opponents, breaking down their arms and then tapping them out to the crossface chickenwing. Here he came up against an opponent in Chris Hero who scouts his opponents just as much as anybody, and was simply too big to lock the chickenwing onto. Scurll came to that realisation midway through that match that his standard tactic wasn’t going to work, so panicked and went towards a power game he doesn’t usually rely on as well as a multitude of desperation roll-ups. Going out of his wheelhouse didn’t prove fruitful though, and Hero stuck to his signature offensive barrage of strikes to the head and piledrivers. As resilient as Scurll is the cumulative affect proved too much, with Hero punctuating the match with a second rope Gotch piledriver for the victory.

After losing to Bodom in June a loss for Hero here might have begun to hurt his credibility in RPW. Obviously he’s a big name consistently putting on great matches wherever he goes, but while Bodom’s victory over him felt like a big deal had he continued to lose then there would have been diminishing returns to how much there would have been gained. Him winning here and ending Scurll’s ten match winning streak has instantly re-established him as a big deal and any fall he does drop from now on will mean ten times more than if he’d have lost here. Plus, due to the way Hero was presented as a horrible match-up for Scurll and how great the match was, Scurll lost absolutely nothing here. It also potentially gives him somebody to overcome later this year to lead into his title challenge.

Even better than their PROGRESS match. ****

This match was good but didn’t have close to the energy of Dunne’s match with Ospreay from the month before. Dunne is a great base for fliers, so this had a low floor, but things got fairly resthold heavy in the early portions. Things picked up down the stretch, but they never really hooked me in, although the work was consistently clean and impactful. Overall far from a bad match, but disappointing. ***1/4

This was a bizarre match. Cobb essentially squashed Sabre for the first two thirds, then Sabre came back with a very one dimensional comeback where he essentially just repeatedly kicked and slapped Cobb until he stayed down then pinned him. It was all very unsatisfying and anticlimactic on Zack’s end, although I thought Cobb really held up his end of the bargain. A hard one to rate, but definitely another disappointing title defence for Sabre. ***

What was far more interesting than the match itself was everything surrounding it. The match was clearly intended as a ‘David vs. Goliath’ story, with the early domination intended to build sympathy for Sabre with him then triumphantly fighting back and overcoming the odds. However, the crowd was utterly uninvested in the early portions, and only came to life later for the comeback. The shocker here was they came alive to near-unanimously boo Sabre.

This was fascinating, as there’d been no real hint that this would happen from crowds prior. I may be of the viewpoint that Sabre’s title run has been very disappointing, but among the RPW fans up until this point I’ve felt like I’m somewhat on an island. In theory it’s the natural storyline progression, because if you’ve been following the ‘Live at the Cockpit’ studio shows Sabre has been starting to cheat in his matches due to the influence of Scurll. However this hasn’t spilled over to the York Hall shows yet, and due to the delayed releases of the Cockpit shows only those attending live have seen that progression and I can’t imagine they made up more than about 5% of the crowd here, so that line of logic doesn’t really hold any water.

Instead this felt like a rejection of Sabre as a champion, something that really felt like it came out of nowhere. It all looked like it was going to be very awkward, with Zack seemingly not knowing what to make of it all, when Scurll came down the ramp to join him and helped him revel in the hate. This felt like something very impromptu, as I have a hard time believing they could have predicted this double turn without any real trigger, but my hat is off because it saved the entire segment.

On the opposite side of all of this, Jeff Cobb ended up becoming York Hall’s hero of the night; they absolutely loved him by the end of the encounter. So much so in fact, that after him getting a standing ovation RPW owner Andy Quildan came down to the ring and invited him to take part in the WrestleMania weekend show next year in Florida to rapturous applause.

What to say about all of this?

If you follow me in any form then you’ll probably already know that I was deadest against this match as a whole. York Hall main events are something very special, and I can’t see 61 year old completely immobile Vader working a twitter angle into getting that spot as anything other than a complete waste.

That all said, seeing and hearing the reaction to Vader’s entrance here was very cool. It was comfortably the most negative reaction I’ve ever witnessed at a RPW show. At the same time though, Vader struggling to descend down the entrance ramp really confirmed anybody who would have been in doubt that the big man had no business being in the ring anymore.

The match was terrible, as was somewhat expected. Vader couldn’t move and frankly looked awful in his torn shirt waddling around, and Ospreay basically threw himself around in his general vicinity, including throwing himself through a table. After Will then rallied and got back into the ring Pete Dunne came out to assist Vader, which then lead to Ricochet coming out to help Will even the odds.

The whole story of this match was that some old out of touch guy called out the new generation of talent saying that their style sucked. Then he went and won, basically proving himself right. If the style was any good then surely he would be able to beat this old man. Instead you’re left with your hottest home star left looking weak with the man he’s put over way out of the door.

Some have postulated that Vader may have refused to job day of, which may well be true given his track record (especially in the UK). However, if that is in fact what happened, that track record was known about going in so it just begs the question: why did you chose to gift him a main event spot in the first place?

The only positive of all of this is that it’s firmly cemented Pete Dunne in a featured role for RPW. But this is the opposite of what I personally want from a York Hall main event. 1/2*

Well with the crowd’s reaction to Sabre Jr., suprise York Hall debuts, two really good matches and THAT main event you can’t say this show was uneventful. The first half is packed with great wrestling, while the second half has kind of a carcrash ‘can’t look away’ type of appeal. At the very least make sure you get around to watching White vs. Bodom and Hero vs. Scurll.