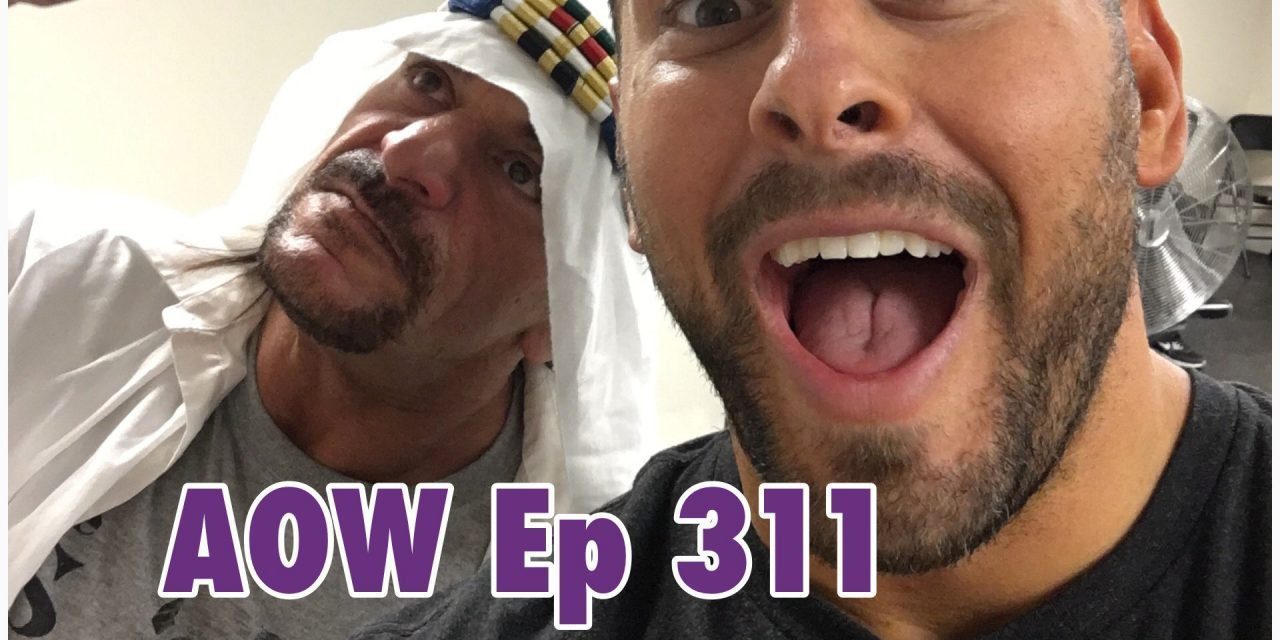 I’m hand waving (™Joe Lanza) Marty and Sarah Love Wrestling. It’s obviously not for me, and given there aren’t guests it’s not like there will be any big change in quality week-to-week. If you hear one show and like it, I imagine you’ll like most of it. It doesn’t seem fair to just pile on it week after week.

Yet another Eastern Lariat dropped just before press time, a Dylan solo show covering days 6 & 7 of the G1. I didn’t have time to listen (and I’m still behind in the G1) but it’s probably good.

The podcast week in review, brought to you by Buffalo Bill Cody Beer (or our Amazon and WWE affiliate links).

The Tiki Bar #6 (7/23/16): Tama is back with Bad Luck Fale, first doing their interview in a Shabu-Shabu joint before moving to the peace and quiet of the Tokyo Dome Hotel. They talk honestly about the talent exodus at the beginning of the year, the G1 tour, and more about their time in the NJPW dojo. That last topic is the most interesting, as you hear about Jado being a brutal trainer and Fale almost dying from heatstroke. Fale isn’t the most charismatic guy but he has a loose chemistry with Tama and this is a solid listen. THUMBS UP

Eastern Lariat #22 (7/23/16): I guess this show is weekly now (actually, much more frequent than that this week). The main focus of this episode is the G1 and the Super J Cup, discussing booking disappointments, who has looked good, and a lot more. If you can tear yourself away from all the wrestling it’s a good listen. THUMBS UP

VIP Lounge (7/24/16): MVP and Alex run down this year’s list of G1 participants, and that’s about it. You wish some of their puro knowledge was a little sharper (not knowing who Nakajima is, for instance), but MVP has had a lot of personal interaction with nearly all the participants, and you pick up a lot of fun stories and tidbits (Marufuji drives an Escalade! Yuji Nagata drinks turtle blood!). MVP also drops the scoop that while he could be interested in a return to the WWE, no contract has as of yet been signed. THUMBS UP

The Card is Going To Change #7 (7/25/16): Booking territorial wrestlers for a modern independent is the theme of this week’s show. John and Chandler talk cold calling Bunkhouse Buck, mending fences between Robert Fuller and Missy Hyatt, booking Dennis Stamp, and hanging out with Terry Funk. The stories aren’t as jaw dropping as last week, but they are actually fairly heartwarming, which is almost just as good. THUMBS UP

Steve Austin Show #345 (7/26/16): Gabriel “Fluffy” Iglesias returns to the show. He and Steve talk about his huge house, Pokemon Go, collecting cars, his TV show “Fluffy Breaks Even,” and more. Iglesias’ last appearance was a lot better, and outside of some stories about bombing at corporate events, there aren’t a lot of laughs to be found here.  THUMBS DOWN

Eastern Lariat #23 (7/26/16): With such a busy week, Strigga and Dylan are back with another show. After a brief talk of Terry Funk’s history in Japan, they dive into Go Shiozaki’s lack of drawing power, thoughts on big Dragon Gate and Big Japan shows, and the state of the G1 after Day 5. Good discussion, and the extra effort is always appreciated. THUMBS UP

MLW Radio #237 (7/26/16): Court and MSL are by themselves this week to run down the New Era of the WWF, the draft, Finn Balor’s big push & Vince’s love of Irish wrestlers (a weirdly compelling point), Alberto Del Rio’s future, AJ Styles place in the company, and more. And on the non-WWE side, we get talk about the Super J Cup, Stardom, the G1, and even more. A fun, comprehensive show about a crazy week. THUMBS UP

The Ross Report #128 (7/26/16): JR talks to the Torch’s Bruce Mitchell about the draft, Battleground, the first Raw of the New Era, and the state of WWE today. Mitchell is fine, but it’s not a memorable conversation and neither man has any great insight. Much better are the parts discussing Bruce’s trip to the Waterloo Hall of Fame and the upcoming NWA Legends Fanfest. [Mitchell’ interview starts at 2:20] THUMBS IN THE MIDDLE

Talk is Jericho #268 (7/27/16): Comedian and co-star on “But I’m Chris Jericho” Andy Kindler joins Y2J. They chat about hack comedians, doing voicework on Bob’s Burgers, working with David Letterman and Ray Romano, the state of stand-up today, being mistaken for the WWF’s Jamison, and more. Again, for a professional comedian, no real laughs to be found here. [Kindler’s interview starts at 5:03] THUMBS DOWN

Bischoff on Wrestling #1 (7/27/16): Eazy-E joins the podcast game, joined by Nick Hausman, who quickly found a new home after Bret Hart closed shop. They run though some current events, like Brock’s drug suspension, the New Era of WWE, Sasha Banks as WWE champ, dirt sheets, and more. It’s OK, but even with all his past experience I don’t know if Bischoff adds a lot to the podcast genre. Given it’s his first show, we’ll see how he progresses. THUMBS IN THE MIDDLE

Ric Flair Show #4 (7/27/16): Part 2 with Shawn Michaels, and this show the topics covered include Flair’s last match with Shawn, whether Flair regrets wrestling again in TNA (spoiler: yes), why he never went to WCW, teaming with God against Vince and Shane, and more. As like last week, the interview segment is actually fairly short, but the rest of show, with Flair’s thoughts on Dusty Rhodes’ final title win, are still worth hearing. THUMBS UP

Art of Wrestling #311 (7/28/16): Sabu talks to Colt about his childhood, his uncle the Sheik, working in FMW, crazy stips and insane moves, whether he has any regrets, working in ECW, negotiating with Vince McMahon, and a lot more. Sabu is actually a witty guy (he had lots of quips that could have been quote of the week) and he’s open with Colt, and while I thought this could be a train wreck it’s very enjoyable. THUMBS UP & BEST OF THE WEEK

The Steve Austin Show – Unleashed! #346 (7/28/16): Part 2 with Bill Burr and a good chunk of the interview is about learning to fly helicopters, which really did nothing for me. The parts about evolving his comedy working on his Netflix show, and flying on airplanes are much better. Steve also challenges a fly to a fight at WrestleMania.  THUMBS IN THE MIDDLE

Jim Cornette Experience #139 (7/28/16) After a lengthy intro covering guns and the Democratic Convention, Jim and Brian welcome lawyer and author Scott Williams. The crux of the discussion is about the recent lawsuit filed against the WWE, so there’s a lot of talk of CTE and the IRS’ 20 point test for independent contractors. I understand the discussion but it is pretty dry overall. Much better is the end where Williams discusses his experiences writing wrestling biographies. [Williams’ interview starts at 44:58] THUMBS IN THE MIDDLE

Keepin’ it 100 #4 (7/28/16): A cornucopia of content this week, as Rey Mysterio joins the crew to talk about Monday Night Raw, Matt Waldman shows up for a quick fantasy football chat, a taped message from the Insane Clown Posse and producer Kevin’s experiences at the Gathering of the Juggalos, Mark Hunt, politics, and Juventud Guerrera shows up to talk…stuff. This really feels like an old morning radio show without the music, but roughly a hundred times better. THUMBS UP

Talk is Jericho #269 (7/29/16): Shinsuke Nakamura sits down with Jericho after a match in Japan. For those of you wondering, Nakamura speaks English very well and you’ll have no problem listening to this show.  They talk about Nakamura’s influences, wrestling in Mexico, influences including Michael Jackson and Freddie Mercury, coming to America, surfing, meeting Vince McMahon, and more. Nakamura is as cool in podcast form as he is in the ring. [Nakamura’s interview starts at 4:25] THUMBS UP

MSL & Sullivan Show (7/29/16): No Nitro review this week, as it’s just current events and listener questions. They talk about the Brand Split (comparing it to the Nitro/Thunder split), Backlash on 9/11, and the Dolph/Ziggler match for Summerslam, then take questions on entrances, finishers, non-wrestlers breaking in, and more. Not up to the usual level, as I didn’t think the questions were any great shakes. THUMBS IN THE MIDDLE

Wrestlenomics Radio: CM Punk victorious in court, not in UFC