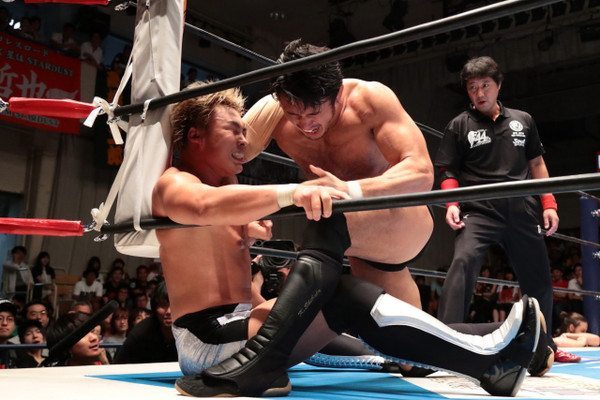 I’ve just returned from Korakuen Hall where I attended my first ever G1 Climax show.

The show sold out completely this afternoon. I’m pretty sure this was the biggest NJPW crowd I’ve seen in Korakuen since New Year Dash.

My Team NJPW (fan club) membership got me the opportunity to take a picture with one of my favorite NJPW wrestlers, Satoshi Kojima. I worked up a whole spiel in Japanese about how I’ve been watching him since 2001. Unexpectedly, Koji-san greeted me in English and our enjoyable encounter was over before I knew it. I definitely recommend signing up for Team NJPW if you live in Japan. You get first access to tickets and opportunities to meet the wrestlers. NJPW is different from most other promotions in Japan in that the wrestlers are not usually working merch tables at shows.

You’ll be getting a full review of the matches on the card separately, but I wanted to give my live perspective on a few performances.

Kenny sent out a tweet earlier in the evening playing off his tag encounter from last night:

I absolutely hate comedy and thus I will do the IWC proud by being 100% serious tonight. #g126

I don’t attend NJPW shows to see comedy matches. I definitely didn’t go to this G1 Climax show to see comedy matches. This in mind, Kenny Omega and Toru Yano had one of the most entertaining matches of the night in an entirely comedy-based match. Kenny tried some comedy early in his NJPW run, but it didn’t really get over. Now much more comfortable in his “Cleaner” character, Omega was right at home in this match. Kenny and Yano worked very well together and the crowd ate the match up; a great change of pace before the final two matches of the show.

Katsuhiko works basically all of his matches as one of the most beloved fan favorites in NOAH. Hold your NOAH jokes please. This match was entirely different, however, as the crowd was wholeheartedly behind his opponent Katsuyori Shibata. This match got off to a methodical and measured start. At one point, Katsuhiko tried to rally up the crowd by slapping the turnbuckle pad, but got a weaker than desired reaction. He tried again to another mild response. This was the turning point in the match and it sparked great on-the-fly match building from Nakajima. From here Katsuhiko got some great heat from the crowd by doing Shibata’s corner elbows/dropkick spot. The crowd was into the match from this point on; even more behind their home team favorite, Shibata. The match ended up being a great example of NJPW’s strong style and my highlight of the G1 so far. I get the feeling that we’ll be seeing these two tie up again.

NJPW has a “call leader” at most, if not all, shows. His job is simple: start chants for the babyface and get the crowd into matches. Tetsuya Naito has had a stronghold on Tokyo crowds for most of the year. However, perhaps unnecessarily , every chant the call leader started in this match was for Naito. Without any “piped-in” support, Elgin gradually won over the Korakuen crowd with his amazing, power-based offense and strong strikes. He had the crowd in the palm of his hand by the end of the match. This match had one of the best closing stretches you will see anywhere in the world. Not to undersell him, Naito was great in the match, but Elgin stood out in his strongest showing in NJPW to date; a great G1 main event at Korakuen.

I’ll be attending the last night of league matches and the final in Ryogkoku Kokugikan.