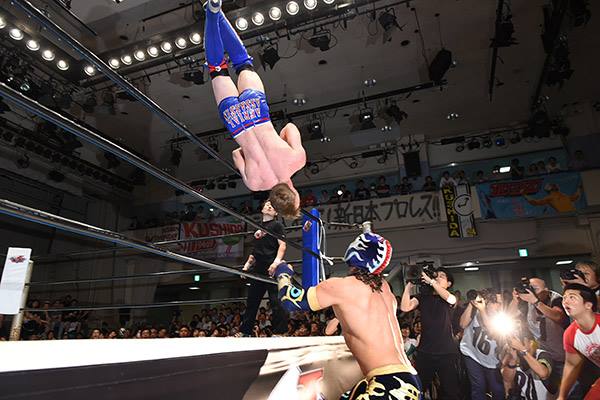 22 years after the inaugural and historic Super J Cup, the juniors return back to prominence for the sixth incarnation of the tournament. Jushin Thunder Liger returns for his fifth appearance in the tournament, having only missed the 2004 version hosted by Osaka Pro. He will battle Eita, the third Dragon System member to make his appearance in the tournament, following CIMA in 2000 and YAMATO in 2009. On paper, that could be the match of the night. For more information on all of the competitors, check out this great preview from JoJo Remy.

I consider myself to be an avid viewer of puroresu. I try to watch every company’s pimped matches that I can get my hands on. That being said, there’s only so much time in the day and eventually things have to get cut. K-Dojo, 10 out of 10 times, gets cut, so this is my first time seeing Mr. Tomato. He was wildly impressive, however. He put up a fight, making Sydal’s life more difficult than I’m sure he would have liked for a first round match. Tomato looked much more crisp than I expected him to. I don’t know if he was having the performance of his life or if he normally looks like this, but he was nothing short of great, surprising the crowd with a handful of deep two counts and surviving a disgusting Meteora from Sydal before finally being finished off with a Shooting Sydal Press. Hot opener. ***1/4

I am always excited to see Kenou have some sort of a high profile match. When he works hard, he’s great. Here, he worked hard. Gurukun Mask falls into the same category as Mr. Tomato from the opening bout, as this is my first time seeing him in action. For this match, Gurukun delivered. Knowing everyone else in the tournament, I think I can say he’s the least talented guy in the field, but he worked hard and I ended up really enjoying this match. They kept me invested the entire time as there was always a glimmer of hope for Gurukun. He matched kicks with Kenou, took him out with a dive at one point, and did all he could before finally falling to Kenou’s dreaded finisher. Very enjoyable match. ***1/2

Well, it can’t get any worse than this. Taichi stinks. His entrance may have actually gone longer than Sydal vs. Tomato did. I like Aoyagi, but he’s unpolished, and so putting him in there with Taichi meant that this was going to be ugly, and it was. Skip it. It’s Taichi stalling for a majority of the match. I can skip past this stuff in NOAH, but I was forced to watch it here. You, however, should skip it. *1/2

Eita is the third man to represent the Dragon System in the J Cup, following CIMA in 2000 for then Toryumon and then YAMATO in 2009. CIMA made it to the finals in 2000 before losing to none other than Jushin Thunder Liger, and nine years later YAMATO went deep, falling to Prince Devitt—now RAW superstar Finn Balor—in the semi-finals. I expected Eita to go over here. I thought it was nothing short of a lock. It would have made sense. It would have been a huge upset. This, also, is my unbiased opinion, as of course I would have loved to have seen a Dragon Gate guy go deep again. Eita jumped Liger at the bell, which was a thing of beauty, and then proceeded to lay the beatdown on the 51 year old legend.

Somewhere early on in what was a shockingly short match, Eita was busted open hardway and the gash that followed was disgusting. He never poured, but that cut was gross. Liger, upset with the way that the youngster had attacked him early on, went into full-on Grandpa Liger mode and showed the young whippersnapper a lesson or two. The Brainbuster on the floor to the already bleeding Eita was a nice touch.

Liger escaped the Numero Uno, which is one of the most protected submissions in wrestling, and soon after, delivered another brutal Brainbuster to Eita, this one for the three count.

This delivered as much as I thought it would. Eita is having the best year of his career, which is a really high bar, and Liger, at 51, is still killing it. The result of Liger going over, however, sucked the air out of me. I wanted Eita to win so badly. It would have done wonders for him. A bloody Eita standing over Liger in the middle of Korakuen Hall – my God, give that to me! I love Liger, but no, this was not his time to go over! This would have been a complete star-making performance for Eita had he tapped out Liger. Even with the loss, Liger put him over and Korakuen Hall chanted Eita’s name as he left, but this was so disappointing. Amazing match, wrong finish. Now go grab that Brave Gate belt at Kobe World, Eita. ****1/4

Will Ospreay [CHAOS/NJPW] vs. Titan [CMLL]

These are two of the most fearless flyers in wrestling and they delivered an athletic display that I very much enjoyed. Again, would have loved to have seen this go a little longer and as much as I like Ospreay (despite loathing his new bike shorts), I would have enjoyed someone not in New Japan or NOAH to advance, but I can’t complain – it’s the year of Ospreay, I understand. Fun sprint to bring us out of intermission. ***1/4

Interesting contrast here as BUSHI is one of the hardest workers in wrestling on a nightly basis and Kanemaru is not. They met in the middle for this one. BUSHI outworked him, both in effort and skill, but that didn’t stop the veteran from taking the victory here. BUSHI continues to get snubbed in tournaments which is a major bummer. Wanted to see him do some damage here and that didn’t happen. At this point he’s in the conversation for Most Underrated in the WON Awards. A fine match. ***

Taguchi had an amazing run in the Best of the Super Juniors this year, and sadly, I don’t feel like that carried over into this first round bout. This annoys me on a level different from Liger vs. Eita – this bugs me just because I wildly prefer Harada over Taguchi and I feel that he would have delivered a much better second round match against whoever he may face. This was fine, again. Never hit that next level, despite it trying to with Harada kicking out of a Dodon at one point. Harada takes a very disappointing loss in another good match. ***1/2

Well, the match that needed to deliver certainly delivered. KUSHIDA is having one hell of a year and one that needs to put him in the conversation for Most Outstanding Wrestler. Ishimori is a great talent. He was great here, putting forth a valiant effort here against the toughest junior heavyweight in Japan. One thing that amazes me is that KUSHIDA is delivering in so many different in-ring aspects. He gets praise for his flying abilities, I love the way he sells, but I think the most compelling part of his game is his grappling. He sucks me in when he grapples, something not many guys, especially juniors, can do. Very much enjoyed him here. Great main event, one that everyone should seek out. ****

I can see how some will be disappointed in this show. It wasn’t a Show of the Year Contender and there was at least one match with groan-inducing booking, that being Eita vs. Liger, but this show blew by and delivered two great matches. It delivered as much as it should have. Sure, the second round is literally NOAH and New Japan guys, but you know what, there are really talented guys in that field. Everything besides the Taichi match is worth watching. Thumbs up. 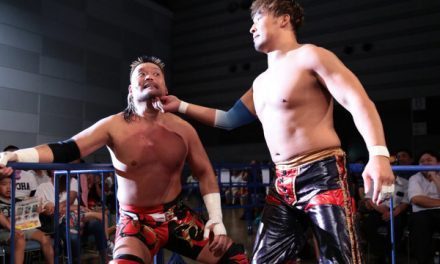 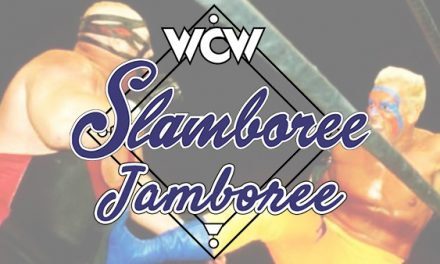