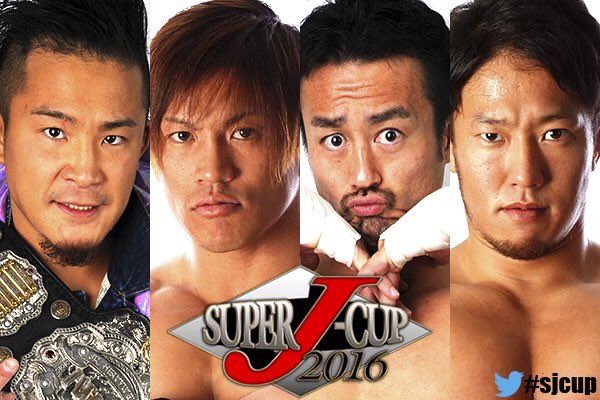 Thanks to a high school classmate that traded tapes, I’ve been following Japanese pro wrestling since 1999. One of the first tapes he shared was a compilation featuring Rey Mysterio Jr vs Psychosis from WAR’s Super J-CUP in 1995. I was familiar with Rey and Psychosis from WCW and ECW, but this non-tournament match was different. At that point in my life, I’d never seen wrestling in-person. The lack of commentary for this match brought the Sumo Hall crowd to the forefront; this was something entirely new and exciting to me.

17 years later, I’m currently living in Tokyo and will be attending New Japan Pro Wrestling’s SUPER J-CUP 6th Stage at Korakuen Hall. The first round—taking place July 20—will feature eight singles matches. The final three rounds of the single-elimination tournament will be held at Tokyo’s Ariake Coliseum on Sunday, August 21. The following preview is intended to familiarize readers with the participants and their recent singles work.

Matt Sydal, 33, “representing” Ring of Honor, has been a regular competitor in Japan for most of his non-WWE career. Sydal originally toured with Dragon Gate, and more recently with NJPW where he holds the NEVER 6-man Tag titles with Satoshi Kojima and Ricochet. Though most of his recent success has come in tag matches, Sydal is an accomplished singles wrestler known for his aerial attack and unique offense. Sydal had a great match with KUSHIDA in this year’s Best of the Super Juniors: http://njpwworld.com/p/s_series_00392_8_08

Representing Kaientai Dojo, 29 year-old Kaji Tomato was trained by 1994 J-CUP competitor TAKA Michinoku. Tomato is a 4-time UWA World Middleweight champ in Kaientai Dojo. I was hoping to see Ayato Yoshida in this spot based on his performance at LION’S GATE PROJECT2 in May. The more senior Tomato was rewarded this spot by beating Yoshida in K-Dojo’s qualifying match. Tomato displayed sound psychology, even if that’s not exactly the top reason to watch this tournament: https://rutube.ru/video/9891cf404f1cdb5170f0a4c0a2ae6e6e/

I expect an easy Sydal win here, and I’m looking forward to a potential second round match up with Will Ospreay; one of Sydal’s best singles opponents.

The 44-year old Gurukun Mask has been working in various independents around Japan for more than a decade. Based out of Okinawa’s Ryukyu Dragon Pro Wrestling, Gurukun’s entry comes at the recommendation of fellow competitor, Jushin Thunder Liger.

Most of Kenou’s success in his home promotion of NOAH has come in the Jr. Tag division as a 2-time champ with long-time partner, Hajime Ohara. Kenou was a Japanese kenpou karate champion;  scouted and trained to wrestle by Jinsei Shinzaki of Michinoku Pro. Kenou uses hard kicks and overall grumpiness to win matches. Now 31, and a NOAH regular since 2014, Kenou officially joined the NOAH roster in 2015. He earned his spot in the J-CUP by defeating Genba Hirayanagi on July 5 in NOAH’s qualifying tournament. Kenou and Ohara had an excellent singles match at NOAH’s Ota show in December 2015: http://www.dailymotion.com/video/x3k181z_kenoh-vs-hajime-ohara-noah_sport

The Kenou/Gurukun Mask matchup is an interesting one. The two crossed paths a few times in 2012 in (1994 J-CUP entrant) Super Delfin’s Okinawa Pro. Kenou is usually a big fan favorite in Korakuen Hall and should move on easily here.

This spot was originally announced for ZERO-ONE, but was changed in subsequent press releases. 20 year-old Yuma Aoyagi will be competing on behalf of AJPW. In addition to being the youngest in the field, Aoyagi is also the tallest, at 6’1” (186 cm). This leads me to believe that he’s not long for the junior division. Despite having about two years of experience, Aoyagi shows fire and is impressive defensively (bumping). AJPW has been operating completely independently of NJPW for some time, so Aoyagi’s participation will be noteworthy if it leads to more cooperation between Japan’s two oldest promotions. Perhaps Aoyagi will show up on the card for September’s LION’S GATE PROJECT3.

Aoyagi is still very much a young boy, but is clearly ahead of current NJPW young lions. He recently had a compelling match with the aforementioned Yoshida: https://rutube.ru/video/537c89e0841c38c5351d1f52a4f5158e/

Once an AJPW dojo young boy himself, Taichi (now 36) makes his third consecutive appearance in the SUPER J-CUP. Taichi’s two previous entries ended in the first round. Affiliated with Suzuki-gun for over 5 years now, Taichi gained entry into this year’s J-CUP in a 4-man round robin. I’m usually not into Taichi’s matches due to the played out shtick, but I really enjoyed his match with Taiji Ishimori from last December (http://www.dailymotion.com/video/x3jxf23).

From what I can tell, a win here would be Aoyagi’s fifth ever singles win in his young career, and most certainly his biggest. It’s likely that we see some shenanigans here. Taichi isn’t hurt too much by an upset, but I expect him to win here anyway.

Living legend Jushin Thunder Liger is the best known entrant in this year’s Super J-CUP. This is Liger’s 5th J-CUP, having only missed Osaka Pro’s 4th Stage in 2004. Liger reached the semifinals in NJPW’s inaugural J-CUP in 1994. He followed that up with two consecutive victories: WAR’s 2nd Stage in 1995 and Michinoku Pro’s 3rd Stage in 2000. Settled into a less prominent role, 2009 saw Liger exit in the opening round to eventual winner Naomichi Marufuji in NJPW’s 5th Stage.

J-CUP history aside, even at 51 years old, Liger reminded the world that he is still a world-class worker with a memorable performance against KUSHIDA earlier this year at NJPW’s Wrestling Dontaku: http://njpwworld.com/p/s_series_00390_1_07

In the first round, Liger faces Dragon Gate’s Eita. Eita, 24, is a 5-year veteran a graduate of the Dragon Gate dojo. In his home promotion, Eita is currently aligned with 2000 J-CUP finalist and Dragon Gate boss, CIMA. Until recently, most of Eita’s success in Dragon Gate had come in the tag and 6-man divisions, but that will likely change soon.

Eita has had his share of impressive singles matches in 2016; highlighted by his two King of Gate matches against Akira Tozawa. Their match in May was probably the most emotional match I’ve seen at Korakuen all year: http://www.dailymotion.com/video/x4dcwzj & https://rutube.ru/video/b46c4acf07baeb1a4ee987ede37cc5cb/

Liger and Eita are a perfect matchup for this year’s J-CUP. From a style perspective, Liger is a virtual Swiss-army knife, but also a perfect foil for Eita’s llave offense. From a booking perspective, there’s no wrong choice, but I expect an Eita win to add to his already strong 2016. This could be something really special if Dragon Gate fans turn up for this show.

Will Ospreay (NJPW) vs Titán (CMLL)

Titán is a 25-year old, well-rounded mid-card luchador from CMLL. NJPW has used Titán in the past: he scored 6 points in the 2013 Best of the Super Juniors. Titán is also a regular on the joint NJPW/CMLL FantasicaMania joint shows. I expect that with another impressive performance here, Titán could win a tour spot with NJPW later this year.

He had an exceptional match with Barbaro Cavernario on this year’s trip to Japan: http://njpwworld.com/p/s_series_00370_1_04

A relative newcomer to the Japanese wrestling scene, Will Ospreay debuted with New Japan this April at Invasion Attack. New Japan clearly recognizes the talent they have on their hands; Ospreay won the 2016 Best of the Super Juniors at the age of 23.

Not sure if there’s anyone who hasn’t seen his BOSJ match with Ricochet, but I’ll leave it here, just in case: http://njpwworld.com/p/s_series_00392_6_08

This is an attractive matchup; Ospreay is well versed in lucha and both men are elite flyers. Titán had the Korakuen crowd behind him in January, and Ospreay is quickly becoming a star. This match really has a chance to stand out in the first round. It’s a foregone conclusion that Ospreay wins here, and I have no doubt that he will.

2016 has seen the renaissance of Los Ingobernables de Japon’s BUSHI. The heel-turn has given him new life. Before his injury, BUSHI (33) was an afterthought in NJPW’s junior division. Now, he’s in the title picture and has more fan support than ever.

Suzuki-gun’s Yoshinobu Kanemaru is the most decorated junior heavyweight in NOAH history. As part of the original AJPW exodus in the summer of 2000, Kanemaru was crowned the inaugural GHC junior heavyweight champion the following year. Kanemaru is a 7-time (and current) GHC Jr. champ and a 4-time GHC Jr. Tag champ, and returned to NOAH earlier this year at the age of 39. This was an unpopular pick for a spot in this year’s J-CUP, as Kanemaru can be considered beyond his prime and generally unmotivated.

The BUSHI/Kanemaru matchup is fascinating, considering both guys primarily work heel in their home promotions. I expect BUSHI to have much more fan support in Korakuen. Unfortunately, I also expect shenanigans here, so I’m not that excited about the matchup. Kanemaru, NOAH champ, will probably take this one.

Ryusuke Taguchi has seen his share of success. He was a 5-time IWGP Jr. Tag champion in Apollo 55 with Prince Devitt and a 2-time IWGP Jr. champ. He competed in the 2009 5th Stage, losing to eventual winner Naomichi Marufuji in the semifinals. Taguchi has been used mostly in an undercard/comedy role over the last few years in NJPW, but surprised many with his standout performance in this year’s BOSJ (most notably with his performance in the finals against Will Ospreay): http://njpwworld.com/p/s_series_00392_11_08

Daisuke Harada is one the main players in Pro Wrestling NOAH’s junior division. He has held the GHC Jr. Tag titles on two occasions with Atsushi Kotoge and had a good run with the GHC Jr. Title in 2014. Before joining NOAH in mid-2013, Harada was a regular in Super Delfin’s Osaka Pro.

Although I was pulling for an Ohara win, I really enjoyed Harada’s qualifying match earlier this month (haven’t seen it surface in the usual places yet).

The matchup with Harada is a good one for Taguchi. I don’t expect too much comedy here. I’m looking forward to this match and would be surprised if Taguchi wins. Given the lineup for Night 1, and the pairing in the main event, I’m predicting this to be Harada’s first win en route to the finals of the tournament.

KUSHIDA should be no stranger to anyone here. He has been positioned as the ace of New Japan’s junior division since his victory over Kenny Omega at Wrestle Kingdom 10. KUSHIDA has risen to the occasion during this, his third and perhaps defining, title run. KUSHI has had multiple standout matches with a wide array of opponents this year. My favorite among them is his opening night BOSJ match against Kyle O’Reilly: http://njpwworld.com/p/s_series_00392_1_08

Taiji Ishimori is a 14-year pro trained by 1995 J-CUP competitor and junior legend, Ultimo Dragon. A NOAH regular since 2006, Ishimori also had brief runs with New Japan and All Japan early in his career. Ishimori hasn’t benefitted from good booking like KUSHIDA has this year. Ishimori won the GHC Jr. title last December in an emotional and exceptional match against Taichi (see link for Taichi), but quickly lost it in his second defense to the returning Kanemaru.

When the lineups were released, I was expecting this match to be saved until the finals. KUSHIDA is one of the elite singles wrestlers in the world and could have an excellent main event with nearly anyone in the tournament. The matchup against Ishimori raises the stakes and the expectations quite a bit, but I am confident these two will deliver. I would be really surprised by a KUSHIDA loss here. In my estimation, the two best outcomes for KUSHIDA’s role in this tournament are either for him to win the whole thing, or to put someone over in the finals in an effort to elevate a new star. 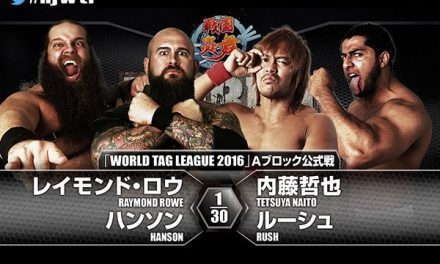 Music of the Mat #55: Masters of Dragon Gate 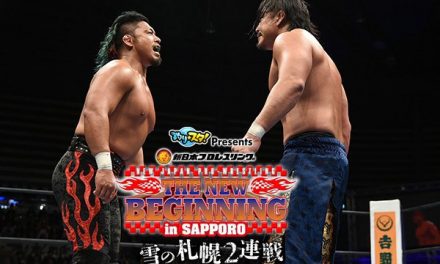