Tanahashi Teaches Us the Power of Feelings in Garo: Ashura 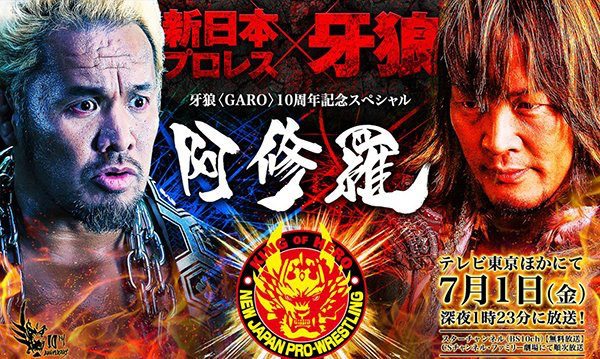 It wasn’t until very recently that I looked at Hiroshi Tanahashi and wanted to see him as the star of an ongoing tokusatsu series. Tokusatsu (“special filming” when translated to English) is the name for the special effects and rubber suit heavy entertainment of Japan. This includes things like Godzilla, Ultraman, and Gamera. There’s a sub-section of tokusatsu where the heroes will henshin, or transform, into a much more powerful, costumed version of themselves. Shows like Super Sentai (Power Rangers in the States) and Kamen Rider fit into this category. With the help of New Japan Pro Wrestling, another show of this same style, Garo, recently celebrated its 10th anniversary.

Garo hasn’t been one long series for these past 10 years, it’s been a collection of shorter series that all help make up the Garo mythos. Garo tells the stories of a group of people known as the Makai Knights and their battles against various monsters known as Horrors. The most powerful of all the knights takes on the title of Garo the Golden Knight. Garo: Ashura was a one-off special which featured Hiroshi Tanahashi and Togi Makabe as the hero and villain, respectively, of the story. This actually isn’t the first wrestling influenced tokusatsu this year. Earlier in 2016 there was an episode of Animal Sentai Zyuohger that featured two characters being forced to fight to the death in a wrestling ring in Korakuen Hall and later this year will see the release of a kaiju movie starring Kota Ibushi and Minoru Suzuki. Unlike those two, Garo: Ashura has New Japan’s stamp of approval all over it. The opening of the show features both the New Japan logo and a mash-up logo, proclaiming Garo to be the King of Hero (you may have seen that logo on a shirt if you follow Tanahashi on Twitter).

The show starts off with a woman telling her son a bedtime story about one of the powerful Makai Knights. We leave the child’s bedroom and enter a time long ago where Tanahashi wields a sword to fight a monster that looks oddly similar to the scorpion monster that the Rock turned into in The Mummy Returns. Tanahashi goes in for the killing blow on the beast, but falters for an instant to avoid hurting an innocent flower. What a hero this guy is, right? The monster uses this to its advantage and stabs the Ace of the Universe in the chest. Tanahashi is thrown backwards by the blow and he lies unconscious. The monster goes in for the killing blow, but is stopped by a force field of some kind. The scorpion thing takes a look at a mysterious statue nearby before skittering off into the forest.

A while later, Tanahashi wakes up in the home of a family that lived close to where his battle took place. We find out that Tana’s character is named Gouki (pronounced Go-key, like former American Idol contestant and now regional glasses chain spokesperson, Danny Gokey) and that he was rescued by a girl named Ren and her two brothers, Shin and Taku. The force field that saved Gouki earlier was created by a carving of a guardian spirit and thanks to that statue, Ren and her brothers were protected when an army of demons slaughtered everyone else in their village. Gouki is still sporting a pretty serious chest wound so he stays with the family for a while to recuperate. Ren and Taku are pretty taken with Gouki, while Shin is wary of him because he believes that anyone who wields a sword is no different than the beasts they fight.

Gouki heals up after some time and comes across the monster that injured him. We don’t get to see the return match between the two, but we are able to see the fiery explosion caused by Gouki’s victory. When the time comes for Gouki to depart from his hosts, some of the demons that attacked the village previously come back and capture Ren. Gouki then does what you would expect Tanahashi to do; he goes to save the girl from the bad guy’s crazy volcano lair.

Gouki bursts in and cuts down a bunch of demons with his giant sword. His assault is put to a stop when Makabe (with trademark chains around his neck) enters with the captive Ren at his side. I should note now, that unless I missed it, Makabe’s character is never given a name so I’ll just refer to him as Makabe. Gouki allows himself to be subdued by the demons to ensure the safety of the girl. The demons beat on Gouki for a while until Taku and Shin provide a distraction that allows Gouki to rip apart the chains that he is bound with. Gouki rescues Ren and then the fight is on between him and Makabe. They battle in a sword vs. chain duel until Gouki is able to slice apart Makabe’s chains. Makabe proves that he isn’t a one trick pony though. He transforms into a giant Balrog looking demon and turns the tide of the battle. Gouki decides that now is the time to reveal that he has another form as well and transforms into Garo the Golden Knight.

Garo takes the advantage until Makabe goes after the family that saved Gouki. Garo takes some bad hits to defend the family and finds himself on the ropes. Shin recognizes that Garo is in trouble so he has his siblings fill a stone with their feelings to give power to Garo. Ren throws the stone and it hits Makabe instead, but the power of the feelings flows out of the shattered stone and into Garo giving him a massive power up. Garo sprouts wings and then proceeds to trounce Makabe. The end of the battle comes when Garo flies high into the air and then does what we were all hoping would happen. In one of the greatest scenes in cinematic history, Garo destroys Makabe with a devastating High Fly Flow.

With the monsters defeated and everyone back home safe, Gouki says his goodbyes to his new friends. They thank Gouki for saving them and he returns the thanks, because if it hadn’t been for the power of their feelings, Gouki wouldn’t have been able to defeat Makabe. Gouki gives his friends the signature Tanahashi hand gesture and then heads off to continue his service as a Makai Knight. At the end of the episode we find out that the boy being told the story is named Raiga. This is important to note because that little boy will eventually grow up to bear the title of Garo himself in the fourth series, Garo: Makai no Hana. Like so many others, Raiga grew up wanting to be Tanahashi.

If you couldn’t tell, feelings were a big theme of Garo: Ashura. At one point in the show, Tanahashi is talking with Shin about the nature of the statue that resides on their property. “It’s not a guardian spirit that protects your family,” says Gouki. “It’s the feelings infused into the statue. Feelings are what shape the nature of objects. That goes for the statue and this sword you hate.” The same can be said for wrestlers. So many of our opinions of wrestlers are fueled on what they make us feel. Let’s use Tanahashi for instance. The LOL TANAHASHI WINS meme is a popular one among Puro fans even though what it represents isn’t really true. Tana doesn’t always win like most of his detractors would have you believe. If that was true, he would have beaten Okada at WK10, won the Intercontinental Championship instead of Kenny Omega, and he wouldn’t have spent the summer of 2015 feuding with Yano. Our feelings regarding a wrestler will often lead to a confirmation bias where we only choose to recognize the data that backs up our feelings. TANAHASHI WINS (except for when he doesn’t), ROMAN SUCKS (because he’s not Daniel Bryan), CENA CAN’T WRESTLE (when he’s not putting in WOTY level performances), and the list goes on. Believing those things makes them just as true as believing that Gouki is a monster for wielding a sword. I doubt that the writers were intending to weave some wrestling meta commentary into their script, but it works nonetheless.

Even though this is a 10th anniversary special, the creators did a good job of making this easy enough to follow for new viewers who might just be tuning in for Tanahashi and Makabe.

Tana isn’t the greatest actor the world has ever seen, but he does fine in his role. You could say that he’s a bit stiff, though I would argue that it works for his stoic character. Makabe, on the other hand, feels like an absolute natural in his role. It seems fair to say that Makabe could have been an evil demon warlord in another life. He has the perfect laugh for an over the top bad guy. What might turn some viewers off is the heavy use of green screen effects in the show. Nearly every background in the show isn’t really there. The upside to this is that all of the backgrounds have a painted look giving the show a bit of a dreamlike quality that lends itself very well to the bedtime story that this is supposed to be.

Garo: Ashura might not be the favorite episode of the series for a diehard fan, but it’s more than serviceable for wrestling fans just checking it out for the novelty of seeing Tanahashi and Makabe in their roles. The fight scenes are fun and there is the perfect amount of camp that keeps the show from taking itself too seriously. Here’s hoping that in five years we can get a 15th anniversary special starring Okada and Naito about the power of love.

Why Comcast should buy WWE 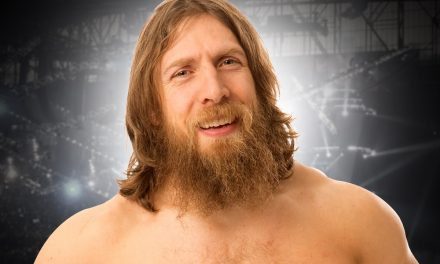