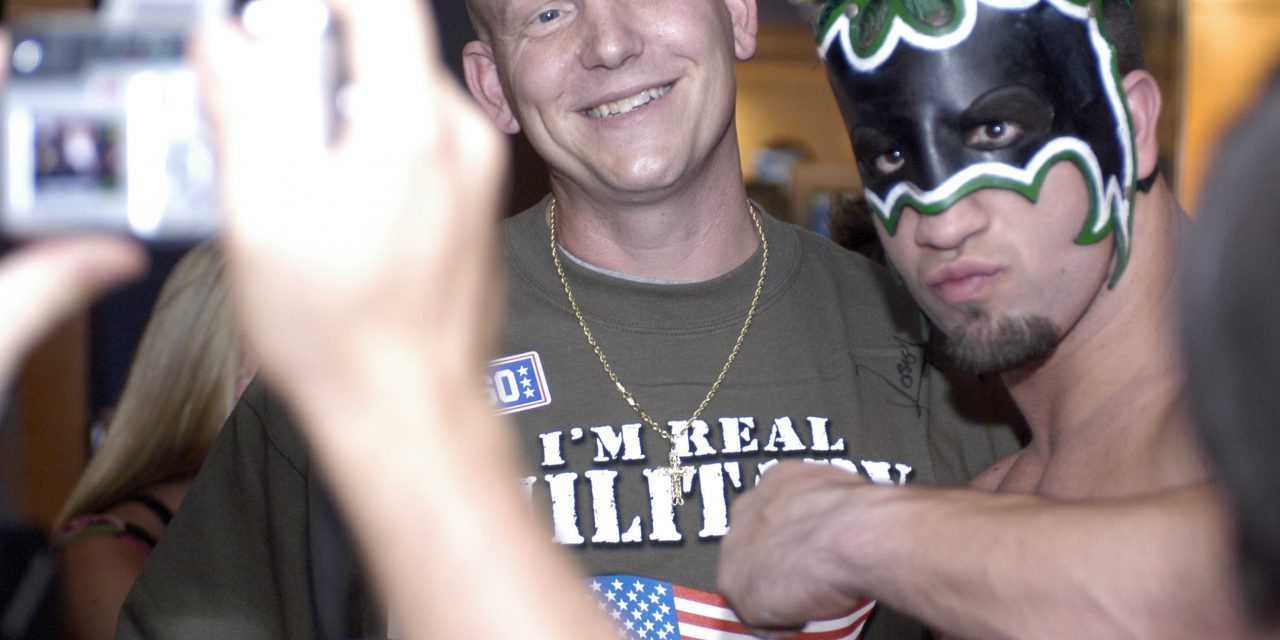 No Bauer & Pollock this week. The podcast week in review, brought to you by True Car (or Voices of Wrestling’s Amazon and WWEShop affiliate links).

The Tiki Bar #3 (7/2/16): Tama talks to his brother Tanga Loa while they’re in Mexico. Loa doesn’t add a lot to the conversation; Tonga really dominates the discussion talking about growing up in Tonga and how he came to the United States as part of Loa’s family, and how the two eventually bonded as brothers. The story of Tama went from being a wild child to moving to the States is interesting and has never been told, but Loa is a dud here. THUMBS IN THE MIDDLE

VIP Lounge (7/3/16): Alex has often talked about his admiration for UK wrestler Jimmy Havoc, so it’s no surprise he makes an appearance on the show. It’s a lengthy discussion largely centering around pro wrestling (with a good amount of Brexit talk as well) and the rise of the British scene, plus a very funny story of MVP thinking his original gear was a rib. The only sour note is that three times MVP rails against wrestling nerds, even pulling out the tired basement insult. It’s odd to rail against the people who would be the ones most likely to listen to your show, never mind the fact I enjoy a lot of fan podcasts a lot more than MVP’s. THUMBS UP

The Card is Going To Change #5 (7/4/16): John and Chandler talk about their recent show “What’s in the Basement, Klopek?” and all the hassles that went along with it. You hear about TNA talent suddenly being available, booking a wrestler (Flamita in this case) who doesn’t speak English, and doing business with Shane Douglas, the benefits of booking a surprise, and just what kind of car the Franchise drives. Good stuff. THUMBS UP

Steve Austin Show #339 (7/516): The Ricochet show finally airs after Steve has been promising it for a while. They talk about him getting into wrestling, his backyard days, his parents being huge fans, the controversial match with Will Osperay, rooming with Apollo Crews, thoughts on WWE, his future plans, and more. It’s a good conversation and Ricochet acquits himself quite well, and any show that has Steve talking about Chikara and Chuck Taylor gets a good grade. THUMBS UP

Bret Hart Radio #9 (7/5/16): Weirdly, they promise part 1 of an interview with Mickey Gall, but at the end of the show announce they’ve run out of time, which is weird because this is a podcast and not, say, a radio show with a specific schedule. But before that the gang talks about Brock Lesnar’s chances at UFC 200, Bob Backlund and how the Crossface Chicken Wing really feels, and Bret’s thoughts on his video game stats and opinion on Triple H (which makes the episode). The lack of an interview isn’t missed. THUMBS UP

MLW Radio #233 (7/1/16): Dave Meltzer is here, and fills in for Konnan admirably, as he too doesn’t show up until a few minutes into the show. He talks to Court and MSL about UFC 200, new talent coming into the WWE, 50/50 booking, WWE vs. the fans, building talent, and more. Not a ton here you haven’t heard if you listen to Dave’s regular podcasts, but as always it’s good to hear him outside of his usual parameters. THUMBS UP

The Ross Report #125 (7/5/16): Two guests for the price of one (which is free, but still…), as first Jeff Hardy makes a quick appearance, talking about the state of TNA. Then Eric Bischoff shows up for part 1 of a chat, discussing his 1990 WWF tryout, his dealings with Muhammad Ali, how he would deal with the Roman Reigns backlash, and smaller wrestlers. Fun interviews, but skip the intro as JR is in super grump mode, even throwing out a “keyboard warrior” reference. [Hardy’s interview starts at 21:35, Bischoff’s starts at 33:54] THUMBS UP

Talk is Jericho #262 (7/6/16): Stand back, Shane  Hurricane Helms is on TiJ. His chat with Jericho isn’t a comprehensive career, but focuses on the end of WCW up to the peak of the Hurricane character, including finding out WCW was sold, losing his first name and gaining the Hurricane gimmick, fighting Buff Bagwell, working with Rock and Steve Austin, drinking, transitioning to Gregory Helms, and more. Then they close out with talk of Impact Wrestling, being an agent, and fans’ skewed perceptions of TNA. Excellent interview; Helms is a witty guy with and there are plenty of amusing moments. [Helms’ interview starts at 7:53] THUMBS UP & BEST OF THE WEEK

Ric Flair Show #1 (7/6/16): Ric and Conrad are back! After a quick recap of the news, it’s part 1 of a talk with Cody Rhodes. They talk about Cody’s early impressions of Ric, amateur wrestling, Cody’s acting days, appearing on Arrow, Ric and Dusty’s classic NWA title matches, and whether Cody is still technically with the WWE. Ric would usually have a hard time with newer wrestlers then when interviewing his peers, but I enjoyed this. A good comeback show. THUMBS UP

Keepin’ it 100 #1 (7/6/16): The show opens with a litany of people (including Scott Hall, Colt Cabana, and Dave Meltzer!) burying Konnan. Then Disco Inferno shows up to talk about Raw and serve as cohost for the episode.  Juventud Guerrera stops by to talk about his recent UK excursion, then Konnan and Disco break down the Final Deletion. Chris Jericho joins to discuss the food fight on Raw, working Mil Mascaras, and the hopes for his podcast network. Mark Madden then joins to dump on Disco and talk the current state of wrestling. I enjoyed this, the assorted guests kept this moving at a fast pace. THUMBS UP

Art of Wrestling #308 (7/7/16): Longtime wrestler “Jumping” Jim Brunzell is the guest this week. He talks about being pals with Bruce Springsteen, his time teaming with Greg Gagne, having to leave the AWA, run-ins with booker George Scott, the Killer Bees tag team, training with Verne, realizing it was time to retire, and a lot more. This one is really good, with anecdotes about Ric Flair, Hulk Hogan, Dusty Rhodes and a lot more, and also Brunzell’s “oh golly gee” Midwest accent just cracks me up. THUMBS UP

The Steve Austin Show – Unleashed! #340 (7/7/16): Goldberg is back yet again, and this time he and Steve walk through Bill’s garage and talk cars for the whole episode. That’s it. That’s the show. THUMBS DOWN

Jim Cornette Experience #136 (7/7/16): Dan “The Beast” Severn talks to Jim and Brian about his glory days in amateur wrestling, competing against “Dr. Death” Steve Williams as an amateur, going to Japan early in his career, the wild west days of UFC, working with Jim in Ring of Honor, traveling, and his thoughts on Brock Lesnar’s upcoming fight. Pretty decent listen, but Dan can be a bit dry at points. And if you’re wondering, no comment at all from Jim about the Final Deletion, so hopefully he sees it by next week. [Severn’s interview starts at 28:27] THUMBS IN THE MIDDLE

Marty & Sarah Love Wrestling #4 (7/7/16): Marty and Sarah talk the Final Deletion, Dean/Renee Unfiltered, Raw, F/M/K, and more. I could see if this show was a quick half hour, but almost 90 minutes? THUMBS DOWN

Talk is Jericho #263 (7/8/16): KISS drummer Eric Singer is the latest member of the band to be on TiJ. He and Chris talk about drumming in a high society band with his father, seeing Kiss in Cleveland in the 70’s, playing in Black Sabbath, getting to be the KISS drummer and getting replaced in 1996, coming back and wearing makeup for the first time, whether KISS will ever end, and a lot more. I liked this quite a lot; Singer has a lot of great stories even if you’re not a huge KISS fan. [Singer’s interview starts at 7:00] THUMBS UP

MSL & Sullivan Show (7/8/16): Kevin and MSL start the show discussing tall tales in wrestling (fertile ground if there ever was one), the arrival of Ric Flair to the MLW family, the interesting dynamics of the Wyatt/New Day feud, and UFC/WWE cross promotion. Then it’s a review of the October 28th, 1996 Nitro, and Kevin’s original plans for Sting and Nick Patrick getting so much TV time. Then it’s a mailbag with more on the legend of Joe Gomez, Sherri Martel, strong wrestlers, and falling out of love with wrestling. The usual good stuff. [The Nitro review starts at 30:00] THUMBS UP

Bret Hart Radio #10 (7/8/16): We get a squirrel update to start, and an explanation of what the Canadian Stampede is. Then we get the full Mickey Gall interview, which Bret hilariously takes over and just goes on and on about the WrestleMania XIII match against Steve Austin. Beyond that, nothing of note here. THUMBS DOWN

New Japan Purocast (7/5/16): Colin and Joe run down the NJPW Kizuna Road show and preview the blocks for the upcoming G1 Climax.

Open the Voice Gate #7 (7/6/16): The gang is finally back to wrap up King of Gate, preview the upcoming Kouraken show, and discuss the announced matches for this year’s big Kobe World Event.

Voices of Wrestling (7/8/16): Joe and Rich break down the Final Deletion, the Super J Cup field, King of Gate, the Cruiserweight Classic, NJPW Kizuna Road show, and much more!