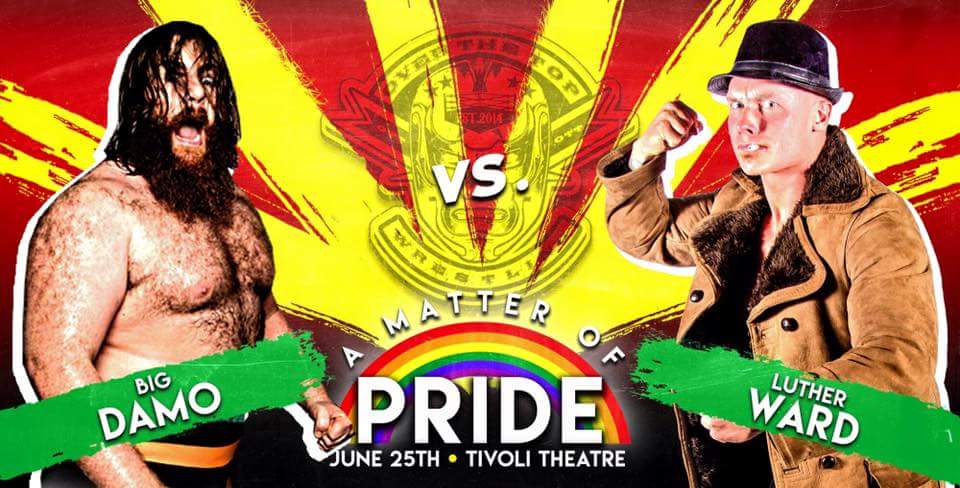 Over The Top Wrestling
A Matter of Pride
June 25, 2016
Tivoli Theatre
Dublin, Ireland

The show opens with Pete Dunne, whose top-knot is no more (he has his hair cut into a somehow worse haircut) and is greeted with hatred as always by the crowd. El Ligero gets a warm welcome from the crowd on this his first outing for OTT, though I’d imagine some of the crowd had seen him wrestle for other companies in Ireland or the UK before. Dunne attacks Ligero when making his entrance.

This starts off very fast paced with Ligero making his comeback early. Ligero works his speed while Dunne tries to slow the pace down with big chops and sick joint manipulation. Dunne’s dirty side comes out as he looks to set Ligero up for a surfboard but bites his finger instead and leers for the fingers of trusty OTT referee Niall Fox also. Match ends as Ligero hits a splash from the top rope but gets cut off at two, Dunne throws the ref in the way low blows Ligero and hits him with his Drop Dead finisher.  Ligero looked great in his debut but was out wrestled and out smarted by Pete on this occasion. Really strong opener, could have been match of the night on many nights but not tonight.

Angel Cruz come out first and is upset that not only does he have to beat the Kings of the North to get his title shot but both Nicky and one of his security guards have gone missing today. Nicky comes out to massive reaction draped in the Pride flag accompanied by the MIA security guard who has now embraced the lifestyle, looking like a mini Nicky .

The Kings are hated as always and get jeered about Brexit and Northern Ireland losing to Wales earlier in the night. Corvin roars abuse into the camera and Bonesaw rips a fan’s “Brexit home sign”. Bonesaw is the most terrifying man in wrestling in my opinion. Like, if he got angry and shouted at you, you would wet yourself.

Bonesaw is not having any of the homoerotic chain wrestling that Nicky usually uses to freak out his opponents and overpowers Nicky easily. The Kings tag in and out repeatedly beating the crap out of The Fabulous One and has success in keeping his away from his partner. Finally Nicky breaks free and gets to Cruz who is distracted by the fans. Nicky continues to take a beating by the Kings who look so strong here until he finally breaks away again for the tag. Cruz come flying into the match hitting multiple aerial assaults, flying knees, shins and a big 1 legged dropkicks from the top rope. Nicky blind tags back in and hits a Yosuke Santa Maria like Rough Ryder and Cruz goes for a chair to finish the job but Nicky stops him while the pair are distracted arguing the Kings make their comeback and finish with a double team boot assisted flapjack. The Crowd are sad as tonight is Dublin Pride and it would have been a great fit for Nicky to get the win.

It felt like Tyler was pretty much an unknown to the Tivoli crowd bar a few small pockets. That was about to change here. Both Jordan and Tyler looked are matched size wise. The whole match was well thought out, slow and methodical, both Jordan and Tyler trying to reverse and counter reach others holds in amazement of each other. At one point Jordan gave up and said “I have nothing” and was let out of the hold by Tyler and they switched positions Tyler showing Jordan how to get out of the hold (squats to distract/loosen then steps out). It was different to any match ever seen in the Tivoli before I don’t believe a single strike was thrown  for a solid ten minutes, until they started unleashing some handsome European Uppercuts.  This was Grapplefuck at its finest.

The crowd chanted “sexy wrestling” and they were right. Jordan won with a quick roll up finish out of the blue. There was pure sportsmanship from start to finish and they got a standing ovation from crowd. It’s hard to believe Tyler is only 19 not because he looks older.

Tyler is an absolute prodigy it is not right for a child to be this good at the wrestling.

Jordan looked great here too as he met an almost perfect match in Tyler. I think the pair could genuinely tour the match/feud, it was that good. Tyler’s stock has been rising sharply since the beginning of the year and Jordan is more than ready to take on the big European tournaments.

After the match Jordan turned heel and hit Tyler with a big lariat and package piledriver. Jordan cuts a great aggressive promo saying he’s sick on being on the undercard and sick of overpaid UK/US wrestlers coming over here and walking into the main event.

This was a great comedy match which told the story of clean cut American Colt Cabana somehow finding himself teaming up with nice guy/Dublin junkie Workie to go against OTT’s tag champions and resident loveable fools: the Gymnasties.

Cabana is usually the driving force when it comes to his comedy matches but here had to share the stage with comedy acts who can more than hold their own and more than hilarious in their own right.

Colt seems massively confused by Workie and the crowd’s reaction to him throughout the match but you can tell he’s enjoying teaming with him. There’s a lot of play on Workies bag of recreational powder teasing the will Colt/won’t Colt aspect. I won’t ruin most the comedy but the thing that made me laugh the hardest was the crowd chant of “Wellness” and “Workie Reigns” only for to B-Cool shout back at them “it’s ok we’re not going to WWE anytime soon”. I howled.

The Nasties are pretty hilarious all the way through here – their movements & reactions are on point and they’re a joy to watch. Colt plays the part of the smart veteran and Workie is just pretty fucked up.  This was a lot of fun live after a few cans, not sure if the VOD does it credit or it’s a case of its only funny first time round.

Martina “The session moth” comes out wearing an Ireland soccer jersey for the euros which we were still in at this point. Crowd love here and serenade her with football chants. Katey Harvey is becoming a semi regular on OTT after wrestling around Ireland for years, she plays the character of a bolshie young lady. Katey is not impressed by crowd or Martinas antics and tells the referee Niall Fox aka Foxy to check her pants for foreign objects. Foxy asks Martina to come clean and she pulls all the ingredients to a good night out of her personal area.

Match begins with test of strength between the two. It feels like Katey is trying to show the crowd she’s the real wrestler here in this pairing. The two play off an earlier spot in the Devlin/Bate match doing pins into bridges as the lads had done earlier. Martina tries to gross Katey out by shoving her face into her “gee” and later hitting her in the head with her arse repeatedly. There were many low blows thrown. To be blunt the match was a “work the vagina match” which I’m not sure is a good thing. Both Katey and Martina are more than capable of putting on a good match but there was parts here that were a bit too much and eye-rolly.

Martina went for Mr. Durexo and was cut off by a kick to the head by Damian Corvin who came out of nowhere. She was held by Bonesaw and Corvin while Katey cut off chunks of her hair. Shrieks of absolute horror came from the crowd. Justin Shape and Danny “The Beast” Butler came in to make the late save. Martina looked distraught with her hair loss. The crowd give her a great ovation, told her she’s still lovely and gave her some beer.

Damo comes out looking focused and intense to a warm reaction from the crowd. Luther comes out on the shoulders of Rocky Mac (who is wearing his sister’s GAA shorts – exclusive VOW scoop!). The crowd is slightly split much like last month, the majority being faithful Ward supporters and then more indie wrestling savvy fans who like to cheer for the outsiders cheering on Damo.

At the beginning of the match Damo is all over Luther throwing him around, standing on him etc. Ward makes a few short comebacks but Damo is firmly in control of the champion. Damo is very aggressive throughout and at one stage throws Luther into his fans. It all goes wrong when Damo attempts to go to the top rope and is caught by Luther for a big suplex from the top. Luther then attempts to chop down the giant but Damo makes an aggressive comeback. Damo is shocked and frustrated he can’t seem to put the champion away. He goes to the top once again and it fails him for a second time. Luther catches him with a hurricanrana and then gets the big man up for the Emerald Frosien. He had the win, but Foxy is pulled to outside by the returning Paul Tracey (an absolute disgrace of a man!).

Jordan Devlin jumps in the ring and lays out Damo and Ward out with a chair. Rocky Mac and Pa Ward run to the ring to make the save wielding Hurley and chairs to defend the laid out champion. Tracey and Jordan jumped out into the safety of the crowd and gets covered in beer by fans.

The Lord says Jordan walked into his gym 14 years ago (as a 13 year old), became the best technical wrestler in the world and should be top of the card. They are calling themselves “The Social Elite” and say they are going to take over OTT with more people looking to join the revolution. Ward gets to his feet and says he want to do it again with Big Damo and Damo says he’ll back. Throughout this whole angle Damo is gushing blood and required five staples to close the wound. This added a lot to the scene.

OTT returns to the Tivoli on the 6th of August for their first “Invasion Supershow” with special guests Zack Sabre Jr, Marty Scurll, War Machine, Will Ospreay, Tyler Bate, Charlie Garrett, Jigsaw and Travis Banks along with the core OTT roster. Hype for this show is big and it is likely to be OTTs first sell out with approx. 100 tickets remaining at time of writing. 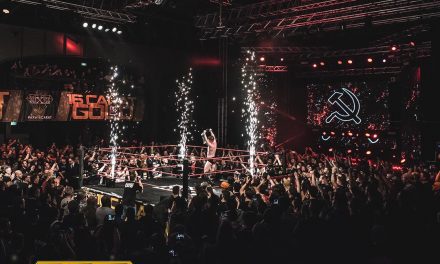 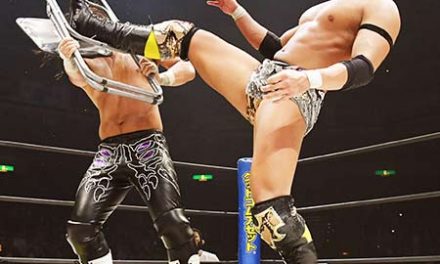