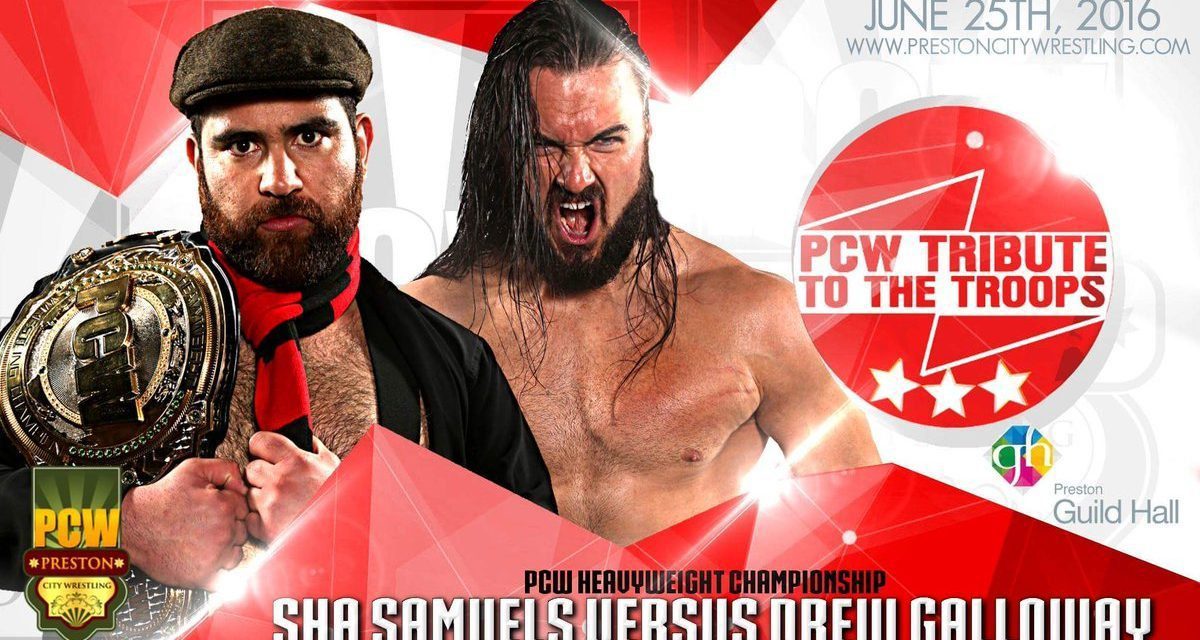 PCW Tribute to the Troops made history by being the first British wrestling show to air on live HD iPPV. Unfortunately, the end result was a disjointed, directionless and generally unenjoyable effort that failed to showcase the thriving British wrestling scene.

From the start here, the show was having problems with the ring announcer forgetting Martin Kirby’s moniker. This was a reasonably bright start to the show and all four worked hard although the match felt a little ‘by numbers’. The standout was Garrett whose offence was excellent throughout. The most notable moment in the match Garrett hitting a corkscrew senton which was quite a sight for a man of Garrett’s size. His excellent effort was foiled by Martin Kirby’s partner Joey Hayes who distracted him when he had Kirby beaten. This allowed Bubblegum to pick up the win with a shooting star press on Kirby. A steady if unspectacular opening to the show, unfortunately it would turn out to be one of the few highpoints. **

This segment came about approximately fifteen minutes into the show and it would be almost another half hour before there was any prolonged wrestling. Rees offered an open challenge to anyone in the back which was responded to b PCW co-owner, . He introduced Chris Masters who received a good reception from the crowd. Masters did not escape the Alpha Lock but instead chased Rees off. Why this couldn’t have just been a match here I have no clue.

After the match, we got one of the (many) low points of the evening as the ring announcer (on an iPPV) warned the crowd that the show would stop if children didn’t stop running to meet the wrestlers on the entrance way. Just baffling that this was a) said and b) broadcast.

Without a shadow of a doubt, this will be the worst thing I see in a wrestling ring this year. The entire fiasco ran about twenty-five minutes, twenty of which was filled with Gunn/Anderson schtick. I know Anderson has a certain cache and, when used well, it obviously makes sense to book these guys. However, the two times I have seen Anderson this year, firstly in OTT Wrestling (where he toe curlingly played out his schtick with planted fans/ring crew) and secondly here he has overstayed his welcome after five minutes. Gunn and Anderson managed to be both clearly disinterested here and yet unwilling to wrap it up. The match itself was an afterthought. What’s lower than DUD

This match started brightly as the story went that the two teams had been waiting to tear into each other and it immediately began as an intense brawl outside the ring. However, and inexplicably, these two teams that wanted to destroy each other decided to stop brawling and have a wrestling match. Nothing says blood feud like a wrist lock. The match went off a cliff in the ring as the two teams failed to connect and the match disintegrated into a complete mess exemplified by T-Bone slipping in a coast to coast attempt. This lead to one of my pet hates as they re-ran the whole spot again a minute later. Team Single retained their titles after T-Bone hit an awkward Dragon Suplex, which Rampage Brown finished up with a pile driver. *3/4

Those of you unfamiliar with British wrestling might be wondering who Jai McDowell is. Well, those of us who are familiar with it wouldn’t be able to help you because Jai is the winner of Britain’s Got Talent from five years ago (thanks Google!). So PCW decided that three decent wrestlers couldn’t do anything without some reality TV personality who precisely none of the crowd reacted to. The match ended when Hendry and McDowell threw Kirby and Hayes into each other. McDowell pinned Kirby. A complete and utter waste. Really, what’s lower than a DUD?

This was the  best match of the night which is rather faint praise but all three put in a really decent shift. Saraya dominated her two younger opponents with maniacal slaps, kicks and punches. Storm and Jacobs looked, in turns, genuinely overwhelmed by Knight but it really added something to the match. Storm did a great job in selling the fact that she was going to have to get into a fight with Knight or come off the worse. The production let the match done here in parts as the camera continued to follow Knight interacting with the crowd whilst Storm and Jacobs were wrestling which culminated in missing several moves. Despite these production issues, Knight masterfully guided some great storytelling in the match including getting Jacobs onside to hit Storm with a rung-hung DDT to the floor. Toni Storm picked up the win with a cradle bomb. ***1/2

Rob Van Dam remained undefeated in PCW picking up the win in this simple but well received match. This match also removed any doubts about the crowd not being mic-ed up properly. They were in full voice throughout here meaning there were swathes of this show where they weren’t making a sound. The broader story of this match was Lionheart’s seeming inability to put away US wrestlers. RVD ran his usual repertoire of moves, sealing his victory with the Five Star Frog Splash. I can take or leave Lionheart in general, but he contributed well in this outing. His offence was violent and believable and conveyed his general sense of frustration. This was perhaps the best booked match of the night, although it lacked the excitement of the women’s match. **1/2

Drew Galloway challenging for Sha Samuels’ PCW Championship was the show’s main event, with Galloway having earned his title shot earlier in the month in a ten man gauntlet. In the early stages Samuels’ faction, The Firm (The London Riots & Sammy Smooth) were removed from ringside by referee Joel Allen for interfering. We then got an announcement from Joanna Rose (Ring Announcer/Co-Owner) that she’d “just been informed” that the match was now a “No Disqualification”. Why the Firm wouldn’t just turn on their heel and get involved straight away was never explained.

Galloway and Samuels are both good performers and when they were given the space, they put on a good match here. Again, this match suffered from production problems as the pair brawling through the crowd was missed completely due to the venue having poor lighting and seemingly no on camera light to pick it up. Having seen these two countless times, I have no doubt they would have gone for each other hell for leather.

Galloway had the best sequence of wrestling across the entire show completing a butterfly suplex out of the tree of woe position, before Samuels would duck a Claymore Kick attempt, only to leave himself wide open for piledriver from Galloway for a strong near fall.

In the closing stages, The Firm came back out and Samuels caught Galloway with a low blow. Galloway fought back taking out The London Riots and Sammy Smooth. In the closing stages, Galloway and Samuels escaped each other’s finishers and again without interference Samuels and Galloway got the crowd invested. The finish came rather abruptly when Samuels again applied his sleeper hold and Galloway passed out. This would have been a so-so finish to an awful show.

It was clear at this stage that the crowd was emptying out and Galloway got on the mic encouraging people to stay. What came next can only be described as an unholy clusterfuck. The Firm, the Hooligans, Team Single all brawled around the ring. Steven Fludder (PCW Owner) then told the crowd that he wasn’t prepared to end the show on a “screwjob finish” (it wasn’t). Again, it was really clear on camera that a lot of the crowd were gone at this point. Fludder said the match would continue with the inclusion of Noam Dar, who had wrestled in the CWC in Orlando the day before. Thirty seconds later, Dar applied the Champagne Super Kneebar to win the PCW title.

I have seen worse shows than this but not many and none this year. The major fault lies with how the matches were booked and the general production. With the exception of Gunn and Anderson, everyone worked hard. From a narrative point of view, too many of how the matches developed was illogical- none more so than the main event.

The online response to this event has been generally negative; the views being expressed are that the show poorly represented the thriving British wrestling scene and badly underutilised the talent available. Both are fair criticisms. Fans have a loyalty to these wrestlers and seeing them presented as they were here clearly struck a nerve. I watch more British wrestling than any other region and at least seven promotions have presented shows far better than this one this year with only a fraction of the hype. On a positive note, the women’s match and portions of the main event swam against the tide in producing some good wrestling. 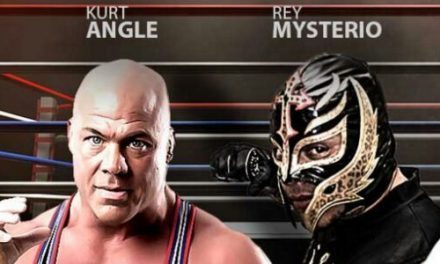