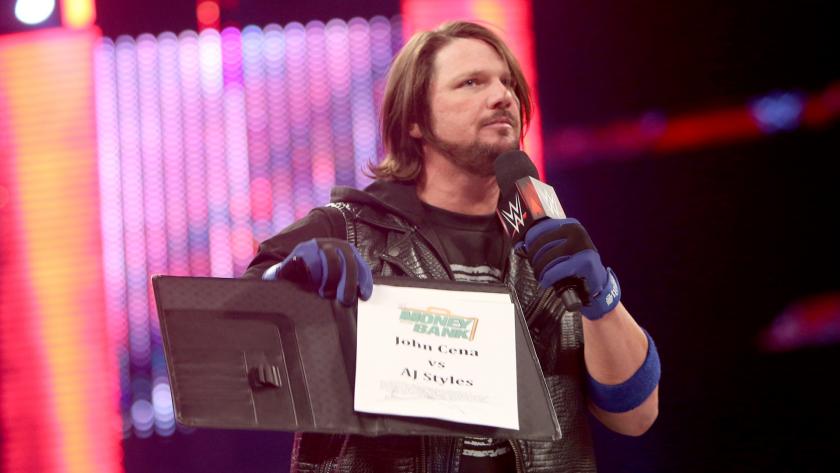 3 Things You Must Watch if You DVR

Kofi’s wearing Steph Curry’s new sneakers, causing sneering and derision until Curry looks at the ratings and says “scoreboard.” Enzo and Cass come out to make Francesca II jokes, claiming Enzo took the trombone for a night on the town. I’m ashamed none of the writers nor Xavier pulled the obvious “Trombonists can do it in seven positions” joke. Yes, I’m a band geek. The Vaudevillains interrupt a potential battle of wits to sing. It does nothing to convince me that they’re threats to the titles. I think the Club is coming out to add some badass credibility only to have them make a Camp WWE reference and cheap digs at the Saints.

Long house show style match with the first segment being New Day shine, heat on Enzo into Big Cass hot tag and Kofi pulling out an ode to AR Fox’s somersault dive over the corner turnbuckle before the break. The second segment was the usual multi-person match breaks down into bedlam, the Club catch Kofi in a Magic Killer for the win.

Personally I wish the Club had come out and just been serious to counteract the other three teams, but given the results of the match, I think Enzo and Cass are getting the titles.

Rusev jumped Titus O’Neil before a match, no sign of Jack Swagger.

Remember when the Shield was the hottest act in wrestling? The vignettes certainly make me remember. But that’s the past and we’re having a segment with the most over babyface on the roster, and Roman Reigns. Prop Comic Dean Ambrose hosts. They bait and switch the three reminiscing about good times until the Rollins mention of the chairshot being a favorite memory. Someone should have nixed the whole “we found Dean passed out by a dumpster” line given the events of the past week in my opinion, especially when you advertise that potential writers should follow current events and pop culture. This would be have been better had it not been for Dean Ambrose being a de facto comedy act since the break up, Seth Rollins telling the truth and the fact that even with the misfires of both of those two characters, people liked them both better than Reigns once the road map for his ascent was obvious and probably still do. We’re living in a weird post-modern world where fans don’t turn on their favorites after watching them lose because they hope there’s a good program with them coming once the company realizes what they have. They’re still building Rollins as “cheating” even though Money in the Bank is perfectly legal, and Reigns having “earned” it all. The crowd doesn’t buy it, but that’s the story.

The post interview fight is interesting in that they tease Ambrose’s “wild card” tendencies in that if he wins the Money in the Bank briefcase, he could cash against either of them. It’s another trope they’ve done with Ambrose one too many times to be effective, but after Reigns hits Rollins with a Superman Punch, Ambrose hits a Dirty Deeds on Reigns. Then during a backstage segment with Stephanie immediately babyfaced him back. I figure the attack on Reigns will again be retconned within two weeks as Ambrose gets sacrificed to Reigns’ next opponent, whomever that is.

Becky and Nattie attempted cat puns, Dana threw Charlotte back in the ring to help but Paige quickly hit a Ram-Paige. Charlotte browbeats Dana backstage after the match and calmly says they have work to do. Too soon to blow this off, so I tend to think it’s just a bait and switch, but they like Dana so maybe they fast track the turn. The tag match result isn’t consequential to the title, so perhaps Dana costs them the match and it’s a four way for the title in July? Sasha’s running in circles on Superstars, so I tend to think “Dana’s Choice” is put off until after that program.

Apollo Crews punched Sheamus on the Pre Show, Zach Ryder got caught talking about it to people backstage and must die. Sheamus continues killing Ryder after the match allowing Apollo to make the save. In addition to this, but unmentioned, we’re getting Dolph Ziggler vs. Baron Corbin again. Funny how one concussion put three acts on a similar trajectory to the back of Vince McMahon’s mind.

Was I the only one who found it funny that they edited Ryback and CM Punk out of flashbacks but not Kane beating Rey Misterio. The Lucha Dragons just aren’t the same.

Fun short match, Zayn as underdog built up with a win with a sunset flip turned pseduo-Canadian Destroyer. Two absolute pros who shine in almost any situation.

Michael Cole is presiding over the signing of a contract for a match “15 years in the making.” Okay, maybe not as he leaves rather quickly. In a very old school move, John Cena builds up AJ Styles, namedropping PWG, ROH and New Japan (but not TNA). He then gives Shane credit from bringing Styles into the WWE when management would never give him a chance “for whatever reason” (Me: “Short? Southern? Indyriffic?”). Interesting turn as Cena has two contracts, a one on one match with Styles, or a one on one match that allows the Club at ringside. Styles claims if he had been in WWE the whole time, Cena wouldn’t be nearly as successful which raises Cena’s ire. Cena channeling someone by saying he was like “every other indy guy whining.” It’s nothing new out of this segment but the intensity is nice to see with two guys who can bring it. This was AJ Styles’ best mic work since entering the company, and it looks like they’re working closer with him to get his cadence down.

Kevin Owens stooged that Alberto Del Rio was late to the show. Del Rio accuses Owens of getting him detained by airport security. Corporate Kane, the running Smackdown joke for the week, suggests a team team match to build teamwork. So they’ll fight the Lucha Dragons and if the Dragons win, they’re in Money in the Bank. Sin Cara’s probably injured just thinking about it. Owens and Del Rio bicker and have miscommunication to tease a change in the match throughout until reality sets in that this would never happen. A Pop Up Powerbomb on Sin Cara gets the pin and Del Rio attacks Owens post-match and points to the briefcase.

If you’ve been paying attention, Kevin Owens hasn’t had a winning moment throughout this build, so he’s probably winning.

They literally plugged this as “for the first time on RAW” after we just got done with a program. I don’t mind the occasional “treat me like I’m stupid” but when combined with cynical marketing Sami Zayn and Kevin Owens are guest commentators, Cesaro is guest ring announcer, Alberto Del Rio gets to ring the bell. I’m betting all six end up fighting to close the show. Shockingly we’re getting a six man tag for Smackdown.

The best part of the match was the finish, which was creative. Ambrose blocks a Code Breaker then hits a Dirty Deeds for the pin. Then all six participants start fighting.

I’m a person who thinks the builds for Money in the Bank are among the worst in the company, because we never get anticipation of all six coming together. They’re all always on top of one another as opposed to building six separate believable #1 contenders. By the time the match comes around, I’m so fatigued I tend to enjoy the match less. Couple that with not being two months out of a WrestleMania ladder match involving some of these participants, and this doesn’t seem like a big deal. One guy will get a briefcase and everyone else will move on to a another dance partner. Michael Cole and JBL both made this meta by talking about this was going to break down.

The John Cena vs AJ Styles build has been great to the point where it overshadows the WWE Title Match and the Money in the Bank match. It’s possible it holds the most intrigue as well from a future plans perspective.

Be sure to listen to the preview on Shake Them Ropes and join us with your thoughts live after the show. Follow @ShakeThemRopes on Twitter. I’m @Crapgame13 for all of your complaints.