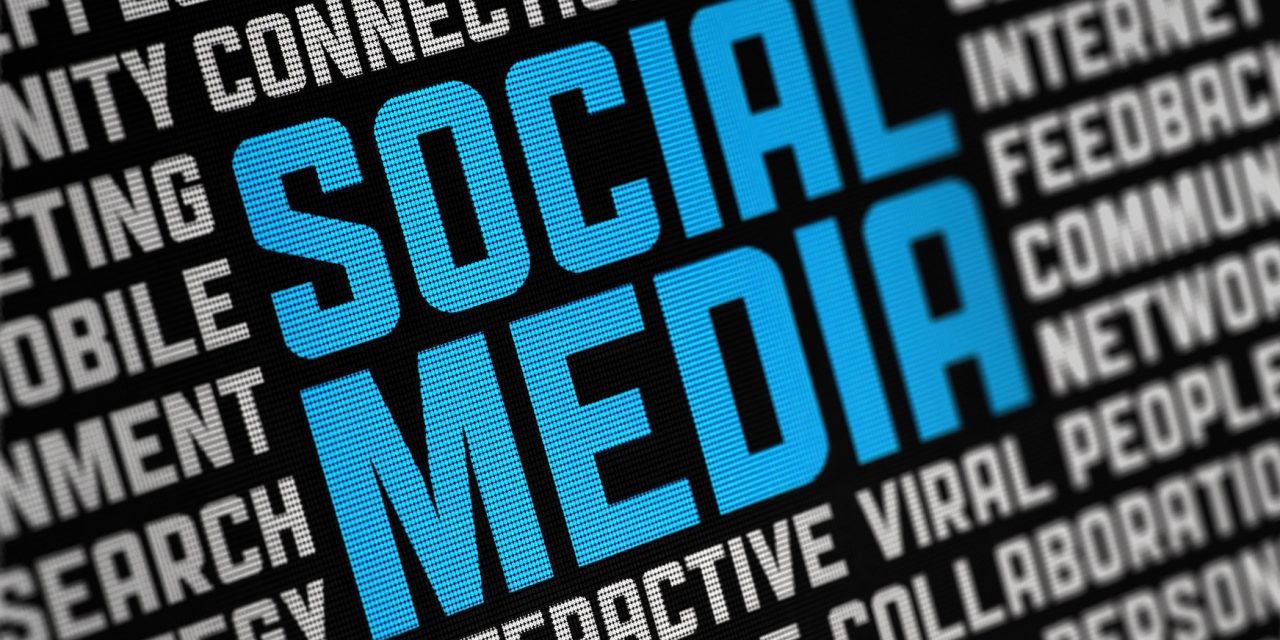 “If you look over the last hundred years of media, the money has followed the eyeballs. But it takes time. It takes the money longer than the behavior. The behavior changes and the money at first stays where the old behavior was, and then there’s a tipping point.” – George Barrios at Needham Conference (5/19/2016)

The future value of social media followers seems deeply both optimistic and uncertain.

Focusing on the total number of followers an account has might tell us as much about how old the account is, as it tells us about how popular it is.

WWE claims to have over 600 million social media followers. When they sum that number, they are including every single one of their accounts, including their talents’ accounts, across every platform. Here I will be considering the flagship accounts, only, of each promotion on Facebook, Twitter, YouTube and Instagram. I did a similar analysis six months ago.

Counting up social media followers about every six months for the last year, at least one thing we actually can look at in a sensible context is growth from one period to another. This gives us one period of time that is equal in length for all promotions. 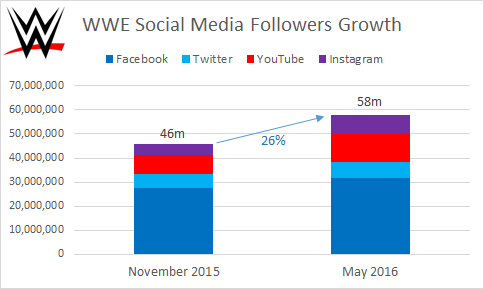 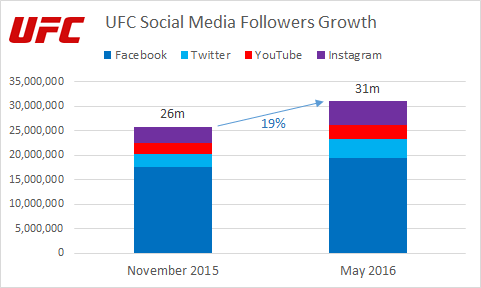 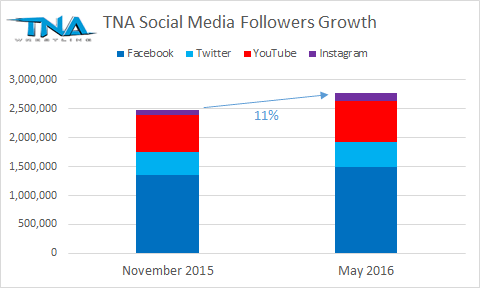 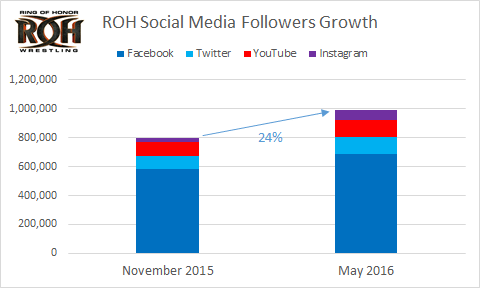 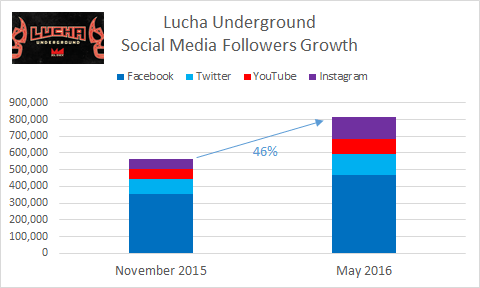 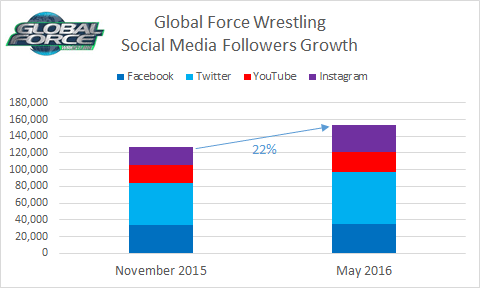 WWE grew 26%, but it’s important to look at this in context of other similar companies, such as UFC. Even so, 26% is higher than 19% for UFC, which has about half the social media footprint of WWE. Of course, this is despite UFC apparently being worth far more than WWE, as a company, in light of recent news about the potential sale of the MMA promotion. I suspect there’s something about pro wrestling, as opposed to MMA, that makes it more conducive to social media: whether it’s predictions and arguments about creative decisions or the fact that the programming is weekly, or both, or something else.

As for the smaller major promotions, TNA’s social media growth seems to have slowed, perhaps due to dwindling resources and less money to spend on ads to gain followers. As of this writing, Ring of Honor has surpassed one million total followers across the four platforms. Lucha Underground, much younger than TNA or ROH, is still growing its presence rapidly, and is already closing in on the fourteen-year-old ROH. Meanwhile Global Force Wrestling, which was founded at about the same time as Lucha Underground, and hasn’t made a TV deal, had only half the growth of the El Rey program.

Among what you might call the “small major” promotions (TNA, ROH, Lucha Underground and GFW), WWE’s NXT brand surpasses them all, combined. That’s even totally omitting a YouTube channel, since NXT doesn’t have a dedicated YouTube channel; its videos merely appear on the main WWE YouTube channel. So just on Facebook, Twitter and Instagram followers, NXT has more followers than all the other four combined, even counting those promotions’ YouTube followers. 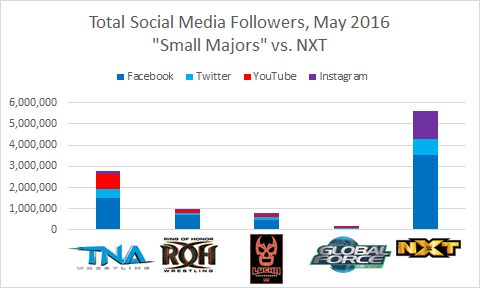 I believe YouTube followers (“subscribers”) is the metric here with the most integrity. That’s because YouTube is the only platform among the four being looked here that doesn’t offer its users advertising to try to drum up followers or impressions.

Here’s how the small majors stand for YouTube subscribers: 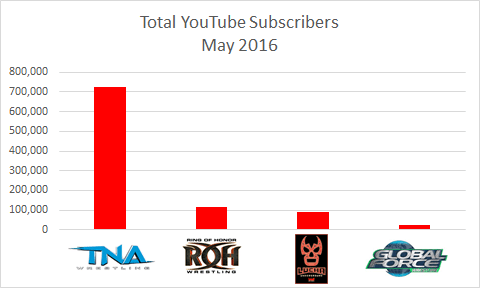 Do these stats give us an idea of which promotions are most popular or most visible? When it comes to WWE and the “small major” promotions, we can take social media followers into account, but look beyond those stats to get a better idea.

We know thanks to other metrics like television viewership and attendance that WWE is by far the number-one promotion, besides the fact that its social media followers (58 million) dwarf all the others combined (4.7 million).

Since Ring of Honor has television exposure throughout a large part of the U.S., and because it has at least some paid live attendance to speak of, they are the distant number-two.

Even though TNA nearly triples the rest for social media followers, they are the number-three promotion in the country. The company hasn’t run a house show in years; its sole live events are TV tapings, often with free admission. But we can say that because of its TV viewership, it’s ahead of Lucha Underground, which also doesn’t tour.

Meanwhile GFW is in last place. The promotion runs sporadic live events, but has no TV deal, and at this rate, may never get one. Its total follower count, however, (153,832) is still 50,000 higher than even the independent promotion with the highest total count, Pro Wrestling Guerilla. That’s a fact that warrants keeping GFW in the “small major” category, for now.