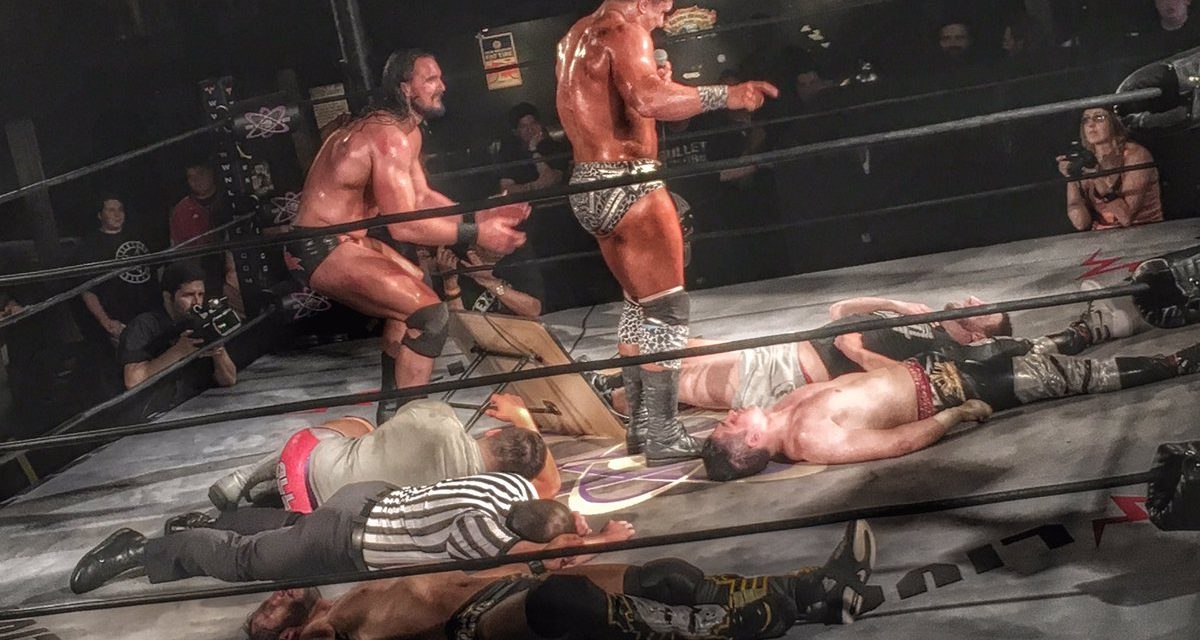 EVOLVE rolled into Ybor City, Florida for the 62nd show in company history. The event was set to be headlined by perhaps the strangest match in all of 2016, Drew Galloway & Ethan Carter III vs. TJP & Johnny Gargano in a bout centered around the honor of the WWE. Chris Hero, on a three match winning streak, got his second shot at EVOLVE Champion Timothy Thatcher. Catch Point took on the Bravado Brothers on the second stop of their tour of duty as EVOLVE Tag Team Champions. Spoiler alert: all of these matches performed up to par as did the rest of the card, read on for specifics.

On commentary, Lenny Leonard pointed out that in Fred Yehi’s first few months with the company he faced the likes of Chris Hero, Drew Gulak, and Marty Scurll—not exactly dip you toes in the water kind of introduction. So Yehi was due for a win. Anthony Nese entered the match on a losing streak of his own. Something had to give for one of them.

From the opening exchange of Yehi’s stomps vs. Nese’s kicks, it was apparent that the winner of the opening bout would be the first man to find an opening, which proved to be rare to find. Not that there wasn’t a lack of trying, but each fighter was determined to keep the flow rapid as to give their foe as little time to think as possible. Every big move in either man’s usual set was countered in an ingenious manner or strong-armed out of at two. Only when Nese ascended to the top rope for his 450 splash did Yehi have a millisecond to ponder, and as Nese rotated high above him, Yehi moved just enough to ensure that Nese missed. Yehi promptly locked in a koji clutch. Exhausted and with precious few options, Nese tapped out so that he could fight another day.

There is a definite “wow’ factor associated with this match. The pace and the attention to detail—such as Yehi’s frequent stomps as he landed from jumping to dodge a kick from Nese—serve as a counter to the equally as awesome athletic spectacle of say Will Ospreay vs. Ricochet. Fred Yehi continues to impress, and this was the appropriate spot for him to get a win in EVOLVE. Nese came out clearly motivated to perform well and when that is the case he is a marvel in the ring. ****

Cloaked in the pain of defeat, Nese calmly asked Johanna Rose for her microphone. He proceeded to tell a story about himself; about how when he founded the Premiere Athlete Brand he wanted to surround himself with the best competitors. His creation ended up becoming two grown men acting like children. Nese said he was frustrated with the direction of his career and that only one thing could change its trajectory—a shot to compete in the WWE Cruiserweight Classic.

Darby Allin didn’t have a prayer against Ethan Page in Dallas, and it appeared he needed more than three Hail Marys to pull the upset in Ybor City. The size difference between the two would be apparent to a man standing fifty feet away. Page had motivation too; he wanted to pick up the win to build momentum towards his rematch with Drew Galloway. Those two facts didn’t mean a damn thing to Allin. He came to shock EVOLVE, well until Page threw him face first into a post from the ring. Allin labored to find his bearings at ringside. Somehow he beat the count with five seconds to spare. Page told him to quit. Allin responded with a weak chop to the chest, which Page returned in kind. Fighting spirit abducted the two, and a hard-hitting wrestling match ensued. Allin poured his heart into his battle art. Heck, he almost got Page on two occasions. But then there was the piledriver, the same one that ended Allin in Dallas. Despite his heart and skill, he had no counter for the piledriver, thus, history repeated itself.

Allin is a carbon copy of Shannon Moore when he was riding the subway in WWECW in the looks department. He can work though and has a creative offense—a springboard headbutt and a tilt-a-whirl small package. The underdog gimmick suits him, and I hope that he sticks around in EVOLVE because this match made him. ***

Cedric Alexander rode into Ybor City as the new gunslinger in town to challenge the red-hot rookie, Matt Riddle. Alexander didn’t resort to any fancy trick shooting. He stayed with his tried and true quick trigger, hard hitting offense. It kept Riddle on his toes, literally. Riddle answered with suplexes and strikes that were equal parts beautiful and sickening. Alexander came close to winning his first shootout with his trusty Lumbar Check, but Riddle landed halfway across the ring and an exhausted Alexander had to waste precious seconds crawling over to cover him. Riddle didn’t take any chances and ended the fight with a fisherman buster floated over into a neck submission that I’ve never seen before.

When I watched this match, it reminded me of an excellent main event on ROH television. Which comes as no surprise considering that is where Alexander wrestled for the last few years. These kinds of matches are meant to be entertaining and crammed with as much action as possible within a constrained amount of time; a very smart move to ease Alexander into EVOLVE and for Riddle’s overall wrestling education. ***1/2

In my preview for EVOLVE 62 and 63, I expressed hope that the recent heel turn by the Bravados would not lead to them backtracking to their excruciatingly bad act from their first EVOLVE run. At least for one night, riders on the Bravado Bandwagon could breathe a sigh of relief. Harlem and Lancelot worked as subtle heels; noticeably mocking the famous Catch Point handshake before the match. Such an approach makes them the heels the division needs without descending into laughably bad material.

The opening portion of the match ran a little long in the tooth. The work was all right but watching the champions and challengers take turns playing divide and conquer wasn’t exactly compelling. Business picked when the Bravados took Gulak out of the match with their doomsday tope, and they started to put Tracy Williams through the ringer: a Gentlemen’s Agreement, some other nasty double team moves and a half crab that almost ended Catch Point’s reign. Hot Sauce rallied, and with some help from Gulak, clinched another successful title defense with an avalanche DDT.

Tracy Williams work this year as Catch Point’s resident fiery, underdog has yielded some great matches. His comeback injected some much-needed juice into the match as it entered the home stretch. It’s a shame that EVOLVE doesn’t have a secondary championship because Williams would be perfect for it at this point in his career. ***¼

Gulak fetched a microphone after the match and proceeded to rundown Timothy Thatcher, which brought out the EVOLVE Champion. Thatcher kindly reminded Catch Point that while he would deal with them that tonight he had a defense against Chris Hero, who then came down to the ring and shared Thatcher’s sentiments.

After a series of real clunkers, Timothy Thatcher managed to put in his first quality title defense of 2016 against, surprise, surprise, Chris Hero. Which isn’t a surprise considering the two excellent matches the two had against one another in EVOLVE last year. Now the third installment of the trilogy didn’t equal the quality of its predecessors, but this was still a superb title fight.

The formula was simple: Thatcher tried to bring down Hero with limb work, and Hero did his best to knock Thatcher’s block off; it was a beautiful thing to watch. Thatcher tried to get cute and mimic Hero’s idea. It wasn’t Timmy best idea considering Hero almost knocked him out of his boots. What was a good idea of Thatcher’s was wrestling version of the famed “rope-a-dope” strategy. Whenever Hero gave him an elbow, Thatch stayed on his feet to frustrate the larger challenger. Hero came back with harder blows, but they wore him out. While it may not have been the best strategy in the long term, it effectively wore down Hero enough for Thatcher to submit him with a cross armbreaker. ***¾

Catch Point came back out after the match to verbally taunt Thatcher. The segment was nothing out of this world but the always entertaining Matt Riddle came out to talk trash, which was fun.

I don’t know if Gabe Sapolsky has a deal with businesses surrounding the Orpheum or not but it seems as if every so often a street fight becomes its namesake. The tradition continued in grand fashion. EC3 and Gargano brawled in the back of a bicycle rickshaw, and yes it was as glorious as it sounds. Galloway played the part of the urban colossus and threw his opponents into multiple store fronts.

When the action spilled back inside the weapons came out as did the near falls. Neither team could grab the advantage. Not until Chris Hero inserted himself into the match and laid out TJP/Gargano with his filthy short piledriver. A One-Percenter later and the bad guys scored the “W”.

The main event was designed to be fun and nothing more. The action was crazy and at times creative. EC3 was perfect as a bully here by intimidating the officials and planting a fist in their face when they wouldn’t comply with his demands. I’m also intrigued to see where the insertion of Chris Hero into the feud goes. ***1/2

EVOLVE 62 was a clean, fun wrestling show that showcased the signature variety that the company is known for. The title match and main event lived up to the hype but don’t overlook the Alexander/Riddle bout or the fantastic opener either, which was the match of the night in my book. Solid thumbs up yet again for Sapolsky’s outfit. 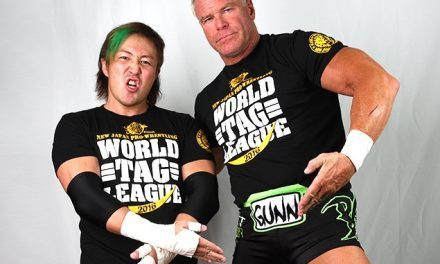 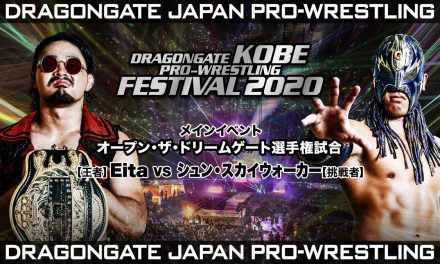 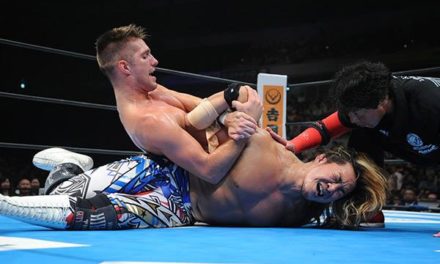