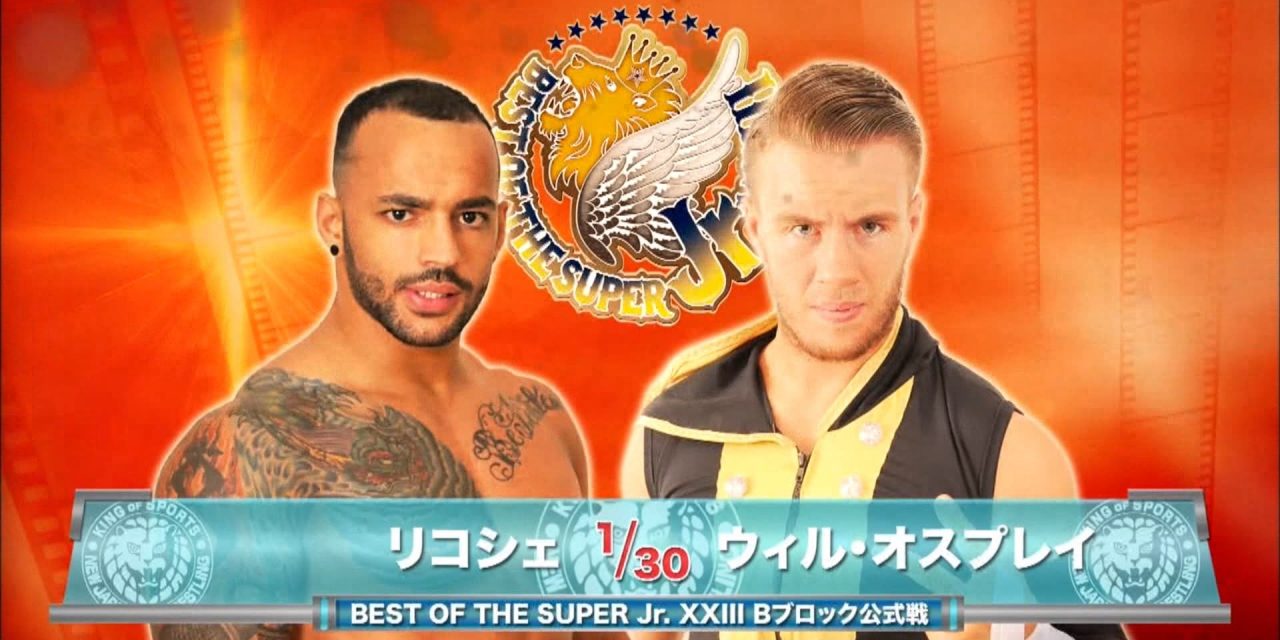 What happens when a human highlight reel meets an aerial assassin? Last Friday, the world found out when Ricochet and Will Ospreay stepped into the ring at Korakuen Hall; one of the more anticipated matches of this year’s NJPW Best of the Super Juniors tournament. The audience was primed for something special before the reverberation of the opening bell could even dissipate; a sentiment made into reality in the 20 minutes that followed.

As word of the visually stunning encounter quickly spread across social media platforms a familiar but important debate began to take shape; is the high-flying style a step too far in terms of viable suspension of disbelief? This particular version of the debate was made all the more polarizing thanks to a tweet from Vader – he was not a fan.

Blantant acrobatics,no story,is there anything done in this video that relates to winning u could get 2 high school gymnast and put ona show

The Mastodon’s critique triggered a chain reaction of opposing tweets from the likes of The Young Bucks, Joey Ryan, William Regal and even Ricochet himself.

Outwardly the contentious debate between the old guard and the new appears to be cut and dry; the flashy style either enhances your overall enjoyment of the product or detracts from it. You either view acrobatic chain wrestling as the natural evolution of the medium or a dangerous trend that could compromise the integrity of the business if left unchecked. But nothing in life is as cut and dry as it may seem, least of all art.

Leonardo da Vinci’s, La Gioconda is the most famous painting in the world; you may know it better as The Mona Lisa. It’s an objectively beautiful portrait; a fact based on tangible elements like brush technique and physical composition. Technically pleasing though it may be, the painting’s worth (nearly $800 million) derives from 500 years of subjective interpretation. To some the work represents a fundamental contemporary by one of history’s greatest artists. Others hail it as an enigmatic bohemian with subtle messages and secret meaning. Neither stance is right. Neither stance is wrong. The beauty of art is its ability to elicit a wide range of emotions among a diverse audience.

Like The Mona Lisa, a pro wrestling match has objective splendor; impressive feats of strength and athleticism choreographed to feel spontaneous. A pro wrestler’s application of his craft is objectively impressive, just as it would be to watch any master craftsman practice his craft, whether the craft is of particular interest to you or not. The unique elements of pro wrestling also make it one of the most subjective art forms on the planet. Though it’s designed to take place among the masses pro wrestling is a deeply personal art form. It speaks to everyone differently based on a number of variables like geography, socioeconomic status, age, race and a litany of intangibles that make up an individual’s internal psychology.

At its core pro wrestling is the art of storytelling and so it must be judged according to the laws that govern storytelling. Stories with fundamentally sound structure, focused themes and compelling characters have objective value that goes beyond personal preference. For example, Ayn Rand’s epic novel, Atlas Shrugged meets all the objective criteria a strong story must possess. An individual with liberal views may find it difficult to connect with the story, but the fact remains, Atlas Shrugged is an objectively good story. The same logic applies to pro wrestling’s version of storytelling.

The objective merits of the story between Ricochet and Ospreay must be explored on multiple fronts. The match itself was but a single chapter within a greater narrative, an annual tournament of the best junior heavyweights New Japan has to offer. Ricochet, a former BOSJ winner, entered the match two points out of first place in his block; a win was necessary to make up ground on his competition, or at the very least to prevent from losing any further ground. On the flip side,Ospreay entered the match having lost each of his first two matches of the tournament. A third consecutive loss would have all but ended his hopes of earning the top spot within his block. That was the backdrop for the two to engage in compelling competition for something of perceived value.

So far so good.

Layered within that larger narrative was another compelling dynamic, the drama of two infamous high fliers doing battle on the grandest stage available for men of their ilk; the established standard bearer (Ricochet) and the hungry young challenger eager to prove that he’s better (Ospreay). This concept was brilliantly captured in the opening sequences of the match, neither man capable of gaining an advantage as they soared through the air in a jaw-dropping détente. The next phase of the match found Ricochet with the upper hand thanks to his veteran poise and expertise, though he was unable to put his challenger away for good. Finally, Ospreay made his comeback, like the fiery babyface that he is, connected with a Springboard Stunner and stood victorious.

That’s a story that can easily be categorized as Pro Wrestling 101. More plainly put, the match was objectively great.

There is another aspect, however, that deserves some level of consideration; one that directly speaks to Vader’s vociferous public criticism of the match. Pro wrestling is performance art, the medium’s stories are told through the actions of trained performers within a semi-controlled environment. As such, an individual performance has the ability to enhance or hinder one’s ability to absorb the story being told. Variables like skill level or the philosophical approach taken by a particular performer can certainly influence the audience’s ability to suspend disbelief and become emotionally invested in the story being told. Needless to say, the performance aspect of pro wrestling is highly subjective.

Subjective art exists solely in the mind of the individual. The emotions (or lack thereof) brought about by subjective art provide invaluable insight into one’s mind; it tells a story about the individual more so than anything else. Vader’s view on the match, specifically his inability to suspend disbelief, is not all that difficult to understand; a man raised on the mean streets of Compton, California, who was often forced to fight as a means to protect himself clearly has a strong grasp of what a real fight likes like. That is a core truth of Vader’s reality; no amount stiff chops or European uppercuts mixed into the match could suffice that truth. Contrarily, an individual who places an increased importance on larger than life action or pure athletic display will come away more than satisfied after a match like that. Neither side is right and neither side is wrong.

Beauty truly is in the eye of the beholder and so is pro wrestling.