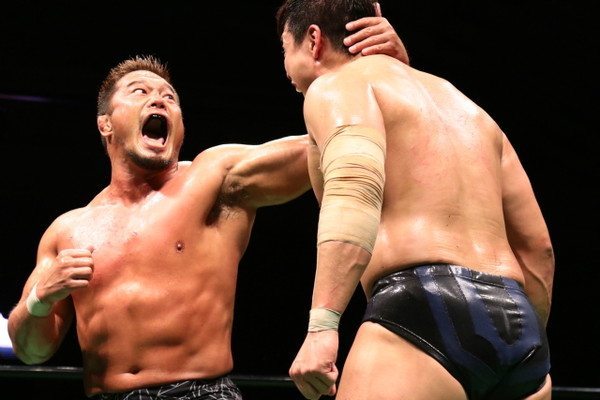 For those unfamiliar, Shiro Tomoyose is a 24-year-old NOAH/SEM rookie. He made his debut around this time last year and has worked no more than 60 matches since, yet has shown some great improvement. He’s by no means a polished worker, but there’s a little something there, a little bit of potential. I don’t see him being a rookie for very long, but you can never tell with NOAH. Just look at Hitoshi Kumano, who’s been there for years and is just now moving up. Decent little opener with a nice structure that kept it from being the usual Akitoshi Saito/Quiet Storm snoozefest. Tomoyose had the most to do and did an exceptional job. Team veteran very obviously got the win. **

I’m not sure why El Desperado is where he is. They had their chance to turn him babyface two months ago when he kept losing matches and had tension with the other Suzuki-gun juniors, but they dropped that and now he’s back to where he was before. He does nothing in these matches, he does nothing in any match, and until they do turn him, he’s not going to do anything. He’s just a guy, which is a shame, as he’s a very good wrestler when motivated. Ishimori, to everyone’s surprise, was the highlight of the match, despite only being in the ring for about a minute. As you would expect, Genba took the fall. *1/4

Kitamiya and Nakajima were made for one another and I’m surprised it took NOAH this long to put them together, both being students of Kensuke Sasaki and Masa Saito. Kitamiya’s new persona is essentially a tribute to the two, as you could tell by the name change, the new gear and the signature Sasaki mullet. I’m not sure it says much of anything about what NOAH does with him moving forward, but it’s certainly a nice move. The match was fine, too short to be anything more. Suzuki and Nakajima had some nice interactions, Kitamiya looked good, Iizuka was Iizuka, and that’s all there really was to this. Kitamiya got whacked with a chair from behind, which allowed Suzuki to put him away with a Gotch-Style piledriver. **3/4

This was another one of those Shelton Benjamin matches that caught people off guard by how great not only the match was, but how great his individual performance was. Benjamin is as consistent a worker as you’ll find but only has a handful of big singles matches a year that we can point to and say “yeah, look how great this guy is.” This is something I’ve said about Gedo for the longest time as well, which is a discussion that’s recently popped back because of his performance throughout this year’s Best of the Super Juniors.

Taniguchi, on the other hand, has been a lot more tolerable since dropping the whole Maybach persona but is still a dull worker until put in the ring with someone he can have a good match with, like a Shelton Benjamin. He’s not a guy you’re going to see work a good match with an inferior opponent.

This was grumpy, pissed off, and most importantly, motivated Shelton Benjamin at his best. This was 2014 G1 Shelton Benjamin. This was his match through and through, though Taniguchi did his thing and was completely fine. My only complaint is that they had Benjamin put Taniguchi through a table and win via count-out. Taniguchi kicked out of his move so it made sense for him to win underhandedly, but being that he’s next in line for a title shot, I thought a definitive win would have been better. Aside from that, they did a great job establishing him. ****

Kotoge and Harada have a very strong case for Tag Team of the Year after this series of matches. They had a case before, but Kenoh and Ohara brought the very best out of them and elevated them to that next level. These are some of the best juniors on the planet and with the Super J Cup right around the corner, hopefully more people get to see that, assuming at least two of them make the tournament. The problem I had with TAKA and Taichi’s reign is that their matches became too samey and uninspiring, which is exactly what these matches haven’t been. Like every other match these two teams have had, this was an absolute sprint.

Kotoge and Harada were confronted by Taichi and TAKA Michinoku afterwards, as well as Gedo and Jado. Yes, Gedo and Jado. A three-way tag match was set for the next big Korakuen show on June 12th. Where Kenoh and Ohara go from here, I’m not sure, but I’ve enjoyed them as key players in the junior division so hopefully they rebound from this loss and don’t get sucked back into the undercard. ****1/4

After spending nearly four years as a nobody on the undercard of every NOAH show, Kumano has finally moved up in the ranks. I personally have never seen much in him. He’s had his moments where I thought he was good, never great.  I’ve never truly been impressed by him…until now. This was the biggest, most important match of his young life, and he did not disappoint. The fire and the passion he showed from start to finish was awe-inspiring, you really got the sense that this match meant the world to him, which I love when watching young wrestlers in big spots, especially against older guys who have had clear influence on them.

Kanemaru’s run as champion has gotten rather long in the tooth and it’s about time for him to drop the title, and unless they decide to turn El Desperado like they should have two months ago, which I doubt they do, I think Kenoh is really the only way to go. Kotoge and Harada are busy with the junior tag titles, it’s too soon for another Kanemaru/Ishimori match, Ohara just had his shot. Kenoh may be their guy. Nevertheless, Kanemaru clearly wasn’t losing here, but Kumano did a great job of sucking you in and having you at the edge of your seat thinking he’d get the upset, so hats of to him, and hats off to Kanemaru for playing his grumpy vet role so well. Very good match. ***1/2

KES has gone through every team NOAH has thrown at them over the course of nearly 500 days, from TMDK, to the Dangan Yankees, to Katsuhiko Nakajima and Mohammed Yone, to Go Shiozaki and Maybach Taniguchi. They were one of the strongest booked tag teams on the planet throughout 2015 and the early part of 2016. They’re also one of the more consistent, yet underappreciated tag teams out there, and have been for the longest time now.

Yano wasn’t featured as much as I feared he would be here. His shtick works in New Japan multi-mans but will never work in the big spot, so him and Davey doing their thing off to side while Marufuji and Archer were the center of attention was for the better. It took two Shiranuis and two Ko-ohs, but Marufuji did what no one else has been able to do in over a year, as he put an end to KES’ reign. The rematch takes place on June 12th in Korakuen. Another very good match. ***3/4

Go Shiozaki’s journey to the top began in November when he hopped back over to NOAH after spending a few years in All Japan. He found himself slotted with the rest of the undercard, as he quickly realized he wasn’t just going to waltz into the company and have everything handed to him. He made his intentions clear, yet knew he’d have to earn what he was looking achieve, which was not only the GHC Championship, but the trust and the respect of both his peers and the NOAH faithful. While he was caught up in that, the quiet guy who’s had his time to shine already and has been sitting quietly in the shadows since, decided that he was tired of keeping his mouth shut and that it was time for a change. If you can’t beat them, join them, they say, and that’s exactly what Takashi Sugiura did. Sugiura turned on NOAH and joined Suzuki-gun in the wake of Marufuji’s big win over Suzuki in December, then stripped Marufuji of his pride by taking the title he fought so hard to achieve away from him in January. Marufuji then, desperately and damn near hopelessly, turned to Shiozaki and gave him his blessing.

Shiozaki’s journey continued, he watched as his friend Nakajima fell to Sugiura along the way while he himself fell to KES, but nevertheless, he made it to the top.

This was an absolute war in every sense of the word. The hate these two showed towards each other was so vile, I was legitimately getting uncomfortable at one point. Shiozaki chopped away at Sugiura’s chest all match, despite it only taking him two minutes to break the skin and cause him to bleed profusely. It was quite gross, yet insanely awesome. The Suzuki-gun interference didn’t bother me as much as it normally would since it only lasted about 15 seconds and fit the story of the match perfectly with Sugiura having to use all these underhanded tactics to weaken Shiozaki, who was clearly his superior. Sugiura did everything he could, but in the end, Shiozaki’s heart and Shiozaki’s pride was too much for him to overcome, as Shiozaki finally achieved everything he’s been looking to achieve for seven months. Shelton Benjamin had a word or two for him afterwards, and as I alluded to previously, Benjamin’s next in line in for a title shot. The match is set for June 12th.

This was right up there with Sugiura vs. Nakajima as one of the best NOAH matches of the year. A phenomenal match between two great wrestlers at their very best. ****1/2

From top to bottom, this was a very, very good show. One of those shows you watch and scratch your head at, as NOAH is so actively dull in between major shows. Watch the top five matches here, they’re all worth your time.