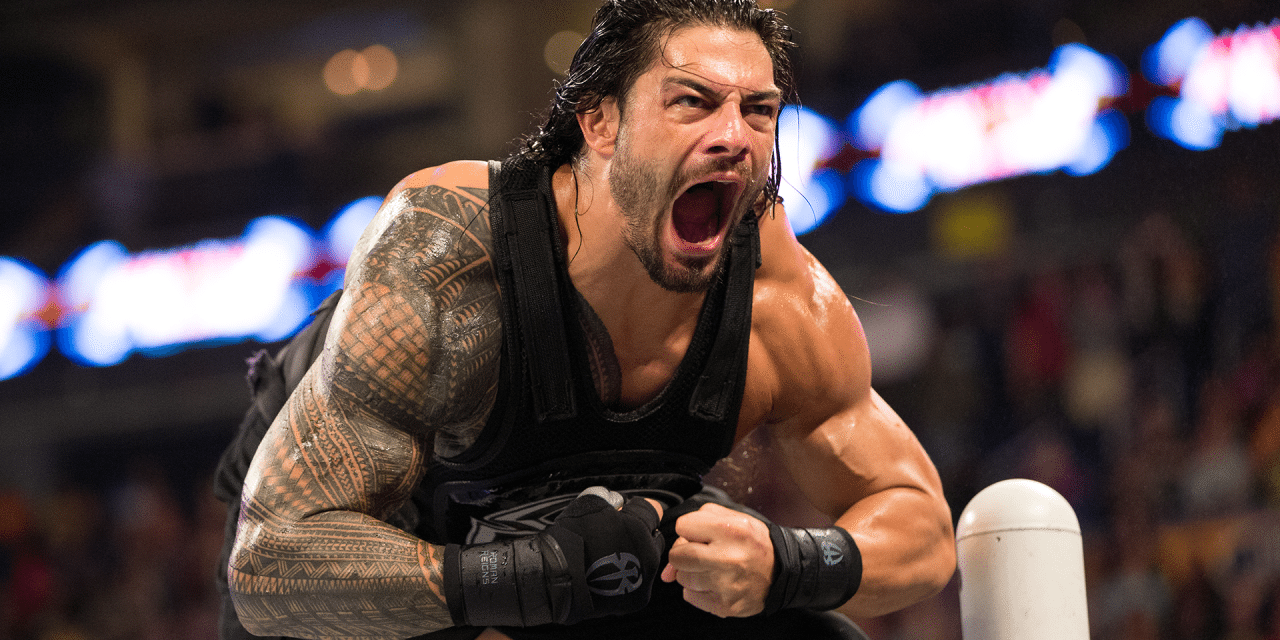 By now everyone following WWE with any regularity knows that Roman Reigns isn’t a good guy. He isn’t a bad guy either. He’s simply the guy, meaning he’s the WWE Champion. Since WrestleMania 32 the creative direction of the character has intentionally offered few persuasions one way or another; a unique response to consistent backlash against the character’s coronation as the next ‘top guy’. Unlike the similar situation with John Cena, the freedom afforded to the WWE universe (or WWE’s concession depending how you interpret the situation) does not conflict with the greater narrative of Reigns’ character, allowing an environment for a coherent and compelling story to exist. Transforming Reigns into an ambiguous character has created the best incarnation of the character to date, allowed Reigns to become more comfortable with his creative execution and produced the most intriguing main event storyline in years.

The significance of Reigns’ current trajectory cannot be understated. Never before has WWE presented their would-be top act as anything other than a supreme hero; an infallible protagonist made exponentially stronger by a never-ending supply of credible villains and compelling adversity. This monumental shift in booking philosophy is a noteworthy experiment on multiple levels. The success of this creative choice certainly has direct implications on Reigns’ viability as the kind of headlining act the promotion believes him to be. With few wild cards left in the proverbial deck, the failure to lead WWE into an important new era of the brand will leave both sides little maneuverability moving forward.  At the same time, the success of this experiment may prove to have positive ramifications further down the card in terms of both character presentation and development.

The battle between forces of good and evil is an archetype that has dominated pro wrestling storylines dating as far back as Frank Gotch and George Hackenschmidt in 1908.  Gotch, an American hero, first battled the villainous Russian Lion in April of that year; a match designed to unify the American and International Championships. Three years and a bitter war of words later, the two drew 30,000 spectators at the newly opened Comiskey Park in Chicago to settle the rivalry once and for all. Naturally Gotch was victorious on both occasions, laying the framework for the foreign heel angle that remains prevalent today. 108 years later the medium continues to be driven by the same core storytelling principles as it did when Gotch and Hackenschmidt ruled the ring.

Good guys—babyfaces—represent everything pure in the world around us. Babyfaces follow the rules, they work hard and they embody a set of characteristics collectively deemed important by society. Bad guys, better known as heels, lack even the slightest of redeemable qualities. Heels routinely break one or more of the seven deadly sins universally acknowledged by cultures across the globe; it’s the only way they can advance. By employing basic human psychology bookers entice their audience to emotionally invest in hero characters, which in turn creates a mob-like animosity toward the heels.

Though pro wrestling’s brand of storytelling is often dismissed as overly simplistic by ignorant detractors, the story of good versus evil (using a variety of plot devices and well-placed metaphors) remains the oldest and most exploited archetype in the history of human storytelling. The theme is present in most theological scriptures, significant myths like Beowulf and Oedipus Rex, literary classics like Heart of Darkness and The Jungle Book and fairytales like Cinderella and Red Riding Hood.

Swiss philosopher Carl Jung interpreted the archetype as a collective unconsciousness shared by all of mankind based on universal emotions like love and hate. Years later American mythologist Joseph Campbell, expanding on the theory of psychic unity, identified a greater narrative in these stories and others, outlining what he called The Hero’s Journey; a series of incremental stages all heroes must go through in order to be made complete. Campbell called the variations of this singular narrative, the monomyth. According to his research, the monomyth was mankind’s collective attempt to make the world transparent to transcendence. In layman’s terms, Campbell believed human civilization unconsciously created a singular narrative structure for the purpose of explaining the mysteries of the human experience, thus proving his theory of psychic unity to be accurate.

Turns out babyfaces and heels aren’t so simplistic after all.

In the wake of Campbell’s groundbreaking research storytellers began actively using The Hero’s Journey archetype as an outline to create gripping fiction, filmmaker George Lucas being among the first to admit as such. The Star Wars franchise remains the most commercially successful application of the monomyth to date.  Other notable mainstream applications include Disney’s The Lion King, The Matrix and the Harry Potter series.

As the pro wrestling industry became more focused on episodic storytelling it was only natural that the business gravitated toward The Hero’s Journey archetype as well. By the 1970s most promotions established a television schedule conducive to the kind of progressive storytelling required to produce a compelling journey. A babyface is presented with an external conflict, embarks on a metaphorical journey, ultimately overcomes the adversity and ends in better shape than when he started.  WWE has never strayed from this outline when presenting its’ fiction; an omnipresent line between faces and heels maintains the balance of power within the roster according to how Vince McMahon sees fit.

As substantial as the monomyth continues to be from both a sociological and pop cultural standpoint, an alternative brand of storytelling devoid of clearly defined protagonists and antagonists does exist; these stories are centered on conflict itself rather than an existential journey. Homer’s The Iliad (adapted for the big screen in the 2004 film Troy) remains the best example. Other prime examples include novels like Lord of the Flies and The Road, which won a Pulitzer Prize in 2007.

This kind of complex storytelling has traditionally been absent from pro wrestling storytelling for a variety of reasons. Stories without a primary hero are in stark contrast to a model with a proven record of drawing money. The more complex a story becomes, the more the audience is forced to think. Deep thought and pro wrestling do not make pleasant bedfellows, or so I’m told. This illogical theory is the result of a deep-rooted mistrust bookers hold against their audience; an almost subconscious insolence that dates back to a time when the magic of pro wrestling was not as obvious as it is today.

A similar argument makes the case that the absence of a clearly defined hero prohibits universal engagement from the audience; a divided audience is a confused audience and a confused audience is incapable of emotionally investing in a story. No emotional investment translates to no profit. Once again, this is a fundamentally unsound argument that fails to acknowledge the fact that most pro wrestling fans have a mental capacity above that of a toddler (a stereotype made more difficult to disprove thanks to Twitter). The absence of a clearly defined hero is only confusing when the story is structured in a confusing manner. Stories based on conflict still require strong characters on either side of a compelling conflict; characters with clear motivations and distinct characteristics. Stories focused on conflict require a clear vision and allow for less flexibility as they progress. Stories presented within the structure of good versus evil are certainly easier to produce. The difficult nature of an undertaking is not credible criticism; it’s an excuse to justify laziness.

The most recent WWE title program involving Reigns and AJ Styles is the perfect example of a sound conflict-driven story between two morally ambiguous characters. Neither performer exhibited specific characteristics associated with a babyface or a heel. Instead, both characters were driven by a single motivation, the WWE Championship. The unique personalities of both characters shined through a logical and realistic conflict, creating a polarizing atmosphere as fans on both sides willingly invested in the conclusion. No confusion. No apathy. No backlash. On the contrary, the fanbase appears to be rejuvenated by a renewed sense of excitement.

It would be impractical to build an entire roster of ambiguous characters. The creative direction of Reigns’ character places him (and by extension those who work with him, like Styles and Seth Rollins) in a unique setting that further raises the stakes of a respective storyline. Interestingly enough, however, multiple mid card characters have recently been written in such a way that blurs the lines between moral and ethical boundaries. Kevin Owens is the greatest example.

Outwardly Owens appears to be a classic heel, he’s obnoxious, overly aggressive and displays an inherent disdain for the audience. However, a closer examination of the character reveals he is less of a villain as one might think. Though Owens often gains an unfair advantage throughout the course of his matches, he does so as a result of a well-documented internal desire to provide for his family. Owens positions himself as a determined prize fighter concerned only about the next prize to be won. This may certainly make him a selfish character, egotistical even, but it doesn’t make him an outright heel. The character’s ethics are certainly questionable, a point articulated by Sami Zayn prior to their match at WWE Payback. Still, yet a large portion of the audience cheers for Owens, much more so than the babyface version of Reigns.

The morals of a character do not necessarily define that character as inherently good or inherently bad. Beloved characters like Michael Corleone and Tony Soprano routinely ordered the murder of their enemies; a ruthless but necessary practice in order to protect the power and wealth acquired through organized crime used as a means to provide for their families. At the same time these seemingly sociopathic characters also displayed positive characteristics like love and loyalty. It is not far-fetched to place pro wrestlers like Owens, Rollins, Brock Lesnar and Samoa Joe in a similar category as these iconic characters. While notable for their complexity, the audience is often more inclined to gravitate toward these characters than one-dimensional archetypes. It’s no coincidence that Owens is one of the more popular characters on WWE’s main roster since his call up from NXT last year.

Whether or not complex characters like Owens are being carefully crafted in the same vein as post WrestleMania-Reigns is unclear; it’s also not all that significant. What’s important is that they are allowed to exist based on genuine connections created with the audience on an organic human level. Black and white characters like Cena will always have their place in pro wrestling; the concept of a larger than life hero has proven capable of withstanding the test of time. At the same time the world is comprised of various shades of grey; it is as complex as it is predictable. There is no reason the same can’t be said for our pro wrestling as well. 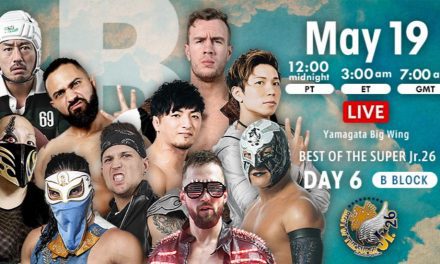