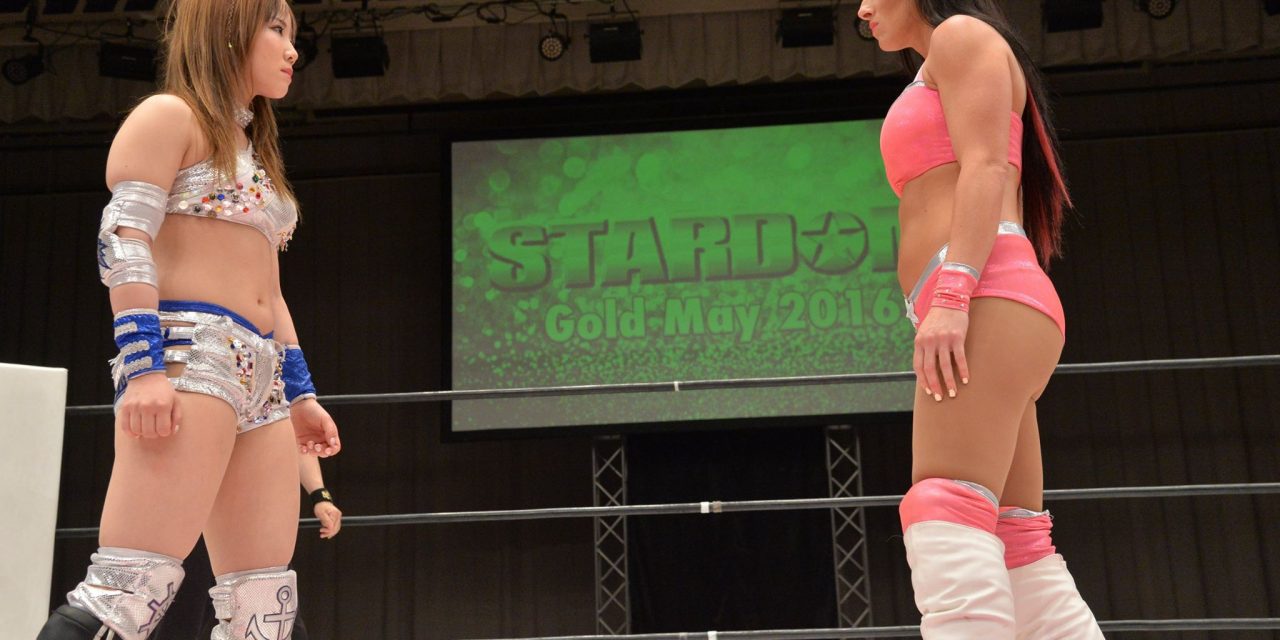 The more things change, the more they stay the same. Gold May continues the feuds established within the Cinderella Tournament, but how do they affect Stardom for the rest of the year?

These opening matches seem to be different every time, as Azumi is feuding with about three or four people. This is obviously focused on her long running rivalry with Starlight Kid. I’d like to see another singles match on a big event between the two, or even watch them mix it up with the slightly more advanced rookies (Watanabe, Mimura and Kyona). It’s the usual schtick here. I like that no Stardom three on three match can be complete without a team pose whilst standing on, or having a boot in the face of an opponent. The trope is so infectious that both sides cheer to the crowd together as Nishina is held in a submission. As always, this match is full of a tremendous amount of young talent, which is showcased in a slightly longer bout than you’d expect from a regular weekly show. Starlight Kid hits the standing moonsault for the win.

Post match, Kid proposes an allegiance between herself and Azumi, asking her to team together for Tag League. “Mini Stardom! That’s Mini-Star for short.”  Azumi refuses. She then teases her entrance into the Rookie of the Year tournament instead, but decides she’ll message Fuka and Ogawa on LINE instead. Azumi is fantastic. **½

Well, it looks like Matsumoto has returned to her own status quo. Two golden opportunities to turn her into a face after the Kagetsu turn, or into main-eventer in the Cinderella Tournament were squandered. Instead she’s rocking a tweener approach that she is admittedly great at, but it’s painfully underwhelming. I can’t help but smile when I see Natsuki Maki. She’s got a long way to go in ring but she’s incredibly fun to watch. Her expressions and connection to the crowd is already there, and the popstar gimmick is a natural fit that I’m surprised there aren’t more examples of in joshi. She’s hilariously outsized here, and her attempts to put on a dance routine with Matsumoto go south quickly. Despite a few hope spots, Maki taps to the torture rack. Still, she’s one to look out for in the near future. **

Oedo Tai is back on a roll and that’s great. They look to be going after the Artist titles next, which they should absolutely win to shake up the top of the company. After this event, Threedom own every title in Stardom: that’s five championships across three wrestlers. The Oedo Tai team isn’t perfect; Diosa isn’t sticking around forever and Kimura is retiring this year, but we desperately need some kind of change. The Rookies launch right into a three on one assault of Diosa, of course ending in the group pose. They always put on a great match, and seem determined to prove themselves as the next big three in Stardom. Oedo Tai get Kris Wolf involved in a beatdown when the ref takes a tumble. Can’t wait to see her back, but right now she’s doing a great job showing off a variety of expressive grins at ringside. Kyona fails to put away Kagetsu so she (without consent) picks up Mimura and powerbombs her into the pin instead. Kagetsu still kicks out and avoids a triple dropkick, follows up with a Falcon Arrow, and gets the win. **¾

Gaijin are an integral part of Stardom’s formula. They come in, they get up to hijinks, and then they get booted out by Io Shirai. Two gaijin going after each other almost feels redundant? They aren’t ‘invading’ anymore, and it’s far less interesting. Especially when it’s the likes of Maya and Viper coming in; all they do is dull the main event scene for a while. Ideally, gaijin should show up and establish their motives (which have all been the same recently) on their first show, and pursue them until the natural finish, then go home. This is the clash of titans rematch from the Cinderella Tournament. What’s supposed to be a blood feud ends up being rather boring however. The ref gets involved whenever the match gets going and the pace is far too slow. They go over to the entrance way but they don’t BRAWL over there, they just kinda walk over, do a move, then walk back. Alpha Female gets the win with the Omega Slam. *¾

Alright so, Hojo has been on a losing streak for the better half of a year now. She’s won here and there but has been embarassed repeatedly and exposed as the weak link in Threedom. Way back in January she lost to the returning Santana, but then drew with her in the Cinderella Tournament. Santana has given her one more shot at the title and she finally came through. This isn’t as good as it sounds though. Hojo is up there with Sami Zayn and Tomoaki Honma as one of the best scrappy underdogs in wrestling. The heart and soul of Stardom, gaining huge amounts of support during her feud with Meiko Satomura and the downward spiral that followed it. The big win she needed to get back in the game should have gone one of two ways. She either had to beat Satomura, or beat Io for the world title. Garrett is great, and all their matches have been great too but this isn’t the year long story finish I was hoping for. Maybe that’s my fault, but I can’t help but feel underwhelmed despite how well Hojo is playing her role. Remember when Honma struggled through 2015 with no wins and then just suddenly beat Ishii in the G1? It was a great moment for sure but it was just some random show with no commentary, there was no grandeur.

As I said, the match is awesome. They start right where they left off and start beating the stuffing out of each other with elbow strikes. It plays off spots from the previous two matches perfectly and sates my hunger for more time after the time limit draw finish. Hojo delivers the best damn elbow drop in professional wrestling and takes the white belt. Don’t get me wrong, this IS a beautiful moment, there are tears, a speech, respect and hugs, and that’s exactly what I want to see in post match. Lets hope Hojo’s reign is a long one, and Io keeps her distance. ***½

I’ll reserve my judgments towards the result until after I talk about how damn good this wrestling match is. These two are champions together, and have tagged together in Thunder Rock since 2011. Normally the loud, smiley one is Mayu, but she’s intensely serious tonight. Io meanwhile is keeping her cool, like she always does. Io must be uncomfortable with her best friend in the number one contendership spot, especially as she’s been beaten by her before. If that’s true though, she’s not showing any of it. Her approach to the match shows her nerves however. The lock up takes a tantalizingly long time, keeping you on your seat waiting to see who is going to get the early advantage. Then it all breaks down. Locking up is replaced by trading stiff kicks. Mayu is proving to Io that she really does want the red belt “more than anything”. They know each other so well that most of the early match is spent dodging and reversing. It’s all incredibly fast paced and engaging; the war doesn’t pause for a second. But then Io pulls ahead and it’s almost embarrassing. Io even backs off and lets Mayu get back up only to send her right back down again. It’s not easy for her to reject Mayu’s wish, but what choice does she have? When Mayu eventually gets back into it, she spares no expense. There are just so many unbelievable sequences and maneuvers here that there’s just no way I could do them justice in text alone, it has to be seen. Io beats the count out by a slither of a second then gets caught in a delayed bridging Dragon Suplex. She kicks out of it, then another, before securing the win with the Moonsault. ****½

An emotional moment is ruined by Oedo Tai. Kagetsu and Kimura challenge Io and Mayu for… all of their belts? They get pretty meta and blame Rossy Ogawa for favouritism, making the fair point that Stardom revolves around the three ‘Daughters of Stardom’. They seem to be challenging for the tag belts first, but Kagetsu also has her eyes set on the High Speed Title.

Io introduces Stardom’s latest graduate: Arisu, who will be making her debut on the 29th. Not only that, but both Kris Wolf and Yoko Bito are scheduled to return too! I’m excited for all of this, but I’ve said it before and I’ll say it again, Stardom’s formula has to change, there needs to be a serious shake up at the top, and I hope it comes in the form of Yoko Bito. Thanks for reading!

To watch Stardom, you can subscribe to Stardom World on YouTube with a monthly recurring payment of $4.99/£3.99. Shows generally happen on Saturday and each match is uploaded a day at a time, culminating in Main Event Friday. As well as that, there is plenty of original programming and classic matches. Enjoy! 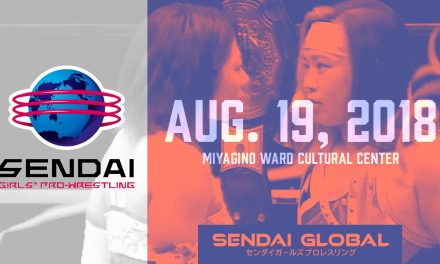