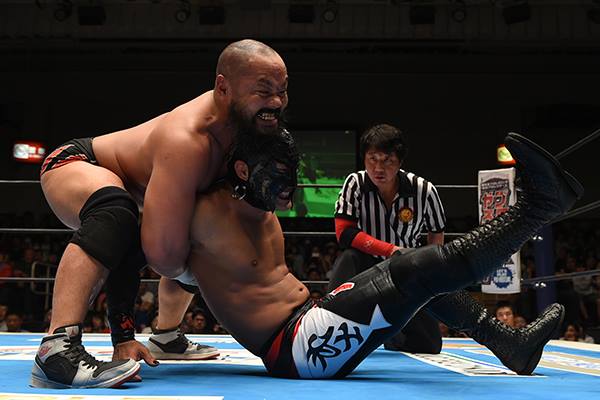 It’s that time of the year. My favorite tournament in wrestling is back as for the next few weeks, the junior heavyweights get their chance to shine bright on Japan’s biggest stage. This is the 22nd annual Best of the Super Juniors and seemingly every year, someone is made a star or a handful of lads put on jaw-dropping spectacles that only junior heavyweights can do. New Japan has a loaded field this year with ace KUSHIDA, prodigy Will Ospreay, red-hot BUSHI, and a plethora of other talented workers. My excitement can’t be contained for this tour.

A very hot way to kick off this year’s Best of the Super Juniors tournament. Volador, Fish, Beretta, and Ospreay are all B Block participants who will shine later on in the tournament. The thing to note here is Ospreay, who once again had an opportunity to shine and show off some big moves. It seems very evident that he will be doing big things in this tournament. On the other side, it was Volador Jr. who looked great. He picked up the pinfall over Beretta. Fun match. A great preview for the B Block. ***1/4

This was less about showcasing juniors and more about Katsuyori Shibata continuing his feud against the New Japan Dads and current NEVER Openweight Champion, Yuji Nagata. Nagata brought along his junior dad friends, Liger and Tiger Mask, both of whom will be competing in the B Block. Shibata had a pair of youngsters by his side – Juice, who just came off a hot match at Lion’s Gate Project 2 (his chest was showing the aftermath of Go Shiozaki abuse) and Jay White, who is rapidly making strides. Things heated up towards the end with White and Nagata, as White began using Nagata’s taunts against him, a ballsy move for a Young Lion. This was quick, and more importantly, incredibly fun. Shibata and Nagata have great chemistry and their teammates helped create a really unique match. Anytime Liger wrestles Shibata or White wrestles Nagata, I’m down. ***

Tanahashi, even more so than normal, took the night off here. Besides a mediocre (at best) hot tag, he did absolutely nothing. This could have been a cool showcase for Ricochet and Chase Owens, but this match was more focused on Yoshitatsu fending off Kenny Omega and his goons. This was a far cry from the prior two matches, which flew by. This dragged on for what felt like a half hour. Skippable, boring match. Watch Kenny Omega sweep a Tanahashi bear out of a poor woman’s lap in the front row and save yourself some time. **1/4

For what it’s worth, Omega and Tanahashi continued their angle building up to their ladder match at Dominion after the match when Omega trapped Tanahashi’s arm in a ladder and then proceeded to smash it with a steel chair. I have not been too hot on the angle, which is more of a reflection on my overall feelings on the Bullet Club and how I can’t muster up the strength to care anymore, but the crowd reacted to this with extreme heat. Omega, even at his goofiest, is a great heel. Tanahashi was stretchered off and I wouldn’t be shocked if he rested up for the rest of the tour. Great angle.

No BOSJ competitors in this match – this was simply about continuing the LIJ vs. CHAOS feud, which still feels rather fresh. LIJ works, especially with this trio incarnation. SANADA stood out here as someone that can be something great. This is probably the best he’s looked in a New Japan ring thus far. Okada and Naito interacted just enough to leave me fully anticipating their rematch at Dominion, and both YOSHI-HASHI and EVIL played supporting roles well. This was a step below some of the trios matches with BUSHI in SANADA’s place, but these matches continue to be fun. ***1/2

This is Rocky Romero’s seventh appearance in the Best of the Super Juniors. Finlay is back for his second year in a row and looking to improve his 0-7 all-time record in the tournament.

Destined to change his luck in the tournament, Finlay jumped Romero before the bell and led an onslaught on Romero’s taped up shoulder. Between being stretched by Yoshinari Ogawa two days prior at the aforementioned LGP2, and the simple fact that Finlay has Finlay blood in him, made him great at being crabby and targeting a limb. Finlay is so young, but with matches like this, he shows that not only is he great and belonging in a tournament like this, but he will only improve as his career goes on.

Romero is one of the most underrated wrestlers on the planet and here, he was a total pro. He made Finlay look outstanding before eventually putting him away with a vicious knee strike. Don’t skip out on Romero’s matches in this tournament. He’s good for a handful of quality matches during this tour. Great way to kick off BOSJ this year. ****

For results of our NJPW Best of the Super Juniors Pick’Em contest, head over to our forums!

This is BUSHI’s fourth year competing in the Best of the Super Juniors. For Gedo, he reaches double digits with his entry this year.

Gedo is a national treasure. At times, he may not be the most exciting wrestler, but he keeps me engaged from bell to bell. I can’t take my eyes off the screen when he’s in a match. BUSHI was made to look like a star here, and for the most part, he did. He got his moves in and dominated the veteran for a large portion of the match. It was all for not however, as this was not Gedo’s first rodeo, and as our good friend Alan4L dubbed it, the Rainmaker Haymaker, followed by the dastardly Gedo Clutch but down the LIJ junior. Outstanding performance by King of Korakuen, Gedo. ***1/2

Taguchi is the veteran of this field as he is back for his 11th appearance in the tournament. Sydal is the youngster in the A Block, as he makes his tournament debut here.

My word, I could not have pictured this match being as good as it was. Sydal clearly belongs in this field. He’s an elite level worker, one of the best talents in the world, and he showed that here. Taguchi, as many of you know, is Taguchi. Most of the time that’s not a good thing, but tonight it certainly was. Taguchi was busted open hard-way towards the halfway point and it completely changed the dichotomy of this match. He was goofy in the beginning, but once the blood started dripping, Taguchi put up a fight. How dare this gaijin come in and give me a shiner? Taguchi is former winner, he won’t get shown up like this! He and Sydal tore it up down the stretch and created one hell of a finish. Props to Taguchi for battling through the pain. I can live with this being his best performance of the tournament. ***3/4

A rematch from last year’s outstanding finals. This is KUSHIDA’s sixth appearance in the tournament and O’Reilly’s second.

If Marty Scurll and Will Ospreay are the punk rock feud of pro wrestling where the two face each other in seemingly every nook and cranny the wrestling world has to offer, O’Reilly and KUSHIDA have become a big-time touring rock band, selling out stadiums and tearing the house down when need be. In the past 12 months, they’ve faced each other four times. First in Tokyo to close out last year’s incarnation of the Best of the Super Juniors tournament (a classic junior heavyweight spectacle) before taking their feud to York Hall in England for Rev Pro. Two weeks ago they clashed again in Toronto at the Ted Reeve Arena for the ROH/NJPW joint show, and now, they’ve taken their series of matches to historic Korakuen Hall, and once again, they tore the house down.

KUSHIDA has had tons of praise thrown his way in 2016 and rightfully so. At his best, he’s one of the very best wrestlers in the world. Amazing technician, tremendously charismatic, an elite junior heavyweight, and one of the better babyfaces in the world. This was the Kyle O’Reilly show, however. He’s worked his ass off for years and as he approaches his third year in New Japan, he is on track to become a bonafide star. reDRagon has been protected a ridiculous amount, but here, in Korakuen, battling the IWGP Junior Heavyweight Champion and winning – this was his coming out party.

These two have absurd chemistry that is only matched by a few. It will live in infamy as a gif, but the armbar spot on the outside where KUSHIDA literally jumped out of a chair to catch Kyle is one of the most exciting and innovative spots I’ve ever seen in professional wrestling. It was brilliant. These two brought the fire and passion that I look for in wrestling and it was backed up by extreme skill. These men understand what they are doing in between the ropes and will continue to dominate the squared circle for a long time to come. This was masterful. ****3/4

This probably won’t finish in my Top 3, but I could see a reasonable argument for someone thinking this is one of the best shows of the year. Nothing dragged. Even the Bullet Club eight-man had a hot angle to make up for the lame match. The opening tournament matches were all outstanding. Gedo was great, Taguchi had his best performance in ages, David Finlay had the night of his life, and O’Reilly and KUSHIDA did what they do. Watch all the tournament matches. Check out the opener if you want fun flips. Double thumbs up. Great show.

For results of our NJPW Best of the Super Juniors Pick’Em contest, head over to our forums! 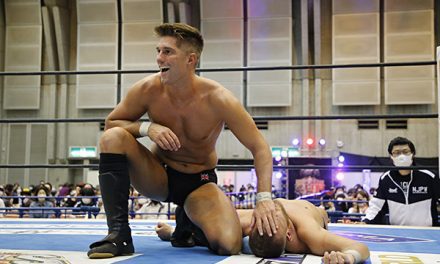