Extreme Rules 2016 is here! The annual time of year where WrestleMania rematches mix it up with some fresh blood in various somewhat, sort of, almost extreme type matchups. This year – and who would have though this card was possible a year ago – AJ Styles battles for the WWE World Heavyweight Championship, Karl Anderson & Luke Gallows take on the Usos, and Charlotte defends her Women’s Championship in a submission match against Natalya.

Baron Corbin is about as forgotten as someone can be despite weekly appearances on Raw and Smackdown, and two straight PPV(ish) matches since debuting. Yeah, he lost to Dolph earlier this month, but now we have no disqualifications. That means Baron Corbin could literally drive a motorcycle to the ring, run over Dolph, than casually cover the man inside the ropes for the victory. If that doesn’t happen, this match is a waste. Prediction: Baron Corbin

I don’t expect a match here. It is interesting that we got this match announced via the website after WWE Raw, as before that, these two teams being involved in the night’s main event was the only real storyline. Could this match somehow act as a way to take out the interference option in the WWE Title match? I think so. It may be off the wall thinking, or maybe you’re having these same thoughts (if so, good on you!)… but I see this Tornado match acting as a way for the two teams to beat each other up, do some crazy spot, and dismiss the option of either taking part in the main event. Prediction: No Contest

There are so many possibilities for the summer if Sami Zayn is to win here. However, there are nearly as many still if The Miz takes the belt back home. I like these two guys as my two favorites to win the match. If Owens loses again, and isn’t involved in the pinfall/submission, I wonder where he goes. Could we possibly see Owens demanding a shot in the Money In The Bank ladder match so he can guarantee a one-on-one match someday? May Owens just go nuts, beating up Shane and furthering his already developed next evolution of a Stone Cold-type character? With these four top workers, plus the endless possibilities from any result, this match is one of my most anticipated of the evening. Prediction: The Miz

While Jericho stumbled through the AJ Styles program like a party goer on New Year’s Day, he’s done pretty well in this Ambrose picture. From his reactions on Monday to Ambrose’s stipulation reveal, to his match with Dean at Payback and more… Jericho has definitely been the better of the two so far. Now, we get a cage match with weapons. Prop Comic Dean Ambrose strikes again, but will it be enough to win the debut of his new match gimmick? Maybe the more interesting thing to look for will be whether or not the match itself gets over, as we could see it down the line in further Ambrose storylines in the future. As for Sunday, I’d give the nod to Ambrose and move him on to Wyatt or Orton when they return. Prediction: Dean Ambrose

Given the main event spot of Raw on Monday, Natalya is in the highest profile match she’s seen in many years. In NXT, Charlotte’s program with Natalya drew rave reviews. So far on the main roster, however, that hasn’t been the caee. I like the submission story for this one, though, as I think it gives the two the chance to focus on what they do well. Sure, we’re going to see a lot of quick sub attempts early and often, but I think with the proper notice these two will have a good idea of what they want to accomplish on Sunday. With that notice, the match idea should be solid. I see no shot of a Natalya victory, but with the uncertainty of Sasha Banks being next for Charlotte, anything could happen. Prediction: Charlotte

The crazy, wacky, hardcore, extreme stipulation for this championship clash is… a tag team match! I’m on the side of the fence that thought Raw’s “Time Machine” segment was somewhat entertaining throughout, and hilarious at parts. I enjoyed it. It was silly, and the camera tricks were not-built-on-reality, but hey… it’s a TV show. Let them experiment, I say. We always talk about being tired of the same old stuff, so when they try something new, let’s avoid shitting all over it just out of spite. I’ll give them the break. Plus, Kofi was great. Anyway, the title match… Vaudevillains have a ready made program with Enzo & Cass, and the titles being added would be a nice touch. Prediction: Vaudevillains

Rusev is winning the title here, and I’m quite excited for the match. I enjoyed the two Ryback – Kalisto matches from the past two PPVs, and with Rusev being double the worker of Ryback, how can this not be great!? With Lana, Rusev has steam again as he’s gotten away from the League of Nations disaster. Plus, with a slew of babyfaces set to return soon, Rusev at an elevated level is necessary on WWE TV right now. Prediction: Rusev

Here it is – the big one! For two straight PPVs, it is the main event that I feel is the real main event. AJ Styles has proven he is a valuable commodity in WWE, earning himself a spot in the upper echelon of the roster even when the big guns like John Cena and Randy Orton come back. Roman, for his part, has done pretty great himself in the buildup to this match. As Tracy Smothers would say, he’s a “tweener, man!” He’s talked less and kicked ass more, which is how he began getting over in the first place. Good! Whether The Club or The Usos get involved or not, I have built up quite a bit of faith in this storyline since it began and am looking forward very much to seeing this match take place.

It’s highly unlikely AJ Styles wins the match given what we know about talents returning, and plans for Roman vs Brock or Cena at SummerSlam. But hey, what if WWE were to shock us with an AJ win. We’d all go nuts, in a good way. I like Roman, a lot more than most seem to. But AJ winning would still be super welcome. It’d be a sign of a shake up, a sign of unpredictability and a chance to truly mix in AJ with the top tier of WWE for the summer. This of the chaos!

At the end of the day, while the result matters of course, the stipulation of the bout allows for a crazy final half hour of a PPV. I’ll sit back and enjoy, then think of all the future implications afterward. In the future. Prediction: Roman Reigns 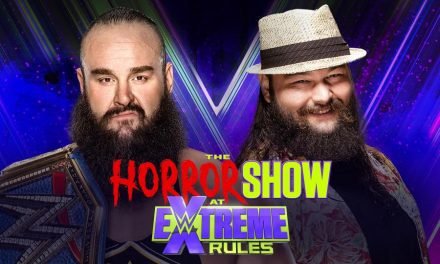 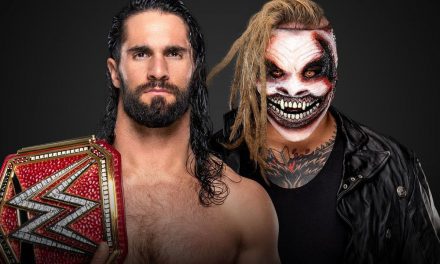