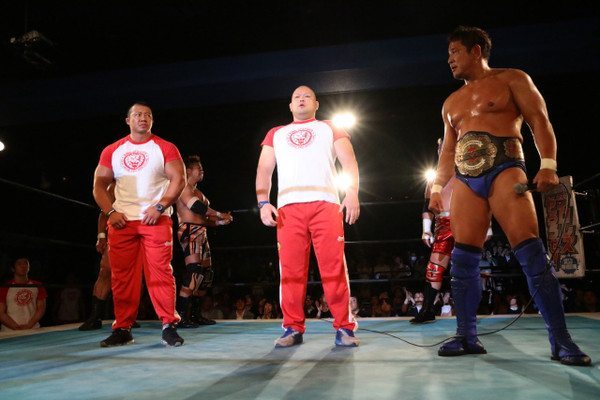 The FACE has a rep for being a quiet building, but right off the bat in this one it felt like the hot crowd from Lion’s Gate Project1 carried over. Kawato immediately looked more polished than the last time I saw him, which is a really good sign for a 19-year old wrestler with less than 30 matches under his belt. He was going step for step with Kiyomiya, who is the same age but has twice as much experience in terms of raw matches worked.

A very simple story, with 50/50 work until a big Kawato dropkick that looked great. Kawato went for the crab hold, and Kiyomiya slowly struggled to the ropes. Kiyomiya then hit an equally great looking dropkick of his own, and locked in a crab hold. The crowd was going apeshit as Kawato was struggling to the ropes. The fans at The FACE totally understand the concept of these shows and react to everything like these kids are working across town at the Egg Dome. Kawato got yanked back to the center and tapped. Dueling dropkicks, dueling crab holds, and the “senior” 19-year old picks up his second career singles win.

The post match had me howling. Kawato tossed away his ice pack and tried to punk Kiyokiya. After a brief scrum Kiyomiya kicked his ass and stood tall. I sure hope this means they’re building a program here, and if so, I’m all the fuck in. **1/2

A battle of dudes who had never won a singles match!

Tomoyose was working with a taped up shoulder, but it never played into the match. Tomoyose is one beefy man, and he used that beef to pound and bully the smaller Kanemitsu. Kanemitsu survived a crab hold and turned the tables with his (soon to be acclaimed) dropkick. Tomoyose crawled his way to the ropes following a Kanemitsu crab hold attempt, and at this point I smelled the draw a mile away. This battle of dudes who had never won a singles match ended with both guys still searching for that elusive win. Strong work by both guys. Tomoyose offered a post match handshake, and Kanemitsu blew him off. The New Japan lions were quite unsportsmanlike in defeat in these first two bouts. **1/2

The sheer amount of grunting on this show was already breaking records by this point, and Quiet Storm hadn’t even hit the ring yet.

Yoshida is a real interesting prospect, one of about a half dozen or so K-Dojo rookies who show real promise. He’s got good size, with a tall frame that can clearly support more weight. His work is already quite crisp, with kick based offense that has good bite, and he looks like a very good seller. His comeback here was fiery, with Kumano doing a good job rocking and reeling for his stuff. Kumano cut him off and won it with a powerbomb, giving NOAH a 3-0 start, and giving us another tidy, well-worked sub ten minute match. Unlike those crybaby New Japan boys, Yoshida was all class and shook Kumano’s hand. **1/2

This was the Ogawa I wanted to see, grumpy, annoyed, and violently attempting to rip Young David’s arm from his body. Finlay was being eaten alive before landing a back elbow on an Ogawa corner charge, and then hitting his now patented top rope missile dropkick. Finlay went on the attack, so you know there were copious European uppercuts involved, before attempting what appeared to be a rolling arm bar. Ogawa sat straight down before Finlay was able to roll him over, and scored a flash pin in what was the most Ogawa finish of all time, before swagger walking straight to the back like the bad motherfucker that he is. Great finish, and NOAH was rolling with a 4-0 record. **3/4

Straight hamming it up, with Genba doing his Finn Balor shtick, Yone in comedy mode, Taguchi wearing a fake afro, and Captain NOAH doing whatever the fuck it is that Captain NOAH does. Yone did his best “Makabe in a mid card six-man tag” impression, which means he disappeared and I forgot he was in the match. Taguchi put away Genba with a flying ass attack, in a match that I personally could have lived without because I’m a grump who wants super serious wrestling, but he fans ate this shit for dinner. **

Jay White has been a real joy to watch lately, with some very spirited performances against the likes of David Finlay and Kenny Omega. He was at it again here, full of piss and vinegar against Naomichi Marufuji, who himself put in a tidy little performance in what to this point was the best match on the show.

What I like about White, is that as he’s inching closer and closer to beating a higher ranked dude, that story is carrying over from match to match and being projected into his work. He’s recently lost to Ogawa, Omega, Taguchi, and now Marufuji, and in each match he’s had moments where he looked like he was this close to pulling it out. All the while, he’s been positioned over and beats all of the other lions like Kanemitsu, Kawato, and Finlay, who he owns a long win streak against. Part of the reason for the dominant run against Finlay may be because they see White as a future heavyweight, whereas Finlay has been booked in the last two Best of the Super Juniors, and always seems to face juniors when he lands a featured singles bout (Ogawa, Ishimori).

Marufuji won this with the Shiranui, which might be significant, and might not be. That’s his old school go-to finish, and he doesn’t always use it (especially lately). Perhaps the idea here was that it took a powerful move to put the gutsy White away. Or perhaps I’m a dope who just over thinks these things. ***1/4

One thing Juice Robinson has always been great at is selling and bumping. It’s an excellent base skill to have, because the ability to make others look good is always valuable to promoters, and it’s what made Juice such a good enhancement guy in NXT.

Juice’s ability to bounce around was on full display here, as he absorbed a beating for the first eight or so minutes of this match, and then took some of the wildest bumps you’ll ever see a moment’s later during the hot closing stretch. Whether he was getting chopped to death and beaten down by a very on point in his own right Go Shiozaki, taking wacky flip bumps in the corner, or getting decapitated by a match ending lariat, Juice’s selling was in top form here.

When it came time for hope spots and his own high impact offense, he dished out as well as he took with stuff like a nasty looking palm strike and a gorgeous powerbomb. The match built perfectly, with tremendously placed highspots, and a finish that came just at the right time. This Go reminded me of the Go that had the great Triple Crown run in early 2015, and had me excited for his eventual GHC title win. Go looked like an ace here, and Juice, who had the fans at The FACE all fired up and rallying behind him, looked like a guy who is adding pieces to an arsenal that already featured what can sometimes be the hardest skill to master. For the second Lion’s Gate show in a row, Juice stole the show. Might as well start calling these things Juice Gate Project.

Technically, since Yone teamed with Taguchi, a NOAH wrestler was on the winning side of every match on the show heading into the main event. This was way better than it had any right to be, all action, with every single participant wearing the proverbial working shoes. The best exchanges involved the best talent in the match, with Kitamiya going toe to toe with Kojima, and Nakajima taking it right to Lion’s Gate kingpin Nagata. Even Nakanishi looked as spry as 2016 Nakanishi is going to look, and Quiet Storm grunted his way to a good performance, too. We got the predictable finish of Nagata pinning Not So Quiet Storm (who seriously, was in extra grunty form here), and nothing was set up for the future, but I can’t say this is skippable based purely on the action.

Nagata called yet to debut top prospects Katsuya Kitamura and Tomoyuki Oka to the ring, and presumably announced their debuts for Lion’s Gate Project 3. Oka is considered a blue chip prospect and a future ace, and his first bout will be the most anticipated puro debut in many years. ***1/4

I can only recommend skipping one match (the comedy tag). This show won’t knock your socks off, but it features solid work up and down the card, with strong work by the young boys in the early portion, and a borderline great match between Go Shiozaki and Juice Robinson. Lion’s Gate Project isn’t for casuals, but these shows have plenty to sink your teeth into if you’re the type of fan who enjoys watching young wrestlers grow and develop.