Jeff smashed Dark Willow and sought to unmask him before another Evil Willow appeared. They beat down Jeff until a third Shadow Willow appeared. Shadow Willow unmasked himself to reveal Matt Hardy underneath the mask. Matt said Jeff loved Willow more than he loved his own brother. Matt said Jeff’s mistake was that he never finished the job and what was left of Matt Hardy is now scarred. Matt Hardy’s deranged and broken voice sounded like he was doing his best Mick Foley impression. Matt choked Jeff out and left. I can understand how this probably looked like a cool idea on paper – with a changed and shattered Matt Hardy using Jeff’s own creation to try and take his brother down but I don’t think it entirely landed, particularly Matt’s performance. Elements of Matt’s performance, delivery and particularly his appearance landed more as goofy than dramatic and then his promo veered more into melodrama. It served to undercut some of the emotional heft they were going for. *

Allie, the former Cherry Bomb in the role of Maria’s apprentice, informed Velvet before the match that she’d be fired if she lost this match. Velvet got a handful of hope spots in but Sienna dropped her with a facebuster off her shoulders for the win to end Velvet Sky’s TNA career yet again. I’m tentative to write anything about Velvet’s time in TNA because if it was defined by anything it’s been her propensity to leave and then come back. However while her ring work is never something people will write gushing retrospective’s about it would be unfair to take away the degree to which The Beautiful People act got over in TNA. It was novel, it was fresh, Velvet and Angelina Love nailed the role, and most importantly it connected with the audience in a real way. There’s a reason TNA tried to respark that original formula a number of times after and there’s a reason WWE ripped it off for LayCool. It worked, and that can never be taken away from Velvet. She was one of the most popular women in the history of the company *

Mike Bennett was in the ring and said he was calling out a TNA Hall of Famer. That immediately made me think about how Sting, Jeff Jarrett, Bully Ray, Devon, and Kurt Angle are all no longer with the company so naturally Bennett called out the last remaining TNA Hall of Famer – Earl Hebner. Bennett challenged Hebner to a fight. After a great deal of prodding, Hebner slapped Bennett and the match was on.

Before this match Dixie Carter made the main event a lumberjack match. We’ve also seen Billy Corgan in an authority figure role in recent months. So how come Mike Bennett can come out and declare a match vs. Earl Hebner without any recourse or consequence? Was it just a case of none of the authority figures particularly caring about Bennett’s quest to assault a 67 year old man? Bennett decked Hebner but Hebner kicked out. Earl low blowed Bennett while Bennett was berating referee Brian Stifler but Maria distracted Hebner long enough to allow Bennett to beat Hebner with a boot. Bennett even needed Maria’s distraction to beat Hebner. Once again, like the opening segment, I can see what they were going for here – Bennett is a bad person for beating up an old man. But the execution simply made Bennett look like a joke, not a person to be taken seriously in EC3’s quest for revenge. EC3 made the save and Bennett announced that EC3 will face Tyrus in a Last Man Standing match in the latest match on his road to getting a rematch with Bennett.

EC3 wailed on Tyrus including some chair shots and a top rope crossbody before Tyrus dropped EC3 head first on a chair. Its things like that (and his propensity for failing to catch people on dive) that makes Tyrus a liability in TNA. EC3 powerbomed Tyrus through a table but Tyrus beat the count. Tyrus nailed EC3 with a Samoan Spike and followed with a Big Ending on the entrance ramp but EC3 made it up at 9. Tyrus propped a guardrail up on the ring apron but EC3 hit a Samoan Drop on top of it. EC3 buried Tyrus under the ringsteps and hammered it with a chair to keep Tyrus down for the 10 count. Bar a little Tyrus recklessness this was a fun little stunt brawl. EC3 continues on his road to facing Bennett at Slammiversary. ***

There was a short little heat sequence on DJ Z before Edwards got the hot tag. DJ Z hit an awesome suicide dive between the top and middle turnbuckle. Everett ate boots to the face on a moonsault attempt (which caused him to do second backflip), Edwards took Lee out with a dive and DJ Z picked up the win with a jumping implant DDT to Everett. As usual with these matches this was a super fun sprint that only leaves you wondering what they could do with more time. **1/2

Eli Drake was back with his Dummy button for the latest edition of Facts of Life with Eli Drake, with his guest the King of the Mountain champion Bram. Eli Drake, with his Feast or Fired briefcase, suggested Bram simply hand over the KotM title rather than be embarrassed after Drake cashes in his briefcase. Bram forcefully declined and Drake went to leave but Bram decided to beat him up instead before Drake eventually bailed. At least this edition of Facts of Life with Eli Drake actually served a purpose, to reinforce that Drake is hovering dangerously over Bram’s KotM title. And it was much better as a result.

We had a Chris Melendez sighting at ringside for the first time in ages. They aired some really good hype videos during to show (including a Bobby Lashley gym montage that was terrifyingly intense). They started flying out of the gates before Lashley took control after Spearing Galloway into the guardrail. Drew made a comeback before going for the Future Shock but Lashley reversed into a Northern Lights for two. Lashley hit a one armed spinebuster but Galloway kicked out. Galloway was setting up for a Claymore but the lumberjacks pulled Drew out of the ring, causing a DQ. That was a lame way to get to the understandable DQ finish. I’d have preferred Galloway and Lashley to be more actively involved, causing the DQ for being unable to control themselves rather than Drew simply being pulled from the ring. **1/2

Chaos then ensued as the lumberjacks went nuts. Robbie E and DJ Z hit big dives. Lee hit a dive over the turnbuckle to the floor. Edwards superplexed Everett off the top rope onto a pile of people like human bowling. Drake attacked Bram with his briefcase but Jeff Hardy cut him off. Matt Hardy then ran out to brawl with Jeff. EC3 and Bennett came face to face but Lashley took out EC3 with a Spear, furthering their subtle slow build. Drew then took out Lashley with a Claymore and one final dive onto a sea of people to end the show as the final man standing. Bar the weak DQ this segment was a home run. The little taster of the Lashley/Galloway was lots of fun and left me wanting more, the post-match schmohz was a tremendous way to deflect from the DQ finish and it was just packed with really fun moments and a bunch of clever teases for future matches (Drake/Bram, Hardy/Hardy, Lashley/EC3, Lashley/Galloway, the X-Division beef) while all of it served as a really hot way to close the show. This was great stuff.

A show of two halves – the first hour was fairly dull with little of the ideas landing the way I’d imagine they were designed to but the second hour was filled with good wrestling and great angles. If nothing else, seek out the showing closing brawl because that was the highlight of Impact for months. 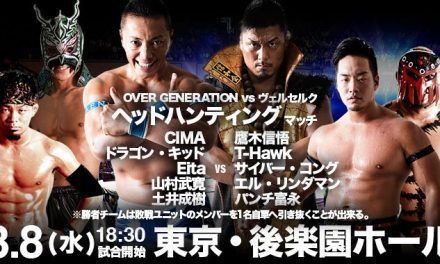