Tom Phillips reminded us that Damien Sandow had won a Money in the Bank match previously (I’d forgotten) which reminded me of a time when I was interested the Sandow. Poor Damo looks in bad shape here, pasty, paunchy and with a big old fake tan stain on his back. Aesthetics aside, Sandow has less than nothing to work with here. Young is atrocious throughout. Maybe he’s disinterested but on three occasions (conservatively) he appeared to forget what he was doing. Sandow, on the other hand, displayed aggression throughout and looked genuinely pissed off at times. Perhaps, he sensed Phillips on commentary suggesting that Sandow was motivated by the arrival of Baron Corbin. To add insult to injury, Sandow was beaten with sloppy Gut Check. Philips got a nice jab in at Young saying he saw Byron Saxton cringe at the finish. We all cringed Byron, we all did. As we now know this was Sandow’s final WWE match. I’ve always had a soft spot for Sandow and look forward to seeing him on the independent circuit.

On this week’s Funeral Parlour, Rowdy Roddy Piper was the guest. Paul Bearer introduced him as ‘Roddy Roddy’ and you could almost hear the bile rise in Vince’s throat on commentary. Piper turned his back on Bearer and demanded that he hit him. As Piper reared back his hand, future star of the Lonely Virgil blog, Virgil made the save and told Piper he’s always have his back. Piper and Virgil put a Dibiase Wrestling Buddie and a doll into a casket.

In a WWF update, we got a vignette of Andre the Giant, Arnold Skaaland and Pat Patterson drinking in a bar. Sherri showed up and tried to convince Andre to allow her be his manager. The segment ended with Andre spanking Sherri. There was also an interview with Mike Christian- who’s Mike Christian you ask? Jeez, it’s almost like you’ve totally forgotten the WBF and its ‘stars’. There was another IRS promo. Vince was really going to town on these before Irwin’s debut.  The Rockers are announced to face the Nasty Boys next week.

In the ring this week, notable in the job matches was good old Pistol Pez Whatley who I’ve watched have a few decent matches on the Network. Obviously he didn’t get to do much against the Big Bossman.

In the main event, Jake Roberts took on Earthquake. Roberts picked up the win via DQ after Jimmy Hart struck the referee. After the match, Earthquake got his hands on Damien (the snake) who Roberts had earlier been ordered to put under the ring. ‘Quake threw the bag in the ring. As he jumped on the snake, the camera shot back and forth to Sean Mooney in the Event Centre. Fans wouldn’t get to see Earthquake landing on the snake until the next episode of Prime Time Wrestling.

Apollo gets a nice video package before the match which makes him look like a star. They need to do much more with this guy. After the great video package and hyping the Apollo Nation, we got Slater and Crews swapping hold for hold. Crews should just be wiping out these doofus’.When, however brief, Apollo gets to shine he looks great. Phillips on commentary done his best to get Crews over but it’s hard to big up a side headlock. Slater got so much offence against Crews that the match moved beyond the realm of believability. Despite the needless back and forth nature of the match, the crowd remained firmly behind Crews although if he continues to be booked in matches like this, I cannot see that lasting. 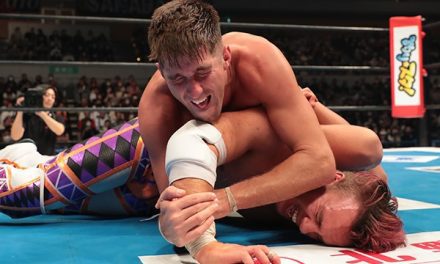 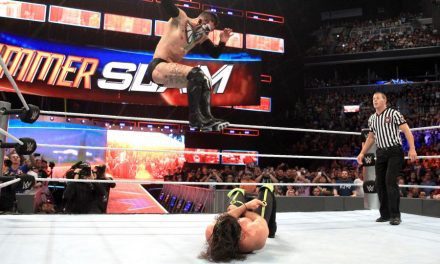