Watch: WWE on Hulu Plus

Welcome to the New Era of WWE Raw… same as the old era?

We are live from St. Louis, Missouri!

The fact that Michael Cole now refers to this as the New Era means it’s branding and trademarked and full of sound and fury, signifying nothing. Stephanie and Shane are talking and overtalking, stepping all over each other’s lines like bad community theatre until Stephanie gives Shane a new version of the framed picture Vince smashed. Then it becomes a game of “no, you go first.” Before the production meeting starts, out comes Kevin Owens, MVP of the WWE. He wants a rematch for his Intercontinental Title and it was in his contract to get one. Oh good, Cesaro’s here to talk too, he had Miz tapping so he should get the first match for the title. Well, let me holla at you playa, we’ll settle this in the ring right now.

Miz and Maryse do commentary, or at least Miz is, and despite the haters, he’s pretty good not only adding some analysis, but putting over both opponents and trying to tie himself into the “New Era.” Perhaps the best part is Miz’s rant about the “Rematch Clause” and the statute of limitations of this ridiculous trope.

A good hard hitting match including an Owens frog splash onto Cesaro from the apron to the outside and a running uppercut by Cesaro on the outside. Owens tries to use the title to hit Cesaro, gets stopped, and Cesaro gives Miz an uppercut. Miz breaks up the Cesaro Swing for the DQ and the heel beatdown is temporary as Sami Zayn comes in and cleans house, raising the belt to the delight of fans.

Stephanie wants to be on the Ambrose Asylum to do an Ask Me Anything. Reddit collectively weeps.

Comedy with R-Truth and Tyler Breeze

R-Truth’s tolerance for being made to look stupid is higher than the average WWE Superstar. Here, he’s using a real stick instead of a selfie stick and thinks Babe Ruth shot Abraham Lincoln. The progressive comedy of Vince McMahon, ladies and gentlemen. Goldust is jealous of the Breeze pairing for some strange reason, so he and Breeze are going to have a match. Goldust has a partner too, he and Fandango dance.

AJ and Les Boulez chat. There’s no way Roman leaves Extreme Rules as champion, and hey, Roman’s just happens to be eavesdropping. Kind of creepy there, Roman. Oh, and now Roman has respect for AJ but not this flackeys (tm Rob McCarron). AJ is going to take the title one on one, but tonight, we’re getting AJ/Gallows/Anderson and the Usos/Roman.

I hate this program but the players involved seem to be having a blast, especially Fandango and I kind of like how this “partners” angle is escalating. Rhodes is the perfect patsy as well. Goldust gets distracted by a Fandango/R-Truth danceoff and the dreaded Unbreakable Schoolboy of Doom by Breeze gets the pin.

Awwwww…St. Louis! They’re showing the damn concussion AGAIN? So the Vaudevillains won, but the New Day has a tweet to put a smile on our faces. Enzo, out of the hospital. The Vaudevillains are here and they’re real men. Enzo sings again, so the gimmick’s dead. Gotch with the line “We made Enzo the realest guy in the emergency room…” and for some reason, the Dudleys are here. Bubba calls the Vaudevillains carnies, saying they didn’t beat anyone last night and we need to restart this tournament. Cass is here solo. This is pissed Cass, and it’s not bad until he has to get to the catchphrase but he enters the ring and starts on the Vaudevillains with no other cuteness, so he’s forgiven. A brawl breaks out, to no one’s surprise. Not bad, but this is the usual multi-man or multi-team trope of stand around and talk until it breaks down. It’s very old era.

Stephanie and Shane made a match on the WWE Facebook page. So I have to have a second screen experience to follow a 3+ hour show? The Dudleys trash the Vaudevillains throughout the match, and Bubba continues to up his vocalizing game. A two segment House Show style match but nothing that necessarily stood out. Big Cass gets some nice shine on the hot tag, cleaning house and gets the pin with the East River Crossing on D-Von after Kofi thwarts a 3-D. Nice little showcase for Cass once the hot tag is made.

The Nattie vs Charlotte rematch gets recapped with a sweet Charles Robinson highlight package. The angle isn’t good, but Li’l Naitch is money.

A MATCH TOO BIG FOR PAYBACK!!! Steampunk Becky and Evil Emma – Let’s recap that this feud is mostly on Twitter BECAUSE RAW CAN’T HANDLE THIS GREATNESS! I swear Becky’s trying to get Emma to laugh pre-match, which is adorable, and then we get to the hard hitting stuff. This…this is what the women’s division needs on a regular basis, because the crowds need conditioning. Emma gets the victory after an eyepoke and a Michinoku Driver. I’m hoping this builds Emma and these losses eventually turn into something “new” for Becky’s character. Both deserved better from the crowd and a vibrant women’s division with more than one feud can only help make this roster more interesting.

The Colons are Puerto Rican, and this week we get to see all the carbs they shouldn’t be eating if they wish to maintain cosmetically pleasing bodies.

Ambrose trolls Stephanie with questions about Wrestlemania, Shane, and sacrificing family time for her own career. Stephanie gets mad and cancels Dean’s show, bringing back Chris Jericho and the Highlight Reel. The two cross paths, fight and Dean gets a Codebreaker and breaks Mitch (the plant) over Ambrose’s head.

Battle Royale to be #1 Contender to United States Championship

Titus O’Neil is back! Sheamus gets an entrance. Baron Corbin does too, Kalisto struggles on commentary, and to make matters worse the commentary team tries to help him as he stumbles, making it a further mess. The new stars in Corbin and Apollo Crews get eliminated fairly early, because who needs win streaks with a strong branding mechanism. In the end we get the former “Lads” and Zack Ryder as the final four, which after an initial Ryder beatdown becomes the League of Nations turning on each other much like we saw Smackdown. Ryder gets the hope spot, and the crowd wants it, but Rusev is here to put a stop to such nonsense and gets the win. Lana comes down to celebrate.

Li’l Naitch was paid off. Nattie comes down, slaps Ric and puts him in a Sharpshooter. Nattie then takes Flair’s Rolex, Hall of Fame Ring and sportscoat. At least it’s not farting. When the Flairs get backstage, Stephanie sets up a submission match at Extreme Rules, and Ric’s banned from ringside. Stephanie’s a problematic character in that they are being purposefully inconsistent with the writing and motivations of the character, having her heel on Ambrose while giving the illusion of being an even handed babyface authority figure with the Flairs. I’m guessing this is to emphasize her being two faced, but if it’s supposed to be a false veneer that Shane will eventually buy into only to get screwed later, you can’t put segments like the Ambrose one on this early, lest you tip your hand to the audience. Let her act like the phony babyface to lull Shane into complacency and then pull the rug out.

We get our first “Too Sweet Me, Bro” from the Bullet Club alumni. WWE is doing a good job here of keeping Styles a face and Anderson & Gallows heels. The match breaks down into controlled chaos with Gallows and Anderson hitting the double team boot on Reigns on the outside as Styles hits a Phenomenal Forearm on Jey for the pin in the ring. Gallows and Anderson then try to get Styles to hit Reigns with a chair post-match and Styles refuses. The Usos nail AJ with a chair to repay the kindness. AJ starts swinging the chair on the Usos and gets a Superman Punch from Roman after putting the chair down. Commentary sells hard that Reigns is mad at seeing AJ attack Roman’s family. Reigns continues a post-match beatdown on Styles. Reigns does a release powerbomb onto Styles through the broadcast table.

Overall Verdict: Kalisto is the only person from Payback getting a new dance partner, and even that is another David/Goliath story but with a new “Ryback,” Everything else on the card is rematches. This means the builds aren’t going to be any different from the past month or so with attacks, commentary and 50-50 booking. The good news is you’re still going to get solid matches in the meantime, but your heat builds will be reserved for AJ/Styles and Steph/Shane. 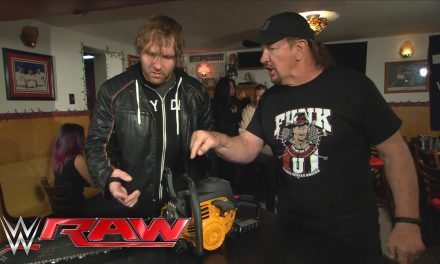