WWE Main Event is surprisingly decent this week. Every match is watchable and there’s certain to be at least a couple of guys you like.

The appeal of Kalisto’s style is that he can work his typical match against absolutely anyone and make it entertaining. He’s so damn good that he could do incredible stuff when wrestling in PWG or with certain guys in WWE, but also put on exciting bouts with nobodies. His banishment to the pre-show and opening matches may seem like a bad thing, but there’s no denying that Kalisto knows how to amp up a crowd. Even against Slater, he looks incredibly impressive. It makes me really want him to have matches with people that can accentuate his style. The brief few moments he was in the ring with Cesaro during a tag match was magical, and a singles match between them would undoubtedly be glorious. Since winning the US Title at the start of the year, he’s defended it against two people on PPVs and major shows. Both feuds were lackluster (although his Payback match was unexpectedly great). He’s stuck fighting Ryback and the Social Outcasts when matches with Cesaro, Zayn, Breeze and more await. Kalisto kickflips off Axel to deliver Salida Del Sol to Slater for the win. Very watchable match, but the Social Outcasts continue to bore in-ring.

Bo issues an open challenge after the Outcasts’ bickering really ‘flips his omelette’. Crews comes out all happy to be here and whatnot. I know that’s pretty much his only character trait, but how long will it take before his eyes glaze over and his face turns expressionless as he turns up on Main Event every week? If you get called up and don’t appear on the next PPV, WWE has already decided a place for you, and it isn’t at the top of the card. Crews is potentially a world champion level talent, but there are early onset signs showing that WWE couldn’t care less. His time in NXT for example was particularly head scratching. Why’d he have to lose to Finn so much? Why’d he never go through any character development? Why didn’t they wait until his mic skills were improved? Dragon Gate put on such a satisfying farewell show for him, but now I want him to go home. Either way, he’s adding some excitement to the midcard for the time being. Bo Dallas and his one kneepad don’t put up much of a fight, and Apollo picks up the easy win with the Spin-Out Powerbomb.

This match has happened A LOT. Every Ziggler vs Owens match kinda blends into one for me, and the amalgamation looks mediocre in my memory. I remember it was really exciting when they locked up for the first time because  Owens had so many fresh match ups that they could start with one that was sure to be good right away. And it was good, but not great.

Owens has the perfect gimmick when it comes to half-assing these shows. He does his normal rolling out of the ring and ‘best headlock in the world’ stuff which is funny, but then Dolph has been in a headlock for five minutes and it gets a tiny bit boring. Kevin becomes enraged and insulted when Ziggler finally breaks out and just kind of does a picture perfect frog splash. He can wrestle, he just chooses not to. Owens gets the win with the Pop Up Powerbomb. 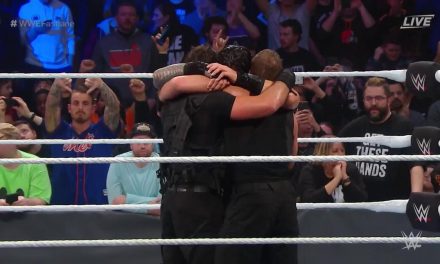