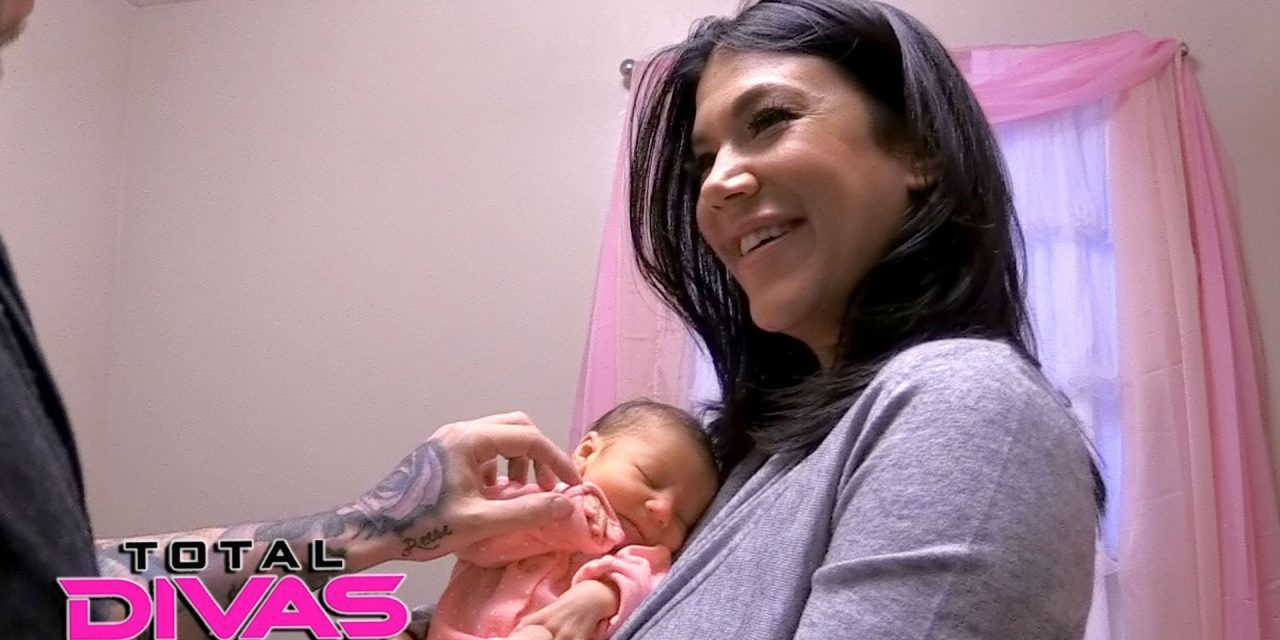 The two-part season finale of Total Divas aired Tuesday evening, and for once the cliffhanger ending came with a question to which we actually do not know the answer: What is Nikki Bella’s future with the WWE?

Before we can get to that, though, we have to wrap up the messy and unnecessary trip to Paris that was set up during last week’s Part One. When we left our various heroines, Mandy Rose had been ditched by Eva Marie and Natalya in favor of a fancy dinner out with the Bella Twins, and the ragtag group of lovable soon-to-be-written-off-the-show misfits making up the rest of the group had rallied round her with positive affirmations.

While Mandy lives out her middle school field trip drama, rambling about “people’s true colors” and whose behavior does and doesn’t surprise her, the Bellas, Nattie and Eva pause on their way home from dinner to make wishes on the Eiffel Tower (which they decide is a thing). Their wishes cover a broad range of probability and foreshadowing; Nikki, for example, wishes for John Cena to propose (a thing that seems like it could potentially happen maybe someday), while Brie wishes for Mr. Bella, Bryan “Daniel Bryan” Danielson, to be cleared to wrestle, which of course we all know is not going to happen for him, at least not in the WWE.

Later, Nattie makes nice to Mandy with a makeover and girl talk, during which Alicia Fox overhears Nattie say she doesn’t want to do some photo shoot that Foxy has set up. Fox gets mad because Nattie is being nice to her about it to her face, which seems totally reasonable — like, what a bitch to play along with a friend’s dumb idea even when you think it’s a dumb idea, am I right? Eye-roll emoji, shrug emoji, girl making an X with her arms emoji.

Anyway, after that there’s a big confrontation with everyone, with all kinds of “I feel” statements and talking over one another and weird semi-apologies.

“I think that’s the moral of the story, is, like, everybody should just kind of, like, talk to each other,” Eva somehow manages to articulate.

Eva then takes her own advice and catches Mandy alone for a long, agonizing non-apology apology conversation during which lots of platitudes are voiced while really essentially nothing is forgiven.

If you’ve ever wondered how frenemies come to be, well, there you go.

The exchange at least resets the group back to its normal level of friendly dysfunction and effectively wraps up Mandy and Foxy’s respective tenures as Total Divas cast members.

Speaking of characters who won’t be back next season, there’s one more matter to attend to in Paris: an argument between Rosa Mendes and her freshly-minted, still-awkward fiancé, Bobby. As is frequently the case with Bobby and Rosa, the argument has to do with religion; this time, it’s over Rosa’s desire to get married in a religious ceremony. Bobby would rather get both his arms cut off than be married by a minister (no, really, he says this), so he suggests they “meet in the middle.”

Bobby ends up telling Rosa to “just focus on (the ring),” which is F-minus marriage prep advice. She’s not going to be having this argument with the ring for the rest of her life, although the diamond is big enough that if the stone is of decent quality, it could probably pay for a good divorce attorney.

Fast forward two months. (This time jump is indicated by a title card warning us it’s now “two months later,” although considering how profoundly cocked up the entire timeline has been all season, WTF does that even mean?) Baby Jordan has been born! In… Pittsburgh. Where Bobby and Rosa have moved in with Bobby’s parents. (They imply they’re visiting, but they’re clearly moved into a bedroom and have a fully decorated nursery, so clearly this is some kind of long-term arrangement.)

Rosa is struggling with feeling like she doesn’t know what she’s doing, which squares with my own experience as a first-time parent, but her situation is complicated by the fact that she can’t call her mom for advice.

You see, apparently Bobby and Rosa resolved their religion argument by deciding that they will let Jordan choose religion for herself when she gets older, which is basically the plot of Are You There God? It’s Me, Margaret, so good luck to Jordan. The announcement of this non-Judy-Blume-endorsed parenting decision reportedly prompted Rosa’s very Christian mother to advise Rosa to warn Jordan that she would “burn in hell” if she chose incorrectly, after which Rosa and her mother stopped speaking. Bobby is appropriately outraged that Rosa’s mother has chosen devotion to Jesus over a relationship with a grandchild who isn’t even old enough to hold her head up, let alone reject Satan and embrace eternal life in Christ or whatever it is Rosa’s mom wants the baby to do.

“At some point, she’s gotta step up and be a mom,” Bobby says, reasonably.

Then they decide to raise Jordan in Pittsburgh, close to Bobby’s family, thus closing the door on Rosa’s term as a Total Divas cast member and, as far as the E! Network is concerned, living happily ever after, I guess. Good for them.

Back to actual wrestlers.

Nikki, as you likely know, is still on the injured list two months after Paris (obviously, since she’s still on the injured list today; doctors wouldn’t even clear her to stand by the ring during the Divas tag match at WrestleMania, just in case she got caught by an errant bump). In a series of scenes during which she appears more human than she ever has in any other context, Nikki gets emotional every time she has to talk about her injury.

“I feel like shit every day,” she explains, “Imagine if your spinal cord had a sinus infection and you had a hangover on top of it.”

She calls Brie after an MRI to report that the bulge in her neck has become a herniated disc that’s pushing on her spinal cord. Brie, typically semi-sensitive, expresses how relieved she is that Nikki was “able to walk out of the ring,” and then goes on to comment that it’s “crazy that I’m the strongest one standing between you, John and Bryan.”

Nikki then breaks down in front of Mama Bella:

Nikki travels to a Raw taping, where the twins will meet with Corporate Deus Ex Machina Mark Carrano to review the results of Nikki’s MRI and her status with the company. On the way, she gets a telephonic pep talk from John Cena, human motivational speech.

“Your priority should be to get pain-free.” Cena lectures her. “For once, why don’t you worry about taking care of you?”

No surprise, Carrano is the bearer of bad news. As far as WWE is concerned, Nikki is too injured to even think about coming back to work. Brie asks the question on everyone’s mind: Does WWE consider Nikki’s injury to be potentially career-ending?

“You want a straightforward answer?” asks Carrano, who has never demonstrated that he’s capable of anything else when it comes to terrible news. “Absolutely. … This could be something that happens that Nicole’s worked her last match in the WWE.”

Afterward, Nikki and Brie wander backstage as Nikki confronts the existential dilemma presented by the potential end of her in-ring career.

“Honestly, what is Nikki Bella without wrestling?” she wonders aloud. “There is no Nikki Bella.”

“I feel like a lot of change is coming, sister,” Brie says.

She takes Nikki by the arm and walks away…

…as an awkwardly grinning Paul Heyman tries to sneak by the cameras.

This show is so great.

What’s next for the Bella Twins? We’ll find out in the fall… when TOTAL BELLAS hits the E! Network. If a promo that followed Tuesday’s Total Divas season finale is any indication, Total Bellas will be a six-episode arc of pro wrestling Perfect Strangers, starring Daniel Bryan Danielson as Balki Bartokomous and John Cena as a fancier, handsomer, more jacked Cousin Larry Appleton — plus two dogs, brother JJ and wife, and introducing JOHN EFFING LAURINAITIS, aka New Papa Bella. 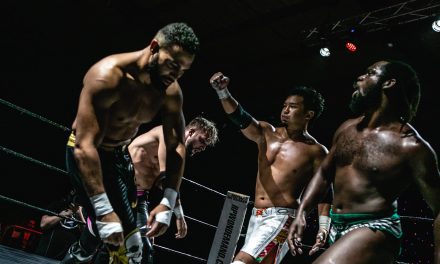 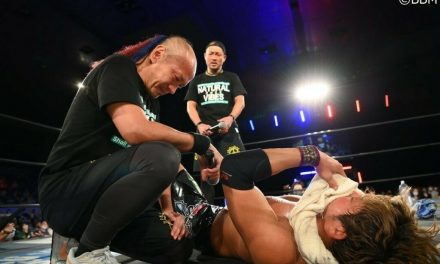