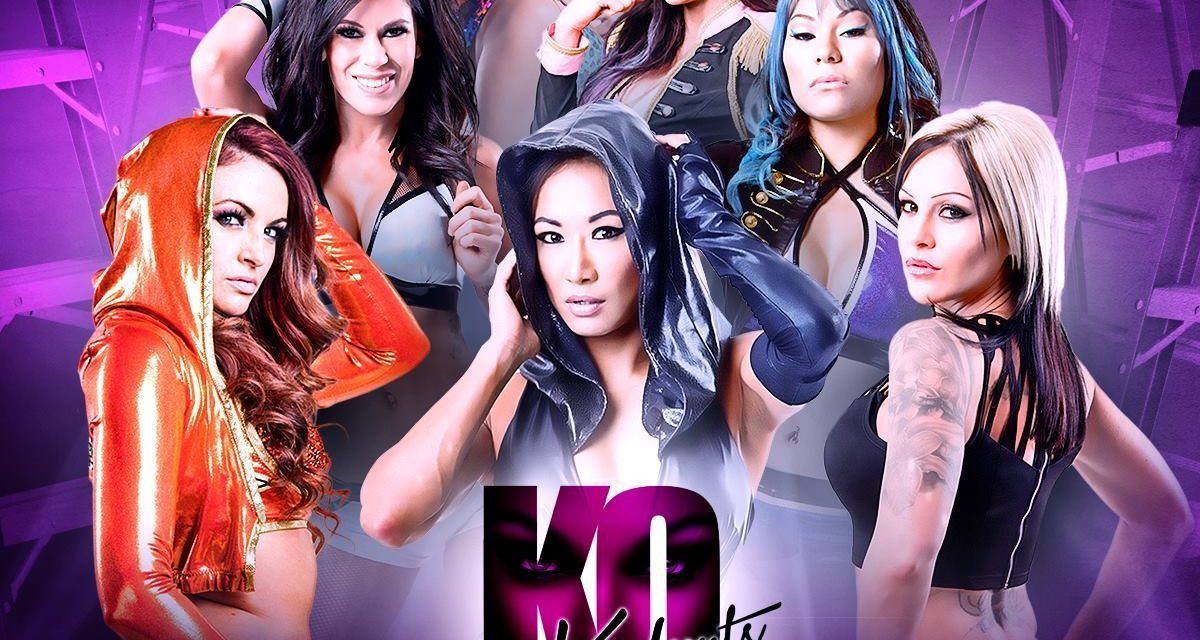 Maria hid out on the floor and ran away anytime she was confronted by Gail Kim. Kim finally got her hands on Maria but Decay kidnapped her. Marti Belle powerbombed Jade off a ladder. Maria took Velvet Sky out with a Kendo stick and climbed the ladder to become leader of the Knockouts. Solid ladder match and thankfully everything went fine even though the likes of Velvet Sky, Marti Belle and Rebel were in close proximity to ladders. **1/4

TNA World Champion Drew Galloway made his way to the ring with his ribs taped up because of the attack by Bobby Lashley last week. Drew said he’s not allowed to compete but he wants to fight Lashley. Spud came out instead. Spud rambled about Matt Hardy which irked Drew who threatened to beat up Spud. Tyrus then made his way to the ring. Tyrus said Drew was hiding behind his doctor’s note but Galloway agreed to wrestle Tyrus for the title no matter what next week. Spud and Tyrus then attacked Galloway’s ribs over and over again. Tyrus hit a Vader Bomb on a chair laid across Galloway’s ribs, leaving the question as to whether Galloway can overcome his serious injuries next week. I really hope this is an overcoming the odds story because there is nobody less equipped to be World champion in TNA than Tyrus. Simple solid storytelling though to give a Tyrus/Galloway match, which isn’t all that appealing on paper, something of a hook.

Nobody got an entrance. Shane Helms took out DJ Z with a clothesline. Andrew Everett made his return to TNA for the first time since Bound For Glory in October to take out Eddie Edwards giving Trevor Lee the win. Everett hit Edwards with a 630 Splash after the match. This was an enjoyable little sprint but it was the same old X-Division. These three got less time than Mahabali Shera and Al Snow did later in the show. It’s not even a case of asking the X-Division to get 20 minutes, give them 8 and they’d deliver something substantial. I’m a big fan of DJ Z but I never look forward to his matches on Impact because they’re always inconsequential 3-5 minute sprints. Lee, Edwards and DJ Z could have delivered something really great if TNA wanted them to, but they don’t. Lee, Everett and Helms are a new group now. **1/4

Eric Young and Bram came to the ring and ranted about TNA sucking up to the likes of EC3 and Galloway. Young said he was taking his title and he was leaving. Young then quit on behalf of himself and Bram. So Young’s character is fed up with TNA and just wants out. Bram didn’t seem on the same page. Bram said he wanted Young’s King of the Mountain title so Young kicked him in the nuts and laid him out with a Piledriver. Young decided he wasn’t done and grabbed some scissors. Young said he’s the only one allowed to have a beard and he cut the beard off of Bram. Is it weird that I would’ve totally been behind these two having a beard vs. beard match? So this means Bram is a babyface now I suppose. Both in the figurative wrestling sense and the literal beardless sense.

Maria and Mike Bennett were in the ring.  Bennett bragged about how he had made EC3’s life miserable. EC3 came out and gloated about beating up EC3 with a chair last week. Bennett said he beat EC3 (by DQ) and they will never wrestle again. EC3 said he’s beaten everybody, Angle, Sting, Hardy, Bully Ray, and challenged Bennett to beat him in a No DQ match. Bennett agreed and they will wrestle next week. Again, nice simple storytelling – the singles match that ended in a DQ leads to a No DQ match to determine who the fair and just winner would be. Problem is the first Bennett/EC3 match wasn’t really good enough to make me want to see another.

Snow beat the hell out of Shera for a while before Shera made a comeback. Snow cut Shera off and they worked another heat/comeback segment. Al Snow put some knux on his hand that looked like a load of tape and knocked Shera out for the win. There is absolutely no reason this needed to be as long as it was. Shera is barely equipped to wrestle in general, never mind a six minute singles match. It could’ve been worse I suppose but that this got more time than the X-Division match baffles me (though I suppose that’s what you get when you’re an agent). *

Decay made their way to the ring with the kidnapped Gail Kim. Gail Kim was abducted a good 80 or so minutes earlier in the show and yet nobody appears to have tried to find or help her. Decay attempted to use their kidnapping of Gail Kim as leverage to get a tag team title match. They got a title match for literally nothing last week, what are they trying so hard for? Ten years ago Gail Kim was James Storm’s manager in AMW but TNA never connected those dots (though AMW didn’t exactly end harmoniously). Gail Kim is also Canadian so I suppose that’s why Bobby Roode would want to save her. Roode and Storm agreed. So moral of the story – want something in TNA? Then kidnap somebody.

I Quit Match
Jeff Hardy vs. Matt Hardy – No Contest

They went back and forth for a while before Spud interfered. Jeff laid Spud out with a powerbomb and so began the plunder. Jeff tried a legdrop over the barricade but Matt threw a chair right in his face. Matt grabbed a pipe and tried to maim Jeff with it but Jeff escaped as they wandered into the production area. Matt tried to make Jeff quit with chair. Jeff slid down a rail and hit Matt with a chair. Matt hit Jeff with a Side Effect onto a guardrail but Jeff wouldn’t quit. Jeff choked Matt out on a table, then climbed to the top of some stairs and did a huge Swanton through the table. Nobody can ever accuse Jeff of not giving his all to TNA because that was crazy. TNA replayed the dive a load of times. Jeff got up and walked away. Matt was stretchered out. No winner was declared as Matt never said I Quit. This was a really fun stunt brawl, reminiscent of a lot of Hardy’s 2005 TNA output. With the no contest finish Matt can always come back and say that even with Jeff’s most insane efforts he still couldn’t put Matt away. ***1/4

If you only watch one thing from Impact this week, make sure to check out the main event, if only to see Jeff Hardy do crazy things. With more Impact tapings this week, I’m begging them to shoot for more high end content. Less three minute matches and more substantial content that might actually get people talking about the show. They’ve been doing a pretty solid, if frequently rushed, job of building up matches lately but those matches haven’t been given the opportunity to deliver to the level that they need to if Impact is to really get going again.