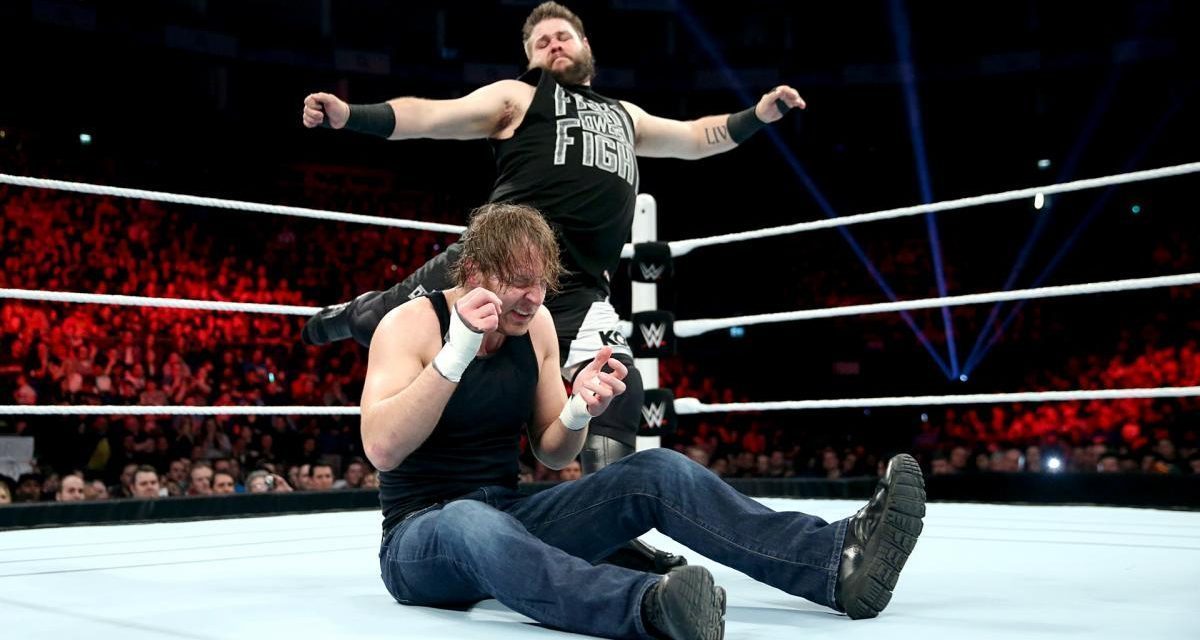 A Raw lacking a certain spark, given that they’re in front of what has historically been a rabid crowd in London. There was nothing bad on the show per se but the crowd treated it like filler, and that’s how it comes off.

Dean Ambrose and the Ambrose Asylum

Talk show feuds are always fun, right?  There’s something to be said that part of Shane McMahon’s new era initiatives is merely a new coat of paint over old format sheets. Cable Access Dean Ambrose is here and he’s doing bad jokes for the crowd.

Shane is the guest, wearing his best Eric Bischoff costume. Dean puts over the cage spot while conveniently avoiding that despite losing, Shane’s still in charge. Shane says his agenda is all about the fans and that “Superstars” who would have never gotten a chance are getting them.

Kevin Owens has a retort, saying this is the same old crap he’s seen for years: McMahons that are mad with power and carrying personal vendettas. It’s a shame part of this new era isn’t avoidance of comments that are so meta that they’re depressing. One would think Owens would be the character to point out the gaping logic hole that Shane’s regime should have no legitimacy. Owens notes Sami Zayn doesn’t belong near the title and has been riding Kevin’s coattails.

Zayn and Jericho both come out, the former reminding Owens about who got signed first, the latter’s sore about the Highlight Reel being cancelled.  Shane officially sets the matches for Payback between Owens/Zayn and Jericho/Ambrose then leaves. Dean gives Shane the plant, and the dance partners switch it up in a quick brawl before the heels bail.

Shane made this match on Facebook. Jericho wins clean after a Codebreaker.

Zayn played the great babyface in peril, Jericho’s was fine, but as a heel, and as an older performer, there’s something that looks sluggish when he’s doing aerial moves. It’s still impressive, but in a ring with Sami Zayn, it stands out. I kind of liked the callback to Kevin Owens using the same eyepoke to get an advantage for a pin. A subtle little nod to help build the feud even if Sami gets pinned relatively clean.

AJ Styles tries a promo and once again barely gets a word out before he’s interrupted. It’s the Harris Brothers and they’ve bought TNA! No, it’s Gallows and Anderson here to thank AJ, as he had enough stroke to get them into the WWE.

If you haven’t listened to the two Enzo and Cass interviews with Steve Austin (one on each of the feeds) they are well worth your time. Not only are they entertaining, but Enzo is very self-aware of his job in the ring—to get killed and make a hot tag.  The danger, of course, is to not be seen as a competent offensive force. Especially with a boss who likes tall guys.

Anger inducing moment as Cass had to be up immediately after a Dudley Death Drop II to get to the mistimed clothesline Bubba throws on Devon. That move used to be a finisher. I don’t blame Cass but rather the feeling they were crunched for time, which is preposterous given it’s a show that clocks in at over three hours. But they meticulously plot out the breaks, I suppose they had to be out so Roman could be at top of the hour. But it’s another reason no one gets all that emotionally involved in the product, the formula is there and the audience is way ahead of them.

Fun short match, Enzo and Cass win with a rocket launcher and the crowd loves them.

Roman Reigns’ demeanor just screams “douche,” and if he doesn’t go heel at Payback, it’s never happening. I have doubts because I get the feeling that the WWE thinks this is his lone wolf demeanor more than any lack of connection. This promo is more of the “you’ve been a champ but not here” angle. He’s going to hit these new era types in the mouth. I wonder how Shane feels about that.

Although in a comical moment it sounds like he then says the “error of the Roman Empire has begun.” Of course it’s “era.”

AJ is here to put over Roman on the microphone as damage control. The crowd is not agreeing. Roman “feels” everything AJ just said. All of the feels. This crowd sees right through this.

Commentary tries to put over the “big fight” feel, but …HOLD ON…Gallows and Anderson beat on Reigns. AJ looks a bit dismayed at this turn of events.

Here’s where “Old School Jeff” gets a bit cranky.

After commercial, Roman is shown backstage walking like nothing happened. Stars can’t be hurt? Babyfaces never got sympathy after being beat down? Dusty Rhodes disagrees. At least be angry. Therein lies part of the problem, as Roman thinks AJ is on it and doesn’t get angry, but instead acts like it’s no big deal. This is not the time to be a cool in control badass, the people want to see the fire and not the contrived in-match fire when he cocks his fist. Go for the guy’s throat! Don’t just swallow it and say a slogan that’s on a t-shirt.

Fandango finally gets to say hello to his fan club: Euros. Dolph is out to do commentary and put over Corbin as tough and tall. I think he says “you can’t teach that” at some point. Fandango chops the crap out of Corbin for the first thirty seconds, then it’s all Corbin being a bully. Fandango gets sent over the table and into Ziggler. Corbin with an easy End of Days for the win then Ziggler tries a post-match attack to eat a boot in the ring and an End of Days on the outside. Stupid babyface Ziggler.

Miz and Maryse are out for another talk show. I like Maryse. I like this pair. Talk shows just feel so stale and overdone. In the 80’s they at least had the decency to dress up a set and make each show seem like it had personality. These are chairs, a tv and stilted dialogue. Miz does his best Jimmy Garvin, making out with his wife. Cesaro is out as a sharp dressed man. It all fits together. Cesaro too has bad jokes. Miz has prepared a monologue from “Taken” Cesaro goes with “They Live.” I’m supposed to believe men will fight over movie quotes when everyone knows men bond over pop culture oneupsmanship. Seriously, I’ve had entire conversations referencing nothing but “The Simpsons.”

They tease a fight, but Miz informs Cesaro that he has a match with Rusev. Not quite, as it turns out Shane McMahon has changed it to an eight man, as the Lads and the Miz are going to fight Cesaro and the New Day

Awwwww London! A basic by the book eight man match that plays a lot of the hits, and the crowd’s enthusiasm post-New Day entrance faded fast. Cesaro gets the pin with the Neutralizer on Sheamus, building him up as a threat to beat Miz. Perfectly fine background noise.

Enjoyed this more than the other 8 person tag, but doing two in a row reeked of “trying to get everyone out there” and really wore down interest. Dare I say it was quite fun to see them get some time. The match flows smooth, and everyone gets to shine a bit. The point of the match was to get Nattie and the sharpshooter as a threat to take Charlotte’s title and it did its job as Charlotte taps quickly. It was announced that Bret Hart will be at Payback to counteract Ric Flair, recreating the NXT match atmosphere that helped make Charlotte. In Full Sail, a much improved Charlotte with Nattie and their two famous seconds would be hot. I have doubts two years later.

I’m probably in the minority here in overvaluing this match. I really liked the story of the match and it is a great debut for English and Gotch. In the presentation, they are a goofy gimmick containing a vicious mean streak. Why isn’t commentary putting this over more? There are lots of knees and lots of forearms from both here. The story is the Vaudevillains working on Jey’s shoulder as if they were the Revival. It is a strong win that gave them credibility, and to me, probably the best in-ring RAW debut of any of the call ups from NXT. They need help from commentary to really get them over, something to the effect of the theatrics hiding something more sinister.

I have doubts that the main roster final four teams will recreate the energy, chemistry and passion that the NXT teams had for the Dusty Classic. I am certain Cass/Enzo and the Vaudevillains are going to try, seeing as this will be their first big WWE event.

On the RAW Pre-Show, the Social Outcasts tried to recruit Apollo Crews to replace Wellness Outcast Adam Rose. The stipulation of the match is if one of them beats Crews, he joins. If not, they never bother Crews again. Slater is, as usual, great being a heel and flying for Crews, talking trash the entire way. There is a nice tease of Slater stealing the pin late, but this one is academic.

Crews has the obvious physical prowess, but the “happy to be here and somewhat overcome by the entrance” shtick isn’t going to fly as a character without a promo or two. The WWE Network ran ten weeks of programming that made Crews out to be one of the most likable people in the company. Just do a Breaking Ground montage of him with his family, on the road, etc. I can hear Les Thatcher screaming “Personality Profile” in my head but it rings true.  I have my own thoughts of what they’re trying to do, and they don’t need to go overboard, they just need to tell the audience why it’s important that we’re watching this guy at this moment.

Kevin Owens’ music hits as Crews is walking back and they eyeball each other like crossing ships in the night. A sign of things to come?

Fine, but the crowd is dead for this match. Why shouldn’t they be? There’s no stipulation to make this important, and there’s no real feud here to generate any sort of heat. Plus it feels like we’ve watched every matchup at least five or six times before. Each match never really switches up offense because “people want to see the hits” so you get the same moves, people respond to the setup for finishers and finisher.  It’s a match that hits all the right spots. The crowd is waiting for the go home stretch.

Jericho hits a Codebreaker on Ambrose post-match and stares a hole into Ambrose’s soul to close the show out. 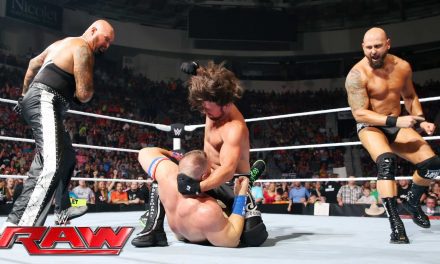