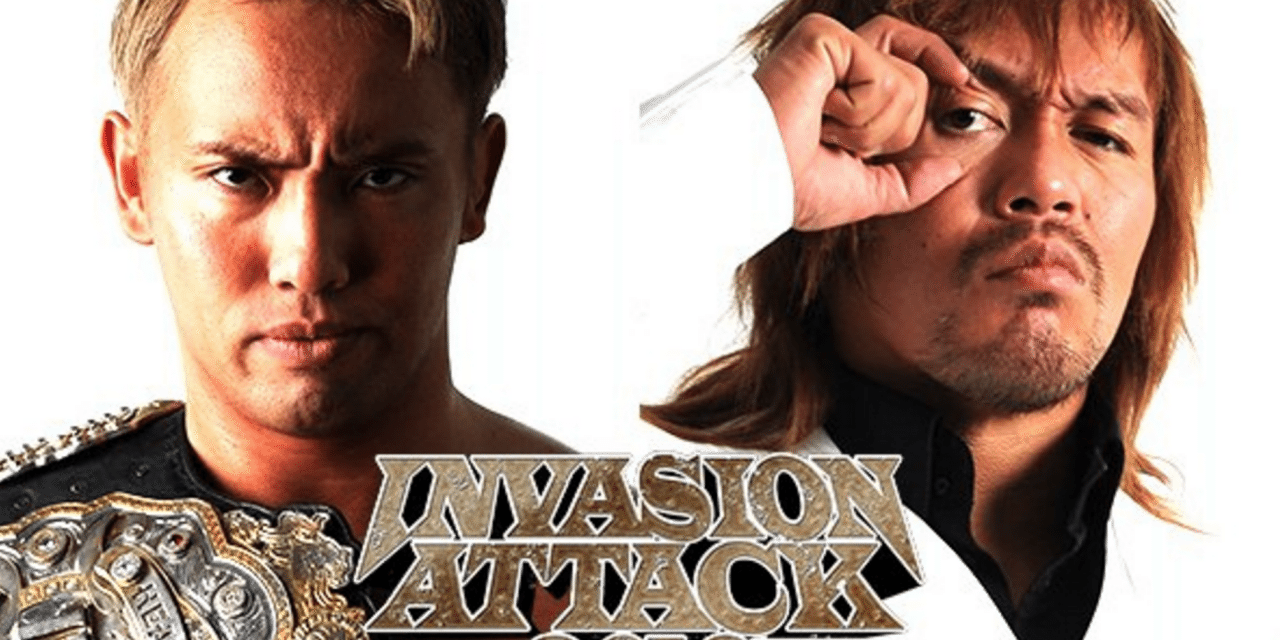 Whether you’re looking for something to wake up to on Sunday morning, or you’re trying to fill the Sunday night PPV void after an amazing WrestleMania weekend, we have one clear viewing recommendation for Sunday – NJPW’s Invasion Attack 2016.

While there are a number of championship matches on Sunday, the event has been built solidly around two major storylines. First, CHAOS’ leader and current IWGP Heavyweight Champion, Kazuchika Okada, takes on the challenge of the New Japan Cup 2016 winner and leader of Los Ingobernables de Japon, Tetsuya Naito. Plus, Bullet Club acts as both the hunted and the hunter at Invasion Attack – the ELITE look to defend their NEVER Openweight 6-Man titles, while a new member comes in to assist Tama Tonga in his hunt for the IWGP Heavyweight Tag titles. That new member just happens to be former Camacho in WWE, Tanga Rua.

Indeed, the entire Road to Invasion Attack tour really played up these major storylines. Bullet Club vs NJPW was the theme for a couple of the events, including one tour stop where NJPW won a Best of 5 series of singles matches against team Bullet Club. As for Okada, he was squared off against Naito in tag team action regularly on the tour, with both Los Ingobernables and CHOAS getting wins. Now, it’s 1 on 1. Who will be the IWGP Heavyweight Champion come Monday?

Unfamiliar with NJPW heading into Invasion Attack? Check out this 2016 Beginner’s Guide to NJPW!

The first match of the evening continues the NJPW vs Bullet Club theme, as Bad Luck Fale and Yujiro Takahashi take on Juice Robinson and Ryusuke Taguchi. If this seems a bit like a mismatch to you, you’re not a lone. Juice Robinson should absolutely be taking the fall here, which would give the Bullet Club the early lead in bragging rights here at Invasion Attack. Prediction: Bullet Club

Satoshi Kojima began the tour as a challenger to Katsoyori Shibata’s NEVER Openweight Championship, but he failed in his quest to win the title. Now, his tag partner, Hiroyoshi Tenzan, battles for the title on this PPV. That leaves Kojima out of the main mix, tagging with Nagata and Liger against three members of CHAOS. Could Yano be leading a new trios team up the ranks for the NEVER Openweight 6-Man titles with a victory here? Probably. Prediction: CHAOS

CHAOS newbie Hirooki Goto tags up with the ROH Television Champion to battle Team ALL CAPS. BUSHI is a junior heavyweight, but routinely gets paired up in these all heavyweight tags ever since failing to capture the IWGP Jr Heavyweight title. He plays the role well, and doesn’t generally seem out of place. Indeed, the sight I’m looking forward to most is BUSHI in there with Ishii for a lengthy stretch. The winners of the first of two CHAOS vs Los Ingobernables matches should be Goto and Ishii. Prediction: Ishii & Goto

Now we get to the really good stuff. A string of title matches that will set NJPW’s course leading up to Dominion in June. There are a lot of questions with this first title match, especially around rumors of Ricochet possibly leaving the independent scene to work with WWE in NXT. Also, will Matt Sydal go back into the Jr Heavyweight singles division, or remain a tag team competitor? Obviously, this match won’t answer every question we have, but the speculation could certainly rise either way.

Basically, if we’re to believe Ricochet is going to leave NJPW, Lucha Underground, and everywhere else to join WWE, he probably loses the tag straps here. In theory, they could go one more month and lose at Wrestling Dontaku, but after the January that NJPW had, I don’t think they’d risk the uncertainty. As for story, leaving outside factors out of it, Roppongi Vice came painfully close to the titles when they were held by reDRagon. If Beretta and Romero win, a rematch with reDRagon with the situation reversed would be super fun and interesting. Basically, whether real life factors or storyline factors are the ones we consider most heavily, I am feeling an RPG Vice victory. Prediction: Roppongi Vice

The rising UK standout, Will Ospreay, debuts in New Japan Pro Wrestling with an immediate opportunity at the Jr Heavyweight title. Also the newest member of CHAOS, Ospreay looks to capitalize on a star-making WrestleMania 32 weekend by taking home KUSHIDA’s Jr Heavyweight title. The push behind Ospreay is interesting – He’s coming in with Okada’s endorsement, a huge thing for a rookie with relatively little mainstream name. Plus, he has reportedly signed a contract with the group already, keeping him out of WWE’s upcoming Global Cruiserweight Series. All of those factors, plus the key in-ring factor of wanting to liven up the Jr Heavyweight singles division again, point to a Will Ospreay win. With NJPW announcing the J-Cup return for later this year, Ospreay immediately makes his case for being the favorite later this summer, as well. Prediction: Will Ospreay

The newly christened “Bullet Club Hunter,” Yoshitatsu, makes his return after a lengthy absence seeking revenge on the Bullet Club. Of course, the man who actually put Yoshitatsu out with injury is no longer in the company – AJ Styles. Instead, Yoshitatsu is coming out to destroy the remaining members of Bullet Club, a sentiment he shared during his stint on commentary over Wrestle Kingdom week. Will he destroy BC in one night? No, not likely. What is likely, though, is his capturing of the NEVER 6-man titles. Omega has the IWGP Intercontinental title to defend and focus on, so his time as NEVER champ has already exceeding my expectations for length of reign. Plus, these titles are seemingly made to be thrown around. That’s part of the fun. A NEVER 6-man win just may keep Tanahashi out of the singles title picture in the near future, as well, so that’s a bonus for NJPW. Give Tana something to do without actually having to give him something to do, so attention can be spent getting the new top tier guys ready to lead NJPW into the next year. Prediction: Tanahashi & Elgin & Yoshitatsu

First thing’s first: There is no way Tenzan wins the NEVER title here. Not that the NEVER title is super prestigious or that Tenzan is a nobody, but that Shibata is destined for more important things this year and a big time singles loss to a washed up Tenzan isn’t the way to get Shibata to where he needs to be. What I do feel is likely, however, is this match delivering in the ring on Sunday. I anticipate a quality match, one with excitement and vigor despite Tenzan’s reduced speed and fluidity over the years. Frankly, it’ll be good, although coming after the NEVER 6-man match may be a tough break. After the loss, expect Tenzan to go back to undercard tags with Kojima. Perhaps we’ll get a TenCozy vs Tongas tag program later this year. Prediction: Katsoyori Shibata

Tanga Rua is the former Camacho from WWE, as well as the brother of Tama Tonga via adoption. Tama Tonga’s rise from Bullet Club fall boy to tag title contender has been a fun watch, and now we await Tonga getting the big win he has deserved for a while. Maybe even more frustrating than watching the young lions continue to suffer undercard losses despite being ready for more, Tonga’s slow… slow… slow… rise to some importance has been tough to stomach. For years, instead of Tonga getting a higher slot, Bullet Club saw new guys come in and take away the spotlight. Now, one of those guys was AJ Styles, who nobody is complaining about now. But Jeff Jarrett? Yujiro Takahashi? And even Kenny Omega came in and grabbed a higher spotlight, which again, has worked out well. All that is to say that Tonga has delivered when called upon, but always gets passed up. Now he gets a chance in a title match PPV semi-final. Sure, he’s doing it with another new member being called in, but at least this time, the new member is not being slotted ahead of him. Go Tonga! Prediction: G.O.D.

The big one – the culmination of a PPV abundant with championship matches. CHAOS leader Kazuchika Okada defends against Los Ingobernables’ Tetsuya Naito, the winner of the 2016 New Japan Cup. I must say I was surprised when Naito won the cup, and that this match was made so soon after Wrestle Kingdom at all. Naito’s title challenge could have been built up all the way to next year’s Wrestle Kingdom, and it would have been amazing. Of course, it is still amazing now, just a bit of a surprise. Naito has done so well for himself ever since his character shift, and the big title match has been not only well earned, but made even more necessary due to the exodus of AJ Styles and Shinsuke Nakamura to WWE.

No matter who wins here, I actually still believe Okada vs Naito will find a way to main event Wrestle Kingdom 11. So if I’m continuing on that train of thought, a Naito victory at Invasion Attack may be the best way to go. Sure, we just finished the Okada redemption story, so another one so soon may be a bit weird. However. we don’t have to go full redemption for Okada after a loss here. The simpler story, that the new Naito isn’t the same challenge as the old Naito, and Okada must find a way to change his strategies, could be the type that leads NJPW through to next January on a high note. Okada vs Naito – these two are destined to be NJPW’s big two for the next year.

My only question to can reduce my expectation of Naito vs Okada at next year’s big show is where Kenny Omega may fit in if he’s proven to have made himself into a top name with his Intercontinental title run. Can Omega work his way into the Heavyweight title picture? I’m not sure he needs to this year, but you never know.

With all this running through my mind, I still have to pick a winner. Like I said, no matter who wins, the main event for Wrestle Kingdom could still be Naito vs Okada. So, either way, these two shouldn’t face off again until then. If Naito were to win, Okada in a more immediate rematch would seem likely, no? Possibly at Dominion. While an Okada win would realistically force Naito to win the G1 Climax to get his rematch. That’s a very likely scenario.

So… BET HEDGING TIME! While I feel the likeliest scenario to keep my WK prediction alive is an Okada win, I’m going to go against my gut George Costanza-style and wonder what would happen here if my WK plans aren’t even close to accurate. Prediction: Tetsuya Naito 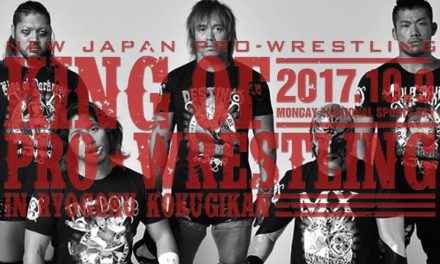 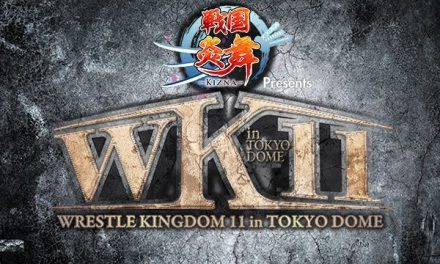