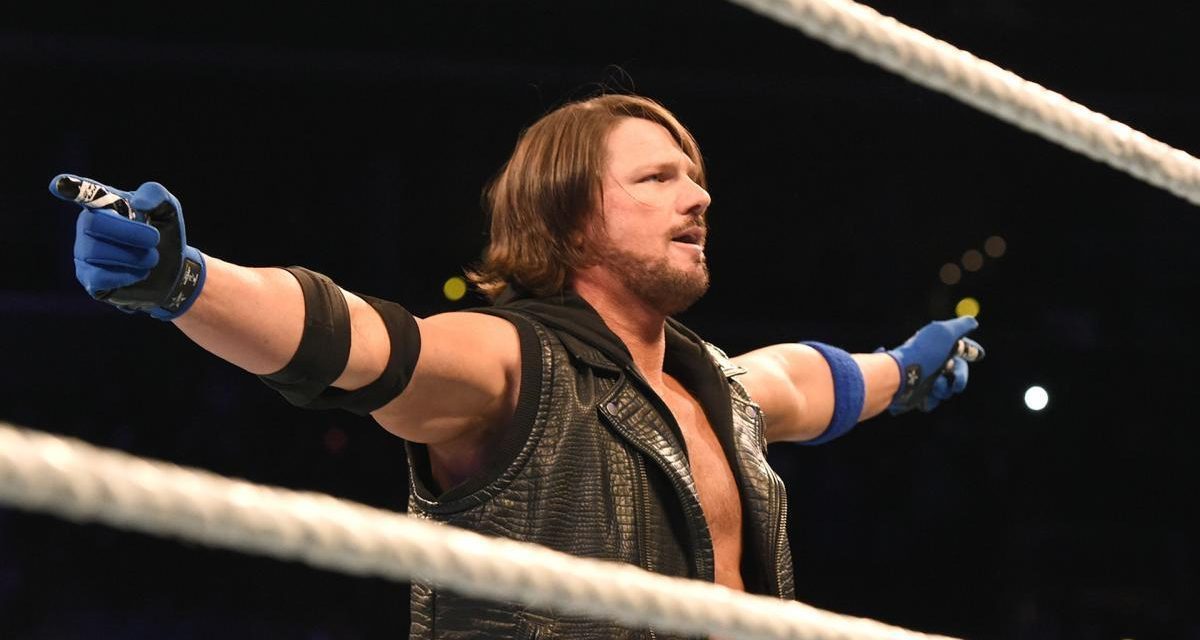 This is an awkward SmackDown with three matches jammed in the taping before Monday’s RAW: a length of recording that left the crowd so lethargic they were reduced to trash-chanting over a match with Kevin Owens and Sami Zayn in it. It’s a ramshackle collection of odds and ends of interminable video packages, pre-show type discussion bumf, and only the ghost of the pretence that the matches have consequences to Mania.

As if to amplify that real C-show vibe you get from stuff recorded before RAW, the Social Outcasts open the show, still firmly dedicated to their poorly-drafted plan to somehow win the Andre the Giant Memorial Battle Royale collectively. Here, the crux of their argument is that they are superior to AJ Styles because he is merely a phenomenal one, and the Outcasts have power in friendship. Methinks the mongoose doth protest too much, though: if you look closely, the cracks are beginning to show amongst the misfits. On Main Event a while back Axel had a full-on breakdown over memories of his former best BFF forever Ryback, so while power may be in numbers, it’s clear that some hearts are elsewhere.

I like Styles vs Slater the same way I like Styles vs Breeze: the way that wrestling someone in a generous way, relatively unhindered by oppressive ego can produce fun, chaotic sequences of flailing and dancing — and Styles looking unprecedentedly devastating with the minimum of effort. Slater manages to get in far more offence than Breeze was afforded though.

Lawler warbles that the 4th meet-up of Jericho and Styles, at Mania, might descend into one-upmanship; and he’s right. That’s what’s been frustrating about that series of matches. Jericho’s faded charisma, desperately clinging to the idea of having a match of the year candidate at this stage in his career, has produced a feud where “Y2 Jackass” and “you stupid idiot” insults are the height of drama between two middle-aged men, and matches that appear woefully self-indulgent. The best heels’ insults are based in truth, so when Jericho says “ya rookie” it doesn’t ring true for anyone with a brain.

The Outcasts stalk the outside. Axel looks more driven and unhinged than usual, yelling “Hows that feel?!” as Styles is briefly crushed under Heath’s boot in the corner.

“Inoki-micro-sushi” is what Lawler deigns to call the Ushigoroshi this week, with his levels of gleeful racism only matched by his resentment of Ranallo, to the extent he’s started using “Mauro” as a generic insult over on Main Event.

Styles dispatches an ominously apron-lurking Adam Rose with a blind pele kick, and then gets the win with the Phenomenal Forearm. Or, as Lawler decides to yell out impulsively, the “miso soup dropkick!”

“This man has sports entertainment in his heritage!”

Intermittently, Young and Saxton present from Dallas live, on a futuristic table flanked by two mesmerising vertical monitors looping endless SmackDown screensavers. In the copious amount of time the pair are given, they manage to say little of substance, so I’ll analyse the outfits for you instead. Renee has an unflattering scruffy high-bun; a vest top paired with a burberry jacket; two thin silver chain necklaces. It’s the kind of hairstyle you’d wear to the gym, when you’re going to a yoga class, make-up free and certain you won’t bump into anyone you’d want to impress. Byron is sporting a crucifix pendant with a daringly unbuttoned dress shirt, but his pocket square in his blazer is SmackDown blue, which makes him a clear victor for #bestdressed. The pair are an uncharismatic combination.

The Undertaker, apparently, is Vince McMahon’s bitch. None of the build for this particular match has been on SmackDown so there hasn’t been much opportunity to discuss it, but it’s been very telling the way the video packages perversely fixate on the phrase “his bitch”– the sexist language, the emasculation that is seen as the ultimate wham line. This show replays the Shane/Taker promo video several times so there’s a lot of chance to starkly hold it in comparison with the hype for the Divas’ title match also happening at Mania. If you’re explicitly saying that the worst thing you can be called is a misogynistic slur, the most shocking insult is to be compared to a woman, how does that create an environment for female talent to flourish on the same show?

It is pretty fun to see Shane’s wholly ridiculous elbow drop on Taker repeated ad infinitum in slow mo, though.

Is this the least interesting Mania match? Almost every other match on the card has some element of frisson or at least morbid curiosity. Bubba Ray steals opportunistic punches when Jey is thrown towards the edge of the ring, which the presumably severely myopic referee is oblivious to. D-Von gets the win with the RDS spinebuster.

A match between two men who both desperately look like they need to take a bath. Grasping for something to say about this match it occurs to me that the time since Erick Rowan was allowed a new personality trait stands at five months: on Halloween SmackDown we heard that Rowan was never allowed to wear spooky seasonal costumes as a child, presumably implying why as an adult he became smitten with Bray’s bayou clan when he realised that the overalls were complementary. I was eagerly speculating that this ostensible main event singles spot might prompt another breathless confession from our fave bearded vitner, but sadly Rowan remains tight lipped.

Ambrose appears a little lethargic here, but throws his signature spots with gusto and produces a series of facials that would rival Cleaner-era Kenny Omega. Rowan is allowed to look surprisingly strong, sweating profusely as he ambitiously mounts the turnbuckle, only to meet a bafflingly predictable superplex. It’s refreshing when bizarre singles matches get a little time. It feels like anything might be allowed to happen, even if just for a moment.

Ambrose gets the win with Dirty Deeds, but the unspoken implication hangs in the air like fog over the marsh: how will the Wyatts’ last month of listless stalking play into the Ambrose/Lesnar confrontation?