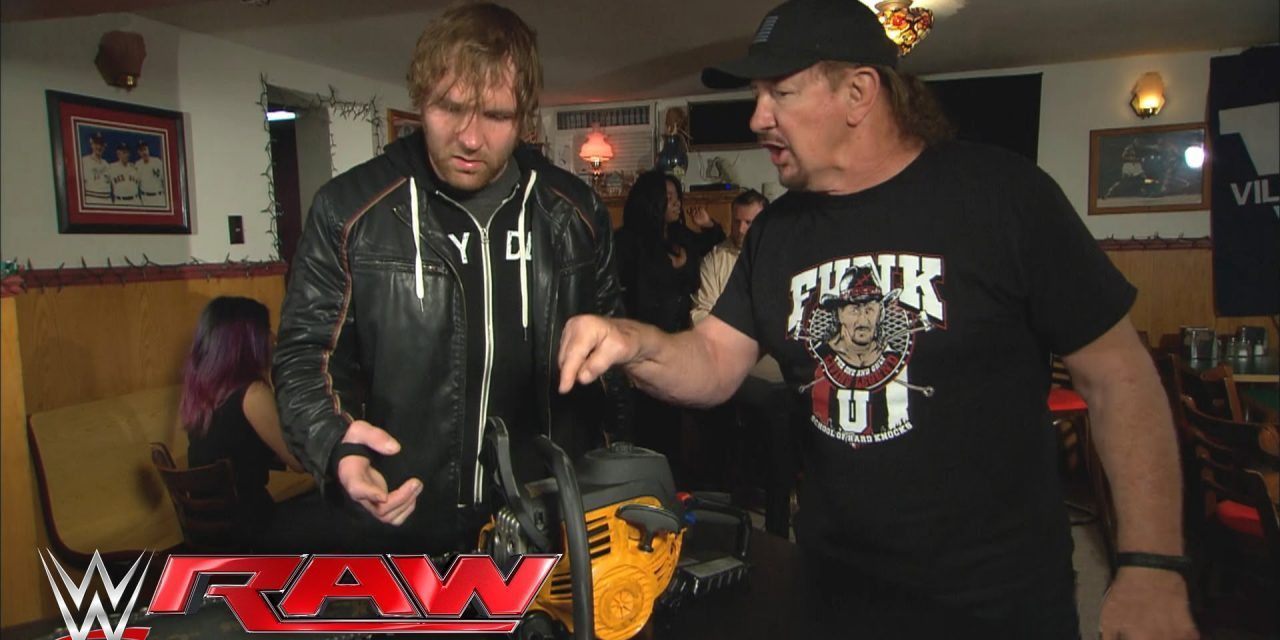 Overview: The build for KO Mania, featuring Kevin Owens, with cameos by Vince, Stephanie, Hunter and Roman. Two weeks until the biggest event of WWE’s year, WrestleMania 32. Which would have more steam, a separate KO Mania or WrestleMania 32?

3 Things to Watch if you DVR:

We are live from one of my favorite cities to visit, Philadelphia. The best thing I ever ate was at Village Whiskey (duck fat fries in cheddar beer sauce with braised short ribs). The best gelato in the country is across the street. I’m partial to Monk’s Belgian Sour Ale, Tria is a very nice bar and Tony Luke’s or any number of smaller joints is my choice in cheesesteaks, stay away from the Geno’s/Pat’s crossroads.

Stephanie McMahon gets to play TV star. HHH won’t be here, corporate responsibilities, not because of the beating Roman Reigns gave him. Roman will never be world champ, because like the crowd, he lacks intellect. Judging by the logic choices, I’m not sure Stephanie should be throwing rocks in that glass house.

Crowd is “what” ing, Stephanie is monologuing, and Roman is out…from the back again. Very slow, very methodical, taking it all in, which I’m guessing were stage notes. I wonder if this new entrance signifies there will be a change in character or that they don’t find him as special as before. Roman references Broad Street (cheap pop) and says he’ll be the Authority when he wins. Cerberus, Hydra, Kardashians, The Authority—cut off their heads and they just grow back.

So Roman’s a man of few words…two weeks before ‘Mania, which one would think is the “hard sell” period. Okay.

9/10ths of this is a great television match, and one of the best on RAW this year. If Kevin Owens isn’t MVP of the WWE, much like Seth Rollins of last year, he soon will be. Not a paint by numbers WWE match but more like a house show style match between the two. Even JBL notes they “opened up their arsenals.”  If they had promo time for a week or two with heat to match this would be the beginning of something really special. Hard hitting moves, numerous two counts. Michael Cole getting excited. It defies all expectations. My inner cynic forgets it’s probably just pandering to put two internet darlings in for a three segment match to begin the show.

….and then comes the 1/10th that wasn’t good. Chris Jericho strolls down to the ring chanting “AJ Styles.” Jericho distracts, Owens schoolboys AJ, I throw my hands in the air. I don’t mind if you pin AJ, just don’t make him a moron. How about Jericho nails AJ with a foreign object here? Build some hate?

If Donald Trump promises to outlaw the distraction that leads to a schoolboy, I may vote for him.

Kevin Owens cuts an enlivened promo about KO-Mania to which the response is Dolph Ziggler.

Kevin Owens, saying what we all thought: “You gotta be kidding me”

Dolph Ziggler drops a Botchamania reference, which probably went over Vince’s head, but then out comes Miz, it’s TalkaMania. The never properly introduced Sami Zayn is out to add to it, but at least it’s angry fired up Sami. The crowd loves Sami. Kevin wants none of it and leaves saying none of them deserve a title shot. He’s going to go to the Authority to set up a match where the winner gets to face him.

Dean is talking to someone off camera at a Philadelphia bar.  He turns the other way and Terry Funk is there. I love Terry Funk, Terry Funk is one of my favorite promos of all time, but not here. He rambles out a few weird metaphors and breaks out a chainsaw for Prop Comic Dean. Dean saws a table in half. Somewhere a South Jersey woman complains she can’t take her baby into a bar, but they’ll allow a chainsaw in the middle of the day. Gallagher then smashed a watermelon with a sledgehammer (not really).

Stephanie and Kevin Owens interact, and Stephanie emasculates KO. It’s in her contract she gets to do that once a show. Triple Threat later. Owens is fantastic as a suck up here to counterbalance the heat sink that is Stephanie. “Tell Hunter I said hi”

Legends react to Shane. WWE does great video packages. They should do them for guys who need more build, like Sami or AJ.

After a tease where the New Day make white people dance backstage, the League of Nations is out in the ring to start the segment.

Michael Cole: “They call themselves the Lads”

Me: “I might call myself the Sexiest Man Alive, it doesn’t make it true”

Angry Rusev is the best. Each “Lad” gets a turn to say they’re going to beat the New Day.

Awwwwww Philly! When amusing heels turn babyface, there tends to be two major issues—they forget how to be devious and their comedy loses all their bite, because instead of being mean and insulting they’re there to be crowd pleasing. New Day did some terrible comedy and the Lads no-sold it. I love the New Day, so when I say this was bad, this was bad.

Big E defeats Rusev with the Big Ending. Mean men doing mean things. Impressive show of strength at one point with Big E lifting Rusev on his shoulders. Lots of distractions. Big E almost kills himself with that spear to Sheamus.

The Wyatts talk in riddles. Paradise awaits you on the other side. The God of War watches over Braun tonight. Ares? Mars? Hermoor the War Spirit of ancient Norse mythology?

The ridiculously oversized Andre the Giant Memorial Battle Royal trophy is rebuilt, and out here to remind you that it’s a big deal, when we all know otherwise.

And Wellllll….it’s the Big Show. He’s won this event. “It can change the entire course of your career” it did wonders for him and Cesaro. The #SocialOutcasts are out doing what it is they do and then attack. Kane makes the save. It’s like that Philadelphia Royal Rumble from two years ago with the horrid booking! Show hugs Kane, celebrates, and Kane attacks because it’s a battle royale and “every man for himself” so nobody gets to be friends until this contrived event is over.

WrestleMania Rewind! Everyone’s nostalgic for this, right? AJ Styles tries to return the distraction favor from earlier and fails. Jericho wins with a codebreaker.

Wait. So the heel is smarter than the babyface, doesn’t get screwed by the babyface in return and this is the build? AJ, as gobsmacked by this lack of logic then punks out Jericho.

Kevin Owens is out here to do ring introductions for his triple threat…it’s Stardust!  Sin Cara! and Zack Ryder! Swerve! KO is great on commentary here. Honestly, not a bad little match for the time given. But Sami, Miz and Dolph all make their way down. KO throws Ryder into Miz for a disqualification (I thought one fall Triple Threats in the WWE were no DQ) and all of them beat on KO.

Stephanie has an uneven feeling about Roman, but KO is back for more emasculating. KO’s Eddie Haskell-like pandering saves this, he really is great. Stephanie is going to make him defend against all six guys.  Great for Zack Ryder, who has been with the company 10 years and while it’s not a one on one match, it’s an upgrade from “Pray for Mojo” Rawley. Bad in that if Daniel Bryan is any indication, either Sin Cara or Sami Zayn’s surgically repaired shoulders will not be too long for this world.

Stephanie’s SUV is here, HHH is in there to pick her up. They lied to us about those corporate responsibilities. A garage door manned by a security guard with absolutely no cares to give opens and GASP! IT’S ROMAN! Roman stalks the vehicle and pulls Hunter out to beat on him as Stephanie screeches. The slow garage door wasn’t nearly enough time to press the power locks. HHH throws Roman off and makes his escape.

Sasha and Becky are out for commentary, making it a five person booth, which is three too many. I’m pretty sure Kevin Dunn has an aneurysm every time Becky speaks. We’re reminded that Triple Threat matches are no disqualification or countout, when IT. JUST. HAPPENED. The horrid back and forth leads to exchanges such as:

Michael Cole:”Becky what are you going to do if you lose?”

I love Becky, but if she doesn’t have clever puns she’s absolute death trying to “entertain” instead of trying to be a “fighter.”

No entrance for Truth, so I don’t know “What’s Up.” Bubba calls him “boy” which makes me uncomfortable. Short ECW chant to start that this crowd just doesn’t have the heart to continue. It’s amazing how neutered Philadelphia crowds have become. Bubba talking a lot, and it’s pretty cool.  D-Von distracts, big boot from Bubba for the pin. Goldust comes out to make a save and he gets punked. How many stupid vignettes did we watch for THAT? The Usos are out, clear out Bubba, double superkick on D-Von, they get a table and tease a double splash, but stall enough for no one to believe they will do it. Bubba makes the save and denies the Philly fans the hardcore spot.

No Chance! Vince McMahon is out. His “former” son Shane is in Hell in the Cell, and if Shane wins, he’s running RAW and Steph and HHH would probably quit the business and it might be the last we see of Vince.

Shane will fight with every drop of blood and is Undertaker’s most formidable opponent. Completely deadpan, not ironic or played up in the least. Really? Undertaker is Vince’s weapon of destruction and his bitch. If Undertaker loses, it will be his last WrestleMania.

Okay, so there’s your finish: Undertaker kills Shane, but proves he’s nobody’s bitch and kills Vince. Either he lies down or someone helps Shane/Vince. Cliffhanger for next year with the possibility of reinstatement. It’s a completely unnecessary stipulation as Undertaker has already agreed to fight Shane and is already pissed at Shane for calling him Vince’s bitch. It would make sense if Undertaker had spurned Vince at first. The only thing this stipulation does is make Vince look like more of a jerk, which is superfluous. So you have two stipulations that either mean nothing or both have to be carried through. I’d bet the latter.

As Vince walks back, Dean’s music hits. Vince glances Dean over and thinks “not a main eventer”

Dean gets beat on, comes back, rinse, repeat. “This is boring” chant that fizzles. Vince McMahon broke Philadelphia. This, to me is the most unreal development of the past few years. On the penultimate RAW before WrestleMania 32, Vince has made what was formerly one of the hottest crowds on the schedule apathetic.

I’m crying at the thought that for my first out of town WrestleMania experience, I paid too much money to go to what will probably be the worst WrestleMania since WrestleMania IX.

Dean grabs a chair and attacks Strowman.  He then hits the Dirty Deeds on the chair on Strowman. Chekhov’s Chainsaw will have to wait.

Luke Harper apparently got hurt in the dark match after the cameras went off the air, meaning another one of the “good guys” is on the shelf.

Next Week: the go home show. Lots of McMahons. Do they hide their next big star for another week? Will Marie Antoinette give Dean a guillotine? 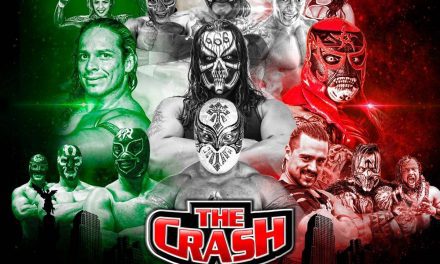