Well, so long Roman Reigns. The #1 seed out of the Brian Pillman Region has been defeated; Jay White, who secured his entry into the tournament by winning the First Eight vote, did the deed. Other notable first round upsets include current Dragon Gate Open the Dream Gate Champion, #4 Shingo Takagi, getting knocked off by #13 Young Bucks… much like fellow Dragon Gate star Jimmy Susumu, who was easily defeated by Minoru Suzuki’s Suzuki-gun. Three #1 seeds remain, with Okada, HHH, and Jay Lethal easily fighting off challenges to advance into the second round.

The field has narrowed to 32 of the best wrestlers of today – all by your votes. Voting begins on Round 2 right now, so head over to the VOW forums to select who you want to move on to the Sweet 16!

The Round of 32 features some very interesting matchups that shadow real life rivalries – #6 Sami Zayn vs #3 Kevin Owens for example. Two very popular former ROH stars, now wrestling at the highest stage in WWE, face off to see who will take on the winner of #7 Bayley vs #2 Brock Lesnar.

Over in the Pillman Region, current NJPW Jr Heavyweights, who made their name big on the independent scenes in the UK and US, face off in #5 Will Ospreay vs #4 Ricochet.

Want a clash of styles? (yes definitely pun intended) How about the #11 Sasha Banks matchup with #3 AJ Styles.

There are many interesting matchups, and the winners are all determined by you. So go vote! You can also discuss the matchups, snubs, surprises and more on the VOW Forums in the Match Madness section. Feel free to create topics, or put your thoughts on the main Match Madness topic here. Enjoy!

Go to the VOW Match Madness Forum, or click on the matchup to vote! 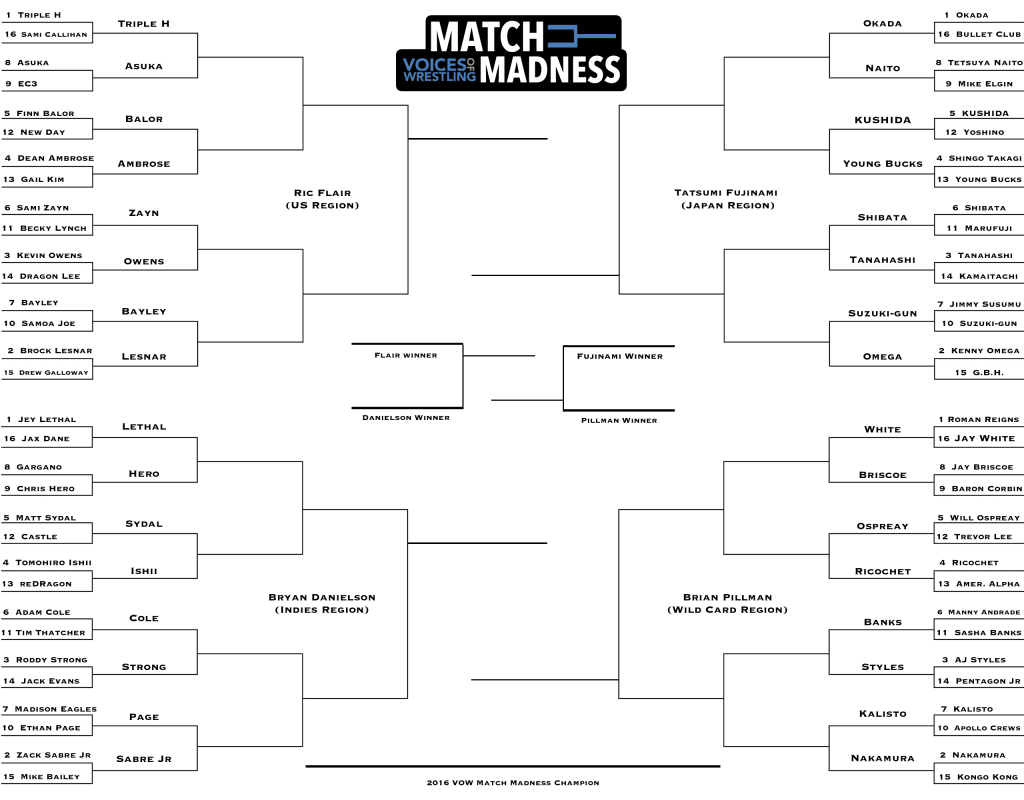