It’s free haircut night in Arena Mexico this Friday. CMLL has four of their biggest unmasked stars in two hair matches this week. It’s their annual Homenaje a Dos Leyendas (Tribute to Two Leyendas) show in Arena Mexico. CMLL’s March show is usually the second biggest of the year and the cards have included two apuesta (mask or hair on the line) matches, but the first match is usual a battle of midcard luchadors. This week’s card has two matches which could main event any show.

The event will air on iPPV via cleeng.com. The listed price is $10USD, but there’s $2 more added in fees. It appears to be a live only show with no video on demand option advertised. The big matches from the show should air in the US on Lucha Azteca on April 16 and will air on SamuraiTV in Japan at some point in the next month.

Homenaje a Dos Leyendas starts at 8:30pm Mexico City time, but that’s an hour later than normal in the US due to Daylight Savings Time changing last weekend. (Mexico doesn’t change until April.) It’s a bit confusing: check here for the time where you live.

It’s a six match show. Like most CMLL shows, there’s a number of undercard matches with no particular story to them, but they’re a better quality than usual.

Sansón and Cuatrero are the sons of perennial WON HOF candidate Cien Caras. They’ve been wrestling occasionally on indies in north central Mexico for a few years before starting in CMLL full time at the end of last year. Being included on a major CMLL show three months later is rather quick, and speaks about how highly they’re regarded; they’d both naturally end up near the top of shows based on their family and their six foot height, but they have the potential to be main event stars. They’re shown more in the ring than expected and are a good change of pace from a mostly veteran rudo midcard. Sansón is the slightly more natural one of the two, and his brother Cuatrero is the one with horseshoes on his gear.

Soberano’s a talented flyer who’s popular with young woman, but is stuck in the lower reaches of cards with limits on what he can do. Soberano being included would look like a vote of confidence, but the less promising Oro Jr. also being there reveals it’s more about finding young small guys who can lose impressively.

The Hijos del Infierno are currently Mexican National (secondary) Trios Champions, which has mostly meant occasional defenses against random assortments of upper midcard tecnicos. The three men on the other side are, in fact, random upper midcard tecnicos, but this is a non-title match just to get people on the card. It does mean they’ve had many similar type matches of late and they’ve generally been good. Mephisto and company are noticeably slowing down, but are good enough catchers to make this match still work. It won’t mean anything, but it still be entertaining in itself.

And now we’ve reached the portion of the card where there’s actual story the matches. Dragón Lee and Kamaitachi have been trying to kill each other and themselves for a year and a half now, with Lee winning the CMLL Lightweight Championship back in their last match. The rest of the Japanese contingent teams up with Kamaitachi in this one, taking on a foursome of Mexicans who are also CMLL champions. Dorada is the CMLL Welterweight Champion, and Mistico & Valiente share the CMLL Trios Championship with Volador Jr. A logical outcome would to be use this match to set up a title program for any of those belts, but it also might just be easy to have the patriots beat the evil foreigners.

That’s the future. This match itself should be great. Fujin and Raijin quickly adapted to CMLL and being rudos. Not everything has gone cleanly, but their effort and personality has shined through immediately and they’re be trusted with a good position on a big show. (It also might be an indication of a necessity to move quicker with them – they’re definitely on a big show quicker than Kamaitachi and Namajague before him.) They’re part of a good crew to work with here. 2016 Valiente isn’t the luchador he’s been in the past, but it’s a pretty good eight man when he’s the worst guy in it.

This feels like Kamaitacihi’s conclusion in CMLL, since he’s got nothing particular to do after this point – but he’s blown threw a few end points in the past, and is actually listed for an indie show on April 15.

Los Ingobernables have had either an uneasy relationship with the CMLL tecnicos or a badly booked one for the last couple years. Rush and friends would sometimes get along fine enough with guys like Maximo and sometimes spend the match turning. This made little sense from the outside, and the characters finally caught on in the last month: Maximo stood up to Rush’s bullying, and his old friend Marco Corleone quit the Ingobernables to defend him. The breakup appeared to set up a Rush & La Mascara vs Marco Corleone & Maximo tag program, but CMLL surprisingly went straight to a hair match instead.

This probably will be the most heated match of the night, and the more likely of the two big matches to get the desired reactions. Maximo is among the beloved tecnicos and one of the few who are certain to get cheered no matter the crowd make up, and Rush is loathed. Even the people who like Rush enjoy booing him. It also stands a good chance of being the best match of the night. Rush is great, and Maximo’s been in the best form of his career over the last twelve months. The one significant flaw is the outcome is not in any doubt. Rush isn’t likely to be losing his hair to anyone, but definitely not in the fourth match of a sixth match card. There’d be no point in going on – with this show, and maybe just life in general.

A straight up buffer match between the two main events with not a lot of purpose besides giving people a breather. It does also allow some of the bigger names to be wedged onto this card. Cibernético, ostensibly a guest from ELITE, makes his first appearance on one CMLL’s bigger shows. La Mascara would’ve made more sense to continue his issue with Marco, but he’ll probably find a way to get involved in the previous match. The outcome of this match is not important and it’s got the least chance of being good, but the antics of Porky, Niebla and others will get the usual good reaction from the crowd.

This is the culmination of a feud between two families. Negro Casas spend the end of last year feuding with fellow 50+ year old luchador Super Parka, who’s also the original Volador. Casas took Parka’s hair on New Year’s Day with a little help from his nephew Puma and a foul. Volador’s vowed to avenge his father. Casas has scraped out a few more wins against the Voladors by using a dreaded martinete (Tombstone) on Super Parka and with more outside help from Puma & Tiger. Volador’s teased bringing in a relative of his own to even the odds, but the obvious pick (uncle LA Park) seems to be on the outs with CMLL. Still, interference spots in CMLL are unusual enough that there must have been a plan for it to go somewhere.

Volador and Casas have fought a lot in the last few months, including a title match in Puebla a month ago. The matches have been good, if a bit short. Casas appears to be prefer the quicker matches of late, though they’ll probably go longer because it’s the main event. Casas is slowing down a little bit, but he’s got still got great timing and willingness to do pretty much anything the tecnico wants. Volador big matches are built around doing all the highspots possible for near falls, though this one is likely to have a fair dose of rudo tactics too. Volador’s not above that sort of thing, and getting a dirty win works as revenge for Casas’s own cheating.

As with the other hair match, the outcome is not in any doubt. Negro Casas is a legend, and a person who’s lost nine hair matches over the last thirty five years. (His win over Super Parka was his first victory in one of these in since 2004.) Casas isn’t going to be hurt by a tenth loss, and Volador’s not going to lose his for the first time to someone old enough to be his father.

The suspense is in where this is all going. Assuming they make it thru this show unscathed, Volador and Rush have both never lost a hair match, and they’re pretty much the top tecnico and rudo in the promotion. The trilogy of giant mask CMLL Anniversary matches came to an end with Atlantis defeating Sombra last year, and there’s no obvious match being prepped to take that spot this year. Last year’s show ended with a tease of Rush versus Atlantis, but nothing’s been done in that direction since. Volador versus Rush is one few other matches which might come close to filling the building at Anniversary level prices, and it’s something they’d want to make clear is coming to the fans who only pay attention to the bigger shows.

Even without a future direction, this should be an excellent show. The undercard will be low stakes but pure entertaining matches. There may not be something with the athletic insanity of Kamaitachi versus Dragon Lee, but the 4v4 match won’t be far off. The two hair matches are going to be very heated and emotional outcomes. It’s a late Friday night show (and it’s unfortunate it’s only available by staying up late), but it’s one of CMLL’s best iPPV efforts and worth checking out. 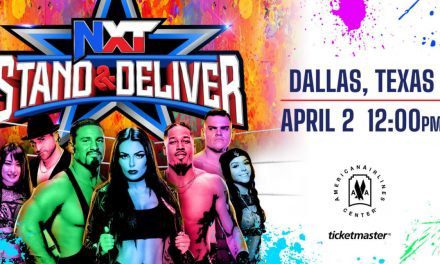 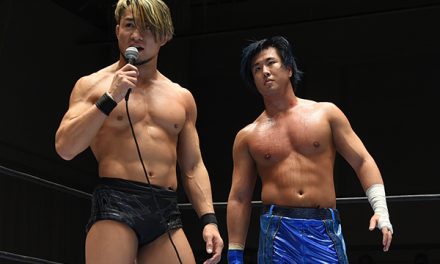 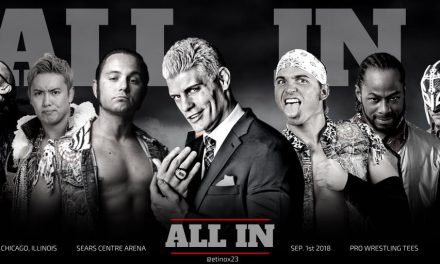 ALL IN (September 1) Preview & Predictions