Earlier this week, EVOLVE/WWNLive promoter Gabe Sapolsky shocked the world with news that Japanese wrestling superstar Kota Ibushi would be coming to Dallas to take part in WrestleMania Weekend festivities. The 33-year-old Ibushi, famous for his work in DDT and New Japan Pro Wrestling, will be appearing at both EVOLVE 58 and EVOLVE 59 in a non-wrestling role (pictures and autographs) before taking part in the WWN Supershow: Mercury Rising 2016 6-man tag main event.

Thankfully, that doesn’t appear to be all Ibushi will be doing WrestleMania weekend. Yesterday, a number of tweets pointed towards Ibushi being involved with another promotion WrestleMania weekend but not anyone obvious. An exact quote from one of our sources (who is close to the situation) said “Ibushi confirmed to do a second in-ring appearance for (WrestleMania) weekend. Won’t be what you’re probably thinking either.”

What the source is likely referring to is some involvement with NXT and WWE, as rumors have swirled around Ibushi joining up with WWE’s developmental brand and possibly taking part in WWE’s upcoming Global Cruiserweight Series.

Later in the day, one the primary sources for Japanese language news/reports the great @enuhito tweeted the following:

Breaking News:
Ibushi revealed the reason why he will wrestle in EVOLVE.
↓
Read Morehttps://t.co/Pkan0aVKtx pic.twitter.com/60DhDaYXXC

In the link, enuhito translates an interview with Tokyo Sports where Kota Ibushi reveals one of the reasons why he chose to wrestler in EVOLVE: he wants to wrestle in Kaiju Big Battel.

Kaiju Big Battel is half-part pro wrestling, half-part parody of the famous Japanese kaiju films of years past. The promotion is still very much “wrestling” but don’t expect five-star classics or dazzling displays of technical prowess. The characters are as over-the-top as you’d expect from a parody company with such stalwarts as Paco Plantain, Kung-Fu Chicken Noodle, Steam-Powered Tentacle Boulder and the dastardly forgotten Nazi experiment-turned-plastic surgeon, Dr. Cube.

In past years, Kaiju Big Battel has been presented as part of WWNLive’s WrestleMania weekend experience, often as the last show on Friday night (Kaiju Big Battel’s entertainment factor is undoubtedly aided with libations), emanating from the same building as the earlier EVOLVE shows and airing on WWNLive’s streaming network.

Seems like it’d be awfully convenient for Ibushi should he want to pursue a match/performance in Kaiju, right?

enuhito reports that Ibushi has wanted to be part of Kaiju Big Battel for “over 8 years.” Again, there’s more to this than just blind speculation as Ibushi has made it known his intentions of performing in Kaiju Big Battel. In 2009 when Ibushi was in America to take part in CHIKARA’s King of Trios tournament, a number of vignettes were filmed featuring Ibushi and members of the Kaiju Big Battel staff:

In the video, Kota expresses his interest in wrestling for Kaiju Big Battel. Ibushi says (through translator extraordinaire Michael Nakazawa) that last time he was in America, Chris Hero gave him many Kaiju Big Battel DVDs.

Thanks to our friends at the amazing DDT Wrestling blog (Dramatic DDT) we know that this wasn’t the end of Ibushi’s interactions with Kaiju. When Ibushi returned to the United States for the debut of EVOLVE in January 2010, he along with Nakazawa and Munenori Sawa paid a visit to Studio Kaiju.

Unfortunately, nothing came of it.

Years later, Ibushi and Kaiju once again linked up for a series of videos which began with Ibushi writing a letter to the Kaiju Commissioner. Ibushis’s effort were all for naught as the Kaiju Commissioner was murdered by Dr. Cube, who assumed control of the company). Dr. Cube told Ibushi he would never get a chance to fight in Kaiju Big Battel. Undaunted, Ibushi traveled to Dr. Cube’s hideout to take matters into his own hands.

A video of events that took place a few years ago…
Part 2 tomorrow.

Part 2: Video of events that took place a few years ago…
How will Kota Ibushi take his rejection letter from Commissioner Cube?
Part 3 tomorrow.

Kaiju Big Battel has re-released both of these videos on their Facebook page this week. They’ve also revealed a brand-new poster with images of Ibushi battling Dr. Cube — “Maybe we can get some copies to bring to Dallas!”

Then, so as to say “Why aren’t more people talking about this?!”. The Kaiju Big Battel Facebook page linked to a 4chan/rWoo post discussing enhuito’s translation adding a playful “cats outa the bag”.

This is either really great marketing or we have Ibushi’s other spot WrestleMania weekend nailed down.

I can see people being disappointed that of all the things going on WrestleMania weekend….THIS is where you’ll see Ibushi but take a minute to realize who you’re talking about.

This is a man who just a few weeks ago poured his heart out saying he wanted more out of wrestling, he wanted to start a new company (Ibushi’s Wrestling Research Institute) and take wrestling out of its comfort zone. Ibushi mentioned wrestling may not even need ropes, maybe it’s more than four-sides, or maybe it’s less, maybe it’s a prism, maybe there’s no ring~! Really, there’s no better place for Kota Ibushi to re-debut than Kaiju Big Battel.

Let’s hope this speculation is true. 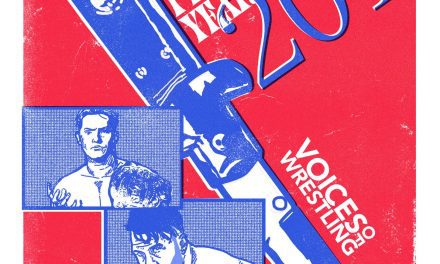 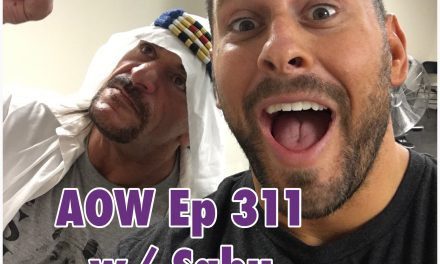