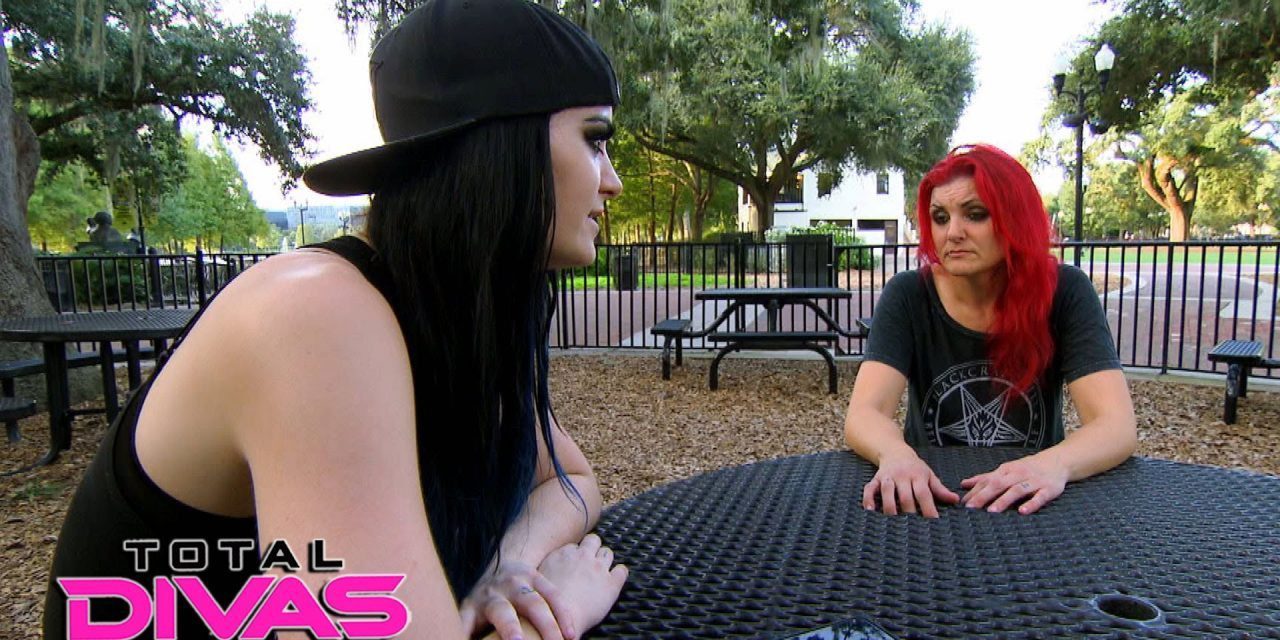 You guys, Zeb Colter is in this week’s episode of Total Divas, so nothing else matters.

Actually, one other thing matters: He’s on Total Divas to weigh in on whether Brie Bella should get a scooter. He does this while sitting on his mobility scooter. This is not directly addressed by anyone in the scene, so you really get to savor the visual — well, it’s not visual irony, since he’s not expressing any anti-scooter sentiments. Let’s call it dramatic tension.

Beyond that moment (which I have now over-analyzed past recognition, and which will consequently be horribly disappointing if and when you ever watch the episode), this week is all about mothers. Paige’s mother comes for a visit, prompting big and long-looming changes in Paige’s life; Rosa is about to be a mother, and her boyfriend is playing Big Brother; and, as usual, Nikki Bella is acting like she’s Brie’s mother.

Which is where the scooters come in. Renee Young, who plays a prominent role in this episode, kicks things off by gushing about her new motorized scooter. (Actually, she keeps using the plural pronouns “we” and “our,” which has me holding out hope that Dean Ambrose, who has previously been mentioned on the show but whose face was blurred in his one and only drive-by background appearance, may actually show up on this season of Divas, especially since we’ve been getting a lot of Daniel Bryan, and we know they’re good enough friends that Ambrose offered to throw a Braniel bachelor party.)

This gets Brie thinking about scooters, since the Braniels currently own just one car, an arrangement that’s fine when they’re on the road but occasionally challenging when they’re both home and need to do things like go to the gym and the market at the same time. Eco-conscious Brie likes the idea of a Vespa’s smaller carbon footprint.

Enter Mother Nikki, who is convinced that a scooter will spell Brie’s untimely death, and who spends the rest of the day at work losing her mind about the idea of her twin sister riding around Phoenix on a scooter.

Brie placates Nikki by promising not to buy one, a promise she immediately sets out to break, accompanied by Renee Young, who rides shotgun and scans Craigslist listings (“You know that murderers live on Craigslist, right?” Renee asks) as she and Brie drive around Phoenix talking at length about how safe scooters are.

It should be noted that they do this while wearing their seat belts with the shoulder belts tucked behind them, a decision that effectively renders the entire seat belt useless, so any insight they have re: the relative safety of various motor vehicles should probably be taken with a grain of salt.

“I’m a grown woman. I make my own decisions. This is my life,” Brie proclaims, as the camera cuts back and forth to footage of her demonstrating that freedom of choice by wearing a seat belt in a way that definitely will not protect her in any way in the event of a crash.

Eventually they find a potential murderer on Craigslist who agrees to meet them in a public place to show them two scooters he’s hauled there in the back of a windowless van. They bring Bryan Daniel Bryan, who assists with the negotiations by honking one of the scooters’ horns every time he thinks the salesman is telling a lie. There is A+ Skeptical Daniel Bryan face throughout this exchange.

Ultimately, the scooters are purchased, and Renee and Brie roll in on them to surprise the Bella family at a restaurant. Nikki for some reason takes it all insanely personally and freaks out about how Renee is a bad influence and Brie had promised not to buy a scooter. Public opinion, however, is not on Nikki’s side.

“I think that scooter’s probably safer than your high heels that you walk around in,” brother JJ says. “She should be able to do what she wants, not have a controlling sister tell her what to do.”

The conversation continues in that thread back at the Braniel house, where Nikki tries to convince her brother-in-law to take her side. This backfires, as it often does in Nikki-Bryan exchanges.

“I don’t like how you’re trying to tell us how to live,” Bryan D. Bryan says.

“I’ve been trying to tell you guys how to live for a long time,” Nikki points out.

“Right,” D. Bryan Danielson replies. “And we don’t listen, which is why we’re so happy … You’re trying to tell us how to live, and I’m not convinced you know what you’re talking about.”

“Whatever. I give amazing life advice, so.”

Ultimately, the family has to agree to disagree, which appears to be the way most Bella family arguments end.

Down in Florida, Paige is experiencing some work-life balance issues — which is to say that she isn’t interested in trying to balance her personal life, which is a mess, with her work life, which is on fire. But she’s forced to confront how bad things are when her mom, pro wrestler Sweet Saraya, jets into town.

Well, “forced to confront” might be an overstatement. Instead of admitting to her mother — who loves Kevin* — that the relationship is anything but hunky-dory since Paige broke off their premature engagement, Paige does the obvious thing and decides to fake a happy home life.

“Kevin has agreed to pretend everything is completely and utterly fine,” Paige explains.

After a night of awkward drinking and acting out, Paige takes Saraya out for a heart-to-heart, which she kicks off by informing her mother that she will one day put her in a home. But then she chickens out and starts acting weird without actually getting around to talking about anything, to which her mother reacts by getting grumpy.

“I just think you might need to address a few freaking issues that you’ve got,” Saraya says, after which Paige storms out, announcing “You embarrassed me in front of everyone.”

This prompts another heart-to-heart, during which Saraya confesses that she worries about Paige being young and wild and on her own.

“I’m just so scared of you burning yourself out,” she tells her daughter. “It would kill me if anything happened to you and I couldn’t be there because of a mistake you made.”

At this point, Paige has to come clean and admit to her mom that things with Kevin are about to go the way of Bradley (the original Kevin). Not surprisingly, Saraya, it turns out, knows her daughter pretty well: “You’re not one to be pinned down, bird.”

This is the inspiration Paige needed to actually finally break things off with Kevin. Tough Enough winner Josh Bredl comes to help Paige move out (and in with… a friend? The house to which they bring all her stuff is clearly furnished and occupied, apart from the empty room that appears to be Paige’s).

“Right now I’m just gonna focus on me,” Paige announces. Which presumably is code for “buckle up for drunken antics followed by the kind of deep soul-searching unique to recently single twentysomethings”.

Finally, Rosa Mendes, who is halfway through her surprise pregnancy with boyfriend-of-five-minutes Bobby, is hungry.

Welcome to the second trimester, Rosa. It’s all uphill from here.

Rosa brings home an appropriately random selection of pregnant-woman groceries (chips, pickles, mashed potatoes, macaroni and cheese, a cake), at which Bobby recoils in horror and starts to guilt her about what she’s eating. He threatens to take it all away.

“There’s something that you don’t do to a pregnant woman,” Rosa says. “You don’t take her cake.”

For the record, this is literally the truest thing that has ever been said on Total Divas. Rosa Mendes, folks. Spitting PSAs and saving lives.

At this point, I feel the need to let readers know one really important fact: Bobby is easily the most uncomfortable, least natural person who has ever appeared on Total Divas, and he makes it really obvious when he’s doing something for the show that he probably would have done in real life.

I want to include that preface out of fairness before I report that Bobby then honest to god SETS UP A VIDEO BABY MONITOR IN THE KITCHEN. Pointed right at the fridge.

“I feel like you’re food-shaming me,” Rosa whines. Legitimately.

“Babe, it’s for the baby.” Yes, because the baby — who will not be born for another five months — will definitely be wandering around the kitchen solo. Go die, Bobby.

He also sets one up in the bedroom. Because “for the baby.” Uh, OK, Bobby the Love Sponge.

Out at a restaurant with Eva Marie and Mandy, Rosa talks about the food guilt at her house, including Bobby’s camera setup, and how it makes her feel like she can’t eat what she wants to eat.

“Oh, no no no,” Eva says. Which is the correct reaction.

“If you ever did that to me, I would probably kill you,” Mandy tells her boyfriend. Which is the correct course of action.

To get back at Bobby, Rosa and Mandy put on a little show for the cameras, staging scenes of Rosa shoveling food into her mouth. Turns out it’s all for naught, since Bobby later tells Rosa he hasn’t looked at any of the camera footage. She comes clean about the prank she tried to play, at which point Bobby gets emotional and claims he’s not trying to guilt her; he’s trying to protect himself. Bobby claims he has gained 20 pounds secretly eating Rosa’s pregnancy food.

The episode wraps up with some more of Total Divas’ new signature brand of terrible obstetric misinformation, including Rosa expressing her understanding that Bobby “might get boobies” if he takes her prenatal vitamin, and Rosa’s “doctor” telling her to avoid sweets because she’ll be tested for gestational diabetes soon. This man cannot possibly be a real obstetrician, because a real obstetrician knows that gestational diabetes has to do with how the body processes sugar, not with how much sugar the body consumes. #science

* Still his name? Pretty sure.