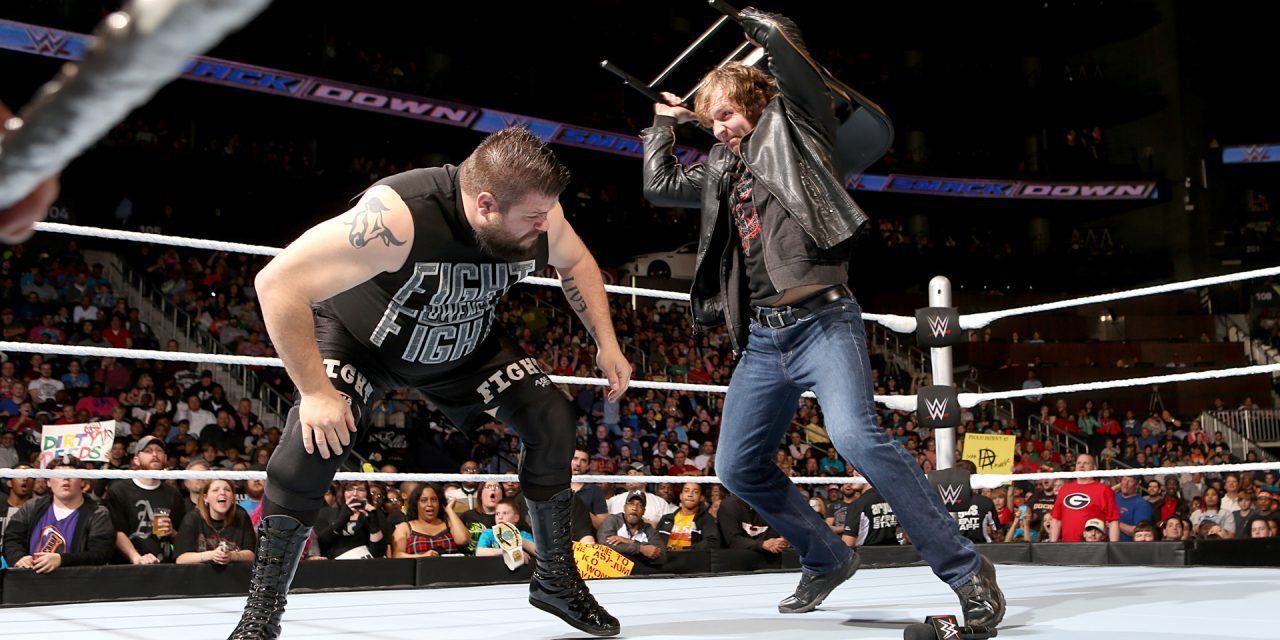 Some months ago, in another WWE SmackDown review, I talked about the idea of a fictional universe inherently needing a system of checks and balances to keep the powers of its heroes drifting wildly out of control. In a world populated with super-human monsters, weaknesses and measures become essential to ensure even a tenuous sense of order– and of course, to keep the stories interesting.

The key question for nearly three years now has been: what is keeping the omnipotent Authority balanced? They don’t even need to rely on the flawed whims of a golden boy anymore; Trips has taken matters — and the gold– into his own hands. This leads to bizarre, nonsensical situations where the Authority are apparently trying to oppress muscular everyman Roman Reigns, but constantly giving him title shots regardless. Why don’t they just fire him? Or relegate him to the pre-show? That’s within their kayfabe remit.

While frustrating for people who like wrestling to make vague sense and carry at least the illusion of consequence, Raw seemed to expose what Triple H’s personal fatal flaw might be. In the face of Ambrose’s swaggering arrogance and devil-may-care attitude, Triple H got irreparably riled up. He couldn’t bear a dent to his ego– the implication that he might not be every bit the man he says he is. In that fugue state of rampant insecurity, he was unable to turn down a challenge.

And despite the ubiquitousness of contract signings, apparently, sometimes, you can’t back down from words spat in retaliation.

“All of my bruises have formed into one giant bruise”

Dean Ambrose’s fatal flaw is impulsiveness too– the sort of impulsiveness that makes you run into traffic to impress a girl, or dump your possessions in a lake when you’re having a bad day. Dean’s got no regard for anything past the next five seconds, and why would he? It seems to be faring him okay thus far in 2016– being confrontational and greasy up in the boss’s face got him a title shot, after all.

Ambrose recaps the trouble he’s got himself in lately, with characteristic unapologetic cocky resolve, before Owens’ music hits and the IC champ stompily interrupts. “How dare you kick off SmackDown in this way,” demands Owens, making him the only wrestler to lend even a modicum of credence to the blue brand in months. Owens is grumpy that Ambrose’s lackadaisical musing about his multiple feuds are getting airtime when he still doesn’t have an opponent for WrestleMania. He petulantly rises to throw a chair at Dean, but Dean utilises the periscopic power of the tron to intercept the attack.

Sheamus and Rusev vs the Usos

Sheamus smiles generously at his Nations comrades as they pose happily together before this match starts, but Byron is quick to clarify: “An evil smile! With bad intentions!” as if we aren’t trusted to identify emotions without guidance.

One thing I love about the League of Nations– and this is mostly prompted by Rusev– is their absolute lack of irony. They have a refreshing aura of sincerity, where they appear to have genuinely bonded over their international interests and love of uncomplicated brawling. They like fighting, doing their little spinny-finger taunt together, and lifting each other up on each others’ shoulders regardless of whether they’ve won or not. In contrast, the Usos’ garish garb and crowd-pleasing chanting feels gauche and disingenuous. Rusev sells a DDT like his spine has crumbled into dust and his head is a thread away from rolling off entirely.

Sheamus gets the win with the Brogue, but more importantly: the big fleshy man-cuddle that ensues after every Nations battle.

Dolph Ziggler vs The Miz

The Miz has been playing rough since Christmas. After a long period in the twilight of being a comedy character overshadowed by an even more comical sidekick, he’s been thrust into matches on SmackDown wielding thunderous chops and wild gut-kicks– and looking more marvellous than he has in a long while. Maybe ever, even? This rematch, however, is only a very brief exhibition of his newfound hard-hitting attitude.

Ziggler catches the Miz off the ropes neatly into a backslide for a flash pin after barely 60 seconds. Dolph leaps on to the announce table to squat triumphantly in Mauro’s face. Ranallo seems utterly delighted with the whole situation, face split into a broad grin, cheerfully floundering for (clean) puns to do with very brief victorious performances. Meanwhile, the Miz grimaces, breathlessly, in the ring.

Take one of this on Monday resulted in an inexplicable floppy entangled cuddle, which felt more than a little familiar. It was such a package of nonsense with a convolutedly unrealistic finish that it took the wind out of the sails of those of us who had been eagerly anticipating this match-up as a real showcase for high-level female talent.

This match has a neatness and smoothness to its sequences: tidy drop toeholds and sunset flips, but little in the way of urgency or passion. And who could blame them? Charlotte and Flair flounce out with an extended entrance a few minutes in, taking focus from the action. There’s submission holds where the camera lingers on Flair’s jeering mask rather than the women in the ring.

Later in the match, Banks and Lynch are exhausted, tumbled on the mat in a pile of hair extensions, and as they drag their weary bodies erect they toss lazy forearms at each other, grunting. I usually love this. I love almost every iteration of it; wrestlers too tired to wrestle properly, so they just grasp and claw at each other any way possible. The issue is that Lynch and Banks have been wrestling just shy of six minutes at this point– and a lot of that was spent in slack-jawed gawping at Charlotte’s entrance. They have no right to be this desperate. Their tiredness feels insincere– or we have to believe that they have very little in the way of stamina and fortitude. Without the space to breathe, this match loses all drama.

The women spill to the outside, and Flair takes his opportunity to “woo” obnoxiously in their faces. While they’re distracted, Charlotte whacks Sasha and Becky from behind at the same time, causing a double DQ.

An additional frustration here: that a match with such critical consequences– the female equivalent of the Rumble, really– isn’t even deemed important enough to main event SmackDown. Instead, that coveted spot goes to a perpetual rematch with no repercussions for ‘Mania. The announcers constantly reiterate how important the match is– “The biggest match of either of these Divas’ careers!” yelps Lawler– to add insult to injury. A woman’s biggest match of her career is worth a slot in the middle of the card on a Thursday.

“I got a scoop in the commercial break!”

Where this plotline differs from the parallel story in NXT, however, is that we don’t have benevolent furrow-eyebrowed William Regal to authoritatively stroke his chin and pontificate– our big news about WrestleMania matches comes in the form of Renee “getting scoops” and dropping sarcastic comments on our Divas’ champion as she’s wandering down the corridor “woo”ing.

I’m not sure what Charlotte expected to happen; it’s fair to assume she’s watched wrestling before. A dirty finish never allowed someone to just be off the hook for defending their belt. The news is in: the Divas’ match at WrestleMania will be a triple threat.

Incidentally, Renee’s in a dusty blue jacket, which I like because it makes it look like she’s colour co-ordinated her clothes to SmackDown. It shows a level of commitment and professionalism which is sadly lacking from most of the backstage interviewers in wrestling these days. Give her a bow tie. Let’s fancy things up.

I’m not sure which element of the complicated cocktail of unexpectedness of this match I would’ve been most surprised about, if you’d attempted to tweet me from the future some six months ago. That Styles was in WWE at all– or that by March he’d have a deeply ugly T-shirt proclaiming a portmanteau of his alliance with Chris Jericho? That Y2AJ would be facing a genuine shot at the WWE Tag Titles– or that Kofi Kingston would a cut a promo about Styles that would involve the word “booty-os”? The state of wrestling in 2016 is bizarre.

AJ Styles takes umbrage to Xavier’s ringside tromboning, and tries to wrestle Francesca 2 out of his arms. There’s some beautiful irony to Styles suddenly having a problem with a stable’s ringside antics involving humorous props. This match is enjoyably fresh, and Styles reactive offence is particularly enjoyable against Kofi’s careless leaping. There’s a sequence early on where Kofi jumps from the top rope straight into a massive back body drop, and Styles just chains attacks on the poor man, dropping a low flying forearm, hitting the Ushigoroshi and sending shockwaves through Kofi’s ragdolling limbs. It’s so enjoyable because most of the cool stuff in WWE we know by heart now– we know the script for Cena’s five moves of doom; we know the way that WWE midcard matches pan out, with few exceptions. With Styles in the ring there’s the genuine mood that he appears to be adapting his wrestling to be the most appropriate for the situation he finds himself in.

Kingston hits an SOS but Xavier being ejected for shenanigans leaves Kofi vulnerable to a springboard forearm from Styles, for the pin.

Dean’s hurting here, and even executing a headlock leaves him wincing and grasping at his bandaged ribs. Owens capitalises, barging him in the abdomen over and over, with shoulders; feet; fists. When Kevin steps it up to sentons, Ambrose looks like he’s going to be sick.

“When I look at Dean Ambrose I almost want to feel sorry for him: but I can’t, because he’s so dumb!” squawks Lawler, articulating an opinion that had been on the tip of my tongue but I didn’t really want to say out loud.

Owens puts Ambrose in excruciating stretches, and tosses him about by his hair into the barricade. He hits a massive flying senton. It hits me that this match is a rehearsal for Dean’s Mania encounter. Dean keeps enduring, clutching himself, nursing his stomach, trying desperately to reverse Owens’ momentum against him. The camera briefly pans over a “Dean Ambrose for President 2016” sign in the crowd and I think the only person in the world with less forethought for consequences than Ambrose himself, is the person who wrote that sign.

Owens continues to dominate, with the only specks of hope for Ambrose being quickly thwarted by Owens’ superior strength. A suicide dive attempt leaves Ambrose dangling helplessly around Owens’ neck like a koala during a zoo visit, to be powerbombed against the apron. A Dirty Deeds attempt leads Ambrose to get reversed into a pop-up powerbomb, his body flattened into tissue paper against the mat.

Then, in the last few seconds, Ambrose gets his knees up on a cannonball. He hits the Dirty Deeds. And he wins. “The skill! The heart!” booms Ranallo. But I’m unconvinced.

Final Thoughts: While booking blunders baffle, the quality of combat continues to creep up. 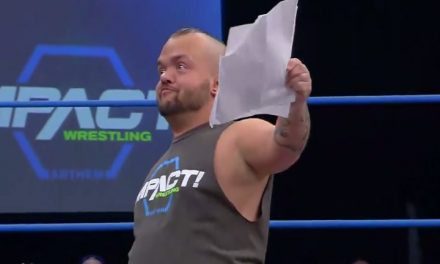 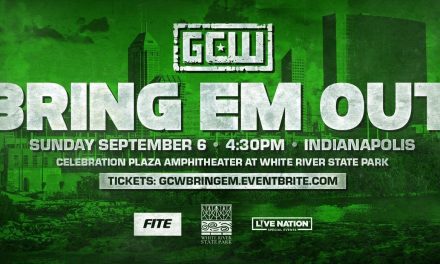