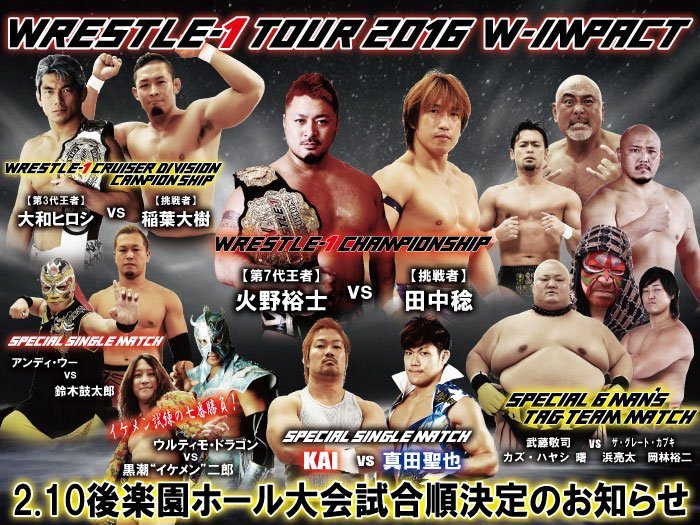 WRESTLE-1 has seen somewhat of a resurgence over the past few months. After several months of poor booking and forgettable in-ring work, things are finally coming together for W-1. The company returned to Korakuen Hall one month removed from a successful January 10 show — were they able to trump that and put on an even better show? Were they able to keep the ball rolling and pick up even more steam, or were the past few months just a fluke?

Some of these matches were clipped by Samurai TV so I can’t give full analysis, but what we got of this match was pretty fun, basically what’d you’d expect out of a show-opening eight-man tag. I like Kondo a lot and he’s been doing a great job as a heel, and though I may not be a huge fan of his work, I will say I do enjoy Kono in his role as Kondo’s right-hand man. Shota is one of the younger guys on the Japanese indie scene right now and he’s decent, I feel like a lot of people like him more than I do. He looks like he’s six years old. Not much to see here, Kondo won, as expected. Do note that he used Hino’s Fucking BOMB to put away Shota. N/R

Between the return of Seiya Sanada, the push of Yuji Hino (who beat Soya for the W-1 Championship on January 10), Jiro Kuroshio working his way up, and Shuji Kondo being reasserted as a top guy, Manabu Soya may end up in the mid-card role throughout the next few months. There’s an obvious Soya vs. Kondo singles match that needs to happen, but aside from that, I can’t see him doing much more than what he’s doing here. This was clipped down from 10 minutes to five and much like the previous match, was a decent enough was but because of the clipping, isn’t anything you need to see. N/R

Kotaro Suzuki made his WRESTLE-1 debut on January 10 and immediately challenge Hiroshi Yamato to a match for the cruiserweight championship, which Yamato defeated Andy Wu for just moments before. I’ve been following for Suzuki for some time now; I loved him in NOAH, I liked most of his All Japan run, and as a fan of his, I think this is a good spot for him. He’s not under contract, he’s just a freelancer, but there are a lot of good matches in store for him IF he’s here for the long run.

Wu is one of the most talented guys in the company and has had some amazing matches these past two years. Had these guys been given another six-eight more minutes and were under better circumstances (better crowd, higher up on the card), I truly think this could have been a ****+ match, but they just never really got anywhere and by the time the finish came I felt empty, wanting more. What they did was good, both worked hard, but the match just didn’t fully deliver, and I really can’t blame them. Suzuki got the win. ***

Kuroshio is going through a series of singles matches these next few weeks/months, assuming he’ll only have the matches on big shows like these. His first opponent is none other than Ultimo Dragon, who’s been in All Japan these past few years but makes occasional appearances in Michinoku Pro and various other promotions in Japan, the UK, America, and of course, Mexico. He’s not the wrestler he once was, but he’s still exceptionally good and can have great matches, as shown here. Kuroshio is so over, and this series of matches is only going to help. They have to be establishing him as a top player in the company in one way or another. So what do I see happening? I see them giving him all these big opponents, such as Dragon and such as Daisuke Sekimoto (his opponent on March 13), having him lose all the matches and then win the last one, which, as I said, should get him even more over.

The match itself was well paced, well structured, and very enjoyable. Dragon being the grumpy veteran and Jiro being the young, fiery yet naive babyface, the story of the match was just that and came across very effectively. After ten minutes of crisp sequences and solid grappling, Ultimo Dragon got the win. ***¼

Yamato beat Wu for the cruiserweight championship last month and immediately granted Inaba a shot. Inaba only has about two years of experience under his belt but has been coming along very nicely, while Yamato is one of the more underrated guys in WRESTLE-1. Inaba fought like he had something to prove here, having Yamato completely scouted and giving him a run for his money, which probably caught a lot of us by surprise. Young, inexperienced guys aren’t generally put in big spots, I went in not knowing what exactly to expect out of Inaba, but he worked extremely hard, as did Yamato, and the two had another fun, well structured match that everyone should go out of their way to see. This Inaba is something special, I’m telling you. ***¼

Kotaro Suzuki challenged Yamato after the match, as expected. They’ll have a match on March 13th.

A battle between former top guy of WRESTLE-1 in Seiya Sanada and failed top guy of WRESTLE-1, KAI. Once Sanada left the company to wrestle in North America in 2015, W-1 decided to make KAI their guy, having him beat Mutoh for the W-1 Championship in March, which he would then lose to Hideki Suzuki, only to regain a few months later. Due to how unpopular he was, the fans unwilling to accept him as their top guy, the company had him lose to Manabu Soya in September. Since then, he’s completely changed his look and has started working more of a hardcore style. At least WRESTLE-1 recognized the fact that the guy they were pushing wasn’t getting over and decided to take him off the hotseat. I don’t know, maybe some promotions can learn from them…

These two started feuding when they broke up as a tag team in All Japan. Sanada went on excursion in the summer of 2013 and announced that he wouldn’t be coming back to All Japan, while KAI left to join Mutoh’s splinter promotion, WRESTLE-1. Sanada made a surprise return to Japan in September at the debut W-1 show, where he lost to KAI. A few days later, they had a rematch, where Sanada got his win back. They had a handful of singles matches ranging from 2008 to 2012, not apart of any sort of feud, so they know each other pretty well and have decent to good chemistry (I probably enjoyed their previous matches more than most).

This was unlike any other match they’ve had together. It was more of a walk and brawl type of match, which makes sense given KAI’s new character and there still being some bad blood between the two. The first several minutes saw KAI take him through the crowd, smacking his head into the walls and pushing him around. Once they got into the ring, they exchanged some slaps and some strikes, Sanada eventually coming out on top after landing a top rope moonsault, which felt pretty flat but didn’t take anything away from the match. Sanada seems to be working a lot of WRESTLE-1 shows in the future, but I’m not too sure whether he’s agreed to sign a contract or not. As for KAI, I look forward to seeing what the future holds for him, because these changes have done him well.

Not a match that’ll knock your socks off, but one I enjoyed and one you should totally check out, especially if you’re one of those who were down on KAI last year, which should be everyone, really. ***½

WRESTLE-1 has been doing a lot of these matches lately and I have no idea why, but they’re a lot fun. Okabayashi and Hama had a great singles match in BJW a few weeks before this show and had some more exchanges here, which was by far the best thing to come out of this. Hayashi and Kamitani had some nice ones as well but those lasted all of ten seconds. The match was nothing special but was fun and easy to watch. Mutoh’s team won. **¼

While walking to the back, Mutoh and Hayashi were stopped by former All Japan rookie Keiichi Sato, who said that he wanted to compete in WRESTLE-1 as a direct understudy of Kotaro Suzuki. He was booked for the show on March 13th.

Hino was always a guy I thought was simply a good wrestler that works for a company nobody cares about (K-DOJO), I didn’t think too much of him, I knew he could go, I enjoyed him in DDT, but man, he’s been SO good in W-1 since coming in and he’s been booked so well. Minoru Tanaka was the best opponent they could have given him, the underdog junior who the crowd would undoubtedly get behind and create a compelling story. That’s exactly what happened, Tanaka got a few hope spots but would continually be shut down by Hino, whether that be by reversal or Hino straight up no-selling him, giving him the double bird and laying him out. To compare to Hideki Suzuki and his reign as champion last year, Hino actually comes off as a menace during his matches, where Suzuki would just grapple and have…a match, which is why I disliked his reign outside of the Shuji Kondo match. Hino treated Tanaka as a joke and his offense was totally believable. There were some submission and strike exchanges thrown in, don’t get me wrong, but by and large, this was Hino’s match. Tanaka took as much as he possibly could but ultimately fell to the Fucking BOMB in the end. This ruled and you should totally watch as soon as possible. ****¼

Shuji Kondo came out and challenged Hino, so he gets the next shot. KAZMA SAKAMOTO then came out and stated that he and Hino were to gun for the W-1 tag straps, currently held by Kondo and Masayuki Kono.

Final Thoughts: This show was on a similar level as the January 10 show. The important matches delivered and the undercard was at least watchable. WRESTLE-1 is in a good spot right now and continue to pick up steam, so get on board if haven’t already.

WRESTLE-1’s next big show takes place March 13. The card is as follows: