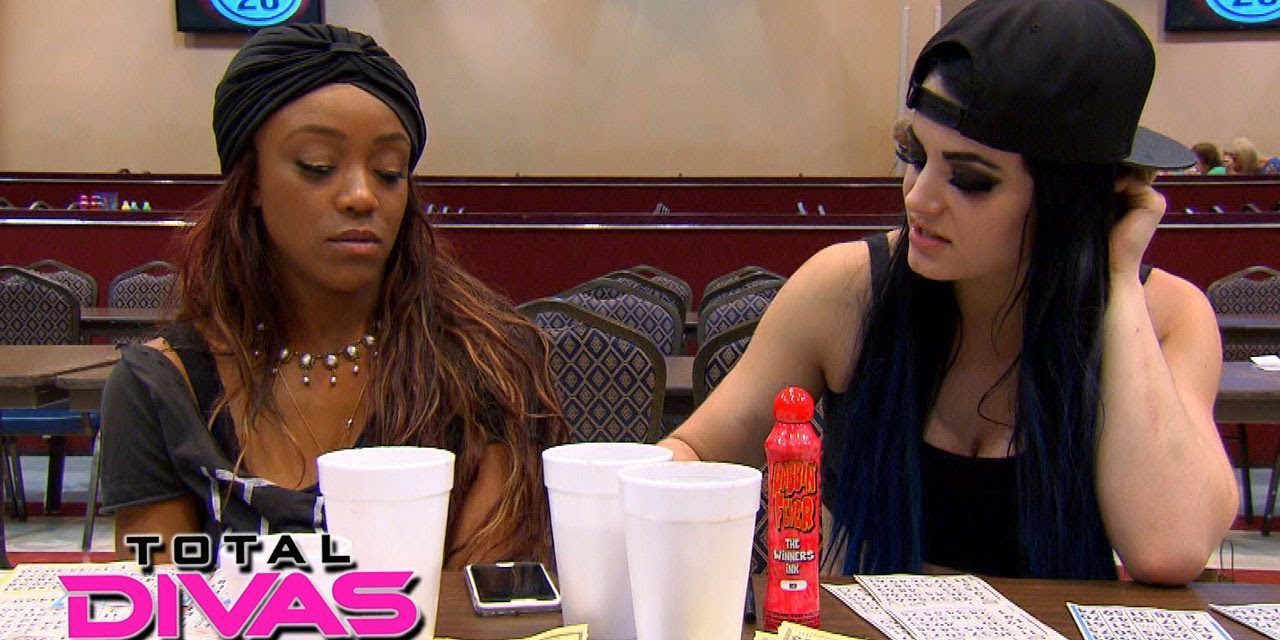 Before we launch into this week’s Total Divas recap, I’d like to open with a public plea to Vince McMahon: Get over yourself and bring back Titus O’Neil. Listen, I get it, the guy touched you in front of other people and apparently that’s the worst thing anyone could ever do to someone else at a live wrestling show, so clearly your decision to suspend him from work was totally measured and appropriate and not at all a stupid, dickish overreaction.

BUT. If there’s anything this week’s episode of Total Divas teaches us, it’s that a cameo from Mr. Belding of “Saved By the Bell” is nowhere near as good as an appearance by Titus. So man up, brush off your ego, and #BringBackTitus.

On to the show.

Somewhere in the world there is a repository of tattooed, high-maintenance douchebags dying to date professional wrestlers, and this is where all the WWE Divas who aren’t romantically involved with other wrestlers seem to find their boyfriends. So it is with Rosa Mendes, whose selection from this pool of personality-bereft Nikki Sixx knockoffs is named Bobby. His sole defining characteristic (other than being a vegetarian) is atheism. Rosa’s mom is very religious. They are about to meet for the first time.

Guess what the essential conflict is in this week’s episode?

From his first appearance onscreen, Bobby demonstrates the worst possible response to every remotely religious question and situation, insisting that having the unborn baby baptized will somehow ruin something for him even though he doesn’t believe it means anything, then refusing to even bow his head and hold hands while Rosa leads a pre-dinner grace at her mother’s request.

“It’s just one of those things where — I — uh — I don’t really do that, you know?” Bobby somehow articulates. “I’m very thankful for my food, but I don’t pray, you know?”

Let’s be very clear: Rosa — the mother of his child — has not asked him to convert. She has not asked him to get an ostentatious crucifix added to his motley collection of garish skin illustrations. She has simply asked him to maybe keep his opposition to religion on the DL until her mom has had the chance to get to know and love him, and in this case all that means is that he has to basically hold Rosa’s hand while she does a few quick seconds of prayer before the meal she has hired a private chef to prepare and then passed off as her own cooking. We can assume holding hands is a level of physical contact with which he is comfortable considering he is the father of Rosa’s unborn child.

After Rosa’s mama asks about baptism plans, Bobby says he doesn’t want to “put limits” on his child by teaching her religion, after which Rosa offers everyone salad and then Bobby gets up and walks out of the house. In the driveway, he tells Rosa he feels “awkward and weird” and doesn’t understand why they have to talk about it at all.

“I’m not gonna sit in on things like that ever again, OK?” he says, practically in tears.

They go back inside and try to move on after a hesitant apology from Bobby, and later Bobby’s dad, who is also there and is the most chill person in the room, assures Rosa that everything is going to be all right. Which is nice, but not possibly true. Attention, Rosa: If the man who is the father of your child can’t have a calm, non-confrontational discussion with your religious mother about religion and freaks out about having to talk about difficult subjects, he is not going to be able to hang with anything that happens once the baby actually enters the world. Send him back to Central Boyfriend Casting, let him drown his sorrows in a new tattoo, and pick out one of those clever, funny guys at work to date. Maybe Titus, once his exile is completed. He’s tall and funny and Christians effing love him.

The titular friendship in jeopardy in this episode belongs, unsurprisingly, to the same duo that has already been involved in every nonsense playground argument aired this season.

Remember a while back when Alicia Fox and Paige got involved in some kind of bar fight and everyone wondered if it was a work for Total Divas? Apparently it was not, as they spend the first ten minutes of the episode freaking out about how to break the news to corporate Sith lord Mark Carrano.

(As Paige explains how the manufactured incident came to pass, she has some thoughts about social media and how it is “the worst” for someone in her position: “I dropped an F-bomb the other day and it trended worldwide.”)

After refusing to let Total Divas cameras into the closed-door meeting, Carrano apparently turns out to be very cool about the whole thing (it’s not like they did something outrageous, like committed murder or grabbed someone’s arm), and he handles damage control while Fox takes a moment to reevaluate her life choices.

“I’m really thinking about my reputation,” says the woman who has routinely acted like an unhinged lunatic on the reality TV show that is filmed with her full knowledge and on a prearranged schedule of cameras following her around without any provocation from a stranger in a bar. “It makes me feel like a lifestyle change needs to be in effect.”

During a weekend visit in Orlando with Paige, Foxy wants to stay low-key and do some furniture shopping, but she forgets to circulate the reevaluating-my-priorities memo to Paige, who hijacks the day with a boozy brunch, followed by a trip to the local Shriners’ club to play bingo with a bunch of salty old folks.

After a heart-to-heart (Total Divas has more in common with Full House than the producers and stars of either show would probably want to admit) during which Fox says she doesn’t “want to be that party chick,” Paige realizes that all those times Fox said she wanted to go furniture shopping weren’t code for “get me more drinks, then bring me to a room full of fluorescent lights and old people so I can dab ink on a paper full of numbers” and does what any rational human being would do: takes her friend to a taxidermy shop and buys her an apology skull.

Finally, if you hated watching John Cena’s nose break when it happened in the ring, be glad you missed this week’s episode of Total Divas, when we get to relive that moment in all its graphic glory, this time with backstage reactions.

“I’m looking at my man, and I can tell that his nose isn’t in the middle of his face,” Nikki says. And then she asks what a lot of us were wondering at the time: “Why is he still wrestling?”

As it turns out, Brie Bella and Cena have a running joke about Nikki being possessed by the Needy Monster, a creature whose tendencies John demonstrates in a restaurant by screeching and clinging desperately to Nikki.

What Brie doesn’t seem to realize despite having shared the womb with her sister is that the Needy Monster is apparently rooted in Nikki’s anxiety issues. After John’s injury, Nikki Bella starts experiencing more intense anxiety than what is her normal baseline high anxiety, feelings she shares with Nattie but not with her twin sister.

“The fear of losing him is what it is,” she explains to Nattie as she talks about how she needs to wake up early and pray for John if she knows he’s going to be on an airplane.

Brie, meanwhile, doesn’t realize how stressed out her sister is and loses it when Nikki pretends to be Brianna Danielson in order to get an extra key to Brie’s hotel room, which she then invades with a camera crew. (Brie says a lot of things about personal space, but mostly it seems like she’s mad that the surprise cameras showed up after she’d taken her makeup off for the night.)

Nikki instead seeks refuge with Nattie, this time calling ahead to give her new roommate time to “put some pants on” before the cameras show up. They have a heart-to-heart, after which Nattie talks to Brie and lets her know she might want to take her sister’s obvious fear and insecurity a little more seriously.

“She said that she feels terrified … she said that ‘Brie doesn’t believe me,'” Nattie explains.

Nattie manages to convince Brie that Nikki has something deeper going on, and Brie, repentant, invites Nikki to visit her in Phoenix. Nikki shares her unrelenting stream of fears — that John will die, for example, or that she will be killed in her sleep — which the twins diagnose on the spot as directly stemming from the sudden death of their father-figure grandfather eight years earlier.

PSA: This is not how therapy works. Please seek professional help if you travel for a living and are so anxious that you can’t sleep in a hotel room by yourself.

“When I’m in the room with you, it’s like, OK, a family member’s nearby (and) I feel safe,” Nikki explains.

“Now it makes me feel really bad that I kick you out of my room,” Brie replies.

“No offense, but it should.”

Brie promises to let Nikki stay with her on the road, which prompts a bittersweet moment — Nikki asks what they’ll do “when Bryan comes back,” and Brie promises they’ll get adjoining rooms. Now, of course, we know that Brie had by then already witnessed Daniel Bryan’s concussion seizures and must have known he would never be coming back. STILL TOO SOON, E! NETWORK.

Most importantly, Brie and Nikki discover, Brie now understands why Nikki went through a phase of needing to watch the Disney Channel as she went to sleep.

“And then I got — remember — hooked on ‘Wizards of Waverly Place’ and ‘Hannah Montana’?” Nikki asks. 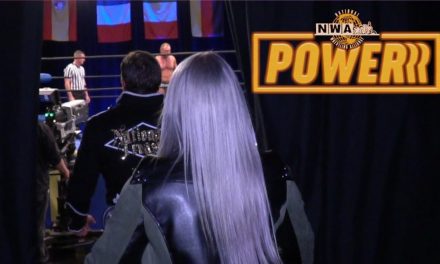 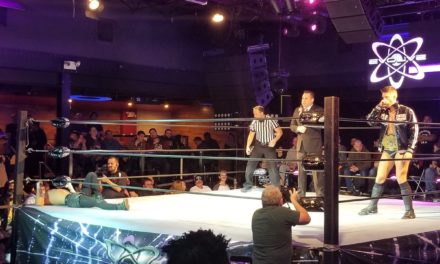