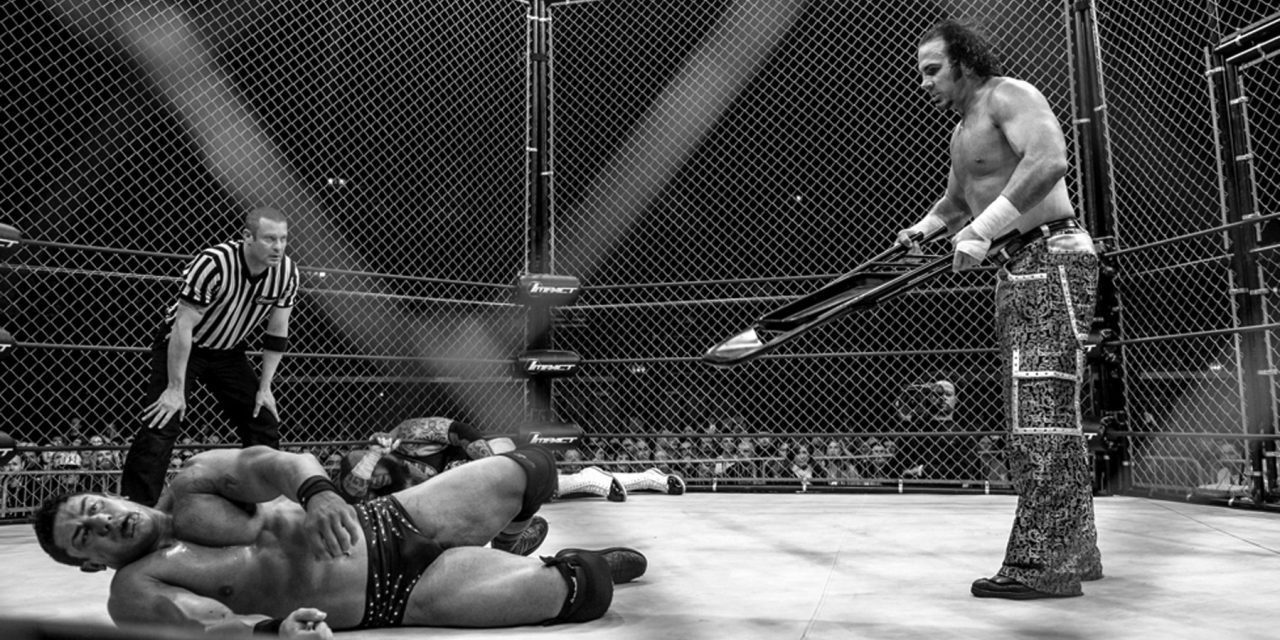 This was Lockdown so every match took place inside Six Sides of Steel.

They started by brawling around ringside. Young looked to piledrive Roode on the ramp but Young ate a backdrop for his troubles. Bram hit Storm with the Brighter Side of Suffering on the floor and joined Young in the ring to double team Roode after locking Storm out of the cage. Roode made his own comeback which allowed Storm a chance to climb back in the cage. Storm hit Young with a lungblower off the top. Young and Bram looked for a Spike Piledriver but Storm escaped, hit a frankensteiner on Bram which Roode followed with a frog splash for a close near fall. Everybody hit a big move and all four men were down. Beer Money threw Young and Bram into the cage a few times and hit the Beer Money suplex. Beer Money connected with the DWI on Bram to score the win. These four could do even better with more time but this was a rock solid cage match. Beer Money are a tremendously polished team and they made the most of the time they did had. ***

EC3 made his way to the ring and talked about his main event match with Matt Hardy before requesting that Rockstar Spud come to the ring. EC3 reminisced about their match a year earlier and said that what he told Spud after their match last year about how passionate Spud was wasn’t necessarily untrue. EC3 thanked Spud for helping him last week and extended his hand. Spud accepted the handshake and talking about how rotten Matt Hardy is. Spud was about to make a promise about later in the main event relating to revenge before he was interrupted by Matt Hardy. Hardy ranted about how everything was his because the Matt Hardy Brand absorbed the Impact Wrestling brand. EC3 promised to bring hell to Matt Hardy in the main event. These are the kind of in ring promos I’d like to see abolished. While this primarily served to complement the SWERVE in the main event, it was predominantly talking for the sake of talking. There’s nothing that was achieved here that couldn’t have been achieved with a three minute Spud promo backstage.

Tigre Uno lost the X-Division title a few weeks ago and then went on to receive his title match only to lose to Lee again. So I have no clue what Uno has done to earn yet another title shot. Pope touched briefly on the fact that the cage negates outside interference but they never told the story that Uno is getting another shot because Helms interfered in their last match. I know TNA didn’t exactly have a plethora of X-Division talent on the UK Tour but they could have easily placed Mark Andrews or Will Ospreay in this position instead, if for no other reason than variety. Josh Mathews threw out the greatest cruiserweight of all time line when referring to Helms and while I understand what he’s saying, fans don’t make the distinction between cruiserweight and X-Division in their head. So the essence of what he’s driving home is that Helms, who has never wrestled in TNA, is better and more important than fourteen years of X-Division wrestlers – which is the exact opposite of what TNA should be seeking to reinforce.

Lee controlled much of the match before Uno made a comeback. Uno kicked Lee off the top rope and dived off the top of the cage with a crossbody. Uno eventually made the cover but Lee kicked out. Lee hurled Uno into the cage and followed with the Small Package Driver to score the win. This was their best match yet but I’ve still been hoping for more out of these two. **1/2

Madison Rayne was attacked backstage and couldn’t compete. Jade came out first to literally no reaction. Jade is so much better than The Dollhouse act allows her to be. She’s never looked entirely comfortable in that role. Gail Kim was out next. Weapons were attached to the side of the cage because they didn’t have a ceiling again this year. Kim and Jade climbed the cage and knocked each other off. Marti Bell was out next, giving The Dollhouse the numbers advantage. Velvet Sky was next. Velvet ran wild, making the match considerably more interesting than when Marti was on offense. Rebel rounded out The Dollhouse team. Rebel finally grabbed a weapon, which for some reason the others neglected to do. Maria ran out and feigned joining Kim and Sky but instead locked the cage door and left.

Velvet and Kim made a comeback and hit a double flapjack off the top on Jade. Kim hit a kendo assisted Eat Defeat but Jade broke up the pin with a Kendo Stick and followed with a Package Piledriver on a chair to score the win. This made history not only because it was the first ever women’s Lethal Lockdown but also because it was the first time ever in 16 Lethal Lockdown matches that the heel team prevailed. The ladies did a good job here, particularly Velvet Sky who rose to the match in a way she tends not to do. Nothing spectacular but a good, solid Lethal Lockdown match. ***

Kurt Angle came the ring. He’ll face Bobby Roode next week and Bobby Lashley the week after. Angle discussed how he beat Lashley in Wembley arena to win the World title last year. Lashley made his way to the ring. Lashley talked about how he thought his promise to destroy Angle in their match would light a fire under Kurt but Lashley said he doesn’t see the Kurt Angle of old. This made Angle mad. Angle challenged Lashley to wrestle there and then but Lashley declined and left. They’re playing up an interesting dynamic here where a more heelish Lashley is trying to get in Angle’s head and avenge his loss one year earlier. Lashley was good again here. Though recent high profile turns of Matt Hardy and now Spud may lessen the impact of Lashley’s.

Eli Drake vs. odarG the Great

Josh Matthews pointed out that odarG is Grado backwards. I don’t see it honestly. Basic comedy match with odarG being unable to climb the cage and Drake’s bum being exposed to the world. Jessie Godderz interfered but Mahabali Shera evened the odds. Eli Drake feeds and bumps really well for stuff. odarG escaped the cage but lost his mask in the process. It was Grado! I didn’t see that coming. Perfectly fine match for what it was. Drake is undoubtedly charismatic but is untested in a major singles match environment. I’d like to see him doing something that challenges him to be something more than he is right now and see does he rise to that challenge and improve or whether he is at his level right now and has hit a ceiling. Grado pleaded to Billy Corgan later in the show but Ron and Don Harris escorted him from the building. *1/2

Jimmy Havoc was talking throughout the show about how much Rosemary meant to him so Decay beat him down. They also aired a really neat, stylised video for Decay.

It feels like they’ve come to this match way too quickly. There’s been far too little time to anticipate and really get excited to see EC3 get his revenge on Hardy. There’s been insufficient time to establish the stakes and what the match means to each man. Like many big matches in TNA it feels like it’s leaving a lot on the table. EC3 dominated until he missed a Stinger Splash. Tyrus flung a chair in to Hardy, who started swinging for the fences. EC3 threw Hardy into a chair wedged in the corner and hit a Stinger Splash. Hardy hit a Side Effect for two. Hardy hit another Side Effect on a steel chair for another nearfall. EC3 hit a TKO and looked to escape but Tyrus stood in his way. Tyrus beat up EC3 and tried to chair Tyrus to the ropes but EC3 turned it around. EC3 wailed on Tyrus with a chair. EC3 turned into a Twist of Fate but he kicked out again.

EC3 hit a Russian legsweep off the top. Hardy hit a low blow, placed a chair on EC3’s head and hit a Twist of Fate but EC3 kicked out again. EC3 went to climb out the door but Reby hardy ran out with a hammer. Spud intercepted her but turned on EC3 in a giant SWERVE and slammed the door on EC3’s head, giving Hardy the win. Spud attacked EC3 with a chair to end the show. I really don’t like turning Spud here. It feels like a betrayal of the last year of his character development for the sake of a cheap one off shock. I don’t see TNA booking Spud as anything other than a cowardly heel subservient to, and manipulated by, Matt Hardy and we’ve already seen that with Spud. It’s a step backwards for him. It’s character regression, not growth. Not to mention as I said last week that Spud would have served as a superb audience proxy for accepting EC3 in his new role and now that opportunity is lost. Also why did Spud help EC3 only last week, only to turn him now? It feels like yet another cheap substitute for real substantive television.

I couldn’t get into this at all. I’m sick to death of this formula. This was never about making the World title seem like something important, something worth fighting for. Everything that happened in this match was mere window dressing for the Spud turn and that is never how a World title match should feel. Its matches like this that stop me from getting excited about World title matches in TNA. I just know it’s going to be another retread of an approach that has never, ever worked. **

Final Thoughts: This was a really solid enjoyable show right up until the same old main event formula dragged everything down. 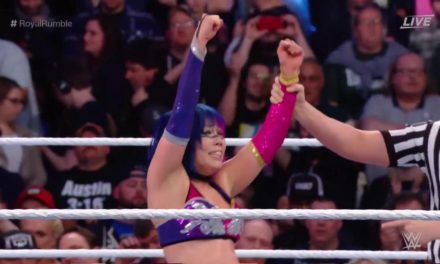 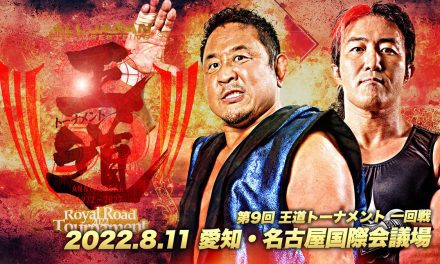