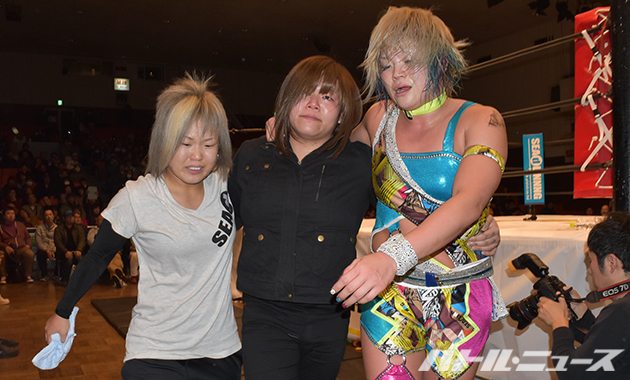 SEAdLINNNG is promoted by veteran Nanae Takahashi, and she started the promotion soon after leaving Stardom in the Spring of 2015. This is SEAdLINNNG’s third wrestling event, with many wrestlers from the past shows returning along with some new faces as well. Some are really new, at least to Joshi fans, as wrestler “Big Bang” Nicole opens the show. We also get participation from Diana, REINA, Sendai Girls’, and Gatoh Move before closing with a big match between Takahashi and Tanaka! Plus there is a bit of a surprise too, which by now you’ve probably heard about anyway. Without further ado, let’s get to it.

“Big Bang” Nicole is a bit of an unknown, but I did find that she wrestles out of North Carolina normally under the name Roni Nicole. Tanaka I still have a habit of calling a rookie but she isn’t, as she debuted in 2014 for Diana. She had some success in 2015, including winning the WAVE Young OH! OH! Tournament, and looks to build on that as 2016 begins. This will not be the match she starts on a positive path but it should be good experience for her.

As one would probably expect, Nicole controlled much of the action here with the younger Tanaka mostly getting in occasional hope spots but not anything that would lead to a pin. They get an A for effort, no one was coasting here, but it was a bit rough around the edges. I have never seen Nicole before, she is clearly trained so they didn’t pull someone that didn’t deserve to be there, but this was a difficult spot for both as Tanaka has limited experience against gaijin monsters. This lead to some spots just not looking right, I will admit I had to chuckle when they both did fireman carry slams back to back as it just seemed so unusual. I will admit to not at all expecting Nicole to hit a front flipping piledriver so there is definitely that anyway. This was good experience for the Tanaka and not a bad first time display for Nicole, but just a bit too disjointed.

The Big Bang by Nicole

The listing I found had this as Kyoko Inoue teaming with Takako, so you can imagine my confusion when Ito came down the ring. This is why it is always good to check all your resources! Ito hails from Diana while Inoue wrestles for LLPW-X. LLPW-X rarely has their own shows but that is her affiliation anyway. Kizuki and Miyazaki are Freelancers, with Kizuki having the most success recently in Ice Ribbon. It should be noted that it was supposed to be Kyoko Inoue in the match teaming with Takako, but due to an injury she wasn’t able to make it and Ito replaced her. Which I am sure did not really change the match layout any

First of all, Takako Inoue is still a babe at age 46, she hasn’t lost a thing. This match was a lot more fast paced than I was expecting with three older veterans in there, but they really kept the pace up and there was never a dull moment. Everything was executed well and both teams worked together, I was afraid it would end up like a series of singles matches if they weren’t as familiar with each other but that wasn’t the case. Miyazaki lagged a bit more than the rest, but Kizuki was able to make up for it as she flew around the ring and took a lot of offense from her veteran opponents. I went in with low expectations but this exceeded them, a pretty good midcard match between the veterans, everyone looked really inspired.  Mildly Recommended

This match is being fought under “Over the Top Rope” rules. Which means how it sounds, you can win the match by throwing your opponent over the top rope. I am assuming that was put in place so that Konami and Sareee have a chance of winning, as otherwise they would be pretty screwed. Sareee wrestles in Diana, while Konami and Syuri are both representing REINA. Mizunami meanwhile is a WAVE wrestler so we have a nice variation here of promotions represented. Natsuki Taiyo is the referee so I’m sure she will have her fun at some point as well.

Anytime Taiyo is a referee in SEAdLINNNG, it isn’t going to be a normal match, I think she misses wrestling quite a bit as she always gets involved even if it is not logical for her to do so. The match was way too random to get a grip on with not everything making sense, I don’t mind some weirdness in my wrestling but usually it is still based on something. I do like all four of these wrestlers a lot and there were some bright parts, but the utter lack of any kind of structure or meaning threw me. The over the top rope rule didn’t help the match, as it usually doesn’t, I would have greatly preferred just a straight tag match with these participants but this is SEAdLINNNG’s version of comedy. An above average match with a more playful twist and an easy watch but too all over the place for my personal tastes even though these are some of my favorite wrestlers.

Ayako Hamada and “Kotori” vs. Emi Sakura and Meiko Satomura

This is going to be fun. Hamada hand picked Kotori has her teammate, much to Sakura’s surprise as Kotori is one of her trainees in Gatoh Move. Satomura is damn near legendary and officially represents her promotion Sendai Girls’, while Hamada is from Wave. With the three veterans this would be a straight forward match, but having the very small and less experienced Kotori in there is a nice wildcard and should spice things up a bit.

They didn’t quite reach the level that I was hoping for but it was still an enjoyable match. Satomura was feeling a bit grumpy and didn’t give young Kotori a whole lot, which isn’t shocking, but Sakura of course did and the match gave all four a chance to shine. I liked that Kotori was highlighted for much of the match and the exchange with Sakura at the end was really done well, obviously they are very familar with each other and you could tell as they have great chemistry. A solid match, there was no ‘wow’ moment or particular part that really left an impression, but still enjoyable overall.  Mildly Recommended

This is what we all came for. Tanaka came out at the end of the last SEAdLINNNG show and this match was made, and really is one I have been looking forward to watching since it was announced. Takahashi is not one to back down from a challenge, she has wrestled against bigger wrestlers than this in her career and is in no way intimidated by Tanaka. Tanaka also is not going to take Takahashi lightly for that reason, this will not be a soft and playful match as both of them like to hit hard and hit often. Takahashi has a lot of pressure on her to deliver in her own promotion, so nothing will be held back here.

A really fun and straight forward match, a nice change of pace since it was more serious and hard hitting than all the other matches on the card. Tanaka’s big matches tend to focus around big moves and short term selling, and this match fit that formula as while both were dropping bombs they weren’t overly concerned with focusing on a certain area or selling any particular move for too long (aside from the big table spot). Which is fine as that is just the match structure, but it helps to know the style of match you are getting into. This was a very even match as they went back and forth throughout, both seemed determined to put on an entertaining match for the show’s main event. The head camera worn by the referee wasn’t used much so it wasn’t a distraction, and for those that don’t want to see Yoshiko she did very little even at ringside and didn’t even appear until the end. The selling for big moves was a bit off for me and I’d have liked Tanaka’s transition from being hit with the One Second EX to winning to have been smoother, but overall a really entertaining match.  Recommended

Final Thoughts: Going into the show, it was Tanaka vs. Takahashi that I was really looking forward to but not much else seemed that special. That held mostly true, the card up to the main event was perfectly fine but the same type of action that you see on any other Joshi event as a lot of these wrestlers leave their home promotions often to team up other places. Wrestlers like Syuri and Satomura are amazing, but when they are in 12 minute tag matches in the midcard there is only so much they can do. I will say though that the veterans were putting in maximum effort, no one was coasting here and that really made every match at least worth watching casually. The main event did deliver however and is definitely worth watching, it had all the drama and big moments that I was hoping for. Unless one of the other matches on the card has a particular favorite (I’d still recommend the Sareee/Konami match since I really enjoy all the participants individually), nothing on this card was particularly memorable aside from Takahashi vs. Tanaka even though nothing was bad either. Overall a solid event by SEAdLINNNG.