Last Friday, we released the final 10 matches in our 2015 Match of the Year poll. The 2015 Match of the Year project — our largest to date featuring 99 voters and just under 200 matches — always leaves a lot of room for interpretation and study. What regions stood out, what promotions did better than others and more important, what individual wrestlers stood out in 2015 and could make a case for “Best in the World”? Thanks to our very own Rob Reid (@TheRDouble) for culling much of the data used here and, of course, thank you to each and every voter in this year’s poll for helping us collect this awesome data.

Canada and America reigned supreme in 2015 leading in overall points, votes and matches. This shouldn’t come as a complete surprise given it’s the majority of our voters homebase, but for the gap to be that far ahead of Japan is telling.

This visualization tells the tale of just how dominant Can-Am was taking nearly half of all matches with Japan just eating into that sliver a bit. While encouraging overall, Europe and Mexico’s small slice of the pie shows a disparity we’ve attempted to reduce as the Match of the Year poll has grown over the years. Given the ambitious start to the year in Europe and the growing accessibility of Mexican promotions, this sliver could see an increase in 2016.

Another great visualization of how dominant Can-Am was in 2015. Can-Am swallows more than half of the pool in points and completely decimates both Mexico and Europe with Japan holding some amount of respectability.

Take that America! The only region-based statistic not dominated by Can-Am, Japan dominated first place votes taking more than half proving that while there may have been a higher number of elite matches in Canada and America in 2015—or that there was simply more eyes on Can-Am wrestling—the elite of the elite resides in Japan.

Votes, first place votes and points all went to New Japan Pro Wrestling in 2015. The most startling fact of all — it wasn’t even close. 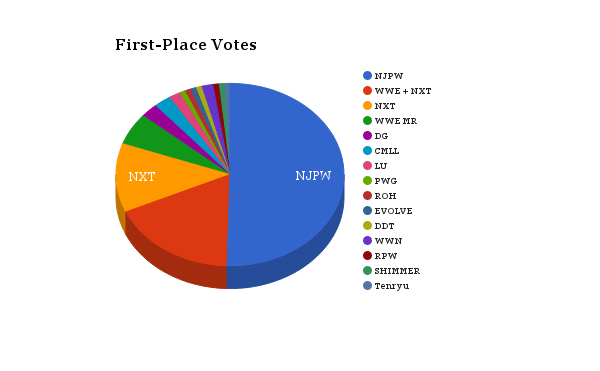 NJPW dominated every other promotion in first place votes grabbing 62 overall, 43 of which going to the Wrestle Kingdom 9 main and semi main event with an additional 8 for the G1 Climax 25 finals. In-between that dominance was 11 first-place votes for Bayley vs. Sasha Banks from August, giving WWE + NXT a solid spot in second. Interestingly, if you break up WWE and NXT into separate promotions, NXT took 15 first place votes, far exceeding that of main roster WWE. However, the gap in points (798 vs. 782) and votes (118 vs. 147) is minimal or inversed. Other promotions to garner first place votes including Dragon Gate, Mexico’s CMLL, Lucha Underground, Pro Wrestling Guerrilla, Ring of Honor, EVOLVE, DDT, WWNLive, Revolution Pro Wrestling, SHIMMER and Tenryu Project.

Much like first place votes, points was all NJPW this year, beating out the combined WWE and NXT brands by 1,103 overall points (or a little over 78 first-place votes). Yeah, it was a big gap. Worse yet if we split up the two WWE brands — NJPW would’ve beat NXT by 1,885 points and main roster WWE by 1,901. 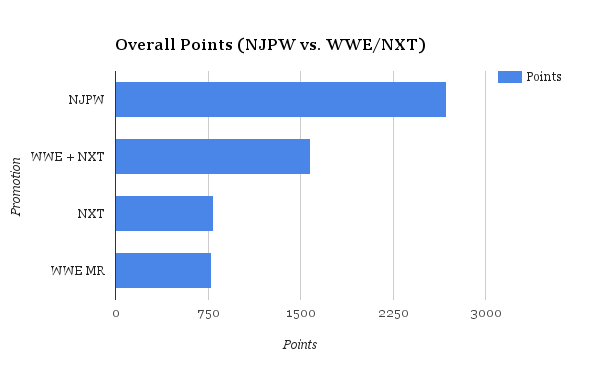 Eliminating NJPW and WWE + NXT from the picture gives us a very tight race between a number of secondary promotions across the world. Dragon Gate takes the biggest chunk but only slightly above CMLL, Lucha Underground and Pro Wrestling Guerrilla. In fact, those four account for nearly half of the remaining point outputs with major American independents like Ring of Honor and EVOLVE tailing behind. 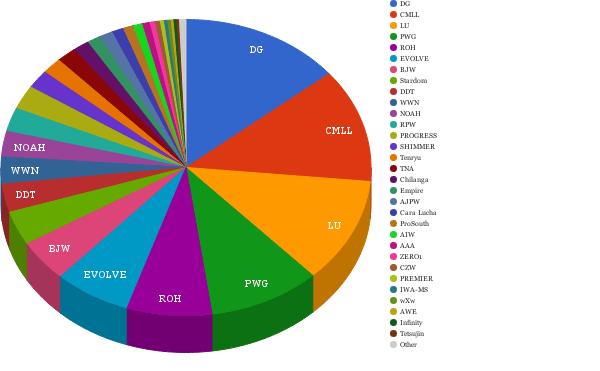 An interesting note regarding Ring of Honor, it’s vote total of 36 is tied with that of Lucha Underground and only slightly behind that of Dragon Gate (38), CMLL (39) and Lucha Underground (40), yet in points those three promotions blew Ring of Honor away. Given Ring of Honor’s near-universal in-ring praise this year, they didn’t register enough of the high-placing match votes in this year’s poll to beat out some of their competitors. 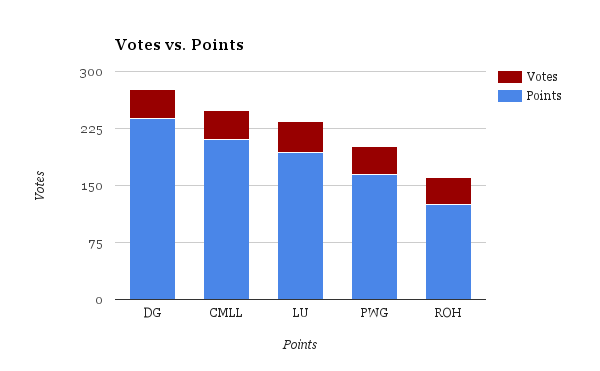 Now for the part most of you care about — what individual wrestlers dominated the field this year?

This year was all Shinsuke Nakamura who garnered the most points (1,096), most votes (132), and most first place votes (36). The only two categories Nakamura was topped in was the number of matches, that distinction when to Wrestling Observer’s Wrestler of the Year A.J. Styles and number of promotions which saw Styles, Kazuchika Okada and Zack Sabre Jr. tie at four. 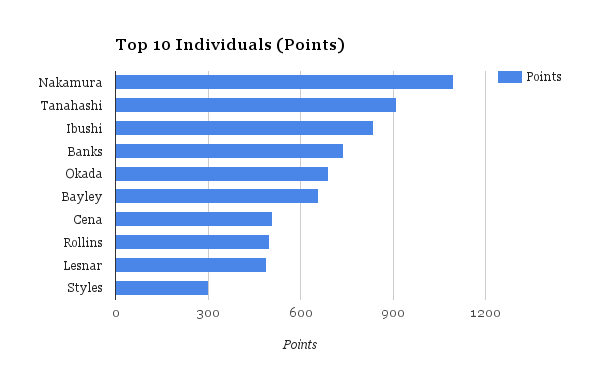 61 different wrestlers registered a first-place vote and in a microcosm of her character in WWE, Becky Lynch had the highest point total (91 points) without a first place vote. She was followed by Daisuke Sekimoto, Dragon Lee and his hated rival Kamaitachi. Of those, Sekimoto had seven different matches from three different promotions included in the pool.

Focusing on the number of matches included in this year’s countdown, Styles as mentioned is tops with 14 in four different promotions. That’s a theme among wrestlers in the Top 10 for match quantity. Second place finisher Roderick Strong had 11 matches total from three different promotions while Okada and Sabre Jr. had 10 in four promotions. The highest finisher of match frequency while sticking with one promotion is John Cena.

You can see the full breakdown of regions, promotions and individuals in the tables below. Find anything interesting? Share it with us on our forums and the Match of the Year discussion thread at https://www.voicesofwrestling.com/forum/viewtopic.php?f=10&t=844