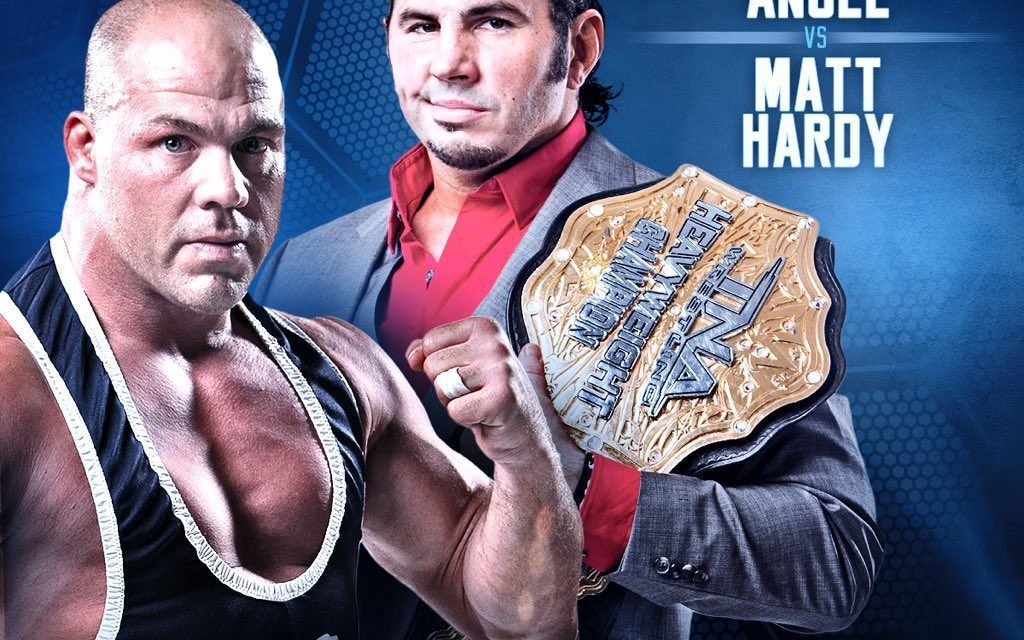 Matt Hardy opened the show and, along with Reby, mocked Jeff Hardy for being taken out by Eric Young last week. Eric Young and Bram came out and Young ranted for a while. He said he took Hardy out because Jeff took his number one Contendership. Next out was Kurt Angle. Angle announced that the next match in his farewell tour will be vs. Matt Hardy in the main event for the TNA World championship. Angle said he’d take down Hardy and co. by himself before he was joined by Beer Money. A brawl, which was joined by The Decay and The Wolves, ensued. Not only will Angle vs. Hardy take place on this show but also a 4 on 4 Hardcore War pitting Beer Money and The Wolves vs. The Decay, Bram and Young. I’ve always felt segments like this would be much better served setting up next week’s big matches rather than setting the table for matches later in the same show. Doing it on the same show serves little real purpose as it’s unlikely to hook in viewers on such short notice.

Raquel, played by Gabi from Tough Enough, watched from ringside with a particular interest in Lashley. Bar an early period where O’Shea attacked before the bell, Lashley dominated and won with a Spear. Raquel said she can bring Lashley pain or pleasure and then left.  *

Maria came to the ring without Mike Bennett. She said the Knockouts division is broken and needs her. Gail Kim took umbrage to this. Maria felt Gail Kim only being a wrestler was holding her back and said she could lead Kim to becoming mainstream. Kim challenged Maria to go ahead and fix the problem, challenging Maria to a match. Maria opted to flee instead. At least Kim vs. Maria is a fresh programme for Kim after the seemingly never ending Dollhouse malarkey. Maria is an extremely solid promo.

Hardcore War
The Wolves and Beer Money vs. The Decay, Eric Young and Bram

This was wrestled under Lethal Lockdown style rules where two started and another man entered every two minutes. Each man got to bring a weapon of their choice with them. Davey Richards, with a steel chair, and Crazy Steve, with a bat of some sort, started. Bram was out next with a steel turnbuckle. Next up was James Storm with a beer keg. Storm placed the keg against Bram’s groin and struck it with a chair. Up next was Eric Young with a kendo stick. Eddie Edwards entered during the break. Bram stuck Richards’ head into a chair and flung him headfirst into the post. Abyss with Janice, accompanied by Rosemary, was the final entrant for his team. Bobby Roode was the final man out with a hockey stick. Everybody hit their move before a seven pack suplex. The Wolves joined in on the Beer Money chant before Abyss took everybody out. Beer Money brawled with Young and Bram to the back. Steve blew mist in Richards’ eyes and Abyss hit him with the tag title belt for the win. A little too much nondescript brawling during the early stages of this match but this was good fun once all eight men made their way to the ring. **3/4

Tyrus jumped Galloway before the bell. That happens way too often in TNA, I suppose it’s a product of most TNA TV matches being around five minutes long. Galloway eventually made a comeback with chops and a top rope clothesline. Tyrus escaped a Future Shock attempt and followed with a heart punch. Drew powerbombed Tyrus out of the corner and looked for the Claymore before Mike Bennett appeared and hit Galloway with the Feast or Fired case to cause a DQ. This was probably the best case scenario for a Tyrus/Galloway match. **

Shane Helms was supposed to face Uno but elected to volunteer Trevor Lee as his representative instead. Lee dominated Uno before Uno hit a hurricanrana off the steps. Uno hit an enziguri but Lee followed with a standing double stomp followed by a small package driver to win the title. This was a disappointing match. Basically a glorified squash, it was way too short and while Uno’s reign didn’t exactly set the world on fire it ended on a whimper. The X-Division needs quality ten minute plus competitive matches to begin getting in back on track. It needs time and focus. Short X-Division title matches need to go away if people are ever going to take the division seriously again. Short matches make it feel like the nice little flippy side attraction it’s been for years now. *¾

An interview with EC3 aired. He vowed to head to the UK to chase down Hardy and regain the World title. EC3 was tremendous here (even if he was accompanied by needless background music) as a scorned ex-champion vowing to come back with a vengeance against Matt Hardy. EC3 has tonnes of promise as a babyface, if TNA are smart with how they protect him in his early stages.

Matt Hardy jumped Angle early but Angle came back with rolling German’s. Angle hit the Angle Slam for two. Is there a more worthless “finish” in wrestling than the Angle Slam? Angle locked on the Ankle Lock but Hardy rolled through and Angle fell to the floor. Tyrus dropped Angle on the floor. Tyrus then heckled Pop for a while to no reaction. Looks like they are laying the seeds for a Pope/Tyrus feud down the line. Angle escaped a Twist of Fate into an Ankle Lock but Matt rolled through into a pin for two. Hardy hit a Side Effect for another near fall. Angle hit a second Angle Slam but Hardy kicked out again. Is there a more worthless “finish” in wrestling than the Angle Slam? They exchanged punches before Angle rattled off another five German’s. Hardy hit a low blow and followed with the Twist of Fate but Angle kicked out. Hardy went for a Twist of Fate but Angle countered with another three suplexes. Angle went up top but Reby grabbed his leg allowing Matt Hardy to hit a Twist of Fate off the top for the win. Angle very much works “his” match these days and while they won’t really blow you away anymore I still enjoy them. He also looks considerably sharper in the ring than he did this time last year, where he looked slow and sluggish. ***1/2

Final Thoughts: A fairly solid show, helped pacing wise with two longer matches, but outside of a pretty strong main event there was nothing blow away on the undercard. TNA’s lack of ambition on the undercard of Impact these days is one of my bigger problems with the show lately – nothing feels like it’s aiming for anything other than being an inoffensive way to pass five minutes of TV time.

Lucha of the Hidden Temple (Episode 8)