Posted by Voices of Wrestling Staff | Feb 1, 2016 | Other Puroresu, Reviews 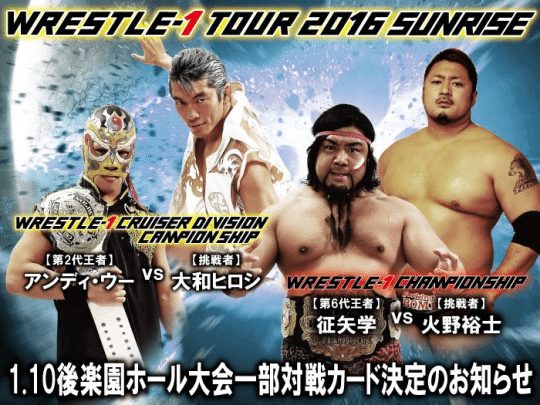 I always get a good laugh out of W-1. It’s funny how they’re so good one second, then so bad the next. It’s an ongoing cycle that hopefully comes to end soon, because they have such a talented roster. Shuji Kondo, Manabu Soya, Jun Kasai (to an extent), Minoru Tanaka, Kaz Hayashi, Jiro Kuroshio, Yuji Hino, Andy Wu… these are talented guys. REAL talented guys! They’ve been a fun promotion these past two months, when six months ago I would have argued that W-1 was the worst wrestling product in the world. Things have begun to look up, but you never know what happens next or what’s around the corner. This is W-1 at its very best, so take a moment to soak that up and hope that what is around the corner is good for them, and good for us.

Kondo is one of the top heels in the company now that’s he’s behind the wheel of the new TriggeR stable that was formed when he turned on Manabu Soya back in November. Inaba on the other hand is one of the younger guys in W-1 and has made some clear progression this past year. Kondo gave Inaba a lot and he looked good, when this could have just been a simple six minute squash match, which is what I had expected but was pleased at what we got instead. If you’re interested in seeing just how much Inaba has improved, go watch this match. It was also as good an opener as you’ll get out of W-1. ***¼

Straight to the point tag match here between the BJW Tag Champs, the young Sakuda, and Masayuki Kono, who I enjoyed in All Japan but who does absolutely nothing for me now. Sakuda took all the heat for his team. Kono is basically Kondo’s right-hand man in TriggeR, and therefore a top heel, so you’d think he’d have gotten more in, but they were up against Hama so I understand why you’d have the younger guy get squashed. Decent match, I suppose. Best possible use of Hama. **¼

Jackets were forced to vacate the UWA World Trios Championships a few days ago due to Yoshioka being unable to compete on this show. It was then announced that on January 31st, Tanaka, Hayashi and TAJIRI would take on Kuroshio, Nakanoue … and Yoshioka to crown new champions. You’re probably wondering why they vacated the belts if they’re just going to challenge for them at the end of the month, and well, I don’t have an answer for you because I’m just as confused as you are. Nonetheless, Yuya Susumu, also known as Dragon JOKER of Tenryu Project, FREEDOMS and other sleazy Japanese indie fame, has taken Yoshioka’s place while Yoshioka heals up. I’ve never been as big on Kuroshio as most, but there’s no denying that he has an odd charm to him and a boatload of charisma. The crowd loves him, he’s had his moments where I’ve liked what he was doing, but I think I’m starting to fully turn the corner on him now, because he entertains me. The match was structured exactly how you’d expect, fast paced, with everyone coming in and doing just about every move in their arsenal, for some wacky, goofy, fun. All six worked hard, TAJIRI wasn’t all that bad, and Kuroshio took some nice bumps. Good match. Tanaka pinned Kuroshio following a double footstomp. ***¼

An ongoing trend of this show to this point has been that the matches haven’t been anything particularly memorable but have been extremely fun to watch. KAI has been working a lot more hardcore as of late, which is probably the best thing for him, because he isn’t a good wrestler, but he is good at these types of matches. He was working like he had something to prove here and took the fight to Kasai, but Kasai has been doing this way too long to be phased by anything KAI threw at him. Shota was totally out of place here as the young happy-go-lucky babyface that KAI took under his wing, so he got his ass beat for 95% of the match and took the pin.

Kasai got on the mic and told KAI to get his act together or something along those lines, so by my guess, those two will have a singles match down the line. Once KAI got backstage however, a singles match between him and Seiya Sanada was announced for February 10th. Again, real fun match. ***½

Yamato is another guy I enjoyed in All Japan but hasn’t done too much for me in W-1. He can have good matches, but by and large he’s just a decent guy they have on the roster. Wu on the other hand probably has the brightest future of anyone on the roster IF used properly. Clocking in at only 23-24 years old and having only wrestled for about three years, the guy has a resume of great matches in W-1 against the likes of Minoru Tanaka, El Hijo del Pantera, and Hiroshi Yamato, and is consistently one of the most entertaining guys to to watch. You can add this onto his list of outstanding performances. The match was technically and fundamentally sound from all angles, all the reversals, sequences and such connected well and were extremely crisp. The crowd was behind Yamato all the way through as well which made him winning a lot more special. ***¾

Kotaro Suzuki walked out post-match and said that he had his eyes on Yamato. A match was then set up for February 10th. Suzuki vs. Yamato for the Cruiserweight Championship. Yamato said that he wants Daiki Inaba to have a shot as well, so that’ll be happening eventually. Suzuki is fresh out of All Japan and is one of the hottest guys on the market right now, so I don’t see him signing any contracts and remaining freelance, at least for the time being. He’ll have some good matches in W-1.

It was a Mutoh match in 2016, so you knew what to expect here and that’s what you got. The whole point was for him to get in the ring and pin a guy to pop the crowd. Sanada made his return to Japan at the end of 2015 and has had some good matches in Big Japan. He hasn’t shown much interest in returning to W-1 as a roster member but he’s obviously working a few shows. Completely harmless and inoffensive match but nothing I’d recommend watching. **

It sure took Hino long enough to leave K-DOJO. He’s a talented guy but unfortunately he was a talented guy in a company that nobody cares about enough to watch. He had a decent run in DDT as well and it’s clear that W-1 president/DDT owner Sanshiro Takagi sees a lot in him and wants him to have that big run as a top guy. Soya won W-1 Championship a few months ago when he beat then tag team partner Shuji Kondo and had a decent run as champ, defending against KAI, Ryota Hama and Masayuki Kono. He has the look of a champion, but none of his matches have been great. However, this one was unlike all the others. These two slugged the hell out of each other for 16 minutes and boy was I entertained. The selling fetish weirdos will probably hate this match, but if you like watching two big ass dudes chop each other to death and no-sell moves because they have too much pride, this is the match for you. Hino landed a Fucking BOMB (that’s what he calls the move, it’s great, I know) on Soya and got the win, and is thus crowned the new W-1 Champion. ****

Minoru Tanaka came out and challenged Yuji Hino to a match. Yes, Minoru Tanaka. Why? Why NOT? That’s why. That match takes place on February 10th.

Final Thoughts: Real good show top to bottom. W-1 is on a roll right now so let’s all hope that they continue to deliver shows like these.

Per Purolove.com, here’s the card for February 10th in Korakuen Hall: 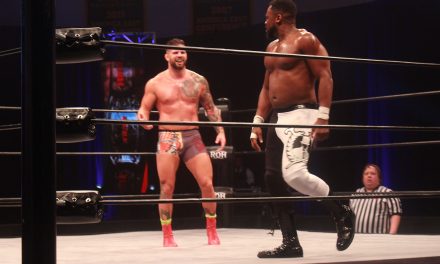 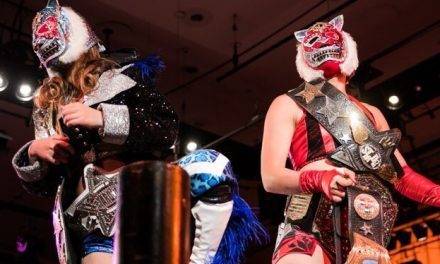