It’s very rare that I wish I didn’t write about WWE, but weeks like this are tough. Not only did too many things happen too quickly—something that’s riveting as a viewer, but hard for someone used to dissecting the minutiae on a show where nothing ever happens—there’s also a balance between wanting to sit back and revel in when wrestling feels incredibly good; and condemn it when it continues to be socially irresponsible and alienating. When it gives with one hand—and takes with the other.

I want to write about how my heart stopped when Sami Zayn stomped, unsmiling, down the ramp into the Rumble, and the ensuing exchange of elbows that that had the hairs on my forearms on end. I want to write about how I never knew I wanted a Tyler Breeze and AJ Styles feud but now I need it like burning, and when I close my eyes I can see Styles spinning in careening mid-air flips from a well-placed Beauty Shot. Less, I also want to write about how the forced kiss angle in the Divas’ match last Sunday was insulting and dangerous: and the flippant treatment of it by the wrestling media directly contributes to rape culture. About how the Rock’s continuing unapologetic transphobia and misogyny makes it uncomfortable to enjoy the pleasant nostalgic thrill of a returning hero.

Being a WWE fan who inhabits a body and cares about things means sometimes maintaining a myriad of contradictory thoughts and feelings in your head at one time. Like “I’m not okay with sexual assault angles, but I’m gonna keep watching anyway because I care about the character of Becky Lynch and I want to see her have great matches,” or “is it alright, as a queer person, to be excited to see AJ Styles?” and other things which we stay up late puzzling over with furrowed brows; while AJ Styles sleeps like a baby and Vince McMahon cackles in an aeroplane somewhere at his own creative genius.

“The Rock should be ashamed of himself!”

The show opens with a lengthy recap of the Rock’s interactions with the New Day from Monday: as always, the visiting legend has moved on quickly, leaving roster stalwarts to seethe on SmackDown and posit impotent counterpoints. The New Day are affronted, and despite their cheerful playground antics as they enter (which leads Jerry Lawler to try to dance along, and thus ruin everything), they feel the need to insist their superiority over the absent Rock by brandishing their belts and reiterating their superiority. “He called our beautiful unicorn horns a piece of a llama you shouldn’t say on television!” squawks Xavier, “this is a PG show!” The latter comment gets piped-in boos, which I find particularly interesting; that the production team would deem a statement about the WWE’s own chosen marketing ethos as boo-worthy. No wonder fans are confused.

The Miz arrives to agree that a fellow contemporary of the silver screen ought to have given him a little more respect; and being that the Rock—of course— isn’t here to defend himself, the obvious next of kin The Usos emerge to drop some sass and make hilarious quips that the Miz is wearing a dress, which is funny because women are second-rate humans and to be compared to one is the highest humiliation you can inflict on a man.

Anyway, Titus O’Neil and Dolph Ziggler come out to join Team Rock for some reason that Ranallo describes as “Wrestlemania season and tensions are running high!”

Dolph Ziggler, Titus O’Neil and The Usos vs The Miz and The New Day

As these early-show multi-man matches go—and after such an impressive showing by the New Day at the Rumble—this is one of the weaker ones of the past few weeks. It feels a little stilted and is wholly unmemorable. The strange ideological mishmash of tag partners doesn’t help much, with Titus and Ziggler feeling a bit surplus to requirements until the final stretch. Titus hits Clash of the Titus for the win, then springs into the crowd to rock out with some various children he is Honorary Dad to due to his various accomplishments in the field of fatherhood over the last year.

In case you missed Lawler at the Rumble, he contributes comments to this match such as “there he goes, doing those moves again!” and a bit of casual racism too.

This didn’t ever actually happen at PWG, but it could have done, and I’m glad we’re getting to see it now. I’m going to handwave the dubiously inconsistent conditions of earning a championship match and just be happy for Neville—and for us—because this is cool. Jerry Lawler has picked a theme to his commentary tonight, overlooking such old favourites as general misogyny and off-colour ex-wife jokes, in favour of “suspicious xenophobia”, and at the start of this match mutters: “something about a luchador being US champion just doesn’t sit right with me.” Ranallo flirts with letting it go, but then booms “Why doesn’t it sit well, King? This is a country of opportunity!” and King stammers “I don’t know, I just, I’m just… look, I just… I, I….”

Talking of Ranallo, he’s on fine form here and obviously enjoying a chance to reference some cruiserweight history and call some more outlandish moves. This match has a real satisfying mixture of power and speed, with Neville unafraid to reverse hurricanranas into devastating powerbombs, and Kalisto kicking hard just as often as he leaps and twists. It’s slower than its imagined PWG counterpart, with too much stalling precariously on turnbuckles for my tastes, particularly after binging on Fantasticamania last weekend—but is still compelling, a real even and believable match of skills.

Neville insisting on deadlift Germaning everyone is emphatically becoming his downfall, as here it gets reversed twice: first into a rollup, and then, predictably, into a clumsy (Ranallo: “a modified…”) Salida Del Sol.

Jericho adopts the role of Rumble/RAW recapper here on his Highlight Reel, as if the already 12+ minutes devoted to recaps in this show barely halfway through wasn’t enough to get people up to speed. Telling and showing, a gutsy move.

Again starkly accentuating the fact that Important People Don’t Come To SmackDown, Jericho hosts the two members of the triple threat at Fast Lane who are mandated to work Thursdays: Roman Reigns and Dean Ambrose. Dean brings an ostentatious orchid to the ring, in a pot, which leaves Roman making the most comically baffled face I’ve ever seen. He presents it to Jericho as a gift to “jazz (his) set up”. I guess it’s another indication that Dean is crazy. But orchids are my favourite flowers, and wrestlers with flowers is one of my true real deep passions in life, so I’m just going to take it for the weird and uncharacteristic taste of tenderness that maybe it was.

There’s some dickwaving between the Shield boys, a lot of “are you gonna hit me there? I’m gonna hit you right there,” and “I’m gonna beat you real good, son” with a tonne of eyebrow waggling and unbearable homoerotic tension, which is becoming so uncomfortable with cool Dad Jericho just twinkling awkwardly in between them, so I’m almost grateful when the Wyatts interrupt to be enigmatic.

You may or may not know a secret: I sometimes moonlight as a NJPW reviewer right here at Voices of Wrestling. It’s not often these spheres of writing intersect—and they barely do here, as I’ve only ever reviewed B-shows which Styles was far too important for, and the Tag League where he barely stumbled through two matches before ditching the tournament to nurse a back injury. For that reason, the entirety of my dedicated AJ Styles writing thus far in my wrestling journalism career comes down to this excerpt from a multi-man tag match review on the 21st November last year:

“AJ’s hat hair is off the charts here; it’s got a kink in it which I’m not sure could be removed by even the most professional of ceramic straighteners.”

Fortuitously, I think this line is evergreen.

This match was set up because, in Axel’s words: “AJ styles just came and, he deliminated me, from behind!” It’s still incredibly surreal seeing Styles looking fresh off the bus from Japan, flinging Pele kicks over his shoulder and landing from dropkicks in a perfect genuflect.

Shockingly, Styles gets the win here with the Styles Clash, leaving Axel’s body limply dangling from his shoulders for a pregnant pause, til Styles methodically steps his feet into place, and slams Axel to the mat. This is probably the only finisher in WWE that has made me gasp with excitement for quite some time. There was speculation that the Clash was going to be like Itami’s G2S: hotly anticipated and never delivered (on TV), to build bubbling anticipation for months. In a way, though, doesn’t it make perfect sense to start getting decisive wins with a deadly tool immediately? It’s thrilling to see an important debut on a Thursday. This feels much much more significant than any amount of US Championship trading.

Big fan of Natalya’s practical high ponytail here, a rare WWE women’s hairstyle that doesn’t turn into a muddle of extensions during every forward roll. Natalya does her one sequence of technical wrestling that she can do, which is always very fun, culminating in the stomp on Charlotte’s back as she hunches, seated, and the basement dropkick. It’s a fun showcase, but Natalya is terrible at making anything seem urgent or important or like she actually wants to have a fight, rather than just smile winningly and wink after she’s locked in an abdominal stretch. Ric Flair is here, being aggressively awful to Natalya but stopping short of actually physically forcing himself on her, thankfully.

Charlotte gets the win the Figure Eight and keeps it locked in too long after the bell, which prompts old friend Becky Lynch to make the save. Ranallo begins explaining how Natalya and Lynch have worked together for years; wrestled side by side in indie promotions in Canada, and Lawler yells for the second time tonight “FORGET ALL THAT, IF IT DIDN’T HAPPEN IN THE WWE, IT DIDN’T HAPPEN,” which is so mind-bogglingly counter-productive I don’t even know what to say. He adds “Becky Lynch has just got DADDY ISSUES” for good measure.

Hey look, it’s the ill-fated Night of Champions tag-team combo, that didn’t succeed then in this exact same match-up, so why would it succeed now? Looks like it’s water under the bridge for the Shield boys and Jericho; perhaps all mended via orchid. I really want to enjoy this match, but Jericho’s knife-edge chops look more like, I don’t know, what’s a less threatening piece of cutlery? An egg spoon?

This match isn’t exactly blazing along when Erick Rowan decides to slow things right down. The whole match feels like a slog, which is why when Roman gets his by-numbers hot tag it’s a welcome injection of offence. He has Luke Harper down for 2.99 before Braun tears Roman’s legs off and there’s a DQ brawl.

The whole Wyatt family have Roman vulnerable and distressed, when the Big Show comes out to save him. Show attempts to dispatch the entire Wyatt family. It doesn’t go well, but at least he tried.

I rate this match the feeling of seeing someone you thought you knew, in crowd– maybe an old lover you shared a passionate weekend with once in St Ives. Her hair’s glossy; her icy gaze more attractive than ever; her cheeks flushed. You wave, eyebrows raised hopefully, desperate to make eye contact and perhaps rekindle those feelings—but the Big Show crosses your path, obscuring your vision of each other, and when you finally get around him—she’s gone. 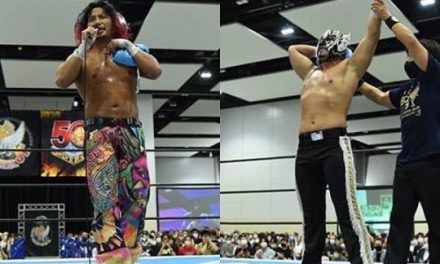